The monkeypox virus may be mutating more than expected, according to researchers in Portugal, as cases rise across Britain and the US, and is detected for the first time in Taiwan and Colombia.

Scientists said the latest strain of monkeypox, once previously confined to parts of Africa, has about 50 genetic variations compared to related viruses that circulated in 2018-2019. They found the virus is continuing to evolve during the current outbreak, including a number of small changes in the genetic code, minor gene variants and a deleted gene, according to a study published in Nature Medicine on Friday. 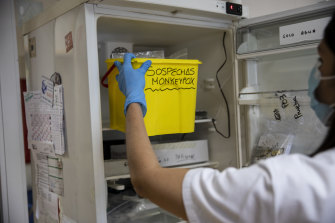 A technician takes a bucket with suspected monkeypox samples to be tested at the microbiology laboratory of La Paz Hospital in Madrid, Spain.Credit:Getty Images

“It was quite unexpected to find so many mutations in the 2022 monkeypox virus,” said Joao Paulo Gomes from the National Institute of Health in Lisbon and one of the authors of the report. “In fact, considering the genome characteristics of this type of virus, no more than one or two mutations are likely to emerge each year.”

The monkeypox virus is more stable and slower to mutate than the coronavirus that causes COVID-19. In the past, monkeypox hasn’t spread easily from person to person. It’s still unclear how the mutations seen in the current virus might change any of those attributes, or the severity of the disease it causes. More research is needed to better understand the changes in the virus, the researchers said.

A cousin of the smallpox virus, monkeypox typically causes flu-like symptoms, followed by a rash that often starts on the face and spreads down the body. The illness can be deadly in some instances. Many of the current cases are primarily among men who have sex with men.

Authorities all over the world are tracking the evolution of the outbreak and expanding vaccination to more at-risk groups to try to contain the spread. More than 3300 cases have been reported globally.

The emergency committee of the World Health Organisation is expected to announce soon whether it will declare the latest outbreak a public health emergency of international concern – its highest alert level.

The World Health Network, a global collaboration of scientific and citizen teams, declared it a pandemic on Thursday.

The US Centres for Disease Control and Prevention, which is looking to expand the use of the monkeypox vaccine for children, said the virus was behaving as expected in the US.

“We’re sequencing all specimens that we can get our hands on,” Gregory Armstrong, director of the CDC’s Office of Advanced Molecular Detection within the National Centre for Emerging and Zoonotic Diseases, said on Thursday. Thus far, the CDC was getting its specimens from public health labs, he said.

“All the evidence so far suggests the virus is behaving as we anticipated,” he said. “It’s much more stable than most viruses, and we don’t anticipate that it’s going to be mutating at the rate of SARS-CoV-2.”