California declares statewide emergency: More than 180,000 people ordered to flee their homes as ‘historic, extreme winds’ continue to fan fires, and power is shut off to 2.3 million people to prevent it spreading

Authorities in Northern California ordered 180,000 residents to flee their homes on Sunday as historic winds fueled a wildfire in the wine country and led the state’s biggest utility to shut off power for millions of people in an effort to prevent more fires.

The fear that the winds could blow embers and spread fire across a major highway prompted authorities to expand evacuation orders that covered parts of Santa Rosa, a city of 175,000 that was devastated by a wildfire two years ago.

California Governor Gavin Newsom of California declared a state of emergency on Sunday. He said the high winds fueling the blazes were ‘unprecedented’.  He also pledged to deploy ‘every resource available’.

‘This is the largest evacuation that any of us … can remember,’ the Sonoma County Sheriff’s Office tweeted Sunday morning. ‘Take care of each other.’ 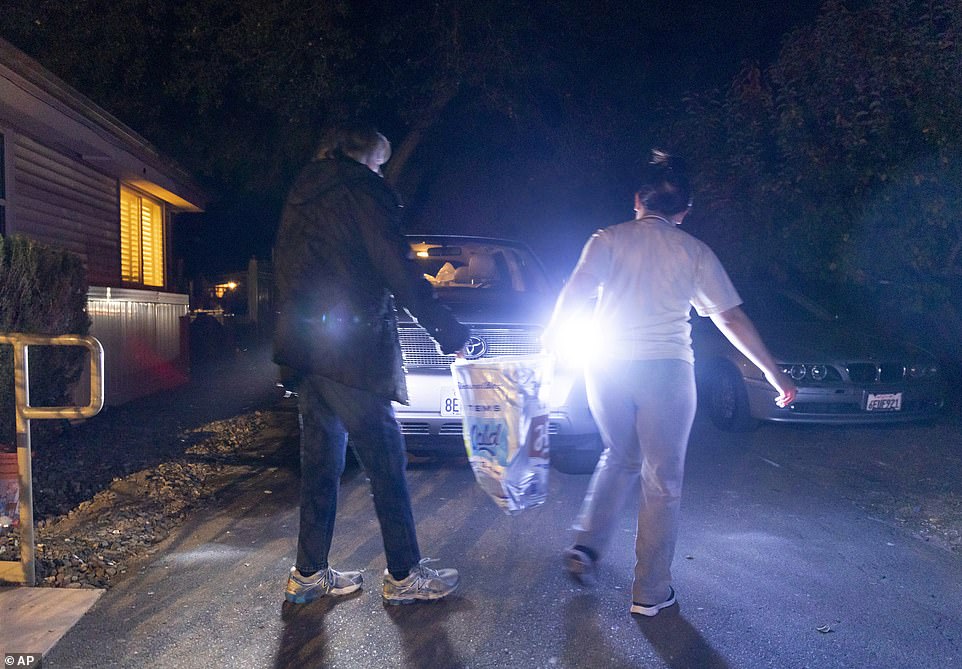 Two people evacuate Redwood Retreats, a residential care facility in Santa Rosa on Saturday. About 90,000 residents were ordered to evacuate towns near a massive Northern California wildfire Saturday, and the state’s largest utility began power shut-offs for an estimated 2.35 million people due to forecasts of severe winds and extreme fire danger 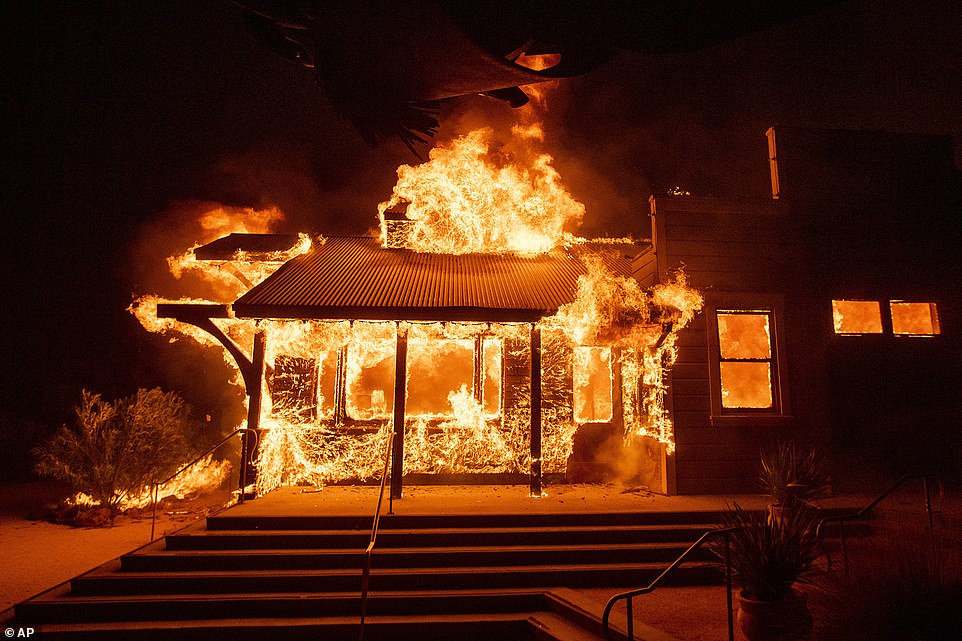 Flames from the Kincade Fire consume Soda Rock Winery on Sunday. Two previous blackouts in recent weeks were carried out amid concern that gusty winds could disrupt or knock down power lines and spark devastating wildfires 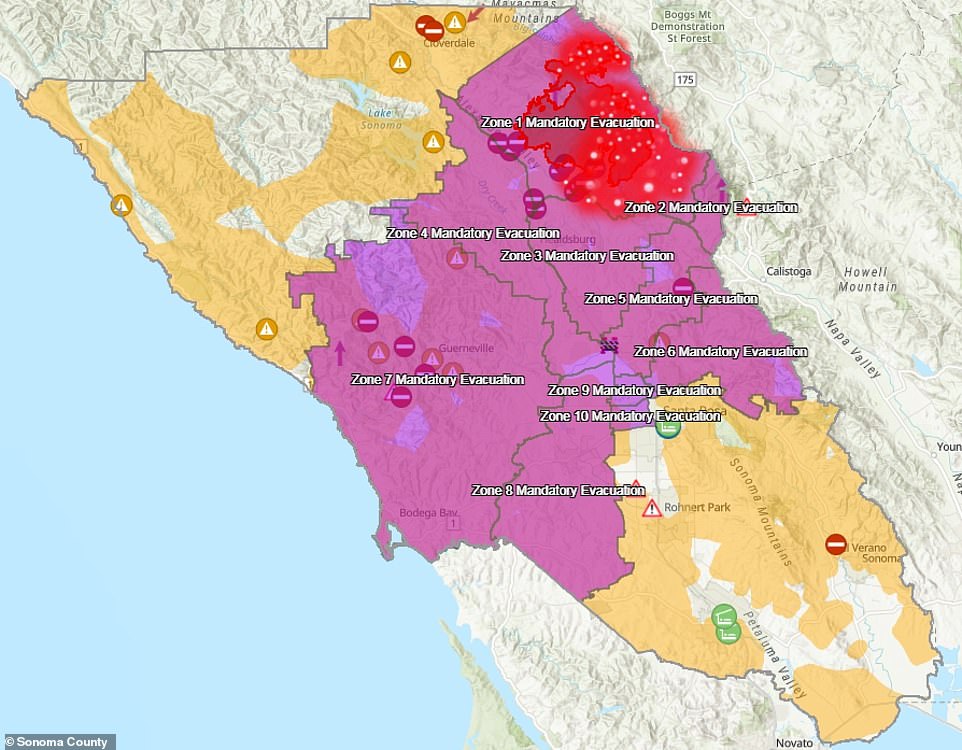 The new evacuation order encompasses a huge swath of wine country stretching from the inland community of Healdsburg west through the Russian River Valley and to Bodega Bay on the coast, Sonoma County Sheriff Mark Essick said

Hundreds of people arrived at the Sonoma County Fairgrounds in Santa Rosa throughout the night and into Sunday morning. Some came from senior care facilities. More than 300 people slept inside an auditorium filled with cots and wheeled beds. Scores of others stayed in a separate building with their pets.

Among them was Maribel Cruz, 19, who packed up her dog, four cats and fish as soon as she was told to flee from her trailer in the town of Windsor, which is about 60 miles north of San Francisco. She also grabbed a neighbor’s cat.

‘I’m just nervous since I grew up in Windsor,’ she said. ‘I’m hoping the wind cooperates.’

Two fires are now bordering Northern and Southern California. NBC reported that the winds had reached ‘hurricane levels’, making it harder to contain the fire.

About 90,000 residents were already under a mandatory evacuation order Saturday night that encompassed a huge swath of wine country stretching from the inland community of Healdsburg west through the Russian River Valley and to Bodega Bay on the coast, Sonoma County Sheriff Mark Essick said.

The sheriff pleaded with residents in the evacuation zone to get out immediately, citing the 24 lives lost when fire swept through the region in October 2017. He thanked residents for heeding his call and praised the smooth exodus.

‘Although I’ve heard people express concerns that we are evacuating too many people, I think those concerns are not valid at this point,’ Essick said, noting that the winds pushed fire toward the towns of Healdsburg and Windsor overnight. 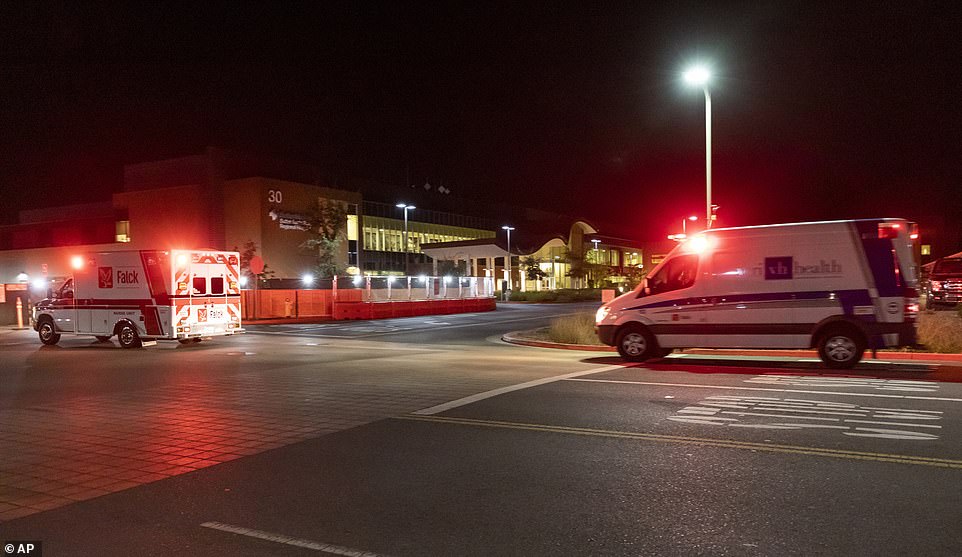 Ambulances arrive at Sutter Santa Rosa Regional Hospital to evacuate patients in Santa Rosa. Pacific Gas & Electric said a new wave of blackouts started Saturday evening, affecting about 940,000 homes and businesses in 38 counties for 48 hours or longer. The city of San Francisco was not in line for a blackout; shut-offs were ordered for most of the rest of the San Francisco Bay Area, the wine country to the north and the Sierra foothills

The Healdsburg area lost one of its historic attractions to the flames Sunday when embers carried by the winds sparked a blaze that engulfed the Soda Rock Winery whose buildings included a general store and post office founded in 1869. The winery was about 10 miles outside the town of Healdsburg.

The Kincade Fire began Wednesday night and is only 10 percent contained, the California Department of Forestry and Fire Protection said Sunday. It grew by almost 4,000 acres overnight to 30,000 acres and has destroyed 79 structures.

Fire officials said about 30,000 firefighters took an aggressive stance overnight to keep the fire from spreading.

The fire was expected to be especially unwieldly Sunday due to powerful winds gusting at up to 80mph on hillsides. The wind event was expected to last until Monday, the National Weather Service said.

Fire officials said the winds could potentially spark spot fires up to a mile away and quickly explode. They feared that if it crosses U.S. 101, the fire could spread westward to an area that hasn’t had a fire in 80 years.

‘The fuel in that area is extremely dense, they’re extremely old and dry,’ said Steve Volmer, a fire behavior analyst with CalFire.

Meanwhile, another blaze erupted Sunday on both sides of a San Francisco Bay Area freeway and quickly spread, coming dangerously close to homes in Vallejo, which is 55 miles south of Geyserville where the massive Kincade Fire is burning.

A live broadcast on KGO-TV showed the fire on both sides of Interstate 80 near Vallejo and homeowners using hoses on a hillside to try and fight it. Smoke from the wildfire forced a freeway to close and the evacuation of California State University Maritime Academy.

To the south, a wildfire dubbed the Tick Fire destroyed 18 structures Thursday in the Santa Clarita area north of Los Angeles. Nearly all the 50,000 residents ordered to evacuate were allowed back home after Santa Ana winds began to ease.

‘I’m thankful that nothing happened to my house, but I feel bad for my neighbors,’ Briano, 71, said Saturday.

As of Sunday, the Tick Fire was 65 percent contained. 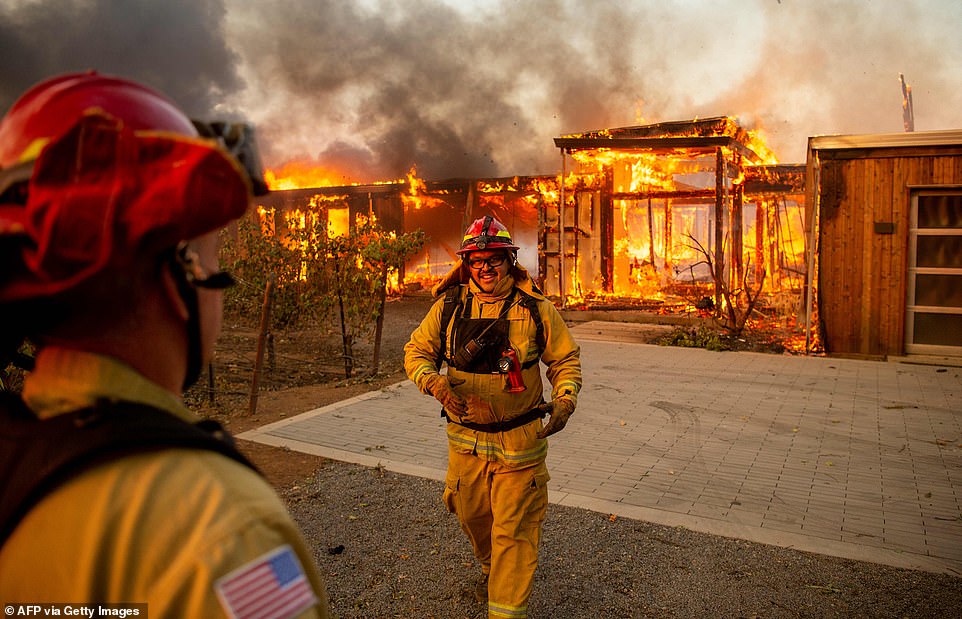 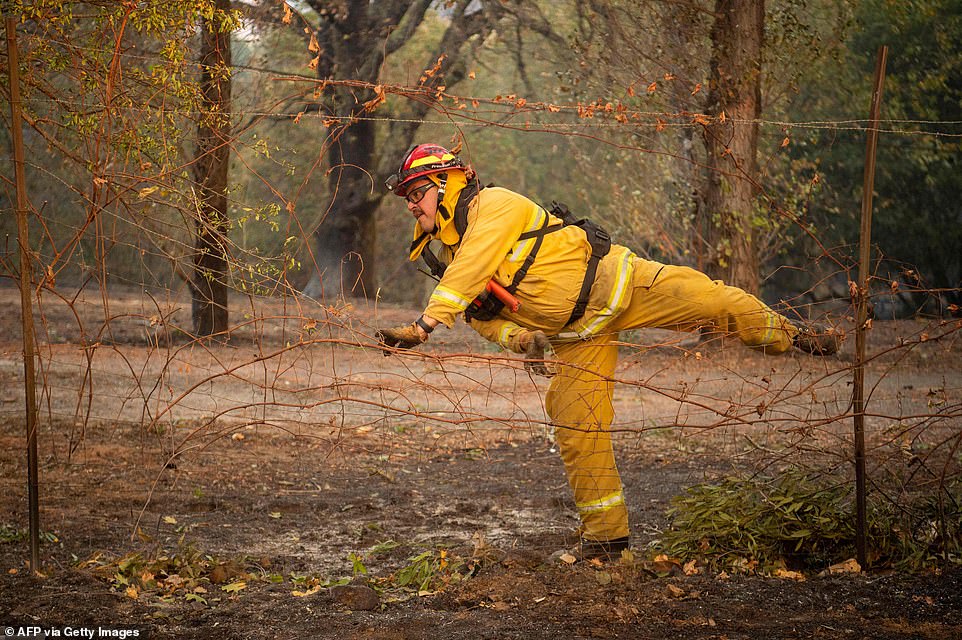 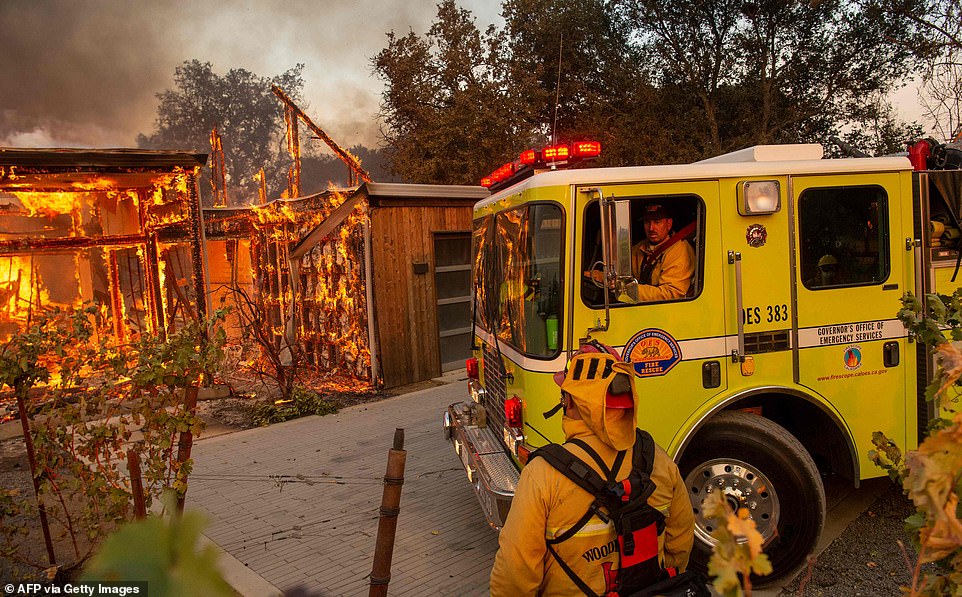 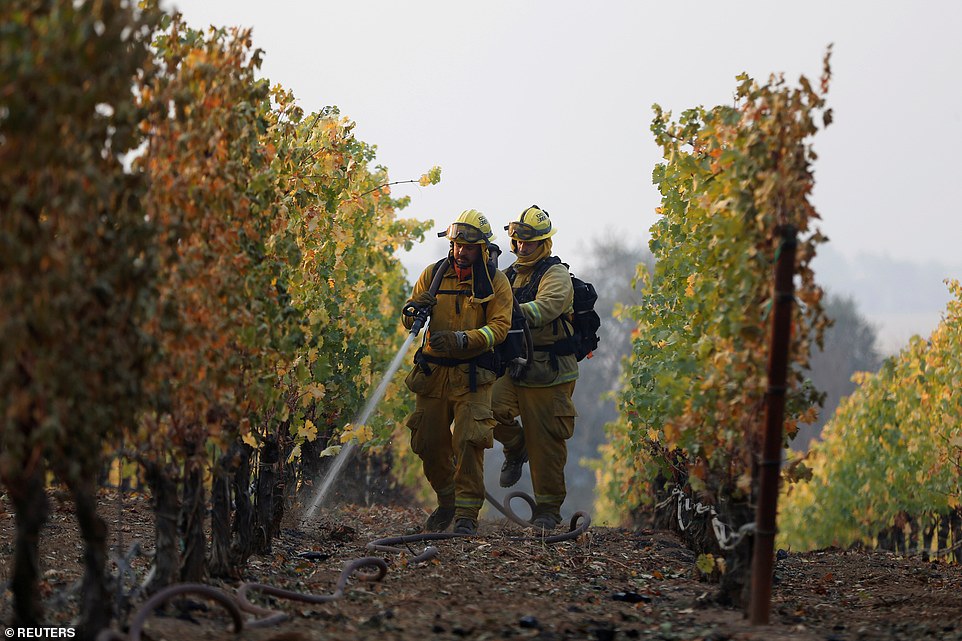 What sparked the current fires is unknown, but Pacific Gas & Electric said a 230,000-volt transmission line near Geyserville malfunctioned minutes before that blaze erupted Wednesday night.

The possible link between the wine country fire and a PG&E transmission line contained grim parallels to last year when most of the town of Paradise burned, killing 85 people in the deadliest U.S. blaze in a century.

PG&E said this weekend’s shut-off was affecting about 940,000 homes and businesses – affecting 2.3 million people. The city of San Francisco was not in line for a blackout amid shut-offs for most of the rest of the San Francisco Bay Area, the wine country to the north and the Sierra foothills.

Many residents facing blackouts had barely recovered from a previous shut-off.

Northeast of Sacramento, Scott Paris estimates about $20,000 lost in shutting down his High-Hand Nursery and Cafe when PG&E cut the power earlier this month for about 24 hours during a weekday. A beautiful fall Sunday might bring $50,000 to $60,000 worth of business.

‘If this is the new normal, it’s going to drive up a lot of costs,’ he said. 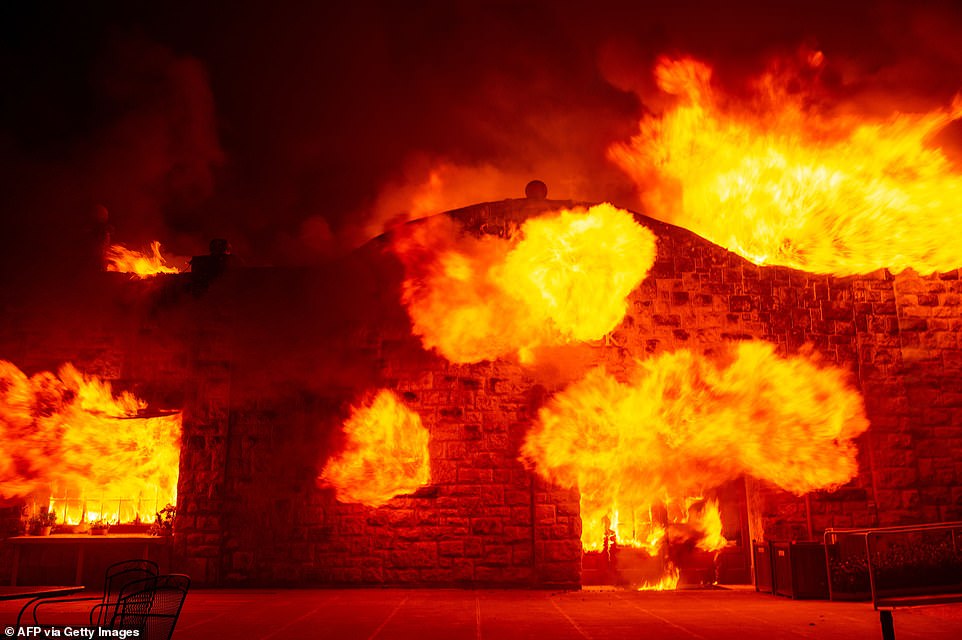 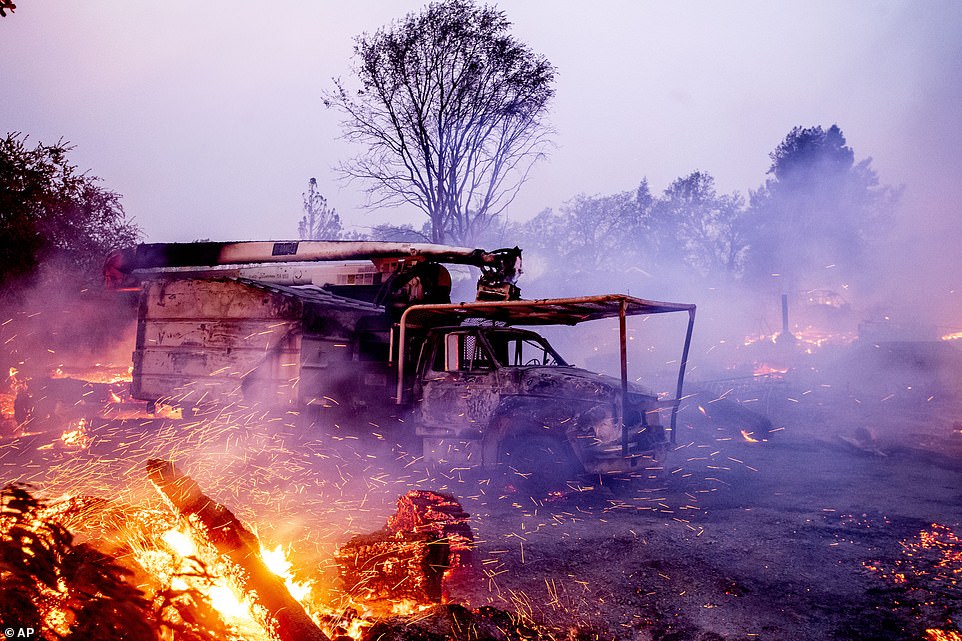 Flames from the Kincade Fire consume a truck in Healdsburg. The possible link between the wine country fire and a PG&E transmission line contained grim parallels to a catastrophic fire last year that tore through the town of Paradise, killing 85 people and destroying thousands of homes in the deadliest U.S. fire in a century 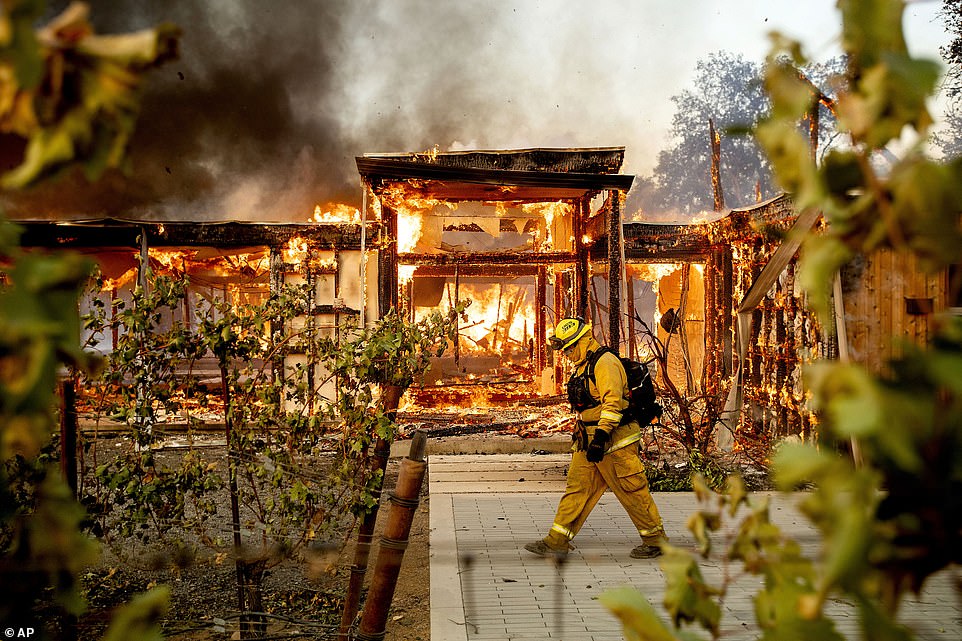 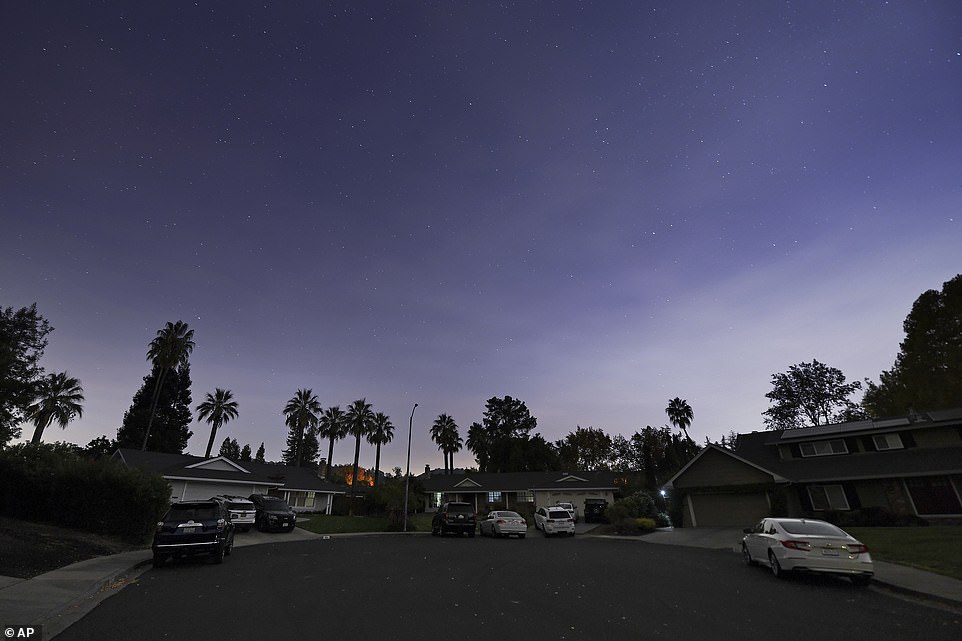 Stars can be seen in the sky as electricity in a neighborhood is turned off during a Pacific Gas & Electric outage in Walnut Creek on Saturday. A Northern California blaze forced evacuation orders and warnings for nearly all of Sonoma County stretching to the coast, with forecasts of strong winds prompting officials to start cutting electricity for millions of people in an effort to prevent more fires 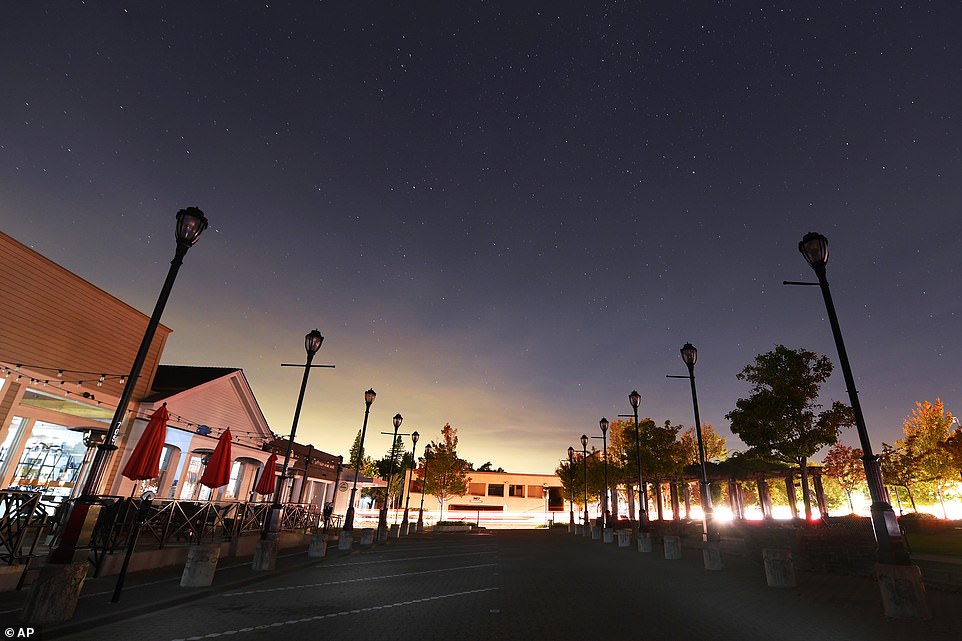 Street lights have no electricity during a Pacific Gas & Electric outage in Lafayette on Saturday. Pacific Gas & Electric said a new wave of blackouts started Saturday evening, affecting about 940,000 homes and businesses in 38 counties for 48 hours or longer. The city of San Francisco was not in line for a blackout; shut-offs were ordered for most of the rest of the San Francisco Bay Area, the wine country to the north and the Sierra foothills

The wind event will peak early Sunday and is likely to be the strongest in several years, said PG&E meteorologist Scott Strenfel.

‘It’s likely that many trees will fall, branches will break,’ raising the risk of damage to utility infrastructure, Strenfesl said at a Saturday evening briefing. Relative humidity will dip into single digits, he said.

A wildfire Thursday destroyed 18 structures in the Santa Clarita area north of Los Angeles and led to evacuation orders for up to 50,000 residents, although nearly all were allowed back home after Santa Ana winds began to ease.

Sheriff’s officials said human remains were found within the wide burn area, but it’s too soon to know if the death is connected to the blaze.

To the north, firefighters raced to make progress against a blaze near Geyserville in Sonoma County before ferocious ‘diablo winds’ returned. The Kincade fire had burned 77 buildings, including 31 homes, and swept through more than 40 square miles of the wine-growing region. It was just 10% contained by Saturday evening.

A firefighter and two civilians were injured when they were overwhelmed by flames as they tried to evacuate from approaching flames, authorities said.

Sutter Santa Rosa Regional Hospital started evacuating roughly 101 patients Saturday night and bringing them to other facilities, according to a Sutter Health statement.

Several thousand people living in small communities in neighboring Lake County were warned to be ready to evacuate if an order is given. The area was the scene of a 2015 wildfire that killed four people and burned nearly 2,000 homes and other buildings. 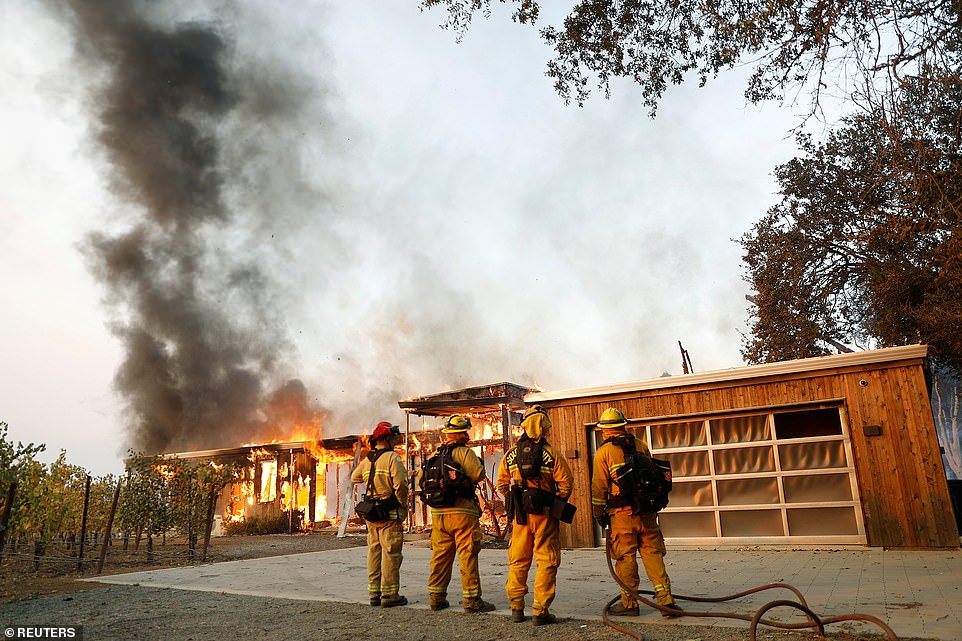 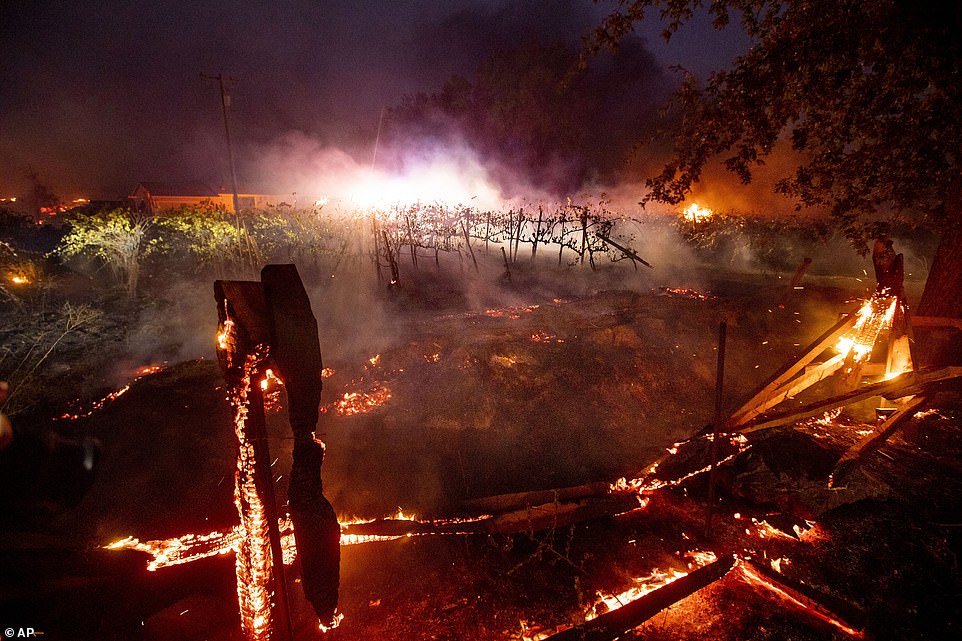 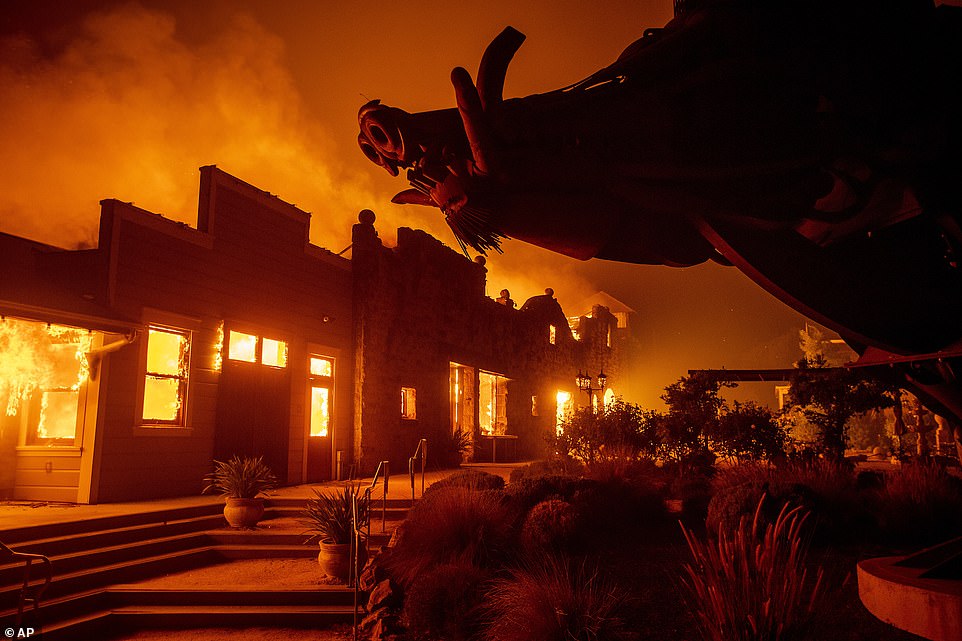 Flames from the Kincade Fire consume Soda Rock Winery on Sunday. A wildfire Thursday destroyed 18 structures in the Santa Clarita area north of Los Angeles. To the north, firefighters raced to make progress against a blaze near Geyserville in Sonoma County before ferocious ‘diablo winds’ returned. The Kincade fire had burned 77 buildings, including 31 homes, and swept through more than 40 square miles of the wine-growing region 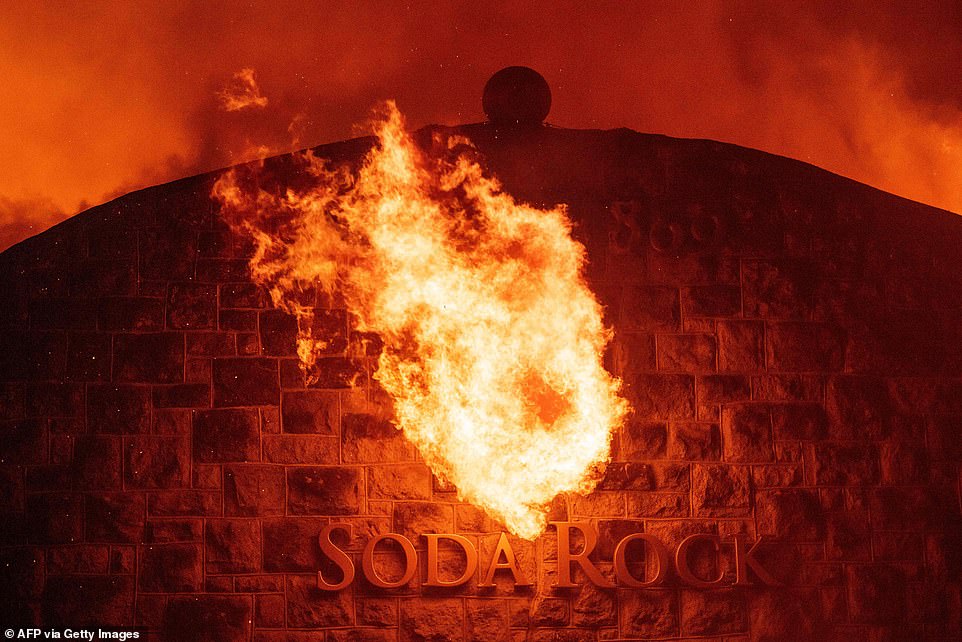 Flames shoot out a window as the Soda Rock Winery burns during the Kincade fire on Sunday. Powerful winds are fanning wildfires in northern California in ‘potentially historic fire’ conditions, authorities said 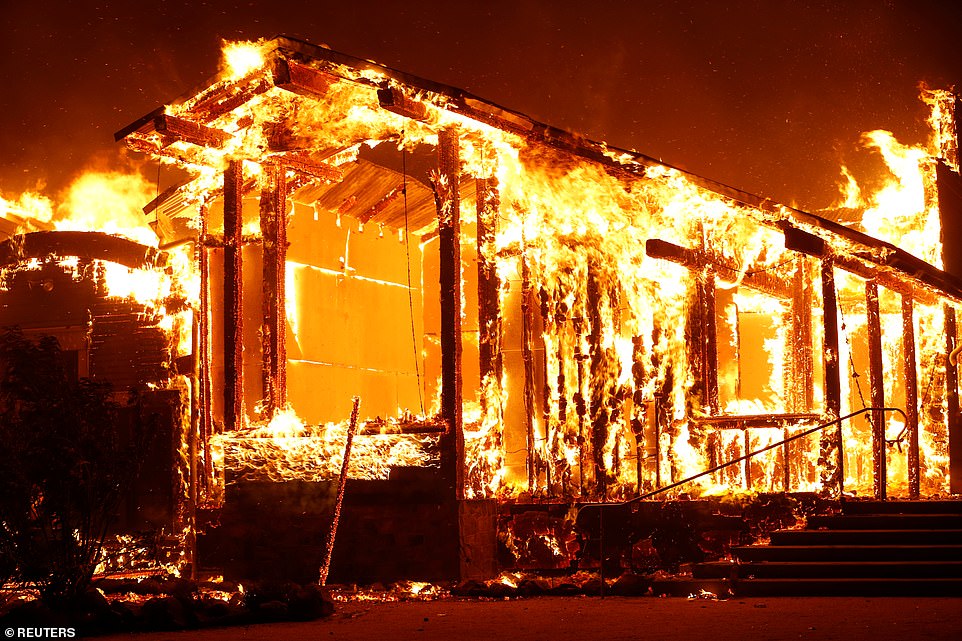 The wind driven Kincade fire burns near the town of Healdsburg. No cause has been determined for any of the current fires, but PG&E said a 230,000-volt transmission line near Geyserville had malfunctioned minutes before that fire erupted Wednesday night

Across the border, Mexican authorities said three people have died in wind-whipped wildfires in the northwestern state of Baja California.

Mexico’s civil defense agency said Friday that fires near Tecate, near Tijuana and between the coastal towns of Rosarito and Ensenada had forced 1,645 people to evacuate their homes.

In Marin County, just north of San Francisco, the sheriff’s office warned that a power shut-off would likely knock out some traffic lights. Intersections with inoperable lights should be treated as a four-way stop, the office said.

Even before the new blackout order, the University of California, Berkeley announced it was canceling all Saturday afternoon classes, as well as other indoor events and activities scheduled through Sunday.

A Florida utility, Florida Power & Light, announced it was sending 100 line workers and support staff to help PG&E restore power to areas with outages caused by the wildfires.

How the UK's coronavirus battle plan could affect YOU