Morrisons has become the first UK supermarket to commit to keeping junk food multibuy deals after the Government’s proposed ban was dramatically put on hold.

The supermarket chain says it will continue to offer deals on so-called ‘HFSS’ – high in fat, salt or sugar – foods to help customers battle the current cost-of-living crisis.

The Government had hoped to slap a ban on supermarkets offering ‘unhealthy’ volume promotions in stores as part of its plans to tackle the UK’s obesity crisis.

The scheme has been a personal crusade of Boris Johnson’s who himself has been on a battle to lose weight following his near-death run-in with Covid in 2020 – which he put down to being ‘too fat’.

But the Prime Minister last week slammed the brakes on plans to ban HFSS multibuy deals due to the growing cost-of-living crisis – sparking backlash from the likes of celebrity chef Jamie Oliver.

A ban on multi-buy deals for junk food and pre-watershed TV advertising will now be delayed a year to allow officials to assess the impact of such a ban on household finances.

Last week Tesco announced it would continue to push ahead with its own plans to ban HFSS multibuy deals, even with the Government delaying legislation.

And Sainsbury’s said it would follow its original timeline and that it had phased out mutibuy offers in 2016 in favour of ‘regular low prices’.

But today Morrisons became the first major supermarket to announce it would follow the Government in rowing back a ban on multibuy deals.

In a statement to trade magazine, The Grocer, a spokesperson said: ‘The government will continue to permit multibuy deals in light of the cost of living crisis and our approach will reflect this.’ 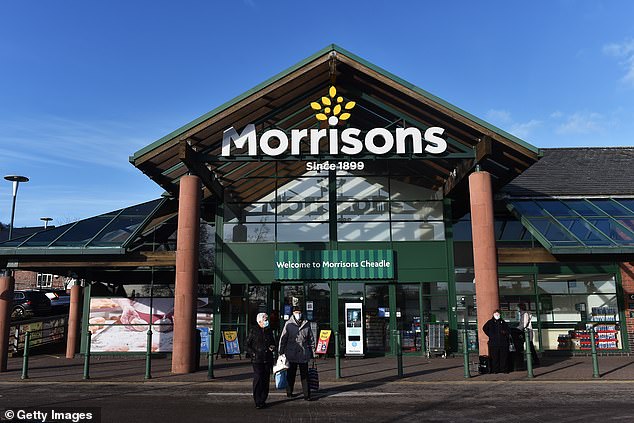 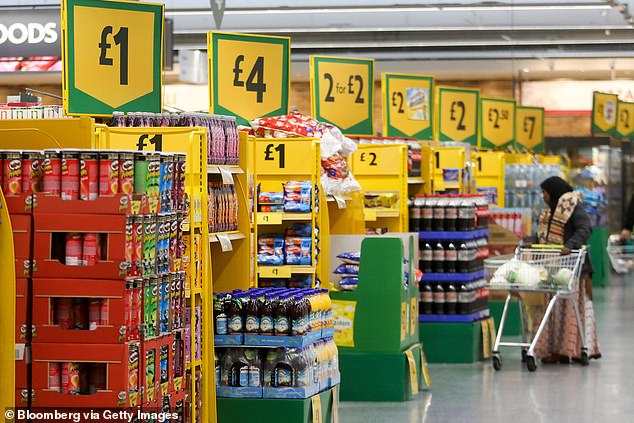 No10’s reversal on a planned ban of ‘buy one get one free’ deals will only worsen the UK’s cost of living crisis, Government calculations suggest.

A Whitehall assessment of the ban — set to come into play this October — found outlawing the promotions would actually save the public £14 a year.

The report, published in 2020, claimed the multibuy promotions encourage households to spend an extra £75 each year.

This was offset by £61 of savings from the discounts of BOGOF deals.

The ban was one of the key pledges of No10’s anti-obesity strategy to encourage Britons to lose weight and save the NHS money.

But the Prime Minister U-turned on the measure, citing the impact they would have on poorer families at a time when many Britons are struggling with rising costs.

Health campaigners have savaged the move, with celebrity chef Jamie Oliver saying it was a ‘wasted opportunity’ to tackle obesity.

However, some Tory MPs, who were unhappy with the planned ban as a ‘nanny-state’ measure welcomed Mr Johnson’s announcement.

It comes after the Government announced last week it would delay plans to introduce a ban on its crackdown on HFSS foods.

Britain has one of the highest obesity rates in Europe, with two in three adults now considered overweight or obese.

Shock figures released earlier this month revealed that the NHS is forecast to spend a staggering £10billion a year on treating obesity-related ill health by 2050. It is currently spending around £6billion.

As part of its strategy to tackle obesity in the UK, the Government had planed to ban  two-for-one junk food deals and television ads for it before 9pm.

But ministers said last week that the ban had been deferred so they can review the impact on families amid the cost-of-living crisis.

The announcement sparked fury from health food campaigners, including celebrity chef Jamie Oliver who turned up at Downing Street waving an Eton Mess pudding and demanded the PM push ahead with its ban.

Mr Oliver accused the Government of using families’ suffering amid the cost-of-living crisis as an ‘excuse’ to delay tackling obesity.

However less than 200 people turned up, while poverty campaigners branded his  campaign ‘tone deaf’ with Britons facing rising food and energy costs.

Mr Johnson last week insisted that scrapping HFSS deals would worsen the cost of living crisis by increasing the price of a weekly shop.

And he insisted the Government would not change its mind on delaying the introduction of a ban on buy-one-get-one-free promotions – even if some of the foods are high in fat, sugar or salt.

He said: ‘If people can save on their food bills with some offers then I think we’ve just got to be flexible while continuing to tackle obesity. 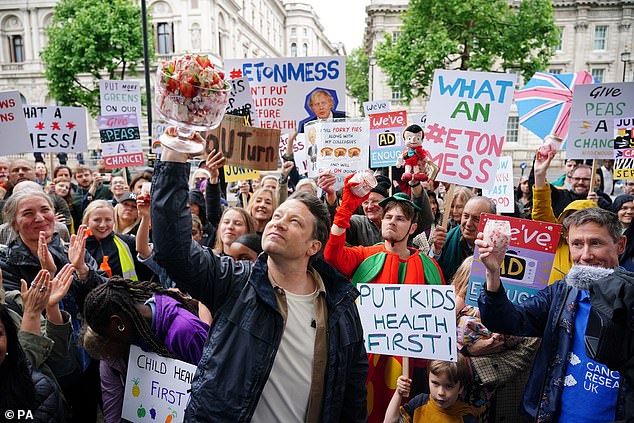 What are the HFSS rules and why are they coming in?

Up until last week ministers had been preparing to bring in new legislation in October to tackle childhood obesity in the UK.

The Government wanted had planned to ban ‘buy one, get one free’ (BOGOF) and three-for-two deals for unhealthy foods and junk food adverts before the 9pm watershed.

Under a wider strategy announced in July 2020, shops and supermarkets were also required to remove foods high in fats, sugar and salt from prominent places, such as by the checkouts or near entrances.

It follows on from the introduction of a sugar tax in 2018.

Manufacturers of soft drinks containing more than 5g of sugar per 100ml have been made to pay a levy of 8p a litre to the Treasury, or 24p a litre for sugar content over 8g per 100ml, since the tax came into force in April 2018.

The anti-obesity strategy is considered a personal crusade for the Prime Minister, who lamented that he was ‘too fat’ when he was struck down with coronavirus in April 2020.

But the plans to ban HFSS multibuys were put on hold for a year this week, to allow the Government to assess the impact on shoppers facing a cost of living crisis.

‘We understand the vital importance of tackling obesity, it costs the NHS huge sums of money. People feel healthier, happier, their quality of life is much, much better if they lose weight, speaking entirely personally.

‘There are lots of things you’ve got to focus on, including diet, eating less, eating less is the most important thing, but there are some things at the moment where we think they make very little difference to obesity’.

The Department of Health and Social Care (DHSC) said the ban on multi-buy promotions will now come into effect in October 2023, while the bar on TV adverts before 9pm is delayed to January 2024.

‘We’re committed to doing everything we can to help people live healthier lives,’ she said.

‘Pausing restrictions on deals like buy-one-get-one-free will allow us to understand its impact on consumers in light of an unprecedented global economic situation.’

Industry body the Food and Drink Federation welcomed the ‘pragmatism’ of the Government’s action.

Kate Halliwell, its chief scientific officer, said: ‘At a time when both families and our manufacturers are struggling with high inflation, it makes sense to delay the restrictions on volume promotions for everyday food and drink products, including breakfast cereals, ready meals and yoghurts, as it risked further stretching already-pressed household budgets.

‘We also welcome the delay to the start of advertising restrictions, given the time it will take our industry to prepare for the change in law.’

The DHSC said restrictions on the placement of less healthy products in stores and supermarkets will still come into force this October as planned.

While You Were Sleeping: 5 stories you might have missed, Dec 3