Mother, 31, is slapped with £60 parking fine after she overstayed the 90 minute limit in Home Bargains car park because she was breastfeeding

A mum has been slapped with a £60 fine for going over her allotted parking time outside a Home Bargains because she was breastfeeding her baby.

Katie Sim, 31, was visiting the discount store in South Shields in September, but was unaware that its car park had time restrictions in place.

She unknowingly stayed 45 minutes beyond the 90-minute time limit as she was breastfeeding her four-month-old son Bobby.

Despite appealing the fine and explaining the circumstances, though, Ms SIm was left furious at the manner in which the parking company initially dismissed her appeal. 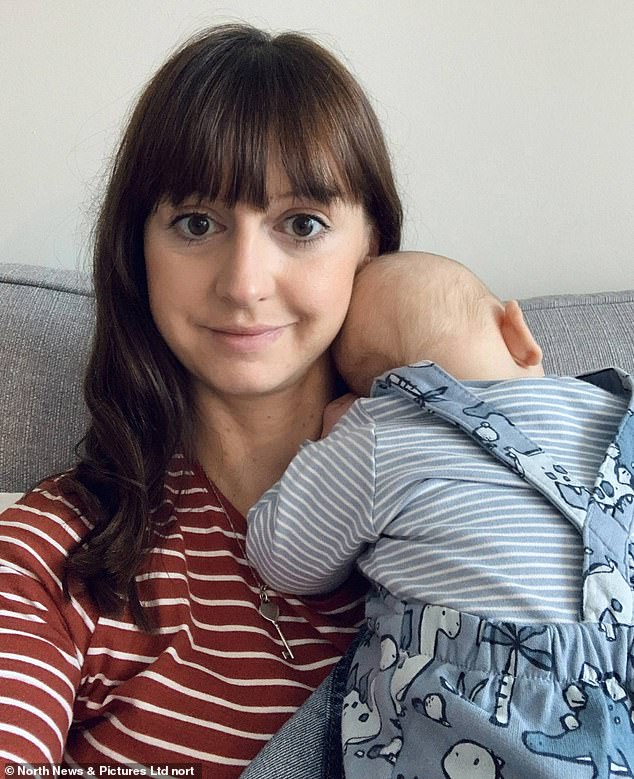 Katie Sim, 31, was fined £60 by ParkingEye after staying beyond the parking time limit outside a Home Bargains store in South Shields because she was breastfeeding her four-month-old son 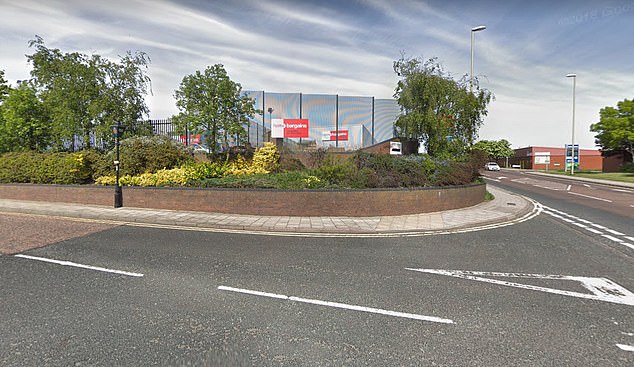 The Home Bargains store in South Shields. ParkingEye operates the car park outside the discount store

ParkingEye, who operate the car park, has since cancelled the fine ‘as a gesture of good will’ after first claiming that her reasoning did not fit their appeal criteria.

The parking operator has been the focal point of annoyance for many drivers who claim they have been unfairly ticketed.

A furious father claimed he was given a £70 parking fine by ParkingEye after being stuck in a queue waiting to get out of a hospital car park for 45 minutes – having just taken his one-year-old son to be treated for a broken leg.

The same company insisted on fining a company director £20 even though she was having an NHS scan at the time and patients were allowed to park fore free in 2019.

Ms Sim said she found ParkingEye to be ‘very disrespectful’.

She added: ‘I was really upset with their response after I explained the circumstances.

‘The signage was poor and I didn’t know there was a restricted time to stay but the way they worded the appeal upset me the most and I found it very disrespectful.

‘There’s nothing more important than feeding your child. Bobby is my second child I’ve breastfed and I think there’s still a stigma around breastfeeding in public.

‘I know a lot of people who feel reluctant to breastfeed in public but I think it’s important to have support out there and not feel embarrassed to do it if needed.’

ParkingEye’s catalogue of controversy, from fining a dying cancer patient with a Blue Badge to billing a pensioner £70 for missing one digit of her registration number

ParkingEye has repeatedly caused controversy, with many drivers saying they have been unfairly ticketed.

A furious father claimed he was given a £70 parking fine after being stuck in a queue waiting to get out of a hospital car park for 45 minutes last year.

Scott Michael Clarke, 31, from Sleaford, Lincolnshire, paid £1.70 to park outside Lincoln County Hospital and take his one-year-old son to a routine one hour appointment after he had broken his leg in a fall.

The family made it back to their car with 30 minutes to spare – but traffic in the car park meant it was another 45 minutes before they managed to exit and have their number plate recorded by the automatic cameras.

ParkingEye a volunteer ambulance service driver £70 even though she was picking up a patient as part of her duties in August 2019.

Julie Hyde, 62, from Allenby in West Cumbria, parked her Volkswagen Tiguan in a reserved bay at the Freeman Hospital in Newcastle after checking with reception staff she was allowed to do so.

She helped the wheelchair user into her car and drove 80 miles back to the patient’s home in Cumbria, but received a letter from ParkingEye three days later demanding £40 within two weeks or the figure would be increased to the full amount.

The firm later cancelled the fine.

In July 2019, a terminally ill man was twice fined while also visiting Lincoln County Hospital despite cancer patients being entitled to free parking.

Edward Sutton, 79, who was diagnosed with lung cancer in November 2018, eventually had the fine overturned on appeal, Lincolnshire Live reported.

ParkingEye is one of the biggest private parking company’s in Britain and operates 3,500 sites nationwide

In May 2019, 79-year-old Irene Smith was fined £70 for parking outside an Aldi where she was shopping despite inputting her details into the ParkingEye machine.

It later emerged she had missed one digit, according to a screenshot from the company.

Holly Edwards, 34, received a £100 fine for parking outside an NHS clinic even though she was having a scan at the time and was allowed to park for free.

She was confident about getting the fine – at the Harold Wood Polyclinic in Romford, east London, in June 2019 – overturned and sent ParkingEye her GP appointment note.

However, the company director was shocked to get a letter back offering a reduced fine ‘as a gesture of goodwill’.

Some drivers, though, have succeeded in turning the tables against the parking giants.

In 2017, top lawyer Nicholas Bowen won a high-profile court victory against the firm after they fined him £85 for overstaying the two-hour time limit at a motorway service station.

A judge struck out the case and ordered the company to pay his costs of £1,550.

Marilyn Heald paid 50p to park for 30 minutes when she went for a simple X-ray – but it nearly cost her £70.

The retired British Airways stewardess was given a penalty for overstaying by just 13 seconds at the Samuel Johnson Community Hospital in Lichfield, Staffordshire.

A spokesperson for Parkingeye confirmed it had cancelled the charge.

They added: ‘The car park at Home Bargains in South Shields is monitored by ANPR camera systems and has prominent and highly-visible signs throughout displaying the terms and conditions of the parking facilities.

‘The motorist parked for longer than the maximum stay period of 1 hour and 30 minutes and therefore received a Parking Charge Notice.

‘However, following a review of the circumstances we have cancelled the charge as a gesture of good will.

‘Parkingeye operates a BPA (British Parking Association) audited appeals process, which motorists can use to appeal their Parking Charge Notice.

‘If anyone has mitigating circumstances, we would encourage them to highlight this by appealing. All motorists are also entitled to a further appeal via POPLA, the independent body which reviews all cases.’

1 – Check if the company who fined you is accredited by the British Parking Association or the International Parking Community by checking the member lists on their websites. If they are not they won’t be able to get your name and address from the DVLA.

If you get the letter from a company that does not belong to either of the above organisations, then they have got your address so you should reply. However, you can write to the DVLA to make sure they have not got your details illegally.

2 – Write to the parking company to appeal the ticket, including any evidence you have that it was wrongly issued. This could include a valid pay and display ticket, photos of signs that are hard to see or misleading, permission from the landowner or a letter from a witness who can confirm what happened.

According to Citizens Advice, the notice to the vehicle’s owner must be delivered within 14 days after the last day of parking. If it isn’t delivered to you in time, tell the parking company you don’t have to pay the charge.

3 – If you are unhappy with their response then you can appeal to the independent arbitrators. For members of the BPA go to Parking on Private Land Appeals (POPA); for the IPC use the Independent Appeals Service.

4 – If your appeal is rejected then you should pay or the parking company will take you to court. When you can pay you should write that you are ‘paying under protest’ and keep a copy. If you still think you were wrongly fined you can take the firm to small claims court to try and reclaim the money.

Appealing a parking ticket issued by a council is a slightly different process. Visit Citizens Advice for more details and support.