Witnesses testified in a Michigan county courtroom on Tuesday that the mother of Oxford High School shooting suspect Ethan Crumbley sent ominous texts the day of the shooting that left four students dead and seven others injured.

Oakland County prosecutor Karen McDonald charged Jennifer Crumbley, 43, and her husband, James Crumbley, 45, with involuntary manslaughter in December, alleging that their 15-year-old son used a gun his parents purchased for him during the Nov. 30 shooting. Both parents pleaded not guilty at their arraignment and are being held on $500,000 bond each.

Kira Pennock, the owner of a Michigan horse farm who housed two of the Crumbley family’s horses, testified during a preliminary hearing on Tuesday that Jennifer Crumbley texted her before and after the Nov. 30 shooting.

“…Just got to go to my son’s school and meet his counselor. Sh*t day,” Jennifer Crumbley texted Pennock just before 11 a.m. Nov. 30 in a conversation about her horse lesson scheduled for later that day. 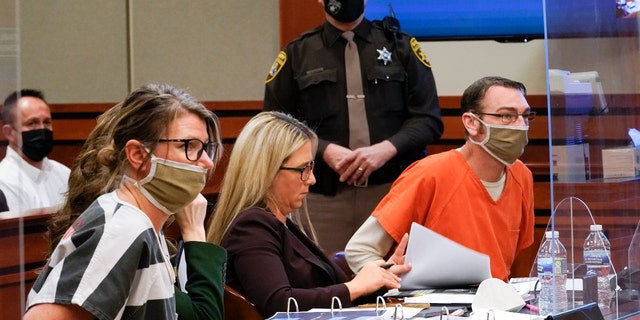 McDonald revealed in January that school officials met with Ethan Crumbley and his parents to discuss violent drawings he made just hours before the deadly rampage.

The 15-year-old suspect was able to convince school officials during the meeting that the concerning drawings were for a “video game.” His parents “flatly refused” to take their son home, the prosecutor said at the time.

Jennifer Crumbely said in another text to Pennock on the morning of Nov. 30 that she still planned on attending her horse training, saying her son was just going through a “hard time” after the death of their family dog, Tank, and “his friend going away to a treatment facility and who knows what else.” 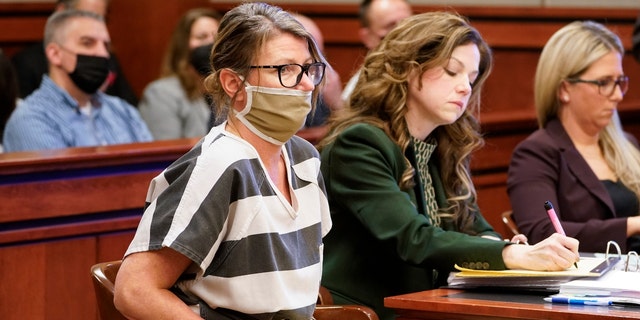 After the meeting, Jennifer Crumbley texted Pennock suggesting she might bring Ethan Crumbley to the horse farm on the afternoon of Nov. 30 after school, saying, “He can’t be left alone.”

The 45-year-old mother shared a photo of a graphic drawing her son made in math class on Nov. 30 with both Pennock and her employer, Andrew Smith, who also testified Tuesday, on the day of the shooting.

“The thoughts won’t stop,” Ethan Crumbley allegedly wrote beneath a drawing of a gun, followed by, “Help me.” Above a drawing of a bullet, the drawing says, “Blood everywhere.” Further down on the page are other handwritten words and phrases including, “My life is useless.” 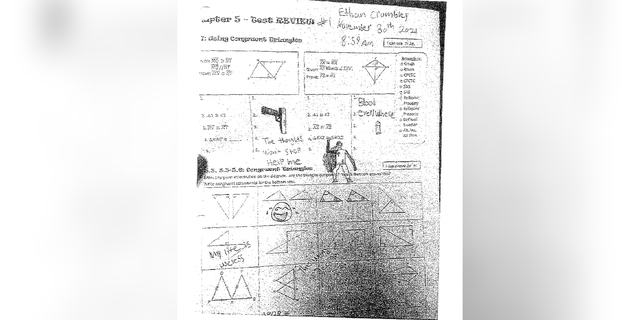 Pennock said she was “alarmed” by the drawing.

Smith, a lawyer for whom Jennifer Crumbley worked as his firm’s marketing director, testified that Jennifer Crumbley notified him the morning of the shooting that she had a meeting with his school counselor and sent a photo of the drawing.

“I have to go to school. Counselor just called. This is what I’m dealing with,” she texted him, along with the photo.

Later that day, when she was back in the office, Smith testified that he heard her scream when she learned of the shooting at Oxford High School.

After learning that her son was the suspected shooter, Jennifer Crumbley texted Smith: “The gun is gone and so are the bullets,” and “Omg Andy he’s going to kill himself he must be the shooter.” She also said, “Ethan did it.” 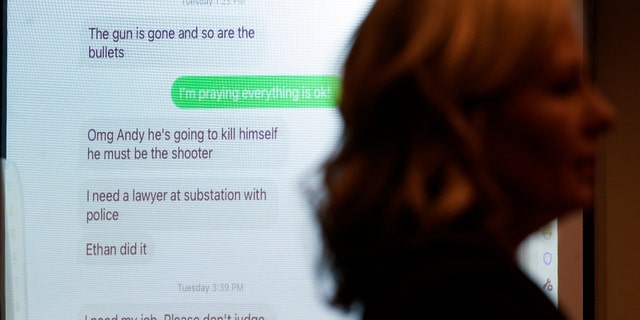 Texts from Jennifer Crumbley, mother of the teenager accused of killing four students in a shooting at Oxford High School, sent to co-worker Andrew Smith are shown. (AP Photo/Paul Sancya)

“I need my job. Please don’t judge me about what my son did,” she texted Smith.

Smith told the court he “was surprised she was worried about her job at the time,” but later stated that she could have been worried about her son, as well, in response to a question from Jennifer Crumbley’s defense attorney.

The National Suicide Prevention Lifeline can be reached by calling 800-273-8255. For those who don’t want to speak to a counselor, there’s also a national Crisis Text Line available 24/7 by texting “home” to 741741.

U.S. Justice Dept scales back use of chokeholds and no-knock warrants