A widower whose wife died from coronavirus days after giving birth to a daughter has called on the prime minister to ensure pregnant women are all permitted to work from home.

Mary Agyeiwaa Agyapong, 28, died on April 12 after being admitted to Luton and Dunstable University Hospital in Bedfordshire with shortness of breath.

She had worked as a nurse at the hospital until she was 32 weeks’ pregnant.

Her partner Ernest Boateng said she was initially discharged on April 5 before being readmitted two days later with symptoms of coronavirus.

Surgeons safely the delivered baby, also named Mary, by caesarean section before Ms Agyapong was transferred to the intensive care unit where she died on Easter Sunday.

Mr Boateng, 30, has now written to Boris Johnson asking for women to be able to work from home once that are 20 weeks’ pregnant, or be suspended with full pay. 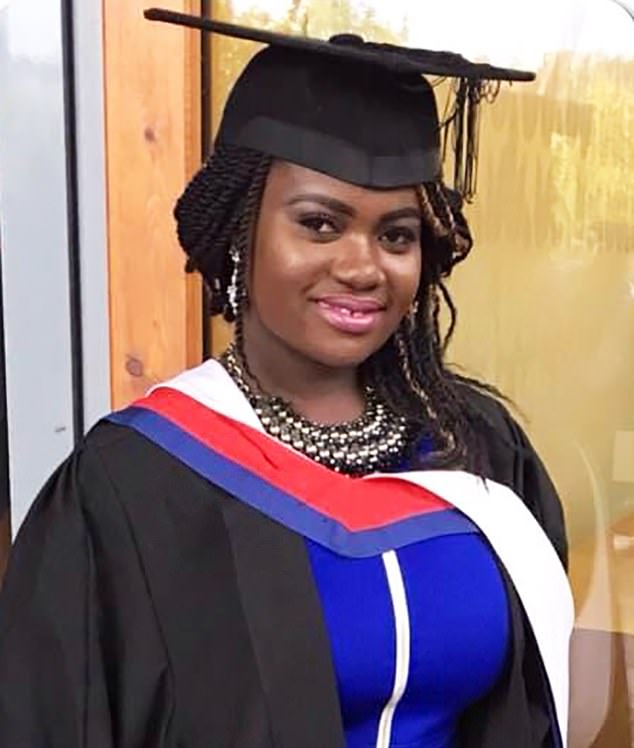 Mary Agyeiwaa Agyapong, 28, died on April 12 after being admitted to Luton and Dunstable University Hospital in Bedfordshire, where she worked as a nurse until she was 32 weeks’ pregnant.

He insisted that ‘pregnant women must be protected during this pandemic,’ the BBC reported.

‘I would be delighted to meet with you to ensure that no other family is forced to endure the suffering that mine has,’ Mr Boateng added.

Pregnant women are currently considered at ‘moderate risk’ of Covid-19, with the NHS advising people in this category ‘can go out to work (if you cannot work from home) and for things like getting food or exercising.’

The guidance adds: ‘But you should try to stay at home as much as possible.’

A Healthcare Safety Investigation Branch (HSIB) report into Ms Agyapong’s death criticised her care, with concerns including insufficient checks on her after she was first admitted into A&E.

Other concerns raised in the HSIB report include there being no reason for her initial discharge and a lack of a ‘proper care plan’ on her readmission.

However, the safety watchdog said it understood that knowledge of the risks for pregnant mothers was ‘limited’ at the time and an increased risk for BAME people ‘had not been identified.’ 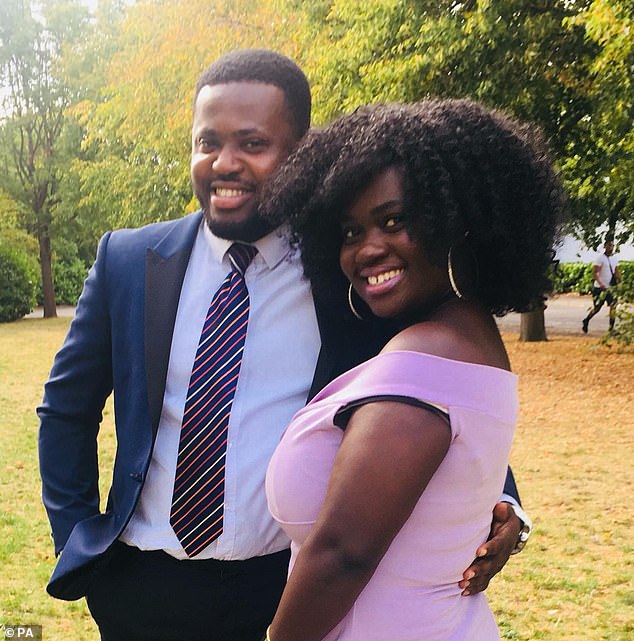 Her partner Ernest Boateng (seen together), 30, has now written to Boris Johnson asking for women to be able to work from home once that are 20 weeks’ pregnant, or be suspended with full pay

Ms Agyapong had been working on a general ward – ward 12 – at the hospital which later became a Covid-19 ward ahead of leaving work at 32 weeks’ pregnant.

The hospital claims it did not have any coronavirus patients before she took maternity leave.

A Department of Health spokesperson said: ‘We are committed to making the NHS the safest place in the world to give birth, and Trusts must take all possible steps to minimise the risk of COVID-19 for women and their babies.

‘If necessary safety measures cannot be put in place, such as adjustments to their job or working from home, pregnant women should be placed on paid leave.’

In September, a pre-inquest review at Bedfordshire and Luton Coroner’s Court briefly outlined concerns Mr Boateng had about the decision to discharge Ms Agyapong from hospital on April 5, and the conditions at her work while she was pregnant. 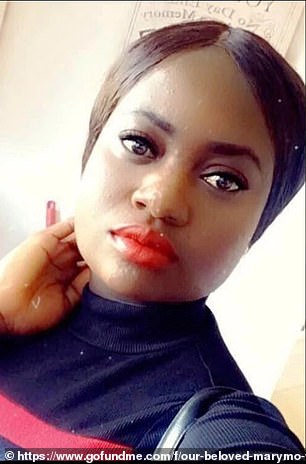 Emma Whitting, senior coroner for Bedfordshire and Luton, told lawyers representing Ms Agyapong’s family, the hospital trust, and the Healthcare Safety Investigation Branch that witnesses including senior members of the discharge team and the mother of two’s line manager or equivalent were likely to be required to give evidence.

The coroner adjourned the hearing until a further pre-inquest review in January, with the inquest continuing over three to four days in March.

Earlier, she told Mr Boateng, who watched on video link: ‘I want to start by expressing my condolences for the loss of Mary.

‘I have seen pictures of her and read a little bit about her in the press, and I can only imagine what a hole she’s left in your life and the lives of your family members and her colleagues.’

Mr Boateng previously said his wife, originally from Ghana, should not have been working at the hospital at the start of the pandemic as she had entered the third trimester.

David Carter, chief executive of Bedfordshire Hospitals NHS Foundation Trust, described Ms Agyapong as ‘a highly valued and loved member of our team, a fantastic nurse and a great example of what we stand for in this trust’.

‘Hopefully any pressures that led to that working situation will be made clear and it will be fully understood if they had any bearing on Mary’s death.’

A crowdfunding campaign for the couple’s two children – including young son AJ – has raised almost £200,000.

Do Meghan Markle and Prince Harry know their baby's gender?

Body of Missing Ala. Woman Is Found at Home of Boyfriend, Who Confessed to Murder Before Suicide