An SNP MP has revealed that she received no support from Nicola Sturgeon or Ian Blackford after a former party member sent her rape threats over her views on trans rights.

Joanna Cherry, 56, was bombarded by Grant Karte, 31, with ‘a number of menacing and obscene private messages, including threats of sexual violence’ after she was fired from the SNP front bench at Westminster on February 1 2021.

The Edinburgh South West MP told the Political Party podcast, released on Tuesday, that she was removed by Mr Blackford as she was ‘wrongly accused’ of transphobia and ‘because I have dared to stick up for women’s rights and lesbian rights’.

She added that lesbians like her are being ‘discriminated against’ because they ‘won’t sleep with people with penises’.

Comedian Matt Forde asked Ms Cherry at the Edinburgh Fringe if either her leader in London or in Scotland had given her support following the ‘very threatening messages’.

She replied: ‘No, never. I’m sorry to have to say that, but I’m going to have to answer your question honestly. No, they haven’t.

And later added: ‘The lack of support from my colleagues was very difficult to deal with.’

Karte was barred last July from contacting Ms Cherry for five years, placed under supervision for 15 months and told to carry out 160 hours of unpaid work in the community.

She also said the SNP is ‘overdue’ a leadership election but said she could not replace Ms Sturgeon as first minister in Scotland now as she is an MP not a MSP. 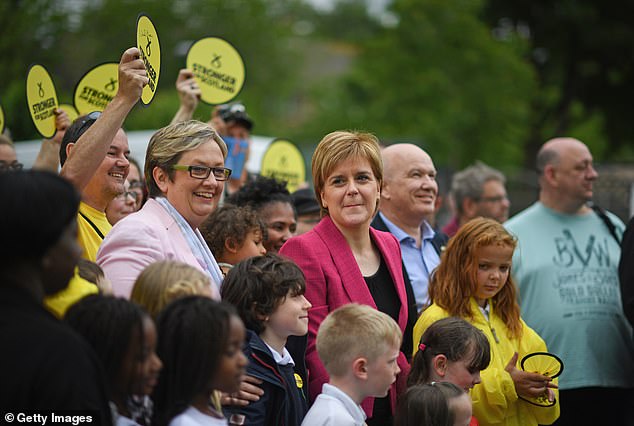 Karte sent her ‘a number of menacing and obscene private messages, including threats of sexual violence’ on evening of Feb 1 2021.

He previously admitted sending Twitter messages that were ‘grossly offensive or of an indecent, obscene or menacing character’ in that he repeatedly threatened Ms Cherry contrary to the Communications Act 2003 and was subsequently sentenced in July 2021.

Ms Cherry, SNP’s former justice and home affairs spokesperson, told Mr Forde, during the live show on Monday that it ‘was upsetting’ to lose her front bench role.

‘I received a series of very threatening messages from someone who turned out to be a party member threatening to rape me and that was really upsetting for me and my then girlfriend, it was very difficult to deal with,’ she said.

‘And also the fact that there was no acknowledgement of any of the work I’d done over the last few years before.

‘It was like I had been, well, I suppose, cancelled, just erased from SNP history.’ 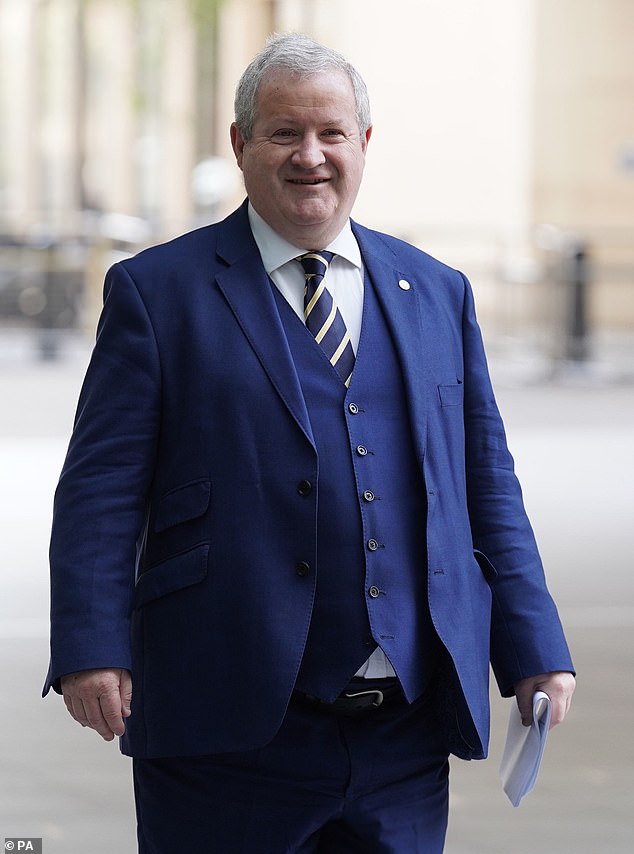 The Edinburgh South West MP told the Political Party podcast, released on Tuesday, that she was removed by Ian Blackford (pictured) as she was ‘wrongly accused’ of transphobia and ‘because I have dared to stick up for women’s rights and lesbian rights’

Though she said she did know why she had not been given support by the leaders, she added: ‘As a result of the no-debate culture, we have created an area in our political discourse, where it’s all right for women to be threatened, have death threats and rape threats, and people won’t defend them.

‘Perhaps because, as I said earlier, people are afraid that if they defended me or supported me, they themselves will be accused of being transphobic. Although I hasten to add, I’m not transphobic and it’d be a bit surprising if I was given my history.

‘There has been support from many members of the party, and many other parliamentarians.

‘But there’s been no support whatsoever from the [SNP] leadership and I don’t understand why. You would have to ask them. As I say, I think maybe they are afraid that if they were seen to be supporting me they would be tarred with the same brush and it’s just a very unfortunate state of affairs that we have gotten ourselves into.’

She added ‘privately some colleagues have given their support but said: ‘I think a minority of people, probably what they most wanted me to do, was to leave the SNP. But I have no intention of leaving the SNP.’ 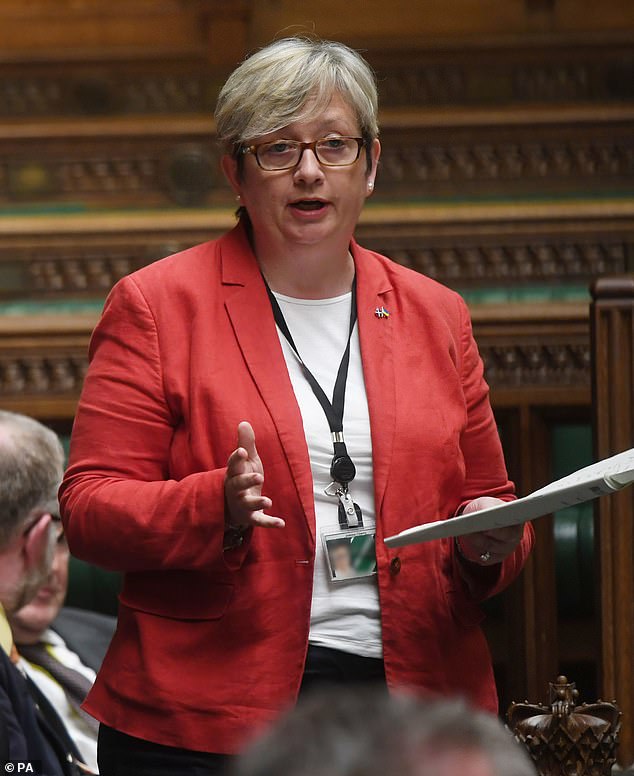 She also spoke about how different Patrick Grady was treated after he was banned from the Commons for two days and the SNP for a week after an independent investigation found he had acted inappropriately towards a member of party staff in 2016.

Mr Grady apologised in the Commons over the incident, which the report said happened while he was under the influence of alcohol.

But a recording that surfaced in June of an SNP group meeting drew criticism for Mr Blackford, who could be heard saying Mr Grady deserved the group’s support upon his return, despite the complainer saying his life had been made a ‘living hell’ and he had not been supported through the process.

The man who complained, who still works for the party, said he was considering legal action against the SNP.

In a response to the leaked recording, Mr Blackford said he ‘deeply regrets that a member of staff was subject to inappropriate behaviour’.

He added that he was initiating an external review of ‘support available to staff, to sit alongside the independent advice service and independent complaints process’. 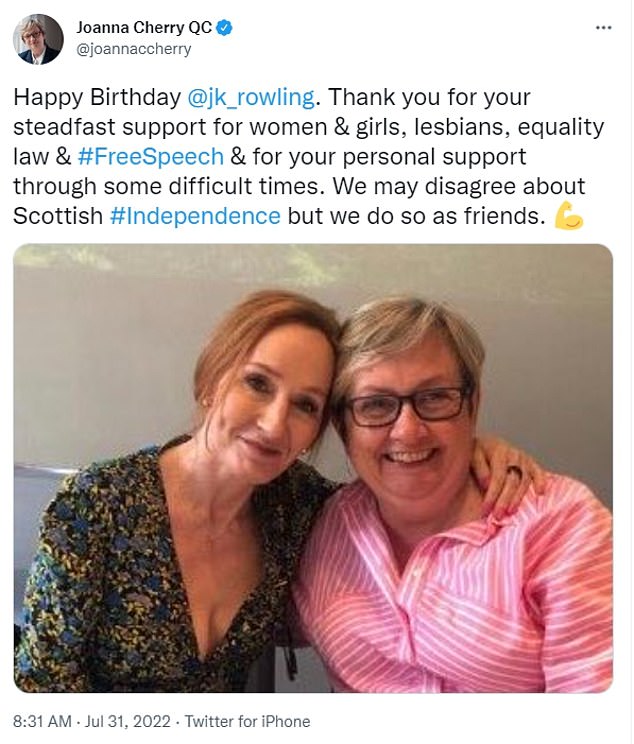 Ms Cherry also said she wouldn’t have got through the ‘last three years’ of ‘death threats’ and ‘attacks on her integrity’ without her sisters in parliament and outside. Pictured: Her birthday wishes to JK Rowling

‘I did take it rather personally. I thought it was most unfortunate.’

Ms Sturgeon has previously said she could not lead the party in 2026 when it has its next election and was asked if she would replace her.

She said: ‘Why would I [say no]? Why would I have left my career and gone into politics unless I was ambitious to achieve change?

‘The way you achieve change is by being in government and possibly leading the government.

‘So I’m not ruling it out. It’s something I would consider in the long term but I don’t think it’s something that I can see as happening in the short term.’

Ms Cherry also spoke about her ‘outrageous’ lunch with JK Rowling and Rosie Duffield and other feminists earlier this year who have been outspoken on the trans issue.

She said she wouldn’t have got through the ‘last three years’ of ‘death threats’ and ‘attacks on her integrity’ without her sisters in parliament and outside.

‘I have made some real fantastic new friendships through this,’ she said. ‘There has been a determined attempt to bully me out of politics and I’ve stayed in and I’m really proud of that.’

Argentina's Peronists sweep back into power as Macri ousted