A MUM whose tot fell into water so hot that almost all his skin fell offhas warned parents to be extra careful when running a bath for their children.

Jessica-Leigh Cox,said it was a miracle that her son, Jenson Smith survived the freak accident which left him with horrific burns from head to toe. 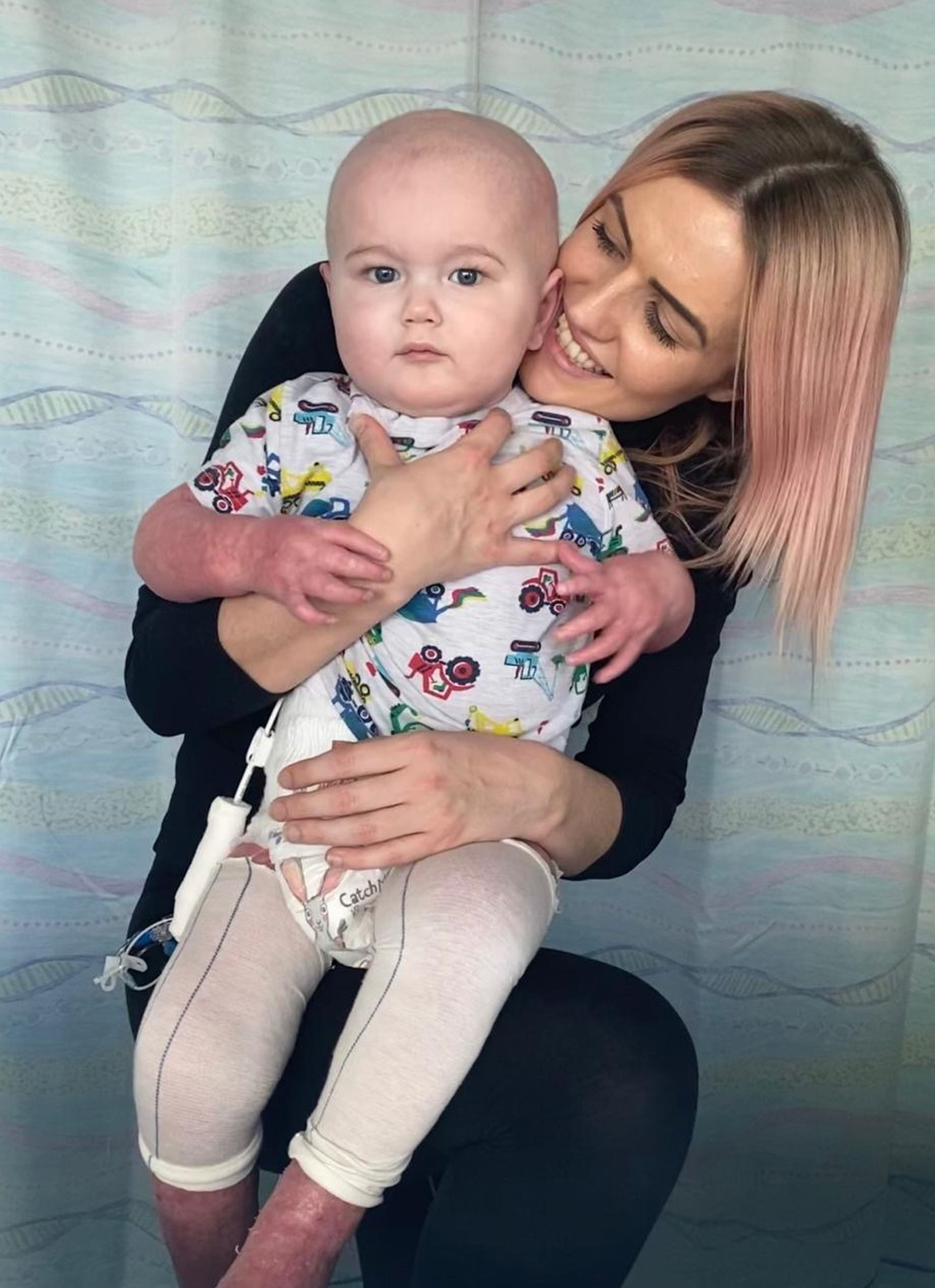 Last week the two-year-old underwent his 50th operation, which have included skin grafts and bowel surgery, and despite this his mum said he is still a cheeky chap.

The 29-year-old mum thought the door was closed while she was running the hot water last February but Jenson, who was 19 months old at the time, managed to climb into it.

Jess and partner Jason Smith, 29, heard a splash as they dashed to the bathroom but despite instantly pulling their son out, most his skin slipped off – a horrifying condition from severe burns known as 'degloving'. 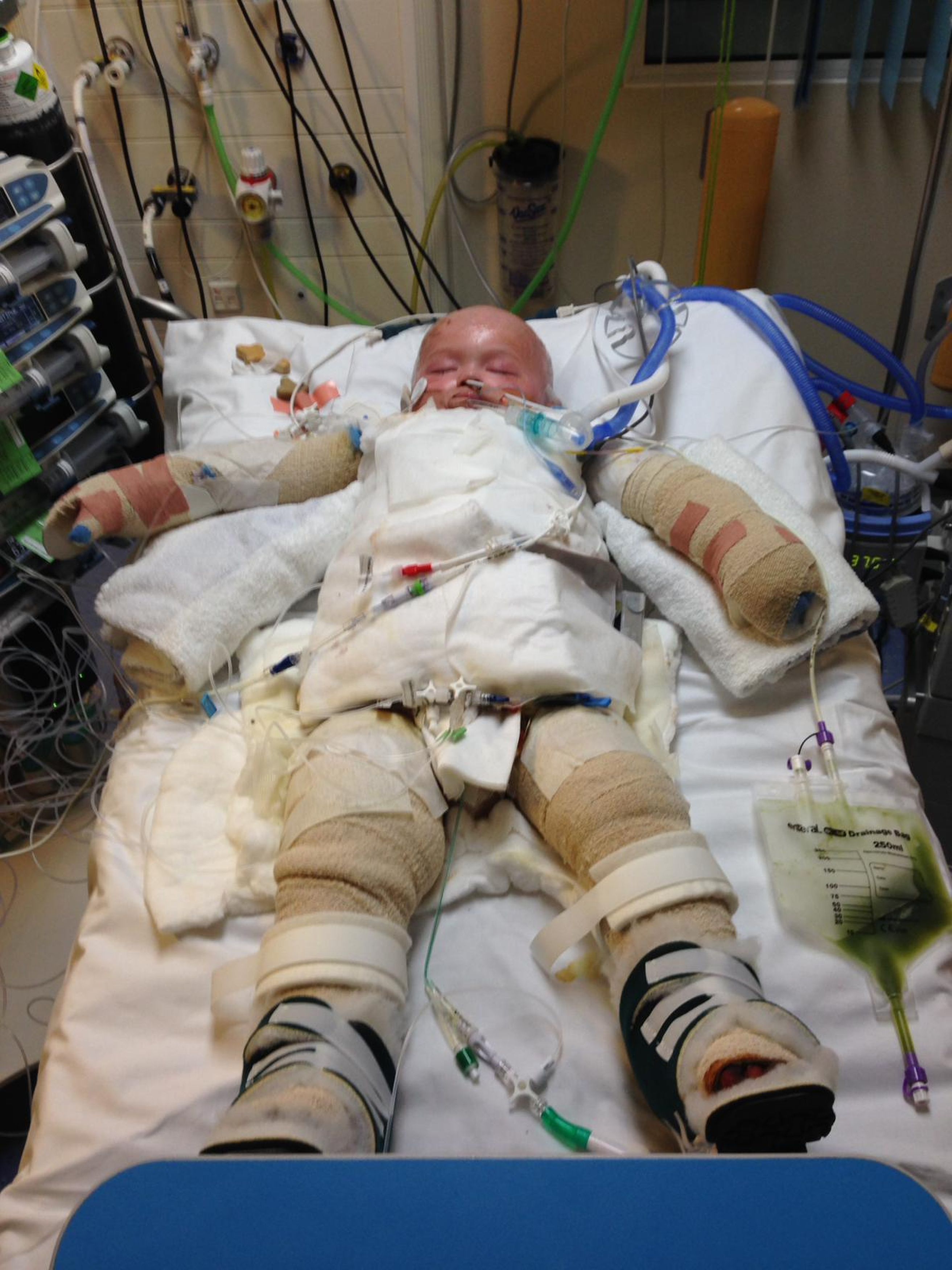 Jenson was airlifted to Birmingham Children's Hospital where surgeons were forced to remove half of his bowel after discovering it had died from 'shock' and was given just a 3% chance of survival.

Jess claims doctors 'didn't think he was going to make it' and horrifying photos show him entirely wrapped in bandages like a mummy as he was covered in third degree, and even some fourth degree, burns. 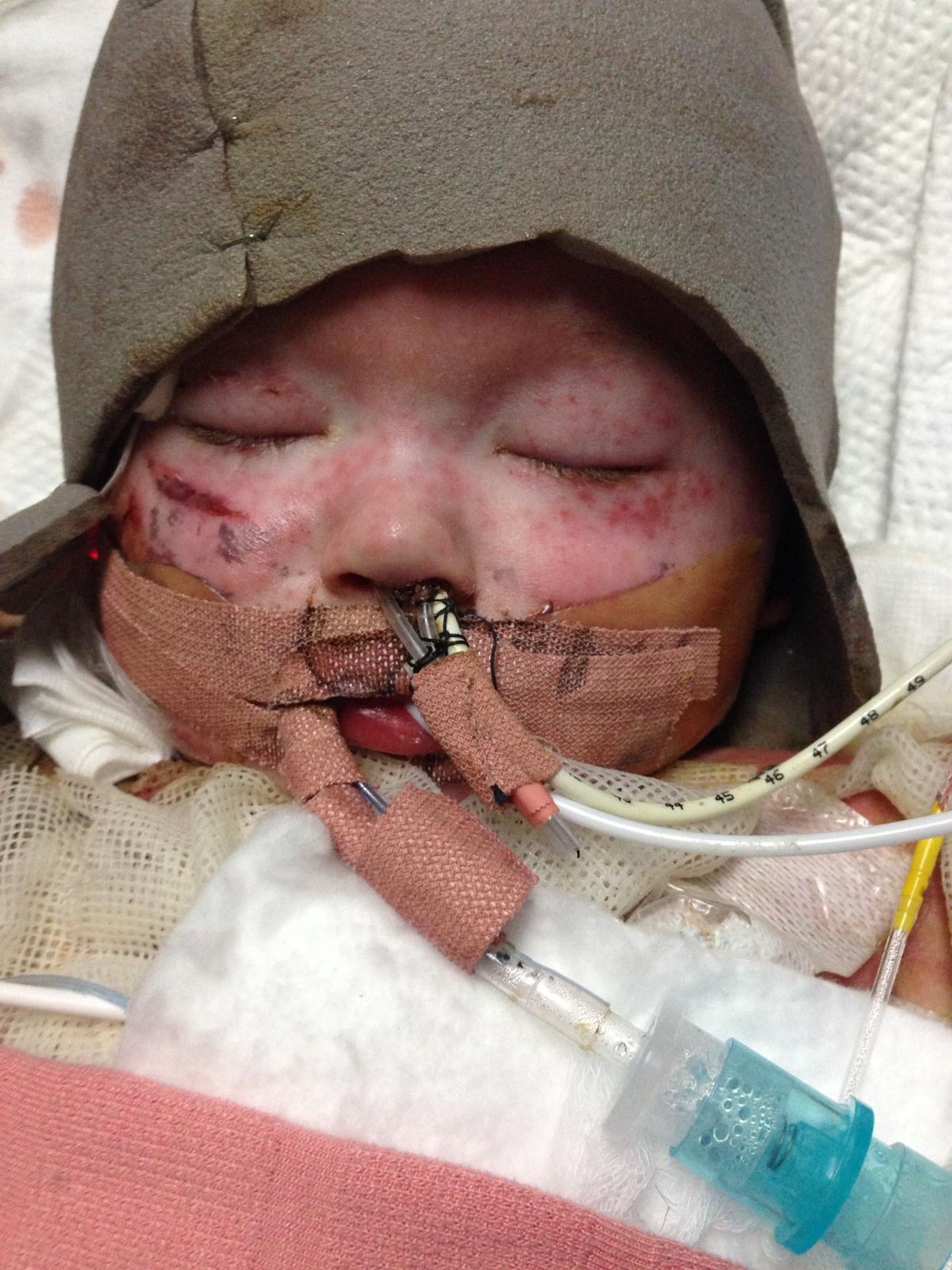 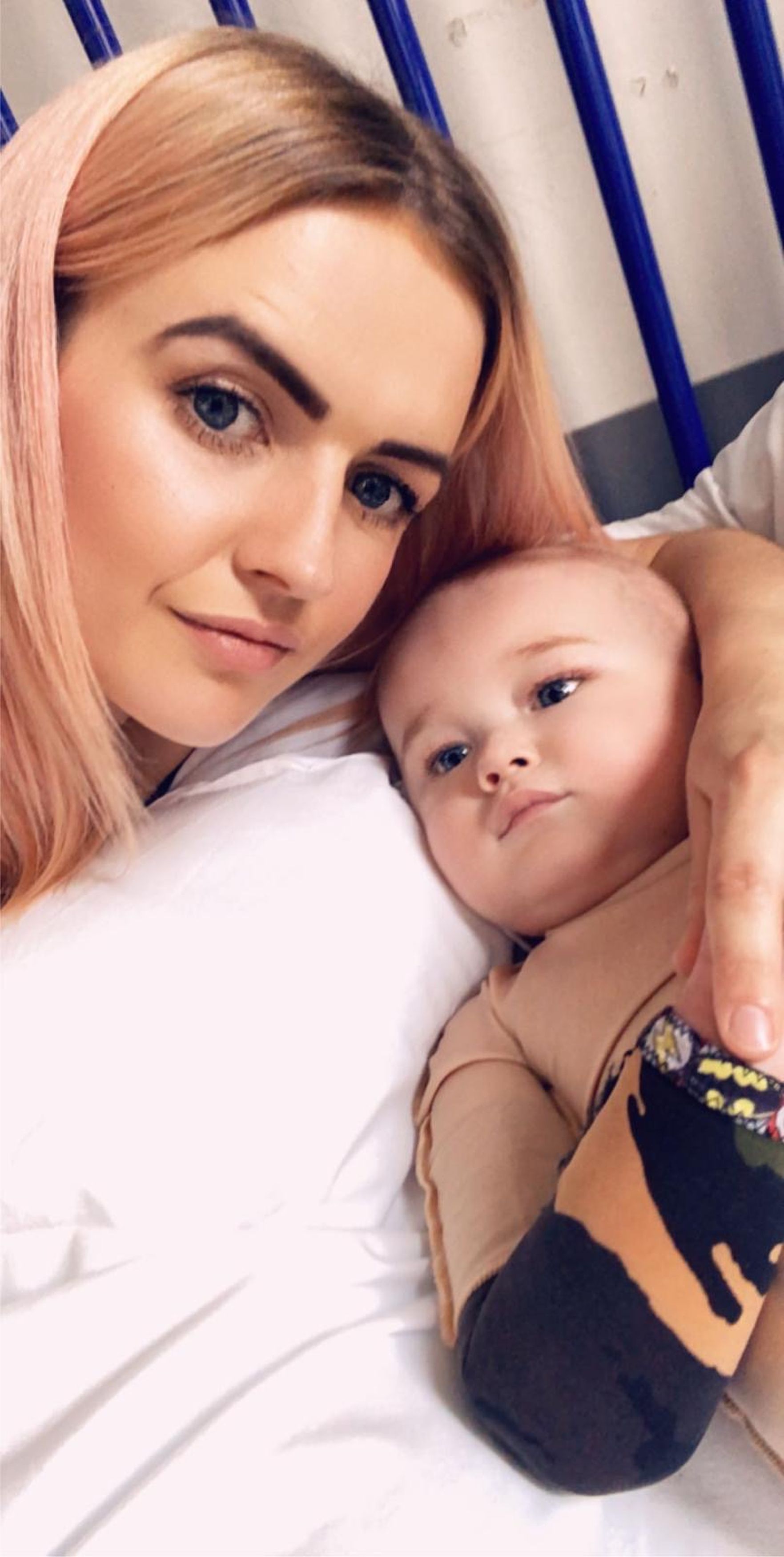 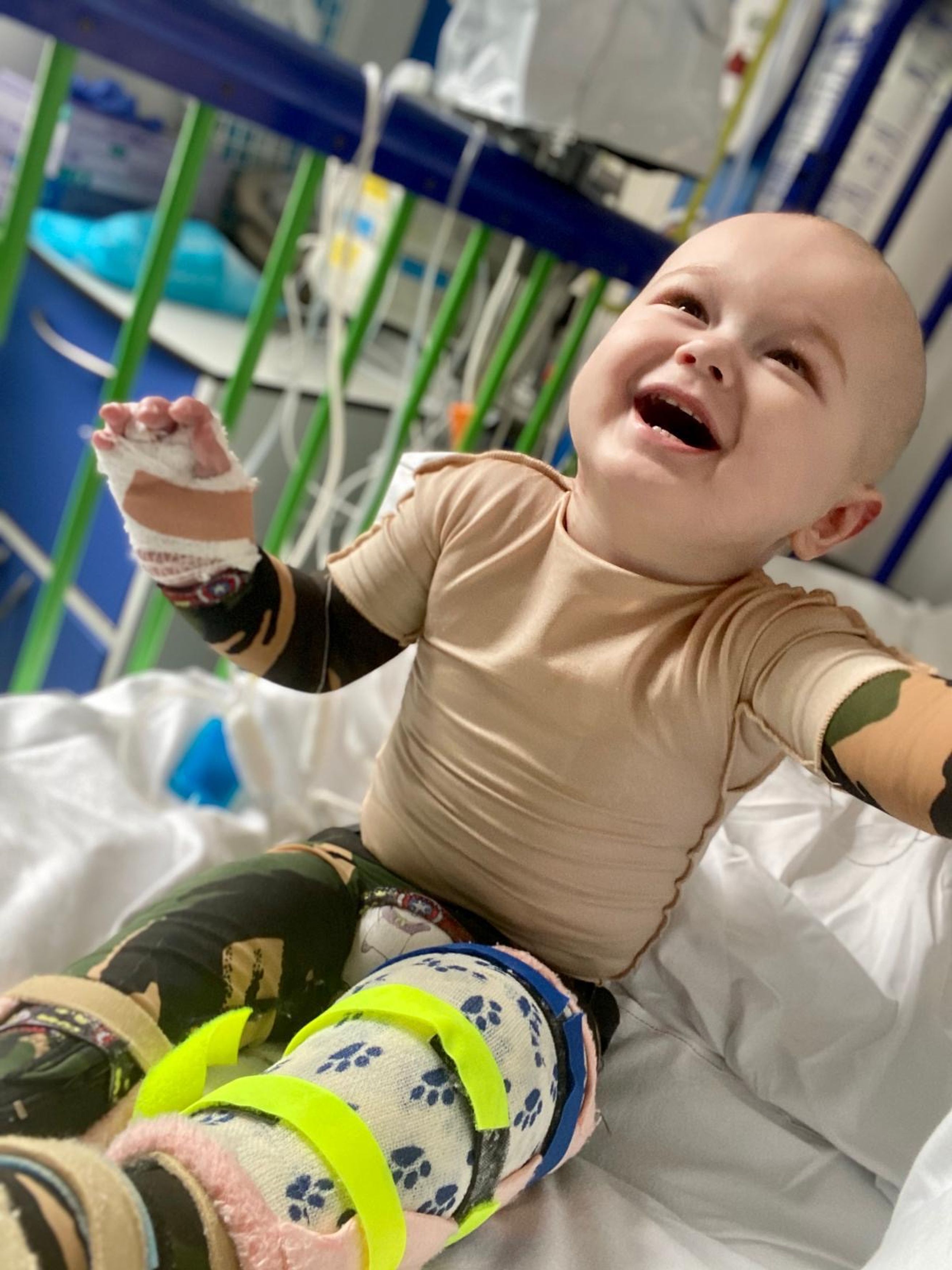 However the 'strong little boy' spent six months in hospital, including five weeks in intensive care, and after undergoing multiple surgeries including skin grafts, was eventually brought home last July.

Despite having just undergone his milestone operation just last week, Jenson's 'always got a smile on his face' and a family friend has now set up a JustGiving page to raise funds for a family trip to Disney World.

Jess, of Warwick, Warwickshire, said: "I know lots of other parents who have their water temperature at home set to 70 degrees, and my main message is, 'can you please go home and turn it right down?'.

"I would rather have a cold shower or a cold bath than ever have to go through anything like this again.

"I didn't know water could do that to a person – when he was in hospital his little toes and the ends of his fingers were black like he'd been burnt in a fire.

"I've still got friends who couldn't believe that it had happened with water.

"We were so focused on the stairs, the fire door, the windows – there were always things that we weren't going to think about – and the bath temperature wasn't one of them, so I assume it's not for a lot of people.

"We were at home, I'd put the boys down on the sofa for an afternoon nap and went to run a bath.

"It must have been three minutes and my little boy Teddy came running in the kitchen saying 'Jenson, climbing hot bath, hot bath'.

"We ran as quickly as we could to the bathroom but as we got to the door we just heard a splash and I instantly pulled Jenson out of the bath – but his skin just dropped to the floor."

They placed Jenson in a sink and instantly called an ambulance.

He was airlifted to Birmingham Children's Hospital, sedated on arrival and rushed straight to resus where she recalls there being 30 people in the room waiting for him.

He was then stabilised and sent to ICU and as he didn't have any skin they created a stoma to prevent infection, but discovered his burns had caused a clot in his intestines that had shut off the blood to his bowels – and half of them had to be removed. 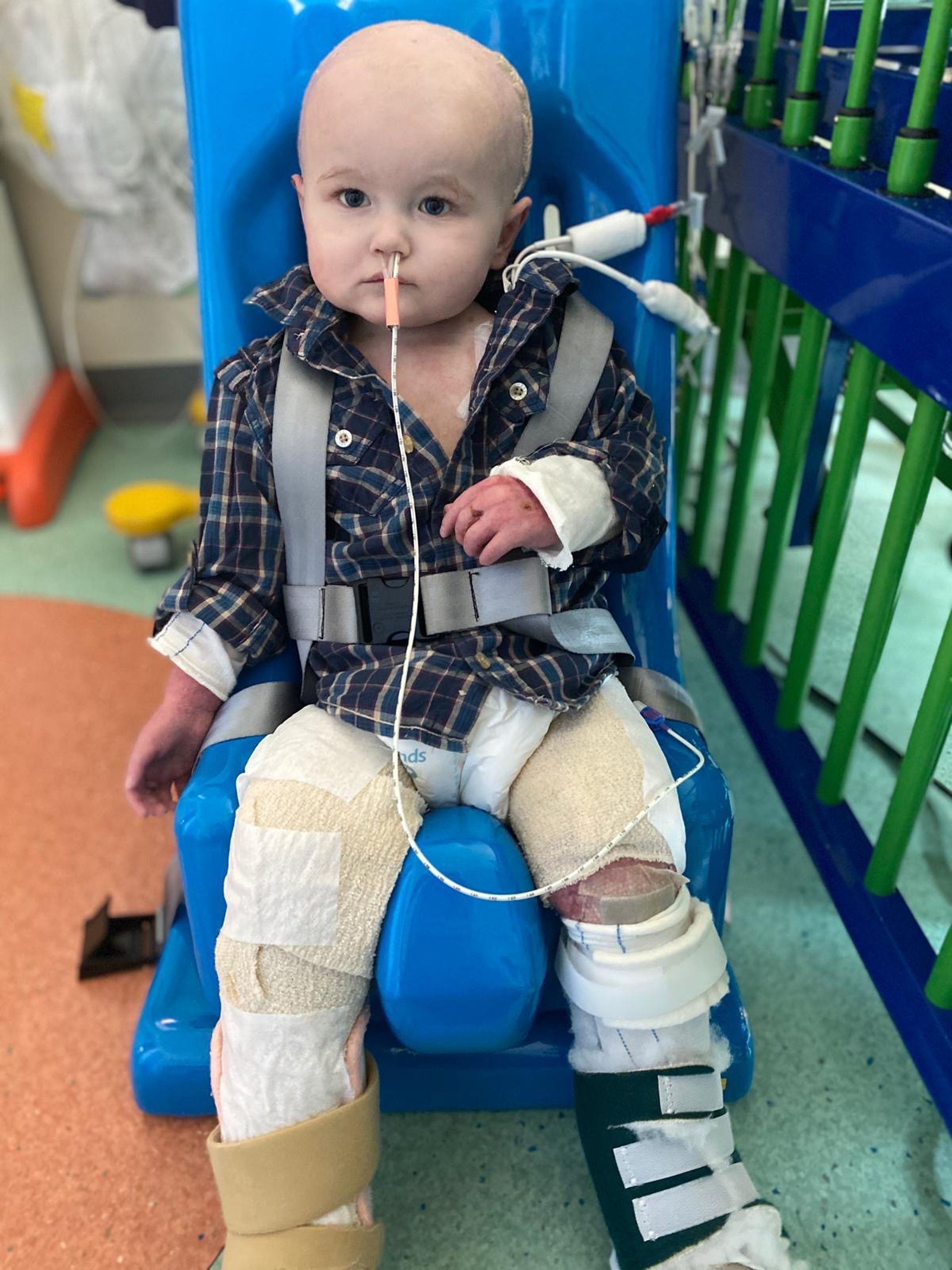 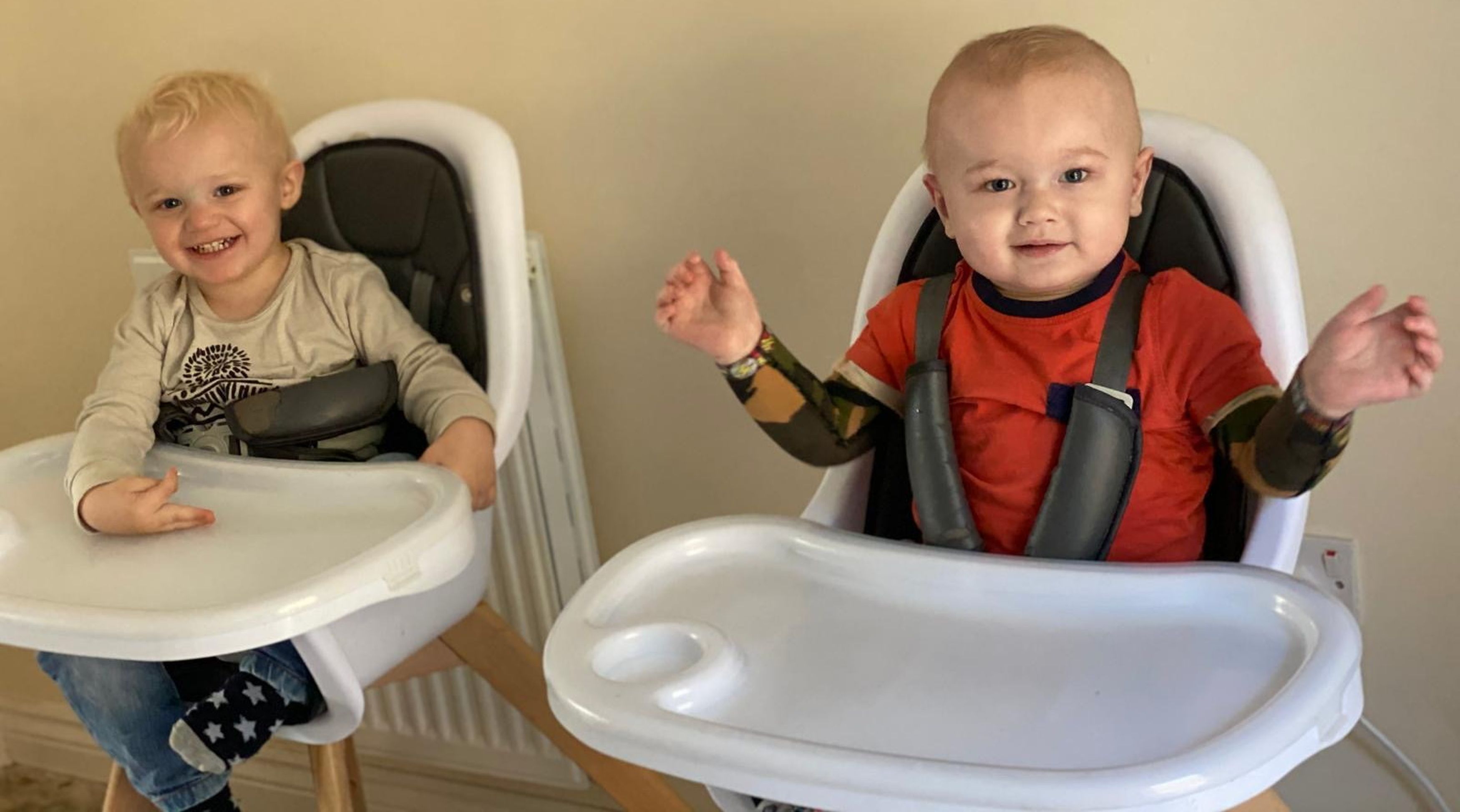 Jess said: "He suffered 94% scalds to his body and it was obviously touch and go – honestly I don't think they thought he was going to make it from the burns themselves.

"At that point they didn't know why or how – but they didn't think he was going to make it – he was given a 3% chance of survival.

"They went ahead with the stoma and kind of said 'he's got 48 hours, if his bowel turns pink and comes back to life, he's not out of the woods he's still critical, but it's a good sign and we've got something to work with'.

"But they said if it stays black 'that's it' and they were literally the words that we were given – 'that's it'."

Jenson underwent another operation in which a further 3cm of his bowel was removed and he's since been diagnosed with Small Bowel Syndrome.

The mother-of-three said they're hoping 'for a miracle' and that his bowel will rectify itself within a couple of years.

His skin has slowly healed after grafts to his leg, bottom and stomach and he still has to be washed three times a day and creamed 'from head to toe'.

As the grafting and scarring causes stiffness, he also has stretches to ensure he keeps his range of movement.

Jess said: "He's such a strong little boy – nothing seems to faze him at all.

"Even the little things like having his medicine every four hours as soon as he sees me he'll just run straight up to me and take his medicine, and then carry on with his day.

"I think everybody when they hear about Jenson, they expect to see a poorly little boy – but he's always got a smile on his face and is so happy.

"Whilst he was in hospital he was on steroids and wasn't moving around – he looked poorly, but when I look at pictures of him before the accident, he's just an older version – it's lovely, it feels like we've finally got our old Jenson back." 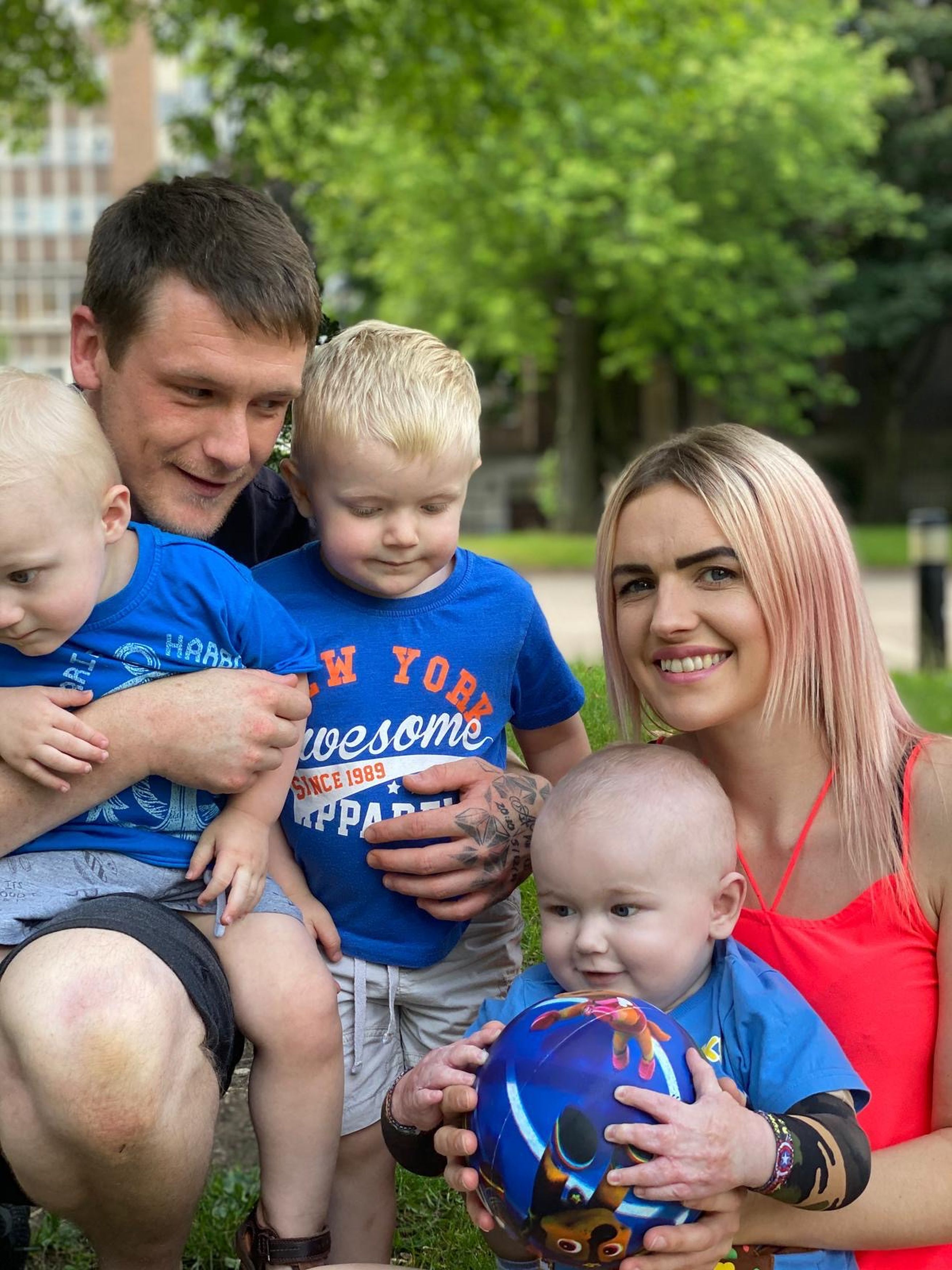 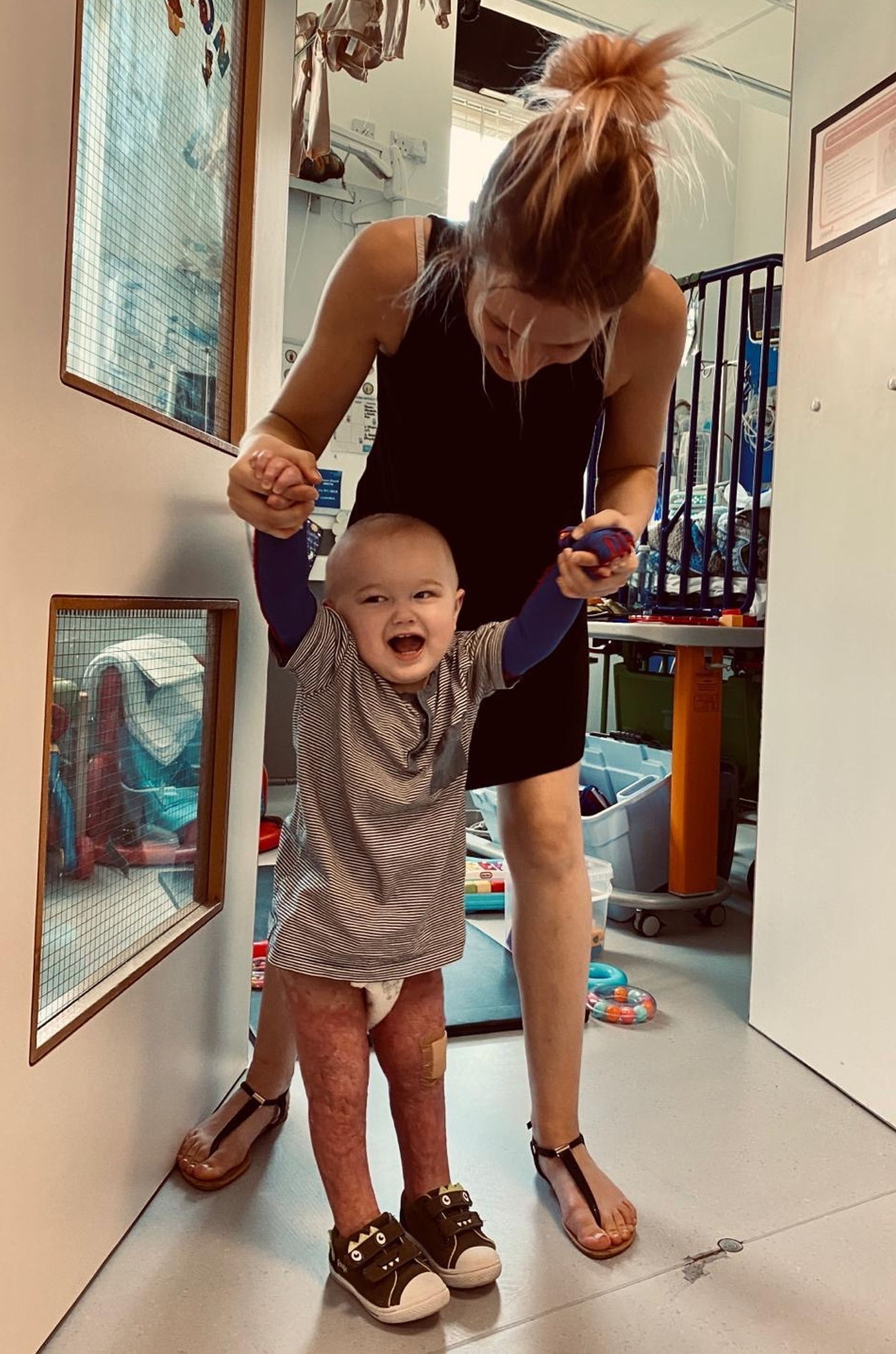 Jess shared Jenson's story on Facebook in a bid to raise awareness and reach out to parents who'd experienced similar ordeals and said she was 'overwhelmed' with helpful advice.

As the family have 'been through hell' in the past year a friend has recently organised a fundraiser for a trip for Jess and family to Disney World.

Jess said: "I'm now in touch with parents that have had accidents and actually had the same trauma to the bowel, which I didn't really expect.

"To speak to other parents that have children that have been through the same thing and I'm able to advise on the vest [which keeps a central line safe] and little things that I've been through – it's kind of nice.

"Even if in a few years time Jenson's bowel is absolutely fine and his skin was all healed – touch wood, I'd absolutely love it – I'd still want to help other people, because I know what this experience has done to us as a family, and to Jenson.

"The Disney trip would mean the world and more. I couldn’t think of anything special enough to do for Teddy for saving Jenson’s life but he has his heart set on it. All three of them have been through so much over this past year."

You can donate to their JustGiving page here.

'Our airplanes are safe,' Boeing says as officials push training