Murderess is jailed for life for getting her friends to kill vulnerable autistic man, 22, who she ‘ghosted’ after they had sex

A woman who had sex with a vulnerable man and encouraged two of her friends to murder him after she tried to ‘ghost’ him has been jailed for life.

Becki West Davidson, 30, ignored messages and protestations of love from autistic Joe Pooley, 22, after they slept together, Ipswich Crown Court was told.

She became enraged and arranged a revenge attack on him after he reacted to her lack of replies by saying that he was surprised she did not live with her children.

Her friends Sean Palmer, 31, and Sebastian Smith, 35, attacked Mr Pooley before throwing him into the River Gipping in Ipswich, Suffolk where he drowned.

Palmer was later said to have confessed to his mother that he held Mr Pooley under the water. 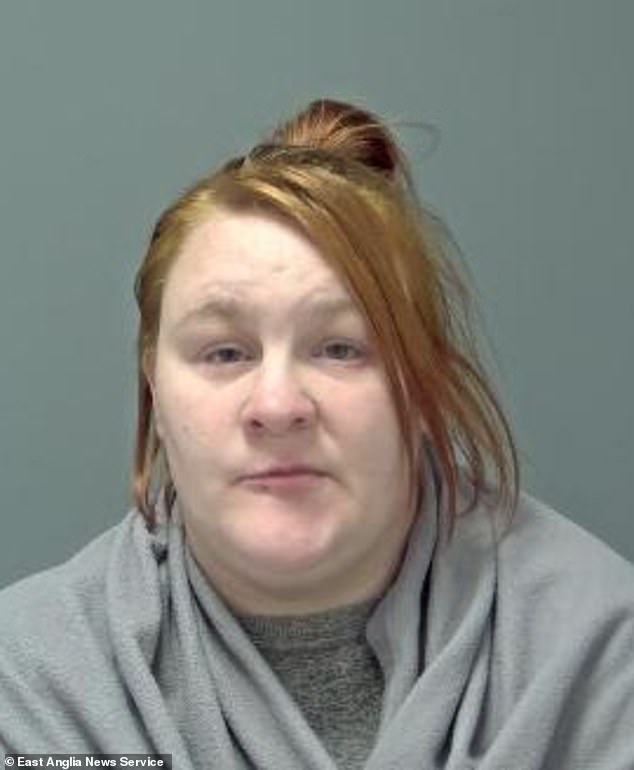 Becki West Davidson (pictured), 30, ignored messages and protestations of love from autistic Joe Pooley, 22, after they slept together, Ipswich Crown Court was told

Mr Pooley was found dead in the river by a dog walker nearly a week after being attacked in the early hours of August 7, 2018.

Smith who was known at the time as Luke Greenland joined Mr Pooley’s family in their search for him before his body was found.

The court heard that Smith had allegedly confessed to a friend that he had taken Mr Pooley to a wood a week before his death and told him to ‘dig his own grave’.

West-Davidson of Ipswich pretended to be grief stricken after Mr Pooley died and was even hugged by his mother who regarded her as one of his friends at a memorial event.

She was ordered to serve 17 years behind bars by Judge Martyn Levett after he said he was satisfied that he she had encouraged the attack.

Smith of Hawick, Roxburghshire, and Palmer of Great Yarmouth, Norfolk, were also jailed for life for murder. Smith was ordered to serve a minimum of 21 years and Palmer was told he must serve 18 years. 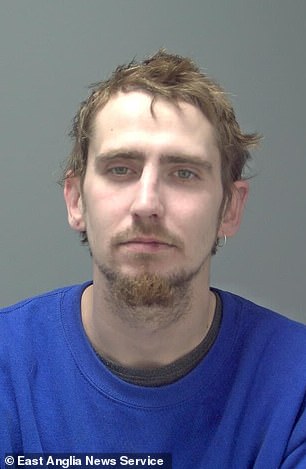 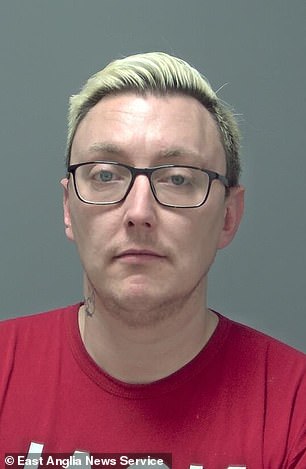 Her friends Sean Palmer (left), 31, and Sebastian Smith (right), 35, attacked Mr Pooley before throwing him into the River Gipping in Ipswich, Suffolk where he drowned

All three had denied murder, but were found guilty after an earlier four-month trial.

But his loving and affectionate messages showed an intensity of feeling that ‘stoked her anger and hostility’.

Judge Levett said he believed that Mr Pooley had ‘fallen madly in love’ with West-Davidson after the sexual encounter.

The judge told her: ‘Rather cruelly you blanked him and ghosted him and alienated him, leaving him bereft of any comfort.

‘There is no doubt in my mind that you encouraged the attack on Joe Pooley. The sad thing is that he was only after a loving heart, but you betrayed his heart.

‘You were part of a group of people who accepted Joe when it suited you, but no sooner had that been done, you rejected him.’ 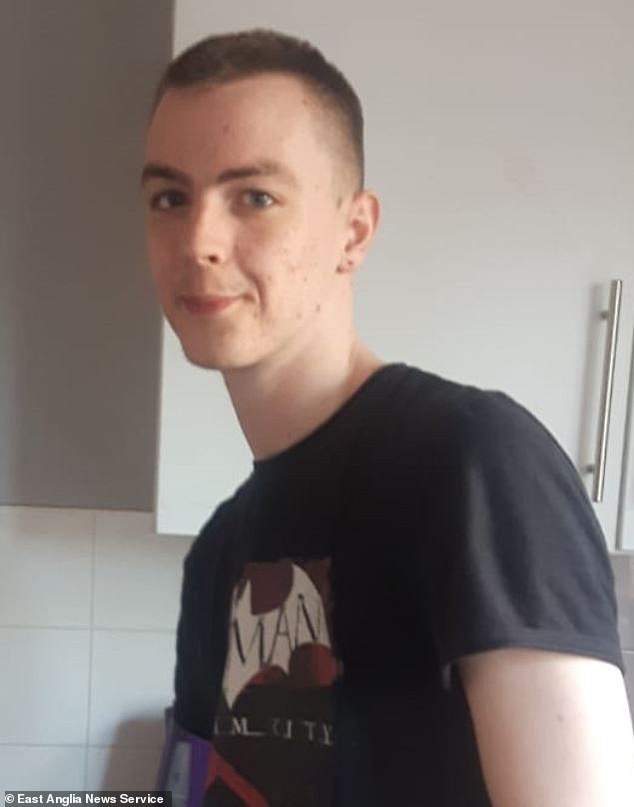 West-Davidson was said to have become enraged after Mr Pooley sent her one message which said: ‘No wonder you ain’t with your kids’.

The jury heard it was a ‘clear reference’ to her children not living with her and it had made her ‘so angry’ that she ‘smashed up her room’.

Mr Pooley was then lured to a meeting, before being walked home by Smith and Palmer who attacked him beside the river.

Mr Pooley’s mother Sam Nicholls read out her victim impact statement, saying he had learning disabilities which became more challenging as he got older.

She told the court he had been placed in unsuitable accommodation without proper support which led to him being bullied and targeted by ‘unsavoury characters’.

Ms Nicholls added: ‘He was desperate for friends but was sadly unable to tell that people around him were not friends.’ 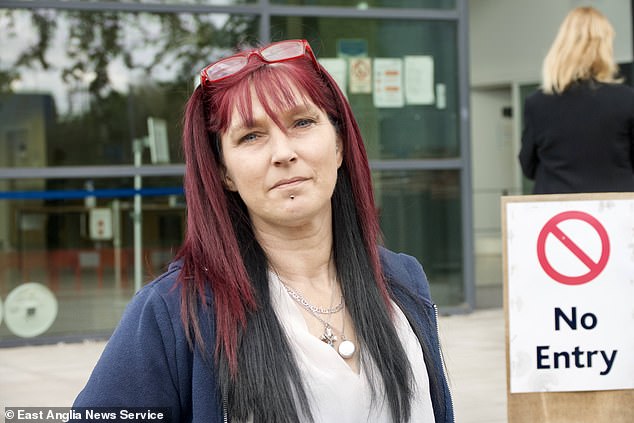 Mr Pooley’s mother Sam Nicholls (pictured) read out her victim impact statement, saying he had learning disabilities which became more challenging as he got older

She described his killers as selfish bullies who picked on him because of his vulnerabilities and were only interested in what they could get out of him.

Speaking of West-Davidson, she said: ‘I will never forgive you for coming to Joe’s memorial and conning me into thinking you cared for Joe. I put my arms around you and comforted you.’

Ms Nicholls told of the ‘horrendous’ impact of her son’s murder on her life, saying she had suffered nightmares and was haunted by images of him lying in the water.

She condemned his killers for failing to show remorse and not coming forward to say anything while the hunt for her son was going on in order to ‘save their own skins’.

As a result she said, she was ‘robbed of the chance to kiss Joe goodbye because of his decomposition of his body’.

Smith failed to attend the court for his sentencing, sending a message which was read out by the judge. 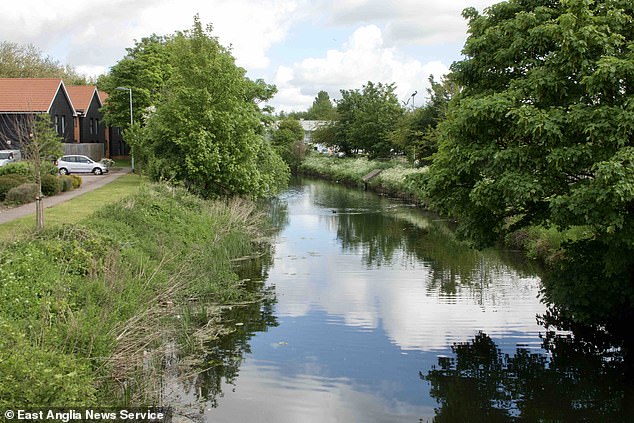 Mr Pooley was found dead in the river (pictured) by a dog walker nearly a week after being attacked in the early hours of August 7, 2018

It said: ‘After a long case where I constantly felt rail roaded, I don’t feel the point. It’s been biased the whole way through. I don’t accept what will be an equally biased sentencing.’

Prosecutor Christopher Paxton QC said West-Davidson had ‘encouraged others’ to attack Mr Pooley, who was ‘vulnerable, trusting of others and easily taken advantage of’.

Smith had denied telling a friend that he and Palmer had ‘put Joe in the river’.

He claiming instead that he punched Mr Pooley twice before he and Palmer ran off and left him on the ground.

Asked why he left Ipswich for Scotland shortly after the alleged murder, Smith said he ‘needed to get away for a while’.

Mr Paxton claimed West-Davidson ‘tried to cover up’ the alleged murder by deleting a number of Facebook messages.

They included one in which Mr Pooley asked her to ‘call off the hit’ and another telling him: ‘You’re f****d, mate’.

Smith was also said to be angry about things that Mr Pooley allegedly said about him and his former girlfriend Lisa-Marie Smith.

The court heard that he sent him a message, saying: ‘I’m going everywhere until I find you’.

Lisa-Marie Smith, 26, was cleared of murder and manslaughter at the trial.

Mr Pooley’s mother Sam said after the hearing: ‘I am very happy with the sentences. It is not going to bring Joe back, but it helps that he has some justice.’

What happens next as Spain's Socialists try to form government