They’re not just pieces of cloth — many items, big or small, in Museums Victoria’s clothing and textile collection have a story to them, even performer Bernice Kopple’s little red feather and lurex bra.

Ms Kopple was a showgirl, snake dancer and zookeeper. After she died in 2011, her friends donated to the museum photos, theatre programs and newspaper clippings from her full, creative life. 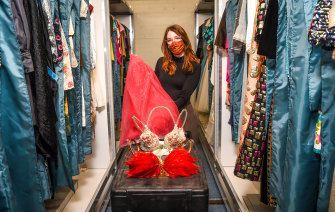 The friends mentioned that they’d just dropped her costumes at an op shop. “They didn’t think we’d be interested,” said the museum’s clothing and textiles collection manager, Hannah Perkins.

A quick-thinking museum curator asked the friends to retrieve the costumes, including the feather bra, which are now in the museum’s permanent collection. 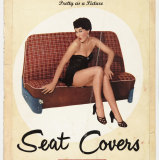 Ms Kopple migrated to Australia from Scotland in 1950, aged 19, and became a model, Tivoli showgirl, a dancer with live snakes and a zookeeper. 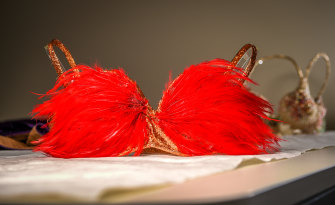 In later years, she travelled with her dog and caravan, performing and working as a cook and jillaroo in the outback.

Ms Kopple’s costumes are among about 10,000 clothing items the museum has amassed in more than 100 years.

On Wednesday, as part of Melbourne Fashion Week, there will be a rare, virtual tour of selected items in Museums Victoria’s clothing and textile collection, which is kept in a suburban storage facility.

Ms Perkins said most items come from public donations. Those accepted tend to tell a story about a person or an era — a tale of who wore them and when. 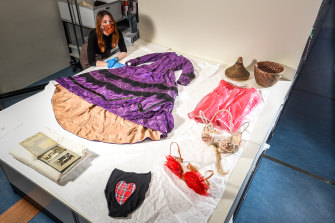 Museums Victoria clothing and textiles collection manager Hannah Perkins with a 19th century purple wedding dress and other items from the collection.Credit:Justin McManus

Ms Perkins said Ms Kopple’s career was atypical for a woman in the 1950s in Australia.

“Women were expected to marry, have kids and lead domestic lives but she was still performing, modelling, travelling and working independently until her old age,” she said.

“Bernice made all her own costumes so they bring her story to life, into three dimensions.”

Among other items in the collection is a purple silk dress worn by South Australian bride Amelia Simon when she married Charles Klopper in 1878. 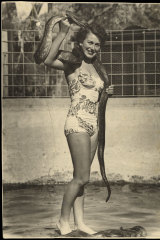 Ms Perkins said it reflected a trend for newly affordable synthetic purple dye. Earlier in the 19th century, purple dye had been derived from snail shells and was expensive.

It’s not well known that the museum has an underwear collection comprising hundreds of items.

Some of them are from manufacturers and retailers, such as the girdles, stockings and brassieres acquired from the Steinberg Drapery, operated by a Jewish immigrant family in Carlton from the 1930s to 1980s. 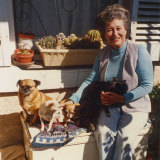 Bernice Kopple with her pet pooches in the 1970sCredit:Musuems Victoria

Clothes in the collection are not necessarily in original condition. One 1960s Prue Acton-designed mini-dress had its collar raised and hem lowered by the wearer’s mother to make it more modest.

The virtual tour of the Clothing and Textiles Collection at Museums Victoria will take place via Zoom on Wednesday, November 17, from 6pm to 7.15pm. The virtual tour is pre-recorded and there will also be a live Q&A with museum experts.

Fascinating answers to perplexing questions delivered to your inbox every week. Sign up to get our new Explainer newsletter here.