This neon light show in the Californian surf can be seen along the wide strands of the Sunny State. The bioluminescence phenomenon has been happening since late April, from the San Diego area to the north of Los Angeles. According to The National Oceanic and Atmospheric Administration, NOAA, the bioluminescence effect is very common in the ocean.

It is created by luminescence within gelatinous zooplankton.

The NOAA stated: “While usually blue in colour, because this is the light that travels best through the water, bioluminescence can range from nearly violet to green-yellow, and very occasionally red.”

The institute said: “Red tides are due to aggregations of dinoflagellates including Ceratium falciform and Lingulodinium polyhedra, the latter of which is well known for its bioluminescent displays, with waves or movement in the water causing the phytoplankton to glow neon blue at night.”

Michael Latz, a bioluminescence expert, and scientist at the Scripps Institution of Oceanography explained the blooms in California are caused by a particular species of phytoplankton called Lingulodinium polyhedra. 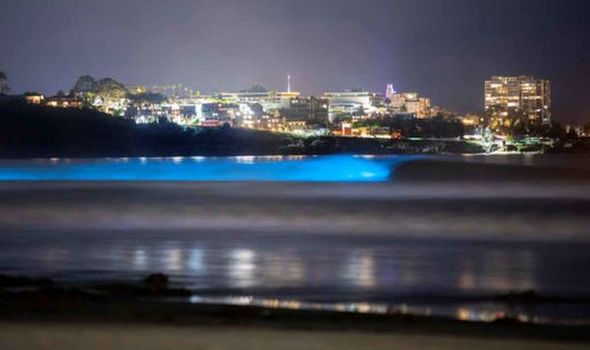 According to Latz, red tides of polyhedra have been known to occur in California since the early 1900s.

However, this year’s red tide appears to be particularly spectacular.

Mr Latz told Newsweek: “The red tide is very large, reaching from Acapulco to the south to Los Angeles to the north.

“It is also the strongest in recent history, most likely in the last 50 years.”

Red tides are unpredictable and there is no way of knowing how long they will last, but Mr Latz says previous examples have lasted anywhere between a few days to one or more months. 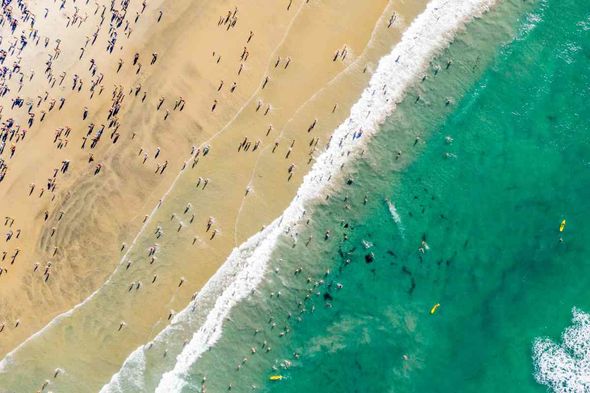 Mr Latz added: “We believe it is starting to degrade but we are unable to predict exactly when it will be over”.

Many passersby stopped to view the stunning scenes.

However police in Malibu and other coastal locations dispersed the crowds.