Cape Canaveral, Florida: NASA’s new moon rocket sprang another dangerous fuel leak, forcing launch controllers to call off their second attempt this week to send a crew capsule into lunar orbit with test dummies. The inaugural flight is now off for weeks, if not months.

The previous try at launching the 98-metre Space Launch System rocket, the most powerful ever built by NASA, was also troubled by hydrogen leaks, though they were smaller. That was on top of leaks detected during countdown drills earlier in the year. 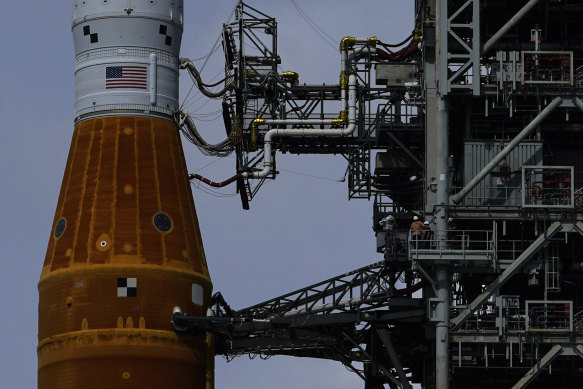 The NASA moon rocket stands on Pad 39B before the Artemis 1 mission to orbit the moon at the Kennedy Space Centre, in Cape Canaveral, Florida. Credit:AP

After the latest setback, mission managers decided to haul the rocket off the pad and into the hangar for further repairs and system updates. Some of the work and testing may be performed at the pad before the rocket is moved. Either way, several weeks of work will be needed, according to officials.

With a two-week launch blackout period looming in just a few days, the rocket is now grounded until late September or October. NASA will work around a high-priority SpaceX astronaut flight to the International Space Station scheduled for early October.

NASA Administrator Bill Nelson stressed that safety is the top priority, especially on a test flight like this where everyone wants to verify the rocket’s systems “before we put four humans up on the top of it”.

“Just remember: We’re not going to launch until it’s right,” he said.

NASA already has been waiting years to send the crew capsule atop the rocket around the moon. If the six-week demo succeeds, astronauts could fly around the moon in 2024 and land on it in 2025. People last walked on the moon 50 years ago.

Launch director Charlie Blackwell-Thompson and her team had barely started loading nearly 4.5 million litres of fuel into the Space Launch System rocket at daybreak when the large leak cropped up in the engine section at the bottom.

Ground controllers tried to plug it the way they handled previous, smaller leaks: stopping and restarting the flow of super-cold liquid hydrogen in hopes of closing the gap around a seal in the supply line. They tried that twice, in fact, and also flushed helium through the line. But the leak persisted.

Blackwell-Thompson finally halted the countdown after three to four hours of futile efforts. 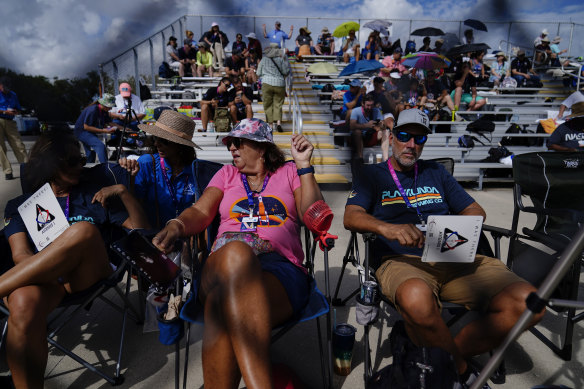 Mission manager Mike Sarafin told journalists it was too early to tell what caused the leak, but it may have been due to inadvertent over-pressurisation of the hydrogen line earlier in the morning when someone sent commands to the wrong valve.

“This was not a manageable leak,” Sarafin said, adding that the escaping hydrogen exceeded flammability limits by two or three times.

During Monday’s attempt, a series of small hydrogen leaks popped up there and elsewhere on the rocket. Technicians tightened up the fittings over the following days, but Blackwell-Thompson had cautioned that she wouldn’t know whether everything was tight until Saturday’s fuelling.

Hydrogen molecules are exceedingly small — the smallest in existence — and even the tiniest gap or crevice can provide a way out. NASA’s space shuttles, now retired, were plagued by hydrogen leaks. The new moon rocket uses the same type of main engines.

Even more of a problem on Monday was that a sensor indicated one of the rocket’s four engines was too warm, though engineers later verified it actually was cool enough. The launch team planned to ignore the faulty sensor this time around and rely on other instruments to ensure each main engine was properly chilled. But the countdown never got that far.

The $US4.1 billion test flight is the first step in NASA’s Artemis program of renewed lunar exploration, named after the twin sister of Apollo in Greek mythology.

Years behind schedule and billions over budget, Artemis aims to establish a sustained human presence on the moon, with crews eventually spending weeks at a time there. It’s considered a training ground for Mars.

Twelve astronauts walked on the moon during the Apollo program, the last time in 1972.

Coronavirus: B.C. liquor stores reduce hours and could limit number of people in the store in wake of pandemic