Rep. Waltz explains why it’s in America’s best interest to stand with Ukraine

Rep. Michael Waltz, R-Fla., explains on ‘Faulkner Focus’ why it is important to be tough on Russia and stand with Ukraine.

Germany has provided a meager donation of only 5,000 helmets and a field hospital to bolster Ukraine ahead of a possible Russian invasion while other NATO allies deploy forces to neighboring countries and supply weapons and munitions to Ukraine itself.

NATO has therefore continued to deploy troops to the region – but not to Ukraine itself – in an attempt to deter invasion by Russia.

Ukraine asked Germany, which maintains military forces of some 261,700 personnel, to provide at least 100,000 helmets and protective gear to the vulnerable nation. Germany responded with an offer of 5,000 helmets for troops to use – an offer that Kyiv Mayor Vitali Klitschko decried as a “joke.”

“The behaviour of the German government leaves me speechless,” Klistschko said in an interview. “The defense ministry apparently hasn’t realized that we are confronted with perfectly equipped Russian forces that can start another invasion of Ukraine at any time. What kind of support will Germany send next, pillows?”

German Chancellor Olaf Scholz insisted his country will not supply Ukraine with “lethal” aid as officials do not wish to “fuel the situation” and would rather find a diplomatic solution. Germany will provide a complete field hospital and necessary training, but NATO’s most critical European member has otherwise fallen short in comparison to other NATO allies, who appear to fully recognize the imminent danger Russia poses to Ukraine’s stability and independence.

The U.S. last week delivered 200,000 pounds of ammunition and weapons for frontline Ukrainian defenders as part of a planned total investment of $2.7 billion to improve the country’s security.

And some NATO countries have deployed various military forces to member nations that border Ukraine and Russia, including Romania, Estonia, Poland and Lithuania.

The U.S. deployed six jet fighters to Estonia on Wednesday as part of the Baltic Air Policing Mission. European Command claimed the jets would remain in the country until the end of next week, but Major General Jöerg Lebert, Chief of Staff, noted the jets would “contribute to the Alliance’s collective defense posture.”

The arrival of jets comes as President Biden put thousands of troops on high alert as he considers whether to deploy them and bolster a broader NATO effort to protect allied countries bordering Russia and Ukraine. 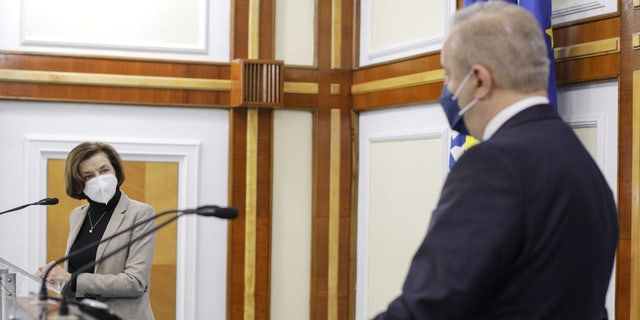 French Minister of Defence Florence Parly delivers a speech during a joint press statement with the Romanian Minister of Defence Vasile Dincu, in Bucharest, Romania, January 27, 2022. Inquam Photos/Octav Ganea via REUTERS ATTENTION EDITORS – THIS IMAGE WAS PROVIDED BY A THIRD PARTY. ROMANIA OUT. NO COMMERCIAL OR EDITORIAL SALES IN ROMANIA

Romanian President Klause Iohannis said Wednesday that his country stands ready to host a substantial number of NATO troops. The country already maintains a multinational land force of up to 4,000 troops, and the U.S. has soldiers stationed at separate bases in Romania and Bulgaria, Reuters reported.

“The measures NATO has taken until now to reinforce its military presence on the eastern flank are an eminently defensive response to the rising security challenges in the region,” Iohannis said.

French Minister of the Armed Forces Florence Parly pledged to help bolster military ties with Romania, including the acquisition of French naval ships, according to ABC News.

“The current security situation is worrying on the eastern flank of Europe,” Parly told the media after the meeting. “In this context, Romanians are rightly anxious to strengthen their own security, as tensions in Ukraine continue to escalate … we understand your situation and want to support you.”

Even Denmark deployed fighter jets to Lithuania, and both Spain and Denmark deployed frigates to the Baltic Sea. NATO started a “major military exercise” in the Mediterranean Sea on Monday, which included the USS Harry S. Truman aircraft carrier, as a demonstration that the alliance is “united, capable and strong.”