Dozens of Christian Navy SEALs file lawsuit over Covid vaccine mandate saying they have been wrongfully DENIED religious exemption and in some cases ‘threatened or harassed’ to comply: ‘An attempted ideological purge,’ counsel says

The suit, which lists 35 unnamed service members, argues that the Pentagon is overstepping its bounds as a federal body and is infringing upon their constitutional rights, with the Navy requiring them to be fully vaccinated by November 28 – after they have been denied a religious exemption for getting the jab.

According to the filing, which was obtained by DailyMail.com, the SEALs behind the suit are all Christian and are pushing back against the mandate because it contradicts ‘their sincerely held religious beliefs.’ 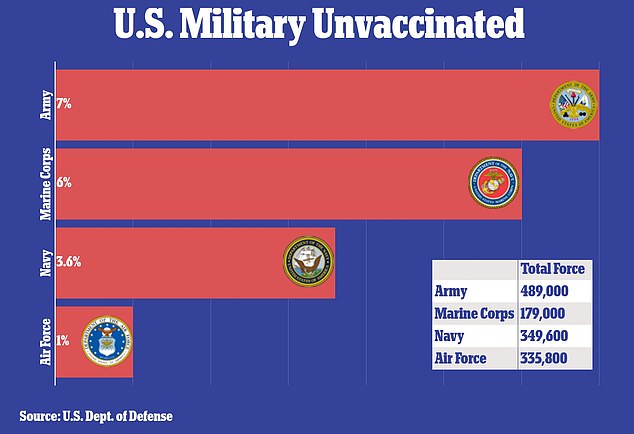 It is estimated that about 99.4% of the U.S. Navy is vaccinated, according to Defense Department data. The Department of Defense oversees multiple branches of the US military, including the Navy, and is named in the suit obtained by DailyMail.com

The First Liberty Institute filed on behalf of the group. The organization is the country’s largest nonprofit legal firm and is exceedingly prominent in circles among the Christian right, specializing in First Amendment cases on religion.

In some cases, it argues, SEALs are reportedly being threatened and, in a few instances, purportedly harassed into complying with the demand – and have also been flat-out denied a religious exemption.

‘The fact that the government has not granted a single religious exemption from the vaccine mandate shows that the Biden Administration does not care about religious freedom,’ First Liberty Institute’s general counsel Mike Berry said in a statement to DailyMail.com on Wednesday.

‘Instead, this appears to be an attempted ideological purge. Forcing a service member to choose between their faith and serving their country is abhorrent to the Constitution and America’s values. After all these elite warriors have done to defend our freedoms, the Navy is now threatening their careers, families, and finances. It’s appalling and it has to stop before any more harm is done to our national security.’ 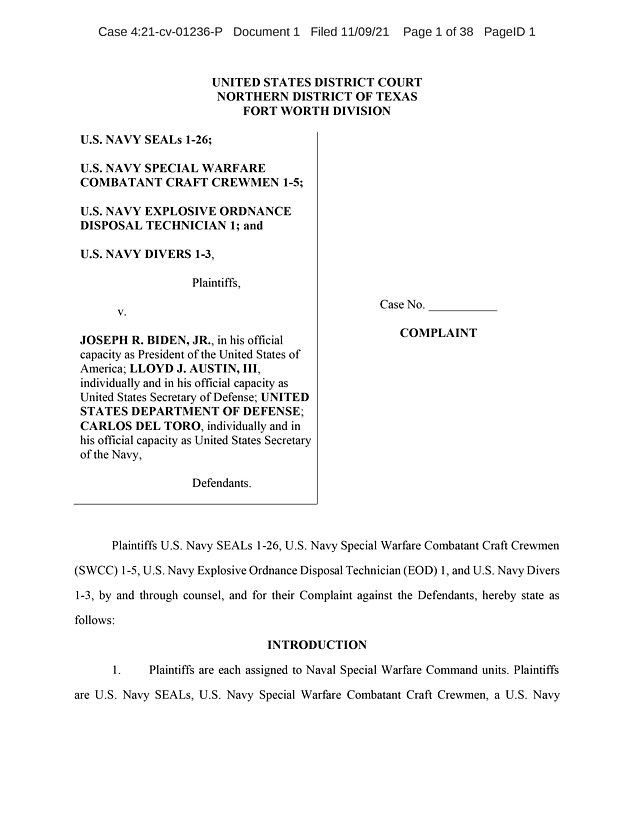 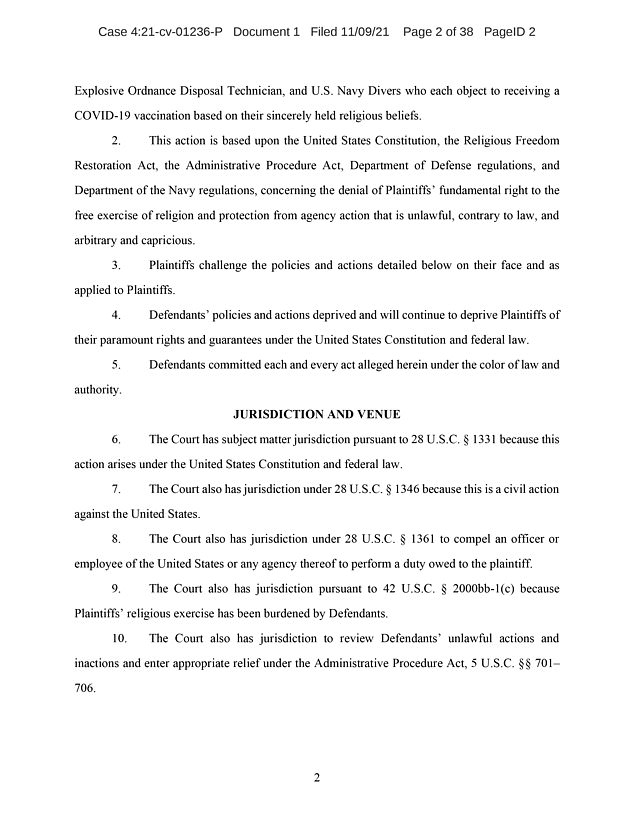 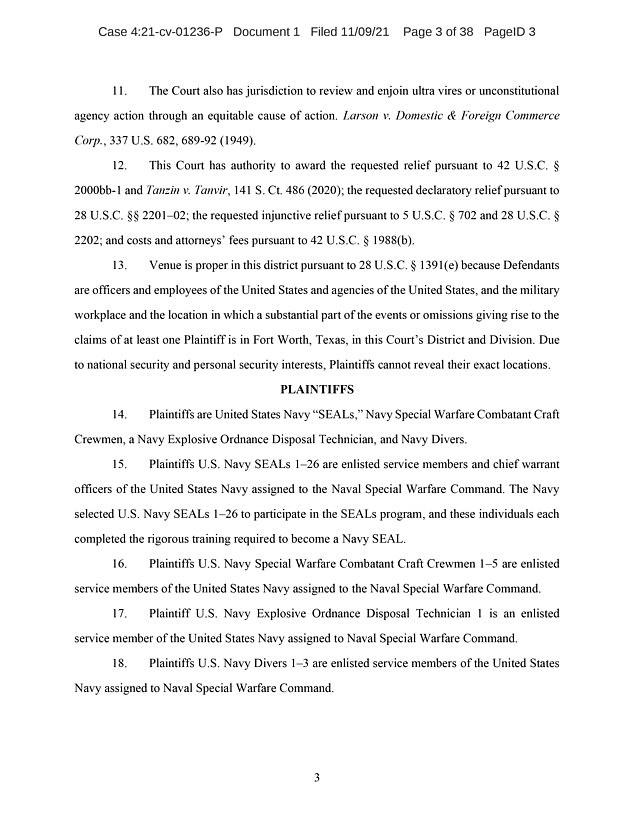 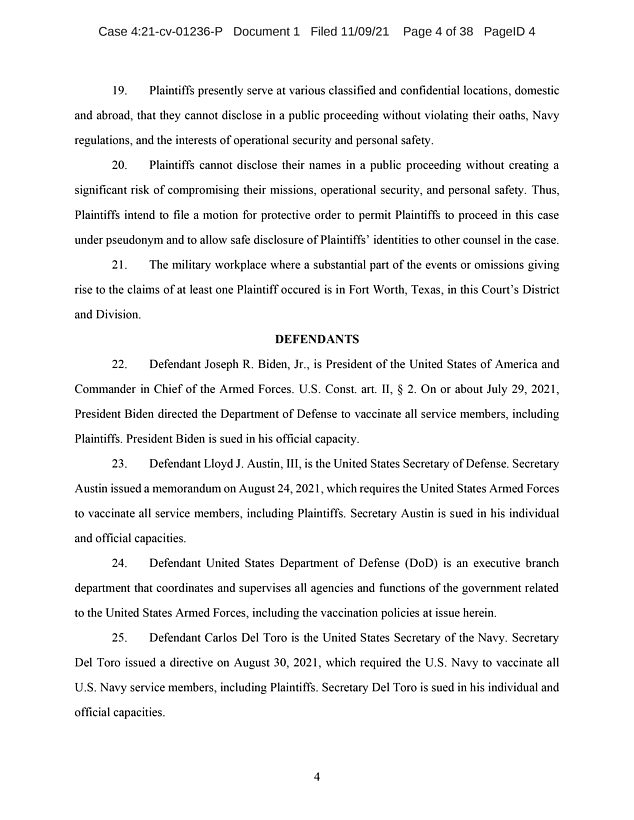 The suit, which lists 35 unnamed service members, argues that the Pentagon is overstepping its bounds as a federal body and is infringing upon their constitutional rights, with the Navy requiring them to be fully vaccinated by November 28 – after they have been denied a religious exemption for getting the jab 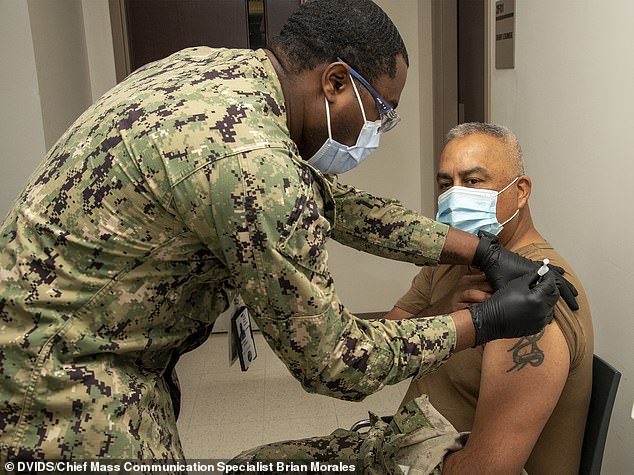 The SEALs behind the lawsuit, filed Tuesday by the First Liberty Institute, are all Christian and are pushing back against the COVID mandate because it contradicts ‘their sincerely held religious beliefs’

The Tuesday filing comes as the November 28 deadline for vaccination of active-duty U.S. Navy service members looms. Other branches have implemented different timelines for vaccination, such as the Air Force, which saw its deadline on November 3 and said about 97 percent of active-duty members were inoculated. President Joe Biden had announced that the federal government is requiring all employees to get the jab by November 22 and all government contractors have until Jan. 4, 2022.

The suit has surfaced amid reports of a growing number of SEALs seeking religious exemptions to the mandate who are reportedly being threatened and, in a few instances, purportedly harassed into complying with the demands set forth by the Department of Justice – which oversees all U.S. Military departments, including the Navy and the SEALs.

The Navy has said it will punish service members who forego mandated vaccinations, threatening to hand out court-martials, demotions, pay cuts and travel bans on those who don’t get the jab by the end of November.

The lawsuit, first reported by Fox News, cites specific instances of SEALs being threatened with such punishments.

The filing further reveals that the Navy even went as far as to warn several of the plaintiffs that if they sought a religious exemption, the Navy would confiscate their Special Warfare pins – such as the famous SEAL ‘Trident’ – that they proudly wear on their uniforms. 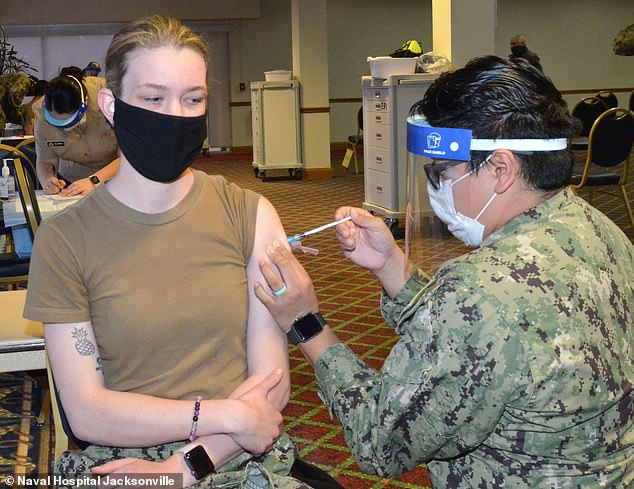 The 35 SEALs represented in the suit attest that their religious beliefs as Christians, namely those in opposition to abortion, do not allow them to receive medications ‘tested or produced using aborted fetal cell lines’

The filing focuses on the Department of Justice’s hesitance to grant religious exemptions to its members and argues why the department’s denial of said requests violates both the U.S. Constitution and the Religious Freedom Restoration Act (RFRA).

The Navy, in particular, is quick to hand out such denials to its servicemembers, the suit claims.

First Liberty Institute argues in the suit that specific SEALs who the firm is representing are being designated as ‘non-deployable’ merely because they requested religious exemptions.

The federal lawsuit states that Navy leadership’s ‘threat of non-deployability substantially pressures Plaintiffs to take an action (receiving a COVID-19 vaccine) that would violate their religious beliefs,’ which, First Liberty argues, violates these SEALs’ rights under RFRA to exercise their own religion.

The SEALs represented in the suit also attest that their religious beliefs as Christians, namely those in opposition to abortion, do not allow them to receive medications ‘tested or produced using aborted fetal cell lines.’

The SEALs also argue that the ‘human body is God’s temple’ – meaning they meticulously monitor everything that they put into their bodies and are ‘compelled to avoid anything that adversely modifies or may modify their bodies’ natural processes in a manner not designed by God.’

Some younger SEALs are particularly concerned about the vaccine’s side effects, which include a heightened risk of myocarditis – a potentially fatal condition that has surfaced in some young males who have gotten the jab, according to the lawsuit.

Several of the SEALs received a formal warning from the Department of Defense saying those ‘who refuse to receive the COVID-19 vaccine based solely on personal or religious beliefs will be disqualified from [special operator] duty (unless the disqualification is separately waived by BUMED),’ the lawsuit states. ‘This will affect deployment and special pays. This provision does not pertain to medical contraindications or allergies to vaccine administration.’

Despite their clients stating reasons that the firm says would warrant religious exemption, First Liberty Institute says not a single plaintiff has had such an accommodation request approved, and many have had their petitions flat-out rejected.

Unlike religious requests, medical exemptions from the military after the mandate was issued have been granted to several service personnel.

It is estimated that about 99.4% of the U.S. Navy is vaccinated, according to Defense Department data. 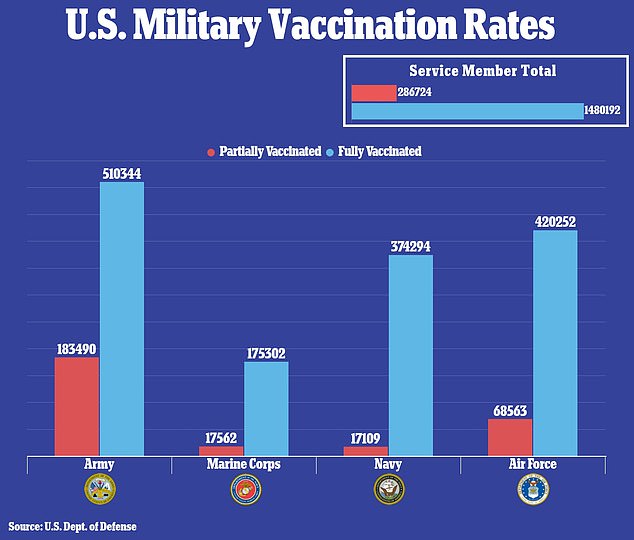 The US Military released vaccination rates across the branches with its most recent data from November 3, detailing how many service members are fully versus partially vaccinated

Airline will only allow international travellers who have had Covid vaccine

Just when Italy really needed some unity, the EU failed it – and continues to do so