Jerusalem: Israeli President Reuven Rivlin asked Prime Minister Benjamin Netanyahu on Wednesday to try forming a new governing coalition, moving the country into the next phase of its post-election haggling.

"The law gives you, Mr Prime Minister, 28 days, starting tomorrow, to form a government," Rivlin said as the two stood together at the president's residence.

Rivlin's decision to offer Netanyahu the first go at forming a government came on the day that official results from last week's election were finalised, showing that the prime minister's Likud party had secured one seat fewer in the parliament than the rival Blue and White party headed by Benny Gantz. Neither of the two main parties is close to a 61-seat majority. 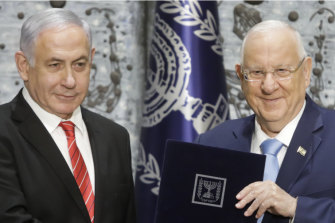 Prime Minister Benjamin Netanyahu has been given 28 days by President Reuven Rivlin to form a coalition capable of governing Israel.Credit:AP

But a plurality of all the newly elected parliament members told Rivlin they preferred Netanyahu, earning him the president's nod.

"I accept the mission," said Netanyahu, acknowledging the long struggle he is likely to face in building a majority coalition within Israel's fractured political system.

"I do this knowing that I don't have a higher chance of forming a government, but that I have less of an inability than Gantz."

Netanyahu's path to forming a governing coalition is lined with hazards. He has pledged to include ultra-Orthodox Jewish factions, and that will likely deter potential secular partners. He has also endorsed sharing power with Blue and White, but Gantz promised during the campaign never to join forces with Likud unless Netanyahu stepped down.

Adding to the drama and uncertainty, the prime minister faces a legal hearing Wednesday in three corruption cases involving allegations of bribery, fraud and breach of trust. The heading could lead to his indictment.

If Netanyahu ultimately fails to assemble a majority in the parliament, known as the Knesset, he will have to return the mandate to the president. By tradition, Gantz would then be given a chance to form a government.

Rivlin called the two candidates to his official residence two times this week in an attempt to broker a power-sharing arrangement between the major parties. But after three days of negotiations failed to produce a deal, he acted.

The president is obliged to select the candidate he thinks has the best chance of assembling a majority coalition. In a tally of recommendations from Knesset members, Netanyahu was preferred by one more member than Gantz, and Rivlin cited this slight edge. 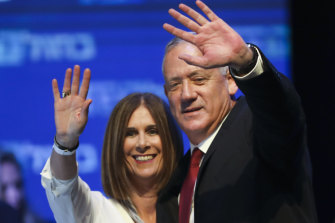 "The probability of the prime minister forming a government is greater at this moment," Rivlin said.

In moving so fast, Rivlin may have been looking at a difficult calendar. Israel is about to enter a period of religious holidays, with Rosh Hashanah, the Jewish new year beginning on Sunday evening, and several others to soon follow.

"He's clearly trying to get things moving as quickly as possible," said Jason Pearlman, a one-time media adviser to Rivlin. Pearlman. "[Netanyahu] has got one more recommendation than Gantz does, so it would be logical for him to take first bite of the cheese."

Rivlin's choice of Netanyahu advances Israel's complex electoral process to the next phase, but it does not move the country much closer to a resolution of the political gridlock that has consumed it for much of the year.

Netanyahu has embraced the idea of sharing power with Gantz's party. Rotating the prime minister's job would not only let Netanyahu extend his decade in power, it may be his best hope of avoiding prosecution over the next months. Observers here speculate the real negotiations will come down to who takes the top job first in a unity government.

"We need this unity, this national reconciliation," said Netanyahu. "We have been through a tough election campaign and now we need to unite the people."

But Gantz doubled down on his pledge not to serve with Netanyahu.

"Blue and White, led by me, does not agree to sit in a government whose leader is facing a severe indictment," he said in a statement. "This issue, among a number of other critical factors, is more important to us than any delegation of ministerial posts or a rotation."

Netanyahu will have at least four weeks to build a 61-seat majority and the possible options are many. Israelis are constantly shifting through the scenarios, which range from Netanyahu and Gantz sharing the prime minister's job to another collapse of the process leading to Israel's third election of the year.

Representatives of the two ultra-Orthodox parties – Shas and United Torah Judaism – and Yamina, a religious nationalist faction of three smaller parties, pledged support for Netanyahu in their meetings with the president on Sunday and Monday. Their backing brings the number of Knesset members backing Netanyahu to 55.

Gantz drew support from two left-wing parties, Labor and the Democratic Union, adding 11 members to the 33 from Blue and White. He also received backing for the first time in three decades from a union of Arab parties, and that gave him an additional 10 votes.

But three parliamentarians from the Arab nationalist party Balad ultimately refused to throw their support to Gantz, citing his military record in the West Bank and Gaza. The withdrawal of their votes put Netanyahu ahead by a single recommendation.

Arab parliamentarians are unlikely to be invited to join a coalition.

Hawkish former defense minister Avigdor Liberman also refused to support either candidate. In the past, Liberman, who shares the prime minister's right-wing positions on security, has put his support behind Netanyahu. But it was Liberman's refusal to join a government with the ultra-Orthodox that sent the country to an unprecedented second election.

In that vote, Liberman doubled his Yisrael Beitenu party's presence in the Knesset, drawing eight seats. He has said that he wants to see a centrist, secular, unity government between Likud and Blue and White, minimising the influence of sectoral parties.