Bullet-shaped plane that can travel at 460mph for more than 4,500 miles, costs just $328 per hour to operate and is set to revolutionize private air travel is unveiled

The much-anticipated Celera 500L ‘bullet’ plane which is set to revolutionize private air travel has been revealed.

Yet, it can still fly at jet speeds with a maximum cruising speed of 460 miles per hour, while having a range of more than 4,500 miles, twice that of other aircraft the same size. 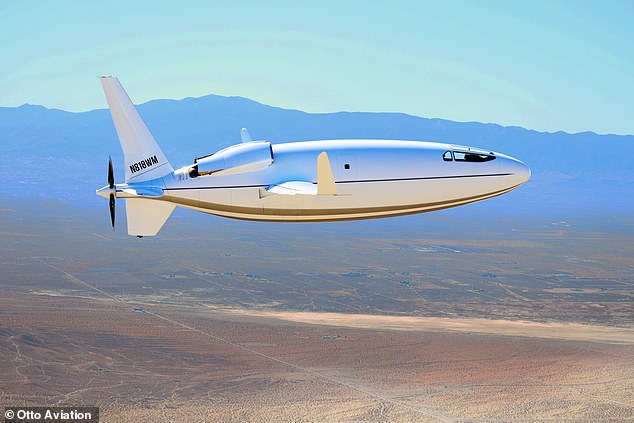 The first official images of the Celera 500L were launched this week. Its developer Otto Aviation claims is will revolutionize private air travel with its low costs and speed

It has the capability to run at 18 to 25 miles-per-gallon fuel economy compared to the 2-3 miles-per-gallon used by a comparably sized jet aircraft, driving hourly operating costs down to at $328 per hour.

According to a press release from Otto Aviation Wednesday, this makes it the ‘most environmentally friendly airplane in its class and presents a major leap forward in the effort to develop a zero-emission air transportation system’.

The company additionally hopes the decreased costs will make private travel more competitive with commercial options and open the market up to a large segment of new travelers.

It says it could supply direct access to over 5,000 regional airports, allowing passengers to avoid airport congestion and arrive closer to their destinations.

It claims the range and speed makes the aircraft a suitable option as an air taxi also, that can ferry travelers between any two cities in the continental United States without needing to refuel.

‘Innovation at its core is solving a problem without conventional bias. Our goal was to create a private aircraft that would allow for direct flights between any city pair in the U.S. at speeds and cost comparable to commercial air travel,’ said William Otto Sr., Chairman and Chief Scientist of Otto Aviation in a statement.

‘In many cases, individuals and families will be able to charter the Celera 500L at prices comparable to commercial airfares, but with the added convenience of private aviation.

‘We believe when the price of private air travel is competitive with commercial air travel, an enormous market opportunity will result.’ 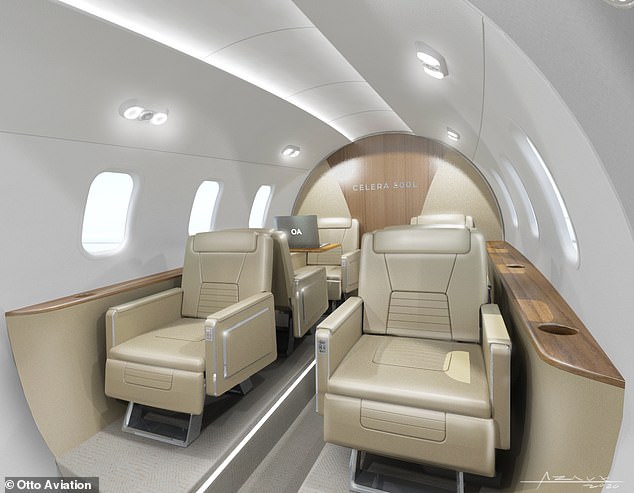 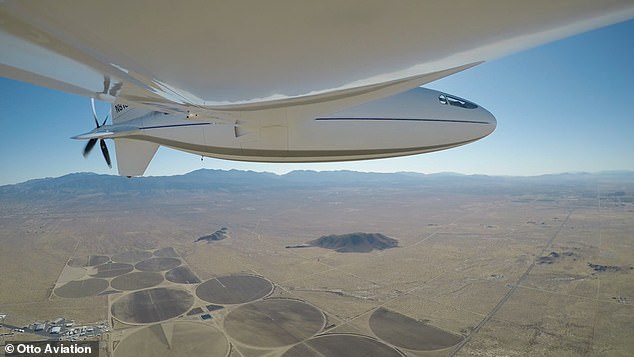 The aircraft can travel more than 4,500 miles without needing to refuel

Otto Aviaton believes the jet could also be used for commercial operations with low costs per pound of payload and its ability to transfer between US cities at high speeds making it an option for next-day delivery freight.

The company believes this aspect has massive potential, especially given the large demand for online shopping and delivery during the coronavirus pandemic.

‘We believe the Celera 500L is the biggest thing to happen to both the aviation and travel industries in 50 years,’ Otto adds.

‘Beyond using our aircraft for passenger travel, it can also be used for cargo operations and military applications. Since the results from our prototype test flights have been so promising, we’re ready to bring the Celera 500L to market.’

To date, the Celera 500L has complete 31 test flights that appear to have proven the capabilities of its unusual design.

It is powered by a RED A03 engine with a liquid-cooled V12 twin six-cylinder bank and is certified to operate on Jet A1 and biodiesel.

The company claims that the impressive speeds are all down to laminar flow, which it explains on its website as the minimum drag solution for aircraft surfaces, featuring smooth layers of airflow with little to no mixing of adjacent layers.

Laminar shapes were used for the wing and tail sections and the fuselage takes advantage of an optimum length-to-width ratio.

Inside the cabin, the aircraft does not shirk on comfort as the teardrop design opens up space. There are six first-class customization seats and the cabin stands 6 foot 2 high. 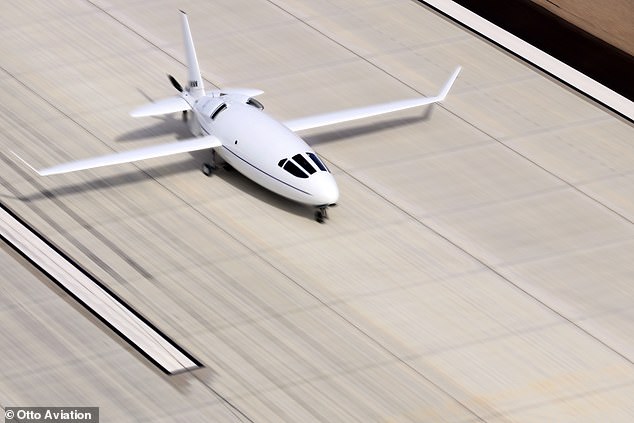 The current version does not come with windows in the passengers’ cabin but owner William Otto said the design would be the same. Pictured, a design for the model with windows

The current version does not have windows in the cab but Otto told CNN Travel that they will come.

‘The windows will not have an impact on laminar flow, as they are mounted flush and have the same contours as the exterior shape of the fuselage,’ he explained.

There had previously been a remarkable amount of secrecy surrounding the aircraft that was spotted undergoing tests as far back as 2017 and led to much curiosity over its unusual design.

In 2019, it was also spotted doing taxi tests with NASA pilot Scott Howe at the Southern California Logistics Airport in Victorville, which is northeast of Los Angeles.

Otto Aviation, founded in 2008 as an offshoot of Bill Otto’s Otto Laboratories,  launched the aircraft’s website and first press release on Wednesday, however, as they revealed their plans for the next stage of development.

While the aircraft has been designed with civilian and commercial operations in mind, the website also notes that it could also eventually have military applications and be used as a drone. 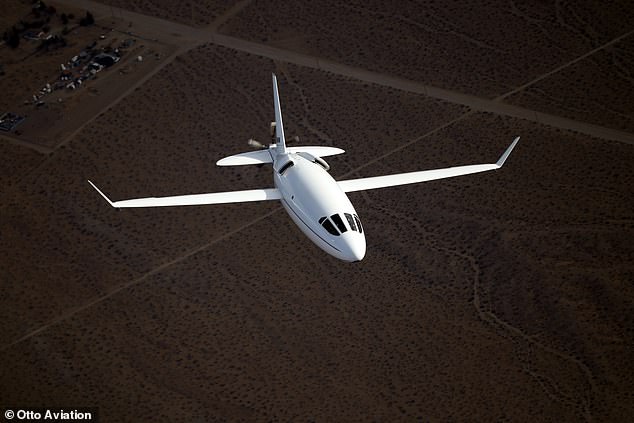 ‘The unique long-range capability of the Celera 500L allows for efficient transportation to remote bases and communities previously only served by larger and more costly aircraft.

‘The Celera 500L has significant potential as a drone because its combination of range, speed, service ceiling and cost are unattainable by existing unmanned aerial vehicle,’ it adds.

The company also has plans to expand further, stating that the current design of the plane could be increased by 20 percent to allow for more passengers and cargo.

The Celera 100L would double the cabin volume and have the ability to fit five D-sized shipping containers, a standard in larger scale air cargo.

The next step for the company is now another round of funding, to begin the FAA certification process and to establish a manufacturing facility before they can begin to sell.

Otto believes that the the first commercial deliveries of the Celera 500L could begin by 2025.

It all comes as a difficult time for air travel as the coronavirus pandemic dectimates the travel and tourism industry.

Yet Otto Aviation remains hopeful that it remains an ideal time for the Celera 500L to launch, with travelers more open to spending money on provate travel rather than risk the chance of infection from strangers on a commercial flight.

‘Launching amid the current aviation landscape has only bolstered what we aim to provide with the Celera 500L,’ Otto told CNN Travel. ‘We believe that when the price of private air travel is competitive with commercial air travel, an enormous market opportunity will result.’

‘Of course, we didn’t anticipate Covid-19 but there are enhanced market opportunities in being able to afford to fly with only those you choose to. Being able to avoid crowded airports and lines is another big benefit,’ he added.

'Just one case': fears coronavirus may spread like wildfire in world's refugee camps