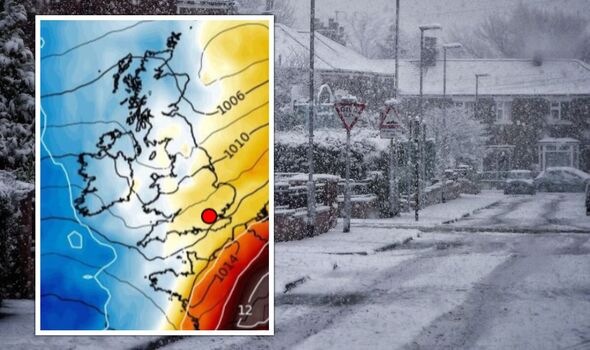 Temperatures across Scotland will plunge to -8C this weekend while the south-eastern fringes of England rocket to 14C.

Bitter cold air from the Arctic will spill across the north while a plume of sub-tropical air from Morocco and Algeria warms southern coasts.

It comes as parts of Europe ditch winter coats for t-shirts as the continent is engulfed by a simmering African surge.

Jim Dale, meteorologist for British Weather Services, said: “Milder air originating from Africa will touch the southeast this weekend pushing temperatures into double figures while at the same time the Polar front is pushing down from the north.

“This will bring a north-south split and in the middle will be a more temperate region in terms of temperatures, but where these air masses meet, it is likely to be more unsettled.

“As low-pressure systems trundle in from the Atlantic, we could see wind, rain and possibly snow developing in the 24 to 48 hours over New Year.

“The weather in this state is very changeable, though, so it is something we will be keeping our eyes on through the coming days to see how things develop.”

The weather in southern Britain will come under the influence of a freak winter sizzle sweeping across Europe.

High pressure building from the Azores Islands, similar to this summer’s historic heatwave, will turn the thermostat up across the Continent.

Temperatures in parts of Europe could hit 20C-plus through the coming days, tempered by the seasonal tilt of the Earth weakening the strength of the sun.

Mr Dale, author of ‘Weather Or Not?’, said: “If we were in the summer months, this weather set up would be driving another 40C heatwave.

“It is very unusual to see these sorts of temperatures across Europe at this time of year.

“In the UK, we will only get a slight brush of this to the far southeast, and with the cold to the north we are looking at a New Year north-south split.”

Weather models show temperatures rocketing into the mid-teens across the south while the north plunges close to minus double figures.

Stormy systems will swing in from the Atlantic bringing wind and rain across the country.

Government forecasters are warning of a wet and windy New Year with northern Britain in the firing line to bear the brunt of the assault.

Met Office deputy chief meteorologist Helen Caughey said “It’ll be an unsettled New Year weekend for much of the UK.

“New Year’s Eve for most will be the wetter of the two days, with a number of fronts bringing rain and wind across much of the country.

“Much of Scotland will see a largely dry day, with just the odd shower, before a more persistent band of rain and hill snow arrives.”

Foul weather should ease across southern Britain on Sunday although Scotland faces rain turning to snow, she warned.

She said: “This will be followed by a more mixed New Year’s Day, with Scotland seeing the bulk of the unsettled conditions, with spells of rain, turning to snow over higher ground, continuing to push north.

“While it will be mild across the south, it will remain colder in the north with an ice risk in places here early on Sunday.

“Elsewhere, a drier day is expected, although with some showers, mainly across western areas, ahead of conditions becoming more widely settled into Monday.”

Crews on lookout for pets in Florida condo building collapse