That’s ruffled some feathers! New Zealand’s Bird of the Year contest is won by a BAT as victory is branded a ‘total farce’

A bat has won New Zealand’s 2021 Bird of the Year, infuriating bird-lovers in the country.

It is the first time New Zealand’s only native land mammal has been included in Forest & Bird’s annual contest.

After a two-week campaign that ‘nearly broke the internet and turned friends against one another’ the long-tailed bat, also known as pekapeka-tou-roa, won the competition. 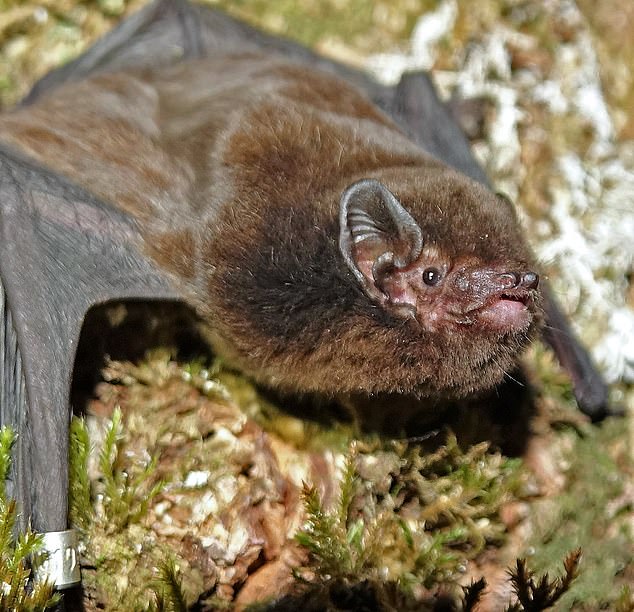 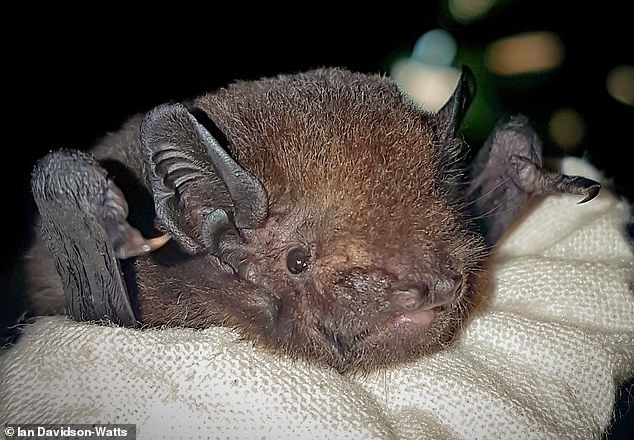 Yet the victory infuriated some people.

Fuming Twitter users called it a ‘total farce’ and said the win had ‘eroded faith in the democratic process’.

Another bird-lover said there needed to be a recount by conservation organisation the Forest and Bird, which runs the competition.

However, some people celebrated the win. Social media user Sophiane said: ‘Thank you for bringing awareness to this amazing species.’

Bird of the Year spokeswoman Laura Keown said: ‘I think I’m going to be fired.

‘The campaign to raise awareness and support for this little flying furball has captured the nation.

‘A vote for bats is also a vote for predator control, habitat restoration, and climate action to protect our bats and their feathered neighbours.’ 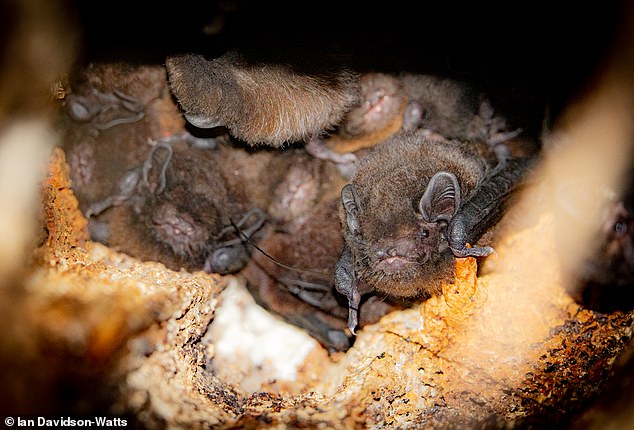 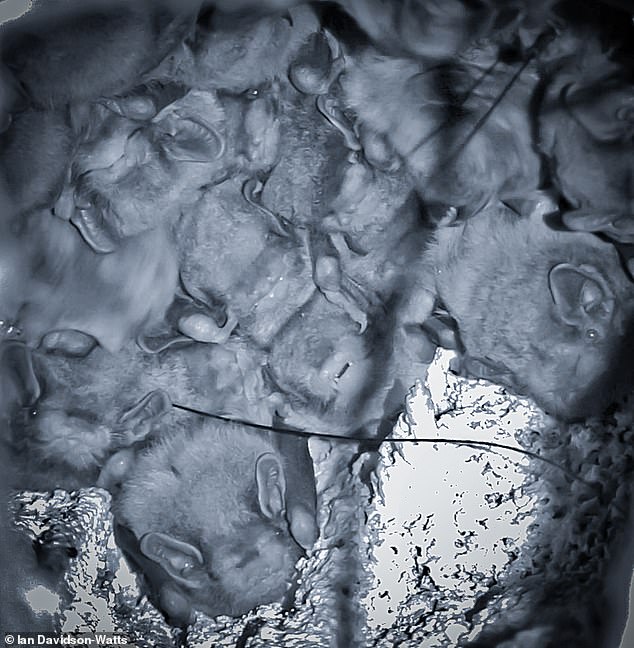 She said: ‘A vote for bats is also a vote for predator control, habitat restoration, and climate action to protect our bats and their feathered neighbours.’ Pictured: The long-tailed bats at night as they start to rouse

Ben Paris is a senior conservation advisor at Auckland Council and a New Zealand Batman.

He said: ‘Long-tailed bats, or pekapeka-tou-roa, are a unique part of Aotearoa’s biodiversity, but lots of people don’t know they even exist.

‘There are pekapeka projects spanning the whole country with conservation communities doing great work with our bats.

The controversial win by the long-tailed bat left some bird-lovers fuming. One social media user called it a ‘total farce’ 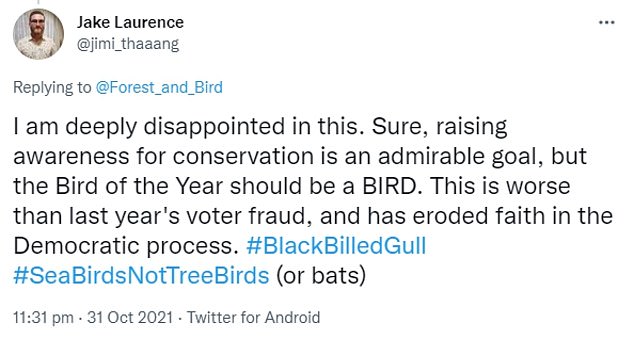 ‘The more citizen scientists we have out there looking for pekapeka the more conservation work we can do to understand and help them.

‘These bats were added to Forest & Bird’s competition to help people get to know them, and their story has flown around the world.’

The competition began seven years ago as a way to raise awareness about New Zealand’s native birds, many of face extinction. 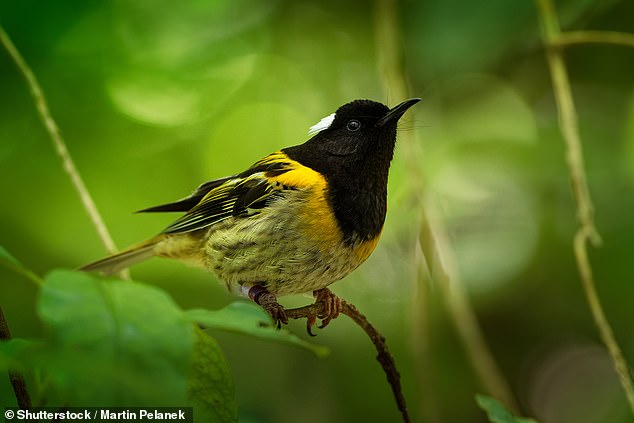 The hihi – a songbird which boasts extra large testicles – was one of the competitors at last year’s New Zealand’s Bird of the Year. It was endorsed by a local sex shop but was beaten by the kakapo, or owl parrot (File image)

It has proved extremely popular with even the country’s top politicians wading into the debate.

Last year a songbird that boasted extra large testicles was among the contenders competing to be crowned New Zealand’s Bird of the Year after it was endorsed by a local sex shop. 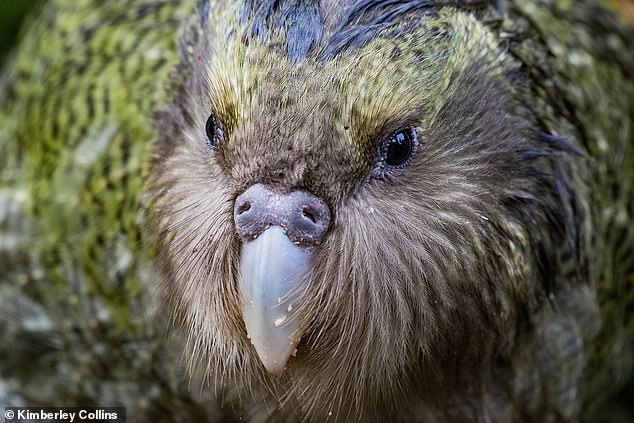 Last year the kakapo, or owl parrot, won the competition. The large, flightless and nocturnal bird lives on the ground as opposed to in a tree nest and typically has light green plumage 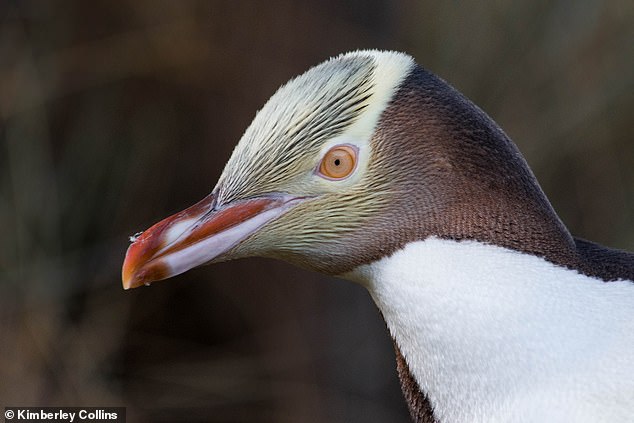 The yellow-eyed penguin stole the show in 2019 with its piercing gaze and pointed beak. The penguin is piscivorous, meaning it primarily eats fish 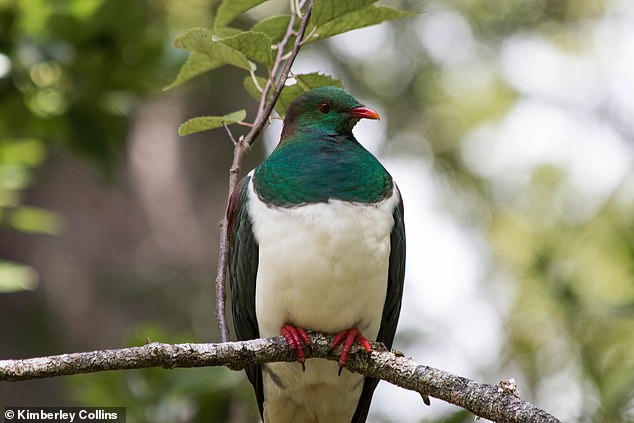 The winner of the 2018 competition was the kereru, a New Zealand pigeon with a white breast and a shimmering green-blue neck and head

The hihi, also known as the stitchbird, is a medium-sized songbird that inhabits the mature native forest of some of New Zealand’s smaller islands.

According to New Zealand Birds Online, the hihi has the notable distinction of having testicles ‘four times larger than expected’ based on its body size.

Its sizeable scrotum was just one of the attributes that attracted the support of the Adult Toy Megastore, which nominated the hihi in the country’s much-loved annual competition.

Polyamorous partnerships – unusual among birds – are the reason for the hihi’s larger loins as more sperm is required to mate with multiple females.