The NHS website crashed again this morning as hundreds of thousands of Britons rushed to book their Covid-19 booster doses just hours after Boris Johnson said it would open up to all adults in the country from today.

Those trying to book an appointment on the website were greeting with a message saying: ‘The NHS website is currently experiencing technical difficulties. We are working to resolve these issues. Thank you for your patience.’

It comes after the Prime Minister confirmed in a televised statement last night that he had turbocharged the booster programme, as the deadline to offer all adults a third jab is being brought forward by a month.

The Army will be drafted in and clinic hours extended to help dose 18million people by January 1 – nearly a million a day – as the PM warned of a ‘tidal wave’ of Covid that could overwhelm the NHS and cause ‘very many deaths’.

Mr Johnson said the ‘Omicron emergency’ meant boosters were vital to ‘protect our freedoms and our way of life’. Within minutes of his announcement, the NHS website crashed as thousands flocked to secure appointments.

Then again this morning, the NHS website was initially putting people in an online queue of more than 5,000 people shortly after 7am, saying that ‘lots of people are trying to book an appointment.’

Moments later while people were waiting, a message was displayed that the website was ‘currently experiencing technical difficulties’, and those trying to book a jab had to go back one webpage and try again. 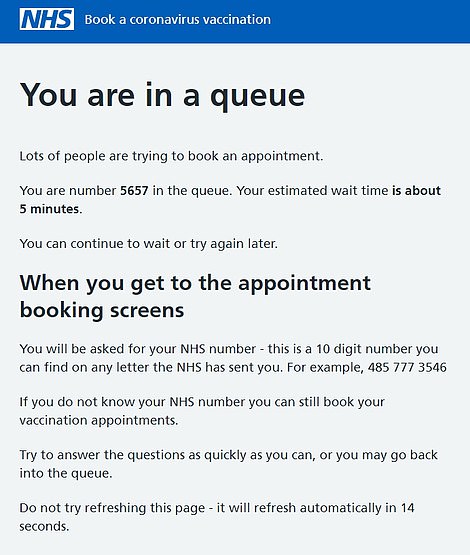 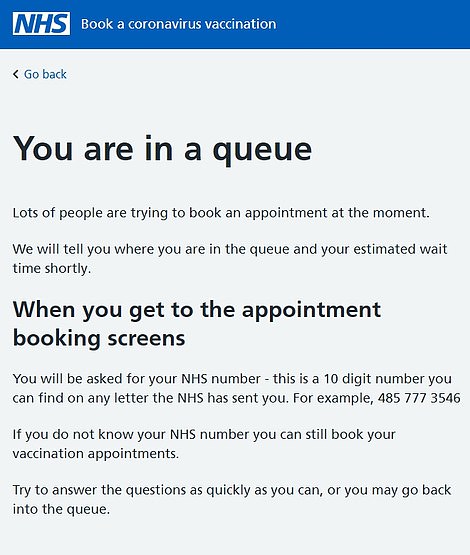 Then, people were again put in a queue, but the NHS website was no longer listing the number of people in it, and simply said: ‘You are in a queue. Lots of people are trying to book an appointment at the moment.’

The NHS will have to postpone some planned appointments in order to meet the target of giving every adult in England a Covid-19 booster jab by the end of the year.

One in three women suspected of having breast cancer are waiting longer than two weeks for critical appointments, figures reveal.

NHS targets say most people urgently referred by their GP for suspected breast cancer should see a specialist within 14 days. But as hospitals struggle with Covid backlogs, this is not being met for thousands.

It means that cases are going undiagnosed for longer – delaying treatment.

Latest figures from NHS England show the number of breast cancer referrals not seen within in two weeks more than doubled in October. The target was missed in 12,905 cases, which was 29.1 per cent. This was a dramatic increase on the month before when 5,280 cases (12.5 per cent) did not get appointments within the timeframe.

Macmillan Cancer Support said the number of women being diagnosed with the disease at stage 4 was as much as 48 per cent higher in some months than expected.

Labour’s health spokesman Wes Streeting said: ‘No one should be left waiting and wondering for weeks on end when it comes to cancer. We need urgent answers on why under this Government the number of patients left waiting has risen so severely.’

A Department of Health spokesman said: ‘We are committed to ensuring people get the treatment they need.’ Cancer care remained a priority, they added.

Nursing leaders have expressed concern about the ‘scale and pace’ of the vaccine programme expansion – which will aim to jab almost a million people every day – while a charity said the Government must ensure NHS cancer services are ‘prioritised and protected’.

Mr Johnson, in a pre-recorded address to the nation yesterday evening, said Britain ‘must urgently reinforce our wall of vaccine protection’ as he set the new deadline of jabbing everyone over 18 by the new year.

He said scientists had discovered that two doses of a vaccine is ‘simply not enough’ to prevent the spread of the new variant and that, without a lightning speed mass booster campaign, the NHS could be overwhelmed.

The mission to administer millions more jabs by December 31 will see 42 military planning teams deployed across every health region.

Extra vaccine sites will be opened and additional mobile units deployed, clinic opening hours are to be extended to allow people to be jabbed around the clock and at weekends, while thousands more vaccinators will be trained.

Mr Johnson said: ‘To hit the pace we need, we’ll need to match the NHS’s best vaccination day so far – and then beat that day after day. This will require an extraordinary effort.

‘And as we focus on boosters and make this new target achievable, it will mean some other appointments will need to be postponed until the new year.

‘But if we don’t do this now, the wave of Omicron could be so big that cancellations and disruptions, like the loss of cancer appointments, would be even greater next year.’

The highest number of vaccinations reported in one day in the UK was 844,285 on March 20 2021 – equivalent to vaccinating the entire population of Liverpool in one day, according to the Government website.

In a direct plea to GPs, doctors, nurses and others on the NHS front line, who he said had ‘worked incredibly hard’ throughout the pandemic, Mr Johnson said: ‘I must ask you to make another extraordinary effort now, so we can protect you, and your colleagues, and above all protect your patients from even greater pressures next year.’

NHS England said GP teams will be asked to ‘clinically prioritise their services to free up maximal capacity’ to support the Covid-19 vaccination programme, alongside delivering critical appointments such as cancer, urgent and emergency care. 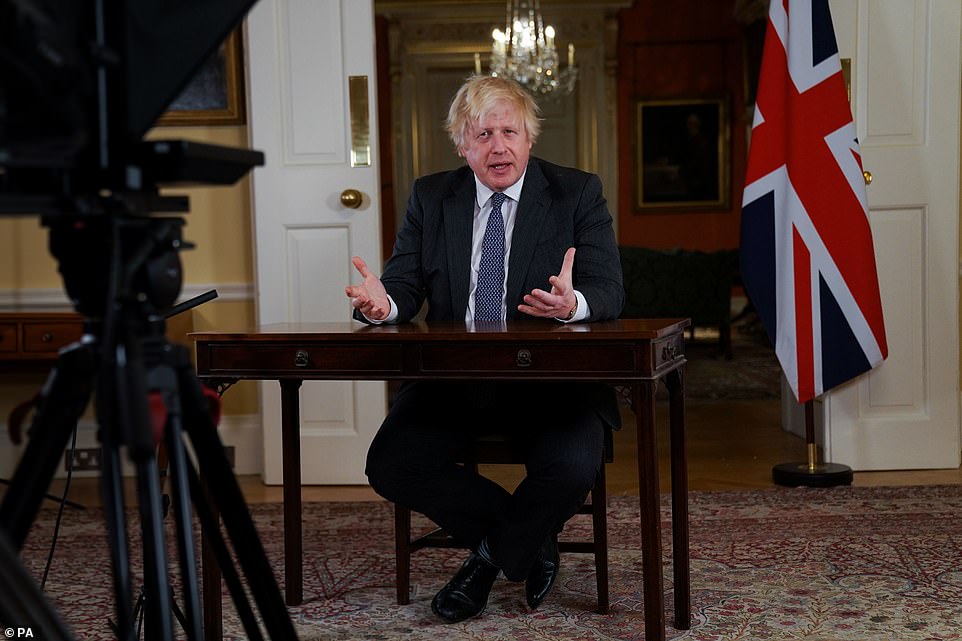 It said this ‘might mean that for some people, routine appointments are postponed as part of the national mission to roll out boosters’. 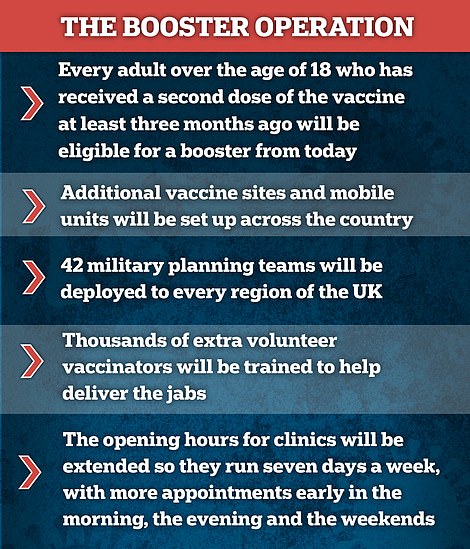 Steven McIntosh, executive director of advocacy and communications at Macmillan Cancer Support, said everyone can play a role in reducing pressure on critical NHS care by getting vaccinated, getting a booster jab and following Covid guidelines.

‘However, the Government also must not fail to ensure NHS cancer services are prioritised and protected this winter to ensure that nobody faces long waits and disruption in vital cancer care,’ he said.

Pat Cullen, general secretary and chief executive at the Royal College of Nursing, said nursing staff have already played a leading role in the delivery of vaccines and stand ready to do the same again.

‘However, we are concerned about the scale and pace of this expansion, given these same nurses are already facing huge demands under existing unsustainable pressures in every part of the UK health and care system,’ Ms Cullen said.

Chris Hopson, the chief executive of NHS Providers, the body representing NHS trusts, said the NHS will do everything it can to deliver the ‘hugely ambitious’ booster campaign, but is ‘already beyond full stretch’ and will ‘need to reprioritise’. 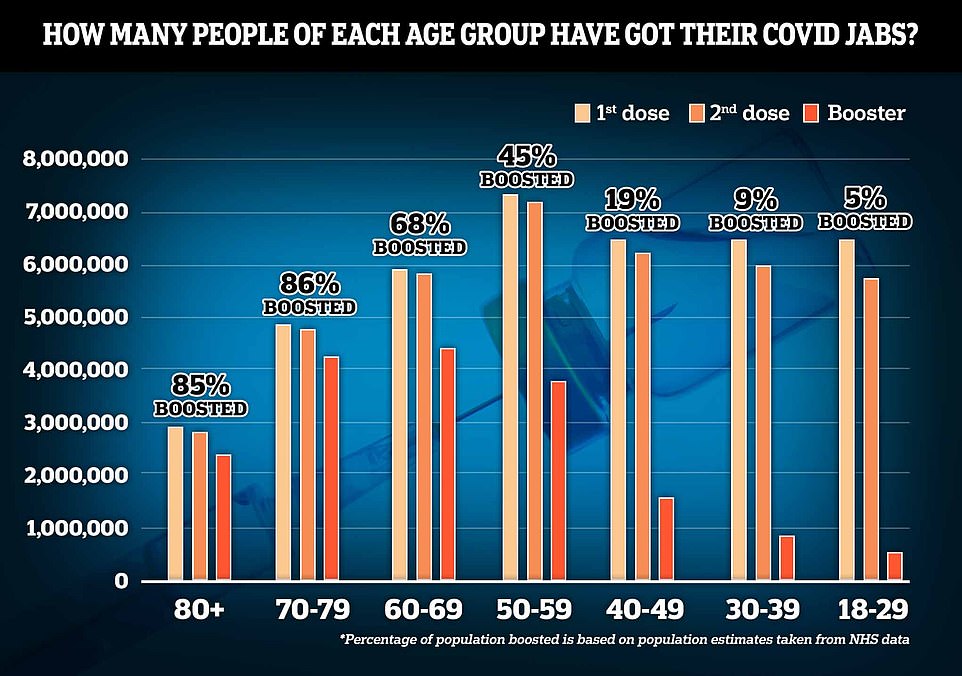 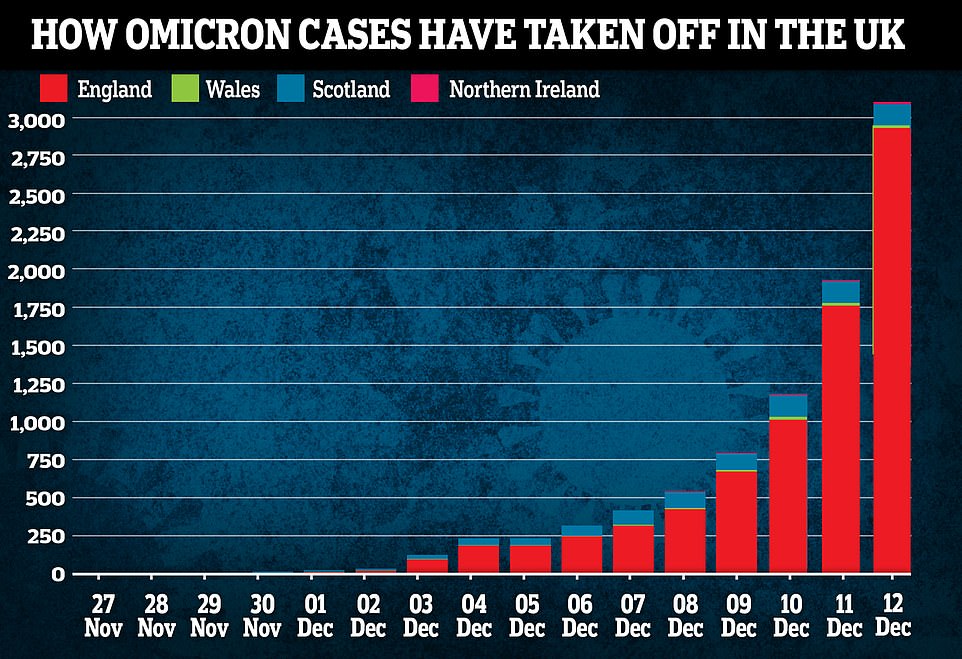 He said as more hospital staff become involved it is ‘likely to impact on planned care, causing some additional delays’.

Every adult over 18 in England who has had a second dose of a vaccine at least three months ago will be able to have their booster from Monday, Mr Johnson said.

He said the UK Government would support the devolved administrations to ‘accelerate’ their own rollouts of third jabs.

First Minister Nicola Sturgeon said Scotland would match the aim of offering boosters to all eligible adults before 2022, but added that more Covid-19 restrictions may still be needed to tackle the new strain.

Welsh leader Mark Drakeford also said ‘further steps’ could be required to keep the country safe, as he encouraged people to ‘make having your booster a priority’ amid a pledge to quicken the rollout. 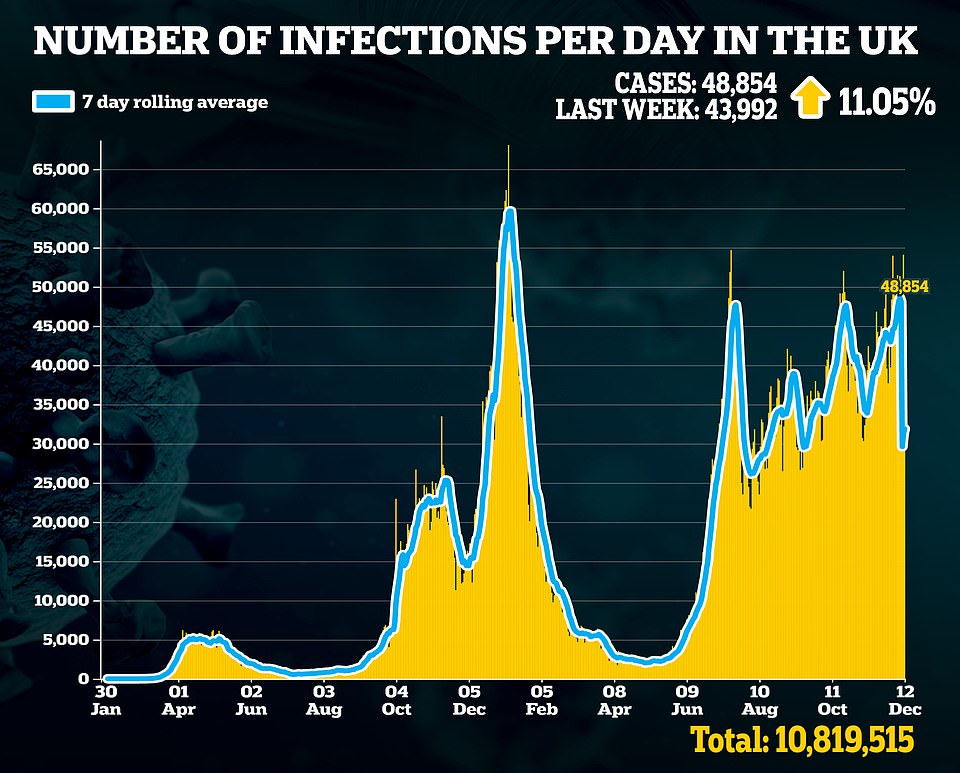 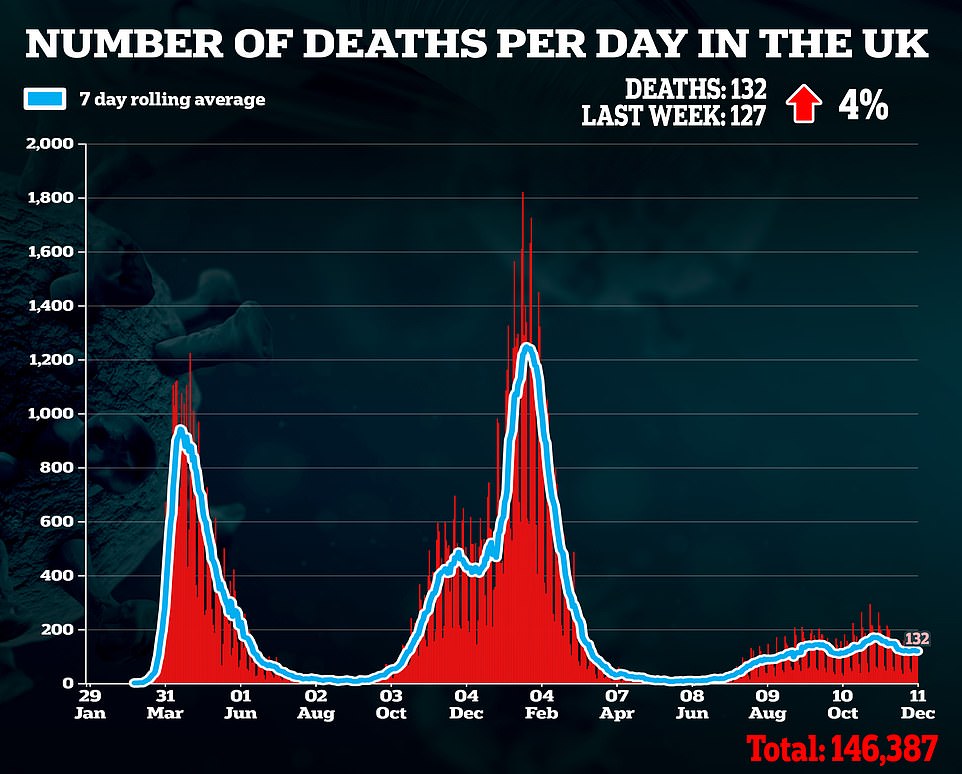 Meanwhile, the UK Covid alert level was raised to Level 4, up from Level 3, following a rapid increase in the number of Omicron cases being recorded.

The recommendation was made to ministers by the country’s four chief medical officers and NHS England’s national medical director following advice from the UK Health Security Agency (UKHSA).

The UK, as of Sunday, recorded a further 1,239 confirmed cases of the Omicron mutation, bringing the total number of cases to 3,137 – a 65 per cent increase from Saturday’s total of 1,898.

Education Secretary Nadhim Zahawi said the actual number was likely to be 10 times as high.