Ruth Davidson today accused Nicola Sturgeon of attempting a ‘cover-up’ after new evidence emerged of warnings it could look ‘shifty’ if information continued to be withheld during Alex Salmond’s legal challenge.

The Scottish Tory leader asked Ms Sturgeon at First Minister’s Questions today about an email exchange in which the Government was told not disclosing ultimately-damning evidence of prior contact could be ‘portrayed as a failed attempt at a cover-up’.

According to the note released this week by the Government, external counsel argued it would be ‘better, more credible and less shifty-looking’ to adjust its defence against Mr Salmond’s legal challenge over the Government’s handling of sexual harassment complaints made against him.

It came as Tory MP David Davis used Westminster privilege to reveal explosive messages which suggest Ms Sturgeon’s chief of staff, Liz Lloyd, was ‘interfering’ in the complaints process over the Salmond case. 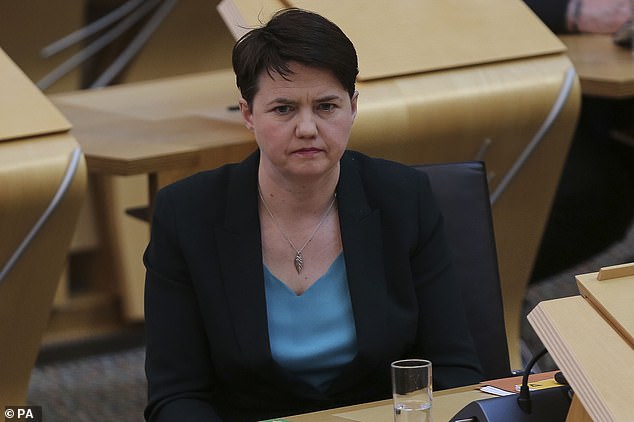 The note discussed in the Scottish Parliament today was sent by a Government official – whose name is redacted – to Permanent Secretary Leslie Evans and the Government’s legal director Paul Cackette, following a meeting between the external counsel, Ms Sturgeon and Ms Evans.

The Government says no notes or minutes can be found from the meeting, but the correspondence indicates counsel advised adjusting the judicial review pleadings after evidence came to light of prior contact between the investigating officer and two of the women whose complaints about Mr Salmond had been investigated.

Recounting the substance of the meeting, the note states that counsel ‘felt it better, more credible and less shifty-looking if we proceed as proposed’.

It continues: ‘That was on the basis it will probably all end up being out there anyway (since a specification of documents is likely) and better to face it transparently than having this dragged out reluctantly and portrayed as a failed attempt at a cover-up.’

Ms Davidson said the correspondence had been ‘sneaked out’ just days before the parliamentary inquiry into the Government’s unlawful investigation is due to report its findings.

She asked Ms Sturgeon: ‘Why did the Government go ahead with the attempt of the cover-up anyway?’

The First Minister replied: ‘What she has just quoted, what that actually means is counsel saying to Government: ”Here are things we should hand over and we should hand them over – I think actually it was amend pleadings, although I’ll be corrected if I’m wrong on that – rather than have any suggestion that we’re trying to cover it up’.’

‘So what did we do? We amended the pleadings.

‘All of this is out there for people to see, because people don’t have to take Ruth Davidson’s word for these things anymore.

‘They don’t have to take the word of the old boys’ club in the House of Commons anymore.’ 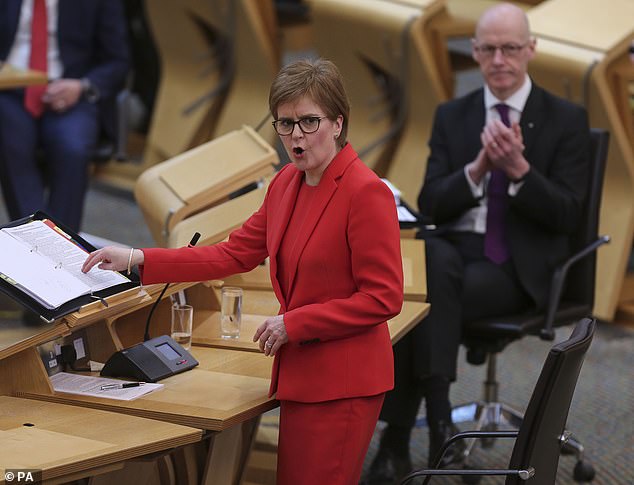 Ms Davidson, the leader of the Scottish Tories at Holyrood, told Ms Sturgeon (pictured) that the correspondence had been ‘sneaked out’ just days before the parliamentary inquiry into the Government’s unlawful investigation is due to report its findings

Ms Davidson responded: ‘The evidence does mount up as to the Government excuses, but nothing can excuse the way that the women at the heart of this were failed, nor the taxpayers’ money that was wasted.

‘And the one thing that’s not happened is anyone in this Government taking the responsibility that they should.

The First Minister also addressed allegations made in the Commons by David Davis MP, who used parliamentary privilege to read out leaked correspondence, including a message from the investigating officer that complained of ‘interference’ by Ms Lloyd.

Ms Sturgeon claimed Mr Davis was ‘reading out his old pal Alex Salmond’s conspiracy theories’, and said: ‘Holding this Government to account is vital, but anyone who chooses to cheer that on should not pretend to have the interests of the women concerned at heart.’ 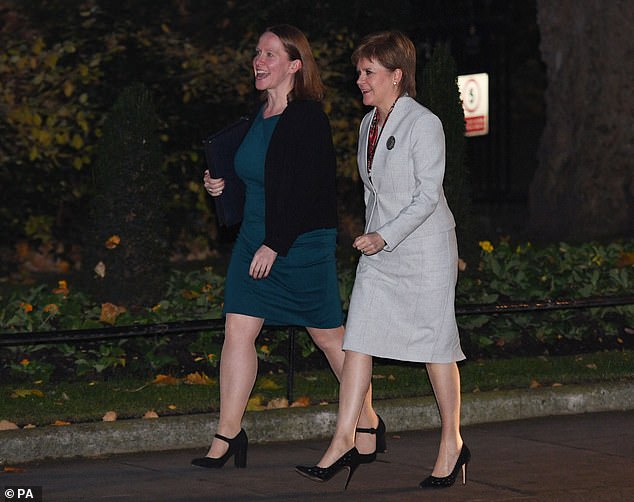 All the text below is taken directly from David Davis’ speech in Parliament.

On September 28, 2018, a month after the police started their investigation of the criminal case, McCann expressed great disappointment to Ruddick that someone who had promised to deliver five complainants to him by the end of the week had come empty or ‘overreached’ as he put it. One of the complainants said to Ruddick she was ‘feeling pressurised by the whole thing rather than supported’.

Defendant’s ‘sickened enough to get back in the game’

In the day following the Scottish Government’s collapse in the judicial review in January 2019, Ruddick expressed to McCann the hope that one of the complainants would be ‘sickened enough to get back in the game’. Later that month, she confirmed to Murrell that the complainant was now ‘up for the fight’ and ‘keen to see him go to jail’. Ruddick herself in one of her texts expressed nervousness about ‘what happens when my name comes out as fishing for others to come forward’.

The text messages reveal that at an SNP National Executive Committee meeting early in January 2019 the Hon Member for Edinburgh South West raised concerns amongst staff at Westminster that SNP headquarters were engaged in the ‘suborning’ of witnesses, whilst on the 28th August 2018 a senior member of SNP staff in this building described in an email the SNP headquarters move against Salmond as a ‘witch hunt.’

Shortly after charges were brought against Salmond, Peter Murrell sent messages saying it was a good time to be ‘pressurising’ the detectives working on the case, and that ‘the more fronts [Salmond] is having to firefight on the better for all complainants’. When the Inquiry put these messages to Mr Murrell, he said that they were ‘quite out of character’.

Miss Sturgeon has denied Mr Salmond’s accusations of an orchestrated plot to bring him down as ‘absurd’.

The First Minister is facing accusations she broke the ministerial code by misleading Parliament over when she found out about sexual harassment claims against her predecessor, Mr Salmond.

She had told MSPs she first learnt of complaints on April 2, before later admitting to ‘forgetting’ a meeting about sexual harassment claims with Mr Salmond’s former chief of staff, Geoff Aberdein, on March 29.

But in an astonishing intervention in the House of Commons, the former Brexit secretary said he has it ‘on good authority’ there is an exchange of messages from February 6, 2018, between Judith Mackinnon, who carried out the investigation into the complaints about Mr Salmond, and senior government official Barbara Allison ‘suggesting that the First Minister’s chief of staff is interfering in the complaints process against Alex Salmond’.

He said the investigating officer said in one message that ‘this interference v bad’.

Mr Davis said: ‘If true, this suggests the chief of staff had knowledge of the Salmond case in February, not in April, as she has claimed on oath.

‘The First Minister also tied herself in [to] that April date in both parliamentary and legal statements. She was of course aware earlier than that. The question is, just how aware and how much earlier?’

Mr Davis said he was passed papers from an anonymous whistleblower, including a download of text messages from Sue Ruddick, chief operating officer of the SNP, which is held by police.

He said the whistleblower told him the messages ‘point to collusion, perjury, up to criminal conspiracy’.

Mr Davis referred to one message from September 28, 2018, a month after police started their investigation, in which SNP compliance officer Ian McCann expressed disappointment to Miss Ruddick that someone who had ‘promised to deliver five complainants… by the end of that week had come up empty, or overreached as he put it’.

Referring to another message on the day after the Scottish Government’s judicial review case collapsed in January 2019, he said Miss Ruddick expressed to Mr McCann the hope one of the complainants ‘would be sickened enough to get back in the game again’.

He said Miss Ruddick was nervous about her name coming out as someone ‘fishing’ for people to come forward.

Mr Davis also referred to Mr Murrell’s messages saying it was a good time to be ‘pressurising’ police. He said Mr Murrell told the inquiry these messages ‘were ‘quite out of character’. That is no defence even were it true’.

A spokesman for the First Minister said: ‘Every message involving SNP staff has been seen by the committee previously. Their views have been widely reported as dismissive of them.’

Scottish Conservative leader Douglas Ross said last night: ‘If the First Minister’s side were aware of complaints against Alex Salmond in February 2018, an outrageous breach of those women’s privacy and confidentiality has occurred 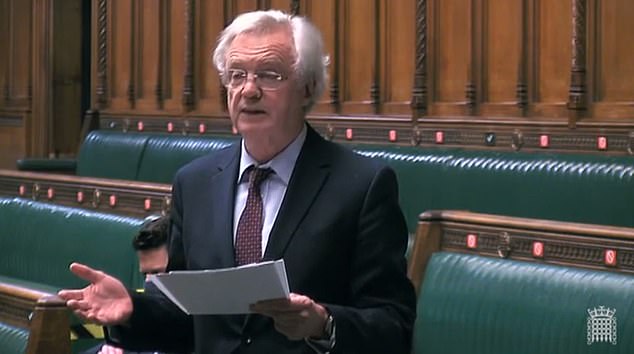