SOME kids in Scotland will return to school next week – but the lockdown may be extended for weeks to come, Nicola Sturgeon said today.

The Scottish First Minister confirmed plans to get more kids back into the classrooms in the coming days, but stopped short of revealing a full plan for easing the nationwide lockdown. 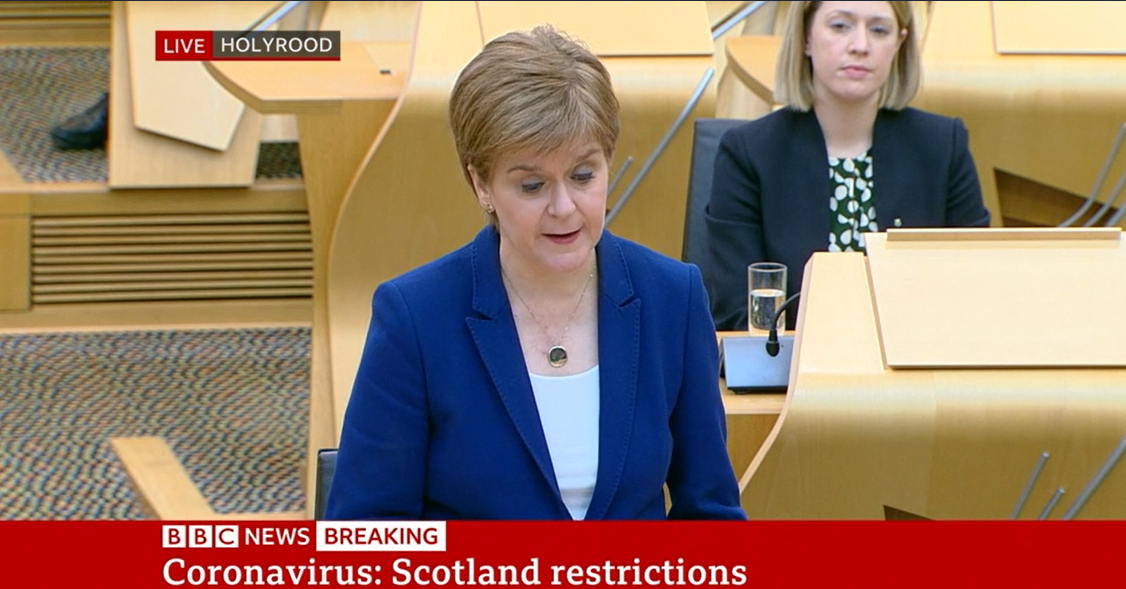 But she said that 100 per cent normal wouldn't be possible yet as the pandemic continues – and that even a slight easing of restrictions could see cases soar again.

There would be "trade offs" involved in getting kids back in school – meaning Scots will be "living with some other restrictions for longer" and would have to "shoulder some responsibility" so the infection rate doesn't skyrocket.

She told MSPs in the Scottish Parliament this afternoon: "That is a trade-off we need to be willing to make.

"I [can] confirm that the phased and gradual return to school that I said we were hopeful about when I updated Parliament two weeks ago will go ahead as planned from Monday.

"Children's education and wellbeing is such an over-riding priority."

Pre-school kids and a limited number of older kids will be able to return from Monday, 22 February – two weeks before they start in England.

More vulnerable children are allowed to return too, if the schools believe it would be helpful for them.

Other kids won't go back until at least the 15 March.

She added: "I know this is difficult given how desperate we are to get back to something close to normal, but if we open up too quickly to meet arbitrary dates, we risk setting progress back."

Anyone returning will have access to lateral flow rapid results tests to help kids get back in classrooms.

Schools in England won't be returning until at least March 8, Boris Johnson has said – and has vowed to give parents at least two weeks notice.

The First Minister said that lockdown rules including the stay at home message would continue until the beginning of March – and possibly even beyond that.

Her Scottish Government is currently preparing fresh plans for a lifting lockdown plan – like the UK Government.

And they hope to publish it next Tuesday, after the PM's roadmap.

She promised: "We need to balance all the different factors and plan a gradual, phased return to as much normality as possible. That is what the government is now very much focused on doing."

Ms Sturgeon was incredibly pessimistic about the chances of a holiday this year, saying: "restrictions on our ability to travel overseas is likely to be inescapable" for the time being.

An Easter break was very unlikely as hotels won't be open by then, but a summer staycation within the country may be possible.

She won't be able to say whether that will be possible for weeks to come.

The First Minister said added: "We are likely to advise against booking Easter holidays, either overseas or within Scotland, as it is highly unlikely that we will have been able to fully open hotels or self-catering accommodation by then.

"However, for the summer, while it is still highly unlikely that overseas holidays will be possible or advisable, staycations might be – but this will depend on the data nearer the time."

The news will be a hammer blow to the hospitality industry, as it means they won't be able to reopen before the start of April.

The PM is hoping to open pubs before Easter, which may have included the hospitality sector too.