The Business Council of Australia is demanding an end to Melbourne’s stage four in less than two weeks with shops, factories and warehouses to open their doors again on September 14.

But Premier Daniel Andrews, who reported 113 new coronavirus cases in Victoria on Thursday with 15 more lives lost, will not rule out the continuation of current restrictions when the six-week lockdown runs out on September 13. 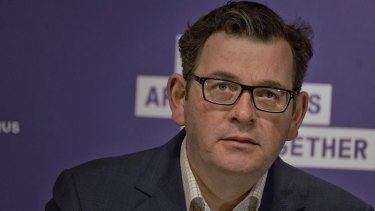 Premier Daniel Andrews says the plan for easing restrictions has not been finalised.Credit:Luis Enrique Ascui

The Premier downplayed a leaked Health Department document flagging a further two weeks of lockdowns, night curfew and travel restrictions, saying it was a "draft" with "no status".

"Everything is on the table," Mr Andrews said, insisting that the road map out of Melbourne’s toughest ever restrictions had still not been drawn up and that the plan for opening up the city and the state, to be announced on Sunday, was still to be finalised.

But the Business Council’s advice to the Labor government is clear cut, that the state and its economy should be opened up quickly, with businesses or neighbourhoods identified as COVID-19 hotspots managed through a system of "blacklisting".

The council says the current restrictions on food distribution businesses could start to affect supplies as demand increases in the run-up to Christmas, and the interstate supply operations could no longer prop up Victoria’s system.

A Roy Morgan poll of 1000 Melburnians published on Thursday showed respondents evenly split on the question of easing the lockdown to allow residents to visit family members.

The research company reported that support is still strong for key aspects of the government’s present COVID-19 response with most of those surveyed still in favour of the night-time curfew, the five-kilometre travel limit and 87 per cent of respondents supporting the mandatory face mask policy.

The government also moved to extend its ban on residential evictions, which had been due to expire at the end of December, until the end of March 2021, with legislation introduced into State Parliament on Thursday to extend the moratorium.

The leaked draft reopening plan floated for the first time the prospect of social “bubbles” between two households, meaning Victorians would only see a select group of friends and family for several more weeks.

The plan also lists for the first time criteria for moving into new stages based on daily case numbers, suggesting stage two would only be activated once average daily case numbers were consistently below five.

But Victoria would have to effectively eliminate community transmission of the virus – recording no new cases for 14 days – before the state could move to stage one restrictions, according to the plan outlined in the document.

In Melbourne, a “bubble” concept could be introduced in stage three for single parents or those living alone, who would limit their close contacts by nominating one permitted visitor to their home.

The draft also advocates a “go outside” message, used effectively in Scotland and New York, that discourage gatherings in private homes where there is a “up to a 20-fold greater risk of virus transmission”.

Mr Andrews said the draft document, which had not been to state cabinet nor presented to the Premier, was out of date but did say during his daily media briefing on Thursday that the opening up process, which might take several months, would be cautious and driven by the medical advice.

“We’ve got to do this in a safe and steady way, that’s what the science tells us, that’s what the doctors tell us and as difficult as that is to hear, there is no alternative,” The Premier said.

But the Business Council wants a clear timetable for an early opening-up of the economy and for the state to adopt a default position that a business should be open unless it was a proven danger to public health.

“As a priority, the curfew and the 5km travel restrictions should be removed on 14 September. This could be replaced with a strong encouragement to shop local,” the council’s feedback to the state government reads.

“There must be no backsliding. Stage 4 restrictions must not be returned to. From 14 September the overriding principle must be that no business or region should take a step backwards from where they are now unless specifically identified as a hot spot.”

Our weekly newsletter will deliver expert analysis of the race to the White House from our US correspondent Matthew Knott. Coming soon. Sign up now for the Herald‘s newsletter here, The Age‘s here, Brisbane Times‘ here and WAtoday‘s here.