Home » World News » No loans at this library, but playing helps keep the synthesisers alive

Hiding in a North Melbourne back alley, a unique library offers budding musicians access to a living history of electronic instruments.

Melbourne Electronic Sound Studio, or MESS, houses more than 200 synthesisers, with a further 500 stored elsewhere. The collection is constantly refreshed and growing. 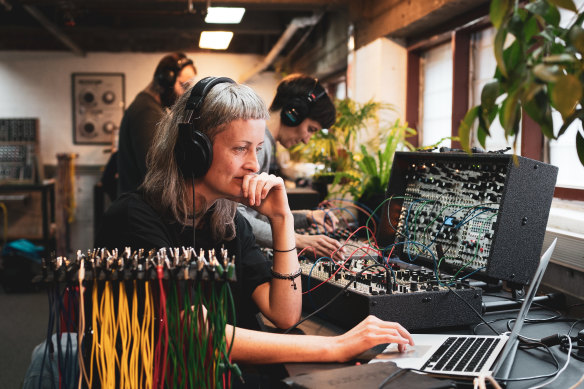 “It’s terrifying how much water is around this space,” says former studio manager Mat Watson of the fire sprinklers in the ceiling and taps in the basement. “There’s probably around $2 million worth of other people’s gear here. It causes a lot of stress.”

Formed in 2016, MESS is the brainchild of Byron Scullin and Robin Fox, a pair of high-end synth enthusiasts.

“Traditionally, those instruments were out of the hands of ordinary people,” says Watson. “They were either behind closed doors at institutions [or] sound research workshops, or [owned by] wealthy rock stars.”

MESS was conceived to change that. “You could walk up the laneway, knock on the door and say, ‘I heard about MESS’ or, ‘I saw the sign’, and within a few minutes you can have your hands on this history of electronic music instruments.”

MESS’s collection reflects the history of electronic music, from the Yamaha CS-80 that was used for themes to Doctor Who and Chariots of Fire, to Brian Eno’s EMS Synthi and Elton John’s favourite Yamaha DX. There is also a reissue of the legendary Australian-made Fairlight, the sound behind Kate Bush’s recently revived Running up that Hill.

Collectors who have donated synthesisers to the not-for-profit library include Melbourne musician Wally De Backer (aka Gotye) and Tony Osmond, the head of Citibank. Both have been passionate about MESS since its inception.

“I get so much satisfaction out of people coming in and bringing their laptops and their headphones in and then me listening to what they’ve created. That’s really why I do it,” says Osmond, also chair of the MESS board.

For collectors, loaning machines to MESS has the added advantage of preserving them. 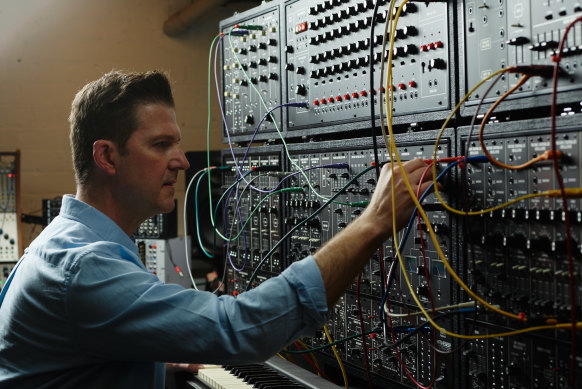 “If you’ve got a synth from 1969 and you put it behind glass, then it’s going to die over time,” Watson says. “If you have that available to the public, and it gets used a couple of times of month, then it’s not going to die.”

Fox likens it to car maintenance. “When they’re not used, all of these components suffer physical degradation. Of course this doesn’t preserve the machine in its original condition, but much like the car – with ongoing use and maintenance it has a much longer life.” 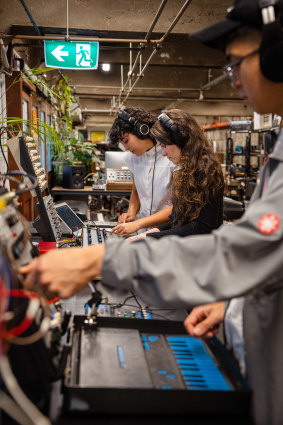 The MESS collection demonstrates the changes electronic music has undergone. The first-ever synthesiser weighed 200 tonnes. Models in the MESS library range from the desk-sized Buchler to the laptop-sized Synthi. Electronic music is now usually made on a computer, but MESS devotees enjoy the randomness of the analogue machines.

For Watson, a Buchler input named “The source of uncertainty” represents this perfectly.

Some notable musicians have visited MESS over the years, including Kyle Dixon and Michael Stein, the creators of the Stranger Things theme tune; rapper and producer Flying Lotus; and members of the bands Nine Inch Nails and Stereolab.

MESS works on a subscription model but has recently introduced day passes to encourage spur-of-the-moment participation.

It operates, as Watson describes it, “somewhere between a museum and a gym … the equipment doesn’t leave MESS. So, you’re here to work in the space and take that knowledge away and take your recordings away and do whatever you want with them.”

For those who need a little guidance with the machines, there is a range of workshops. Live performance is another MESS activity. In a particularly epic example, Watson and 15 other MESS community members performed a piece at the Sidney Myer Music bowl.

“It’s been said that possibly that’s the first time that that collection of instruments has ever been seen on stage together,” he says.

One of the biggest costs to the organisation is insurance and 2024 will bring the challenge of finding a new, less watery space.

“My greatest fear, to be honest, is that they just get damaged, you know, (ceiling) sprinklers go off. That would be just awful,” Osmond says.

“So the next project for us is to try and find a slightly bigger facility so that we can expand the workshops, expand the number of people that can come in. That’s definitely a priority for us for the next few years.”

Ontario woman convicted in Stefanie Rengel murder not committed to rehabilitation: parole board