Union boss John Setka has launched a furious attack on his rivals ahead of a landmark vote next week on whether the CFMMEU will split under new federal government laws.

As well as taking aim at his opponents within the Construction, Forestry, Maritime, Mining and Energy Union, the secretary of the union’s construction and general division in Victoria has hit out at the Morrison government, Labor’s federal leadership and the ACTU. 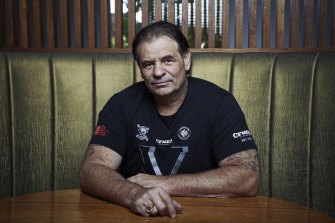 John Setka is one of the first guest to appear on the Melbourne Calling podcast hosted by City of Yarra councillor Stephen Jolly. Credit:Benny Capp

But in a wide-ranging interview to be broadcast online this week, Mr Setka talked up his record as a unifier within the union and his dedication to the rights of members, while maintaining he was a champion for the growing number of women in the construction industry.

Mr Setka said he frequently told male construction workers to imagine how they would feel if their wife, mother, daughter or niece was treated poorly on a worksite.

“[Women] are equals, you’ve got to treat them as equals because they are our equals, they’re human beings, they’re [union] members. I mean, just because they’re females doesn’t mean they’re inferior or anything.”

Mr Setka has for the past year fought to maintain control within the powerful union amid allegations of misogyny, court hearings, his resignation under pressure from the Australian Labor Party and condemnation by the leader of the ACTU.

He is also resisting moves by the mining division to split from the CFMMEU, with division members meeting on Monday to vote on a proposal to leave the massive union after months of bad blood, power plays and infighting.

Mr Setka was one of the first guests on new series Melbourne Calling, a podcast featuring prominent Melburnians hosted by Socialist councillor for Yarra Stephen Jolly. Mr Jolly works as a shop steward for the CFMMEU.

During the interview, Mr Setka took aim at ACTU boss Sally McManus and federal Labor leader Anthony Albanese, both of whom called for his removal from the union after his conviction for harassing his wife in 2019 and comments about anti-violence campaigner Rosie Batty.

Mr Setka was originally charged with more than 30 offences – including assault – but that was reduced to two offences of breaching court orders and harassing his wife, Emma Walters, after he agreed to plead guilty. Both he and Ms Walters maintained there had been no violence in the family home.

“I could live for 100 years and if I never spoke to Sally McManus any more, or Albo – I never liked Albo and I’ve never spoken to him anyway – it’d be no skin off my nose,” Mr Setka said.

While Mr Setka finally quit the ALP, Ms McManus was ultimately unsuccessful in persuading him to leave his position as union boss.

Instead, two of his foes – national president Tony Maher and national secretary Michael O’Connor – quit their positions within the union.

In November, Mr O’Connor resigned after warning the union had become “totally dysfunctional”.

“The organisation has now failed the test of political maturity with people unwilling to work together, listen to each other or compromise for the sake of the organisation and the members’ interests,” he said.

“We have held this organisation together through some tough times but unfortunately the differences are irreconcilable.”

The CFMMEU moved a motion of no confidence against Mr O’Connor months before his resignation, and Mr Setka accused Mr O’Connor and Mr Maher of acting against the interests of union members.

Mr Maher, who also resigned in November as national president, wrote in a letter to members that “solidarity has been replaced by self-interest” in the union.

“The construction division has made it clear that they will use their numbers to steamroll smaller divisions, force decisions in their favour and run the CFMMEU as a construction union,” he wrote.

“This is an unacceptable situation.”

The growing war within the CFMMEU escalated as the federal government unveiled industrial relations reforms, including a bill – supported by Labor – that will allow unions to demerge.

Mr Setka told Mr Jolly that his relationships with Labor and his union opponents had deteriorated in this context.

“I just thought it was a pretty piss-poor attitude, but that’s what you get from ALP hacks,” Mr Setka said.

“Part of it is sour grapes.

“I mean, Michael O’Connor. He was the national secretary to the union until there was a vote of no confidence taken in him.

“There’s a lot of union leaders that are more interested in the ALP than they are in their members.

“And I hate that. I’ve always despised that. I think the people that pay your wages … we’re beholden to them, they pay our wages. The ALP don’t pay my wages. So that’s why I’m not beholden to them.”

Mr O’Connor is the brother of Labor frontbencher Brendan O’Connor.

Why the Women in My Family Don’t Scrub Floors