An Australian man has recounted the horror of having to crawl to escape a “slow and agonising crush” during Halloween festivities in South Korea that killed his friend and more than 150 other people.

Nathan Taverniti, from Sydney, said he and three female friends were at the front of the 100,000-strong crowd who had massed in Itaewon, Seoul, on Saturday night when waves of people suddenly started “coming in from both sides”.

Taverniti said he lost sight of friends only to crawl free from the crowd and later discover two were in hospital and the third had died. 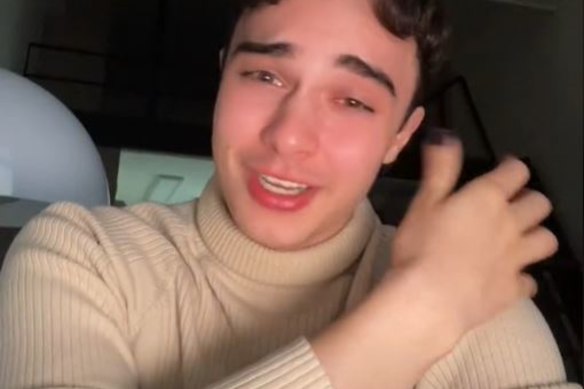 Australian man Nathan Taverniti said he was in the crowd when the “agonising” crush began in an emotional video posted to social media platform TikTok.Credit:TikTok

A Department of Foreign Affairs and Trade spokesman said on Sunday night that the Australian embassy in the South Korean capital of Seoul had been notified of the death of an Australian in the “tragic” incident.

“It was my friend’s 24th birthday in 12 days, I was there when she said she couldn’t breathe, I grabbed one of my friend’s hands,” Taverniti said in a video posted to his TikTok after he had spent “hours and hours” searching for his dead friend’s body.

“There was no stampede. It was a slow and agonising crush. This crush was not caused by drunk people. It was lack of planning, police force and emergency services. Nobody was willing to help.

“I watched as people filmed and sang and laughed while my friends were dying along with many other people.”

Taverniti said he believed the tragedy could have been avoided if proper planning had been in place, adding that organisers and police knew the event was going to attract a large crowd.

He said he watched as bystanders performed CPR on those lying unresponsive on the ground while waiting for emergency crews to arrive.

“I am devastated by the situation which could have so easily been avoided,” he said.

Most of the 153 killed on Saturday night were in their 20s or 30s with more than 100 others injured, including 24 who were in a critical condition.

Ninety-seven of the fatalities were women and South Korean media reported up to 26 of the dead were foreign nationals, including from the US, Iran, China, Norway, Thailand and Uzbekistan.

Many of the giant crowd were dressed in costume as they converged on Itaewon, a vibrant area of bars and restaurants to celebrate Halloween and let their hair down after the recent easing of COVID-19 restrictions.

Just a few hours later, however, the festivities took a tragic turn as partygoers collapsed and were trampled on in a crowded alleyway near an exit to the subway station.

Witnesses said the crowd surge caused “a hell-like” chaos as people fell on each other “like dominoes”.

Some people were bleeding from their noses and mouths while being given CPR, witnesses said, while others clad in Halloween costumes continued to sing and dance nearby, possibly without knowing the severity of the situation.

Witnesses said the streets were so densely clogged with people and slow-moving vehicles that it was practically impossible for emergency workers and ambulances to reach the alley swiftly.

'Little to no change' in North Korean capabilities: US commander