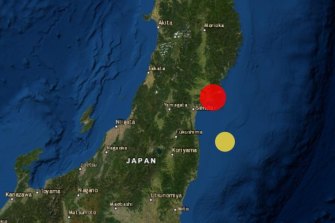 The location of an earthquake that struck Japan on Saturday.

The quake hit Miyagi prefecture on Saturday evening local time and had a preliminary magnitude of 7.2, NHK said.

The US Geological Survey also put the strength at magnitude 7.2 and local news outlets reported shaking was felt in Tokyo.

The USGS said the quake was centred 27 kilometres east of Ishinomaki.

Officials said there were no immediate reports of damage.

Australia’s Bureau of Meteorology said on Saturday night there was no tsunami threat to Australia.

Loophole in lockdown of COVID-19 ‘hot zones’ may put others as risk: NYC teachers