One of Melbourne’s most violent gangland figures Gavin “Capable” Preston is set to be released from prison, with the notorious standover man about to be granted parole.

The looming return of Preston, who is suspected of shooting bikie Toby Mitchell and plotting to kill Mick Gatto, has put law enforcement and the underworld on high alert after his arrest took him off the streets following a bloody crime spree nearly a decade ago. 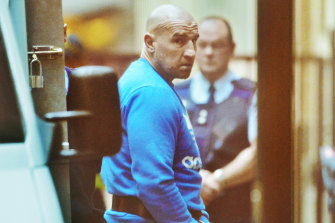 The 49-year-old is being released nearly 20 months early after being sentenced to 11-years in jail for “defensive homicide” over the death of drug trafficker Adam Khoury and the wounding of another dealer in separate shootings in 2012.

Preston, who sources say earnt the nickname “Capable” because he is “capable of anything”, has a lengthy list of violence, armed robbery and weapons offences dating back to when he was 18. He also has the word “Capable” tattooed on his stomach.

The last time he was released from prison, in 2007, Preston attempted to start a new life “like one of the people on the tram” but fell back in with old criminal associates and began a series of confrontations with real and perceived enemies.

Preston was one of the prime suspects, along with Nabil Maghnie, in the near fatal shooting of former Bandidos-now-Mongols bikie Toby Mitchell outside the Doherty’s Gym in Brunswick in 2011.

In late 2011, Maghnie and Preston were intercepted by police with a loaded gun ahead of an alleged plan to murder Mick Gatto for reasons that remain unclear. The charges were later dropped.

But it was Preston’s escalating feud with armed robber and standover man Christopher “Badness” Binse that led to his most recent stint in jail.

During his 2015 trial, Preston told the court he went to Adam Khoury’s North Melbourne flat in a bid to negotiate a truce between himself and Binse, who he believed was trying to plant a bomb under his car.

Preston was unarmed and when a struggle ensued, he claims he shot Khoury in self-defence with the drug trafficker’s own gun.

Preston had been under police surveillance at the time but the officers were pulled off the watch just half an hour before the shooting.

While awaiting trial, his time in Barwon Prison was marred by another brutal feud with former friend Matthew Johnson, head of the jail gang the Prisoners of War.

In 2014, five prisoners armed with knives, metal bars and spikes stabbed Preston more than 20 times. He refused to provide a statement against his assailants. Video of the assault would later be published on YouTube by people purporting to represent Prisoners of War.

The Adult Parole Board will sometimes release potentially dangerous offenders before they complete their full sentences because it allows them to attach strict monitoring and reporting conditions, rather than allow them to walk out of jail a “free man”.

Victoria Police said they acknowledged the parole decision but declined to comment.

“Albeit with significant reservation, I accept that there are some prospects for your rehabilitation,” Justice Cameron Macaulay said at Preston’s sentencing in 2015.