NSW recorded 98 new locally acquired cases of COVID-19 in the 24 hours to 8pm, with two-thirds of those reported in south west Sydney.

NSW Premier Gladys Berejiklian told reporters on Monday that 20 people were infectious in the community for more than one day, which was still too high to end the lockdown. 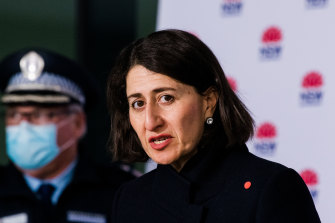 “We just need families to stay in their family home and not move household to household,” Ms Berejiklian said.

Workplaces were the second highest place of exposure.

There are 82 cases in hospital, including 24 people in intensive care and seven people receiving ventilation.

As Sydney entered its fourth week of lockdown, construction sites were silent for the first time and police ramped up their presence on the beaches, with more officers deployed to ensure that exercisers were complying with social distancing regulations.

Two new vaccination hubs opened at Lake Macquarie and on Pitt Street, where 20 people are receiving their vaccinations every 15 minutes and bookings are already full until mid-August.

Across the state, about 75,845 tests were performed over the 24 hours.

Queensland, which recorded no new local cases, resisted pressure to close the NSW border, with authorities telling reporters on Monday morning they were not satisfied that cases were spreading beyond greater Sydney to justify the impost on border towns. Two people who tested positive after staying at a Tweed shire truck stop did not appear to have transmitted the virus during their stay as there had not been any positive sewerage tests.

NSW Health revealed new exposure premises last night, including several shops in Fairfield, a medical centre in Pendle Hill, a restaurant in Lakemba and a Shell Coles Express at South Bowenfels, near Lithgow, which have been marked as close contact sites.

Anybody who travelled on the 888-2 bus route from Market Fair to Campbelltown Station between 5.23pm and 5.27pm on Monday July 12 is also identified as a close contact. Casual exposure sites include numerous shops in Fairfield, Fairfield Heights, Green Valley, Parramatta, Liverpool, Wetherill Park, Homebush West, Carnes Hill and the T8 train line between Macarthur/Campbelltown and Glenfield.