A cross sits on top of a church in Berlin, Germany. Pope Francis’ high-stakes sex abuse prevention summit is meant to call attention to the crisis as a global problem that requires a global response. (AP Photo/Markus Schreiber, File)

It wasn’t until Rev. Cait Finnegan gave birth to a baby girl more than three decades ago that the full trauma of all she had withstood was fully unleashed.

“It was my protective instinct, I just didn’t want my daughter to be alone. I stayed with her from the day she was born,” Finnegan, 67, a Catholic school student in 1960s New York and once an aspiring nun, told Fox News. “Because I had been abused in many places to many degrees. This was every day in school, weekends, she would come to my home.”

Starting at just 15, Finnegan alleged that she was repeatedly raped by a Catholic nun and for years, after finally escaping, lived a life on the edge of falling apart. She said she spent much of her life trapped in a state of rage, depression, and agoraphobia, unable to leave the house or be away from her daughter, now 36.

They lived in poverty as Finnegan said she was only able to take on odd jobs at night, as her marriage strained under the emotional weight.

“When my daughter was 12, we thought it would be good to register her at a Catholic School,” Finnegan recalled. “But then the nun opened the door, I had a flashback, I grabbed her and ran.”

Finnegan said her abuser died more than four years ago. But the deep, dark memories she has carried since adolescence remain.

“The pain is still there, still haunting,” Finnegan, who was married to a Catholic Priest but is now widowed and has dedicated her days to supporting other survivors and serving as the minister of the Pennsylvania Celtic Christian Church, continued. “But I am never going to shut up, I am going to do everything I can to help heal some of the sad memories my daughter had to endure because of this.” 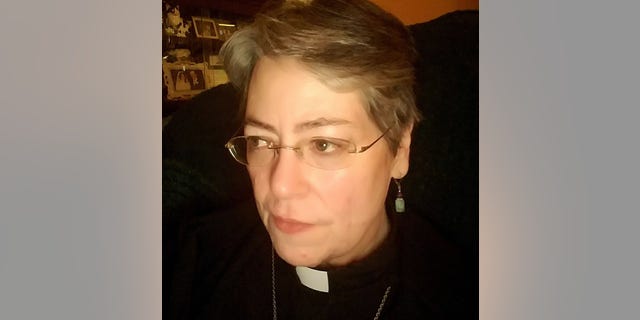 But she is hardly alone in what some experts predict might be the next big blow for the Church to grapple.

Last month, a Minnesota-based law firm that represents survivors of clerical abuse unveiled a long list of those who have been credibly accused of child molestation. The 185-page “Anderson Report on Child Sexual Abuse in the Archdiocese and Dioceses,” which focused on Illinois and mostly on priests, also named six nuns among the 390 alleged abusers.

Of the six nuns named, three are reported to now be dead and the whereabouts of the remaining three is not clear, the report stated.

Some of the appalling claims date back half a century, but it’s an issue that investigators believe is very much prevalent today and shrouded in the secrecy of survivors.

Patrick J Wall, a former Roman Catholic Priest and Benedictine Monk who is now an expert in canon law and clergy sexual exploitation, rallying on behalf of other survivors at the Anderson firm, said that almost all cases involving nuns as perpetrators have been wiped from the vaults.

“The cases I remember, the nun was moved, or a couple of times sent off for treatment,” he said. “There is no public record, just quietly settled. Most states have no record of the cases being settled.”

Wall said that such cases he came across during his tenure in the Church were all quietly settled and that many accusations since have had “statute of limitation problems.” He also said there is next to no data specifically looking at the issue of sexual abuse by nuns, and there may not be any officially compiled anytime soon.

“The Church has such a gigantic problem with the Bishops now,” Wall conjectured. “They likely are not concerned about the nuns.”

And Mary Dispenza, a director at the St. Louis-based Survivors Network of Those Abused by Priests (SNAP), a support group for anyone harmed by institutional and religious authorities, told Fox News that it wasn’t until recently – the age of 78 – she too acknowledged that she was a victim of nun sexual abuse throughout her 15-year tenure.

“It was an awakening for me, a story I carried around for so long, one of such confusion,” said the former Southern California-based nun turned survivor advocate. 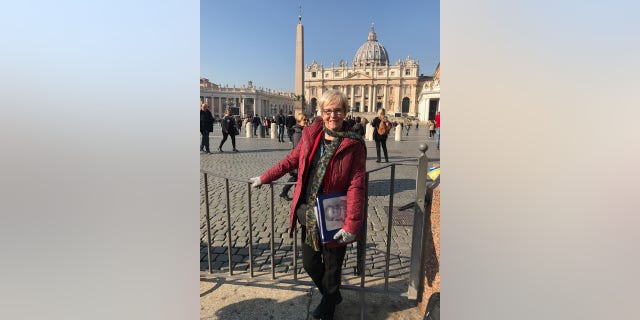 Mary Dispenza, representing SNAP at the Pope’s summit on The sexual abuse of minors earlier this year.
(Mary Dispenza)

Since federal authorities opened a probe into allegations of abuse at several dioceses in Pennsylvania last October, Dispenza noted that 67 individuals from across the United States have reached out to her with their own horror stories of misconduct – 56 of them documented sexual abuse by nuns, four claimed physical and emotional abuse, two were concerned nuns themselves seeking information on how to improve their orders, and the remaining endured priest abuse.

“This number could be multiplied several times over, a few thousand around the world,” she cautioned. “It is another significant problem the church is yet to face.”

While the majority of those who reached out to Dispenza for guidance were female, she said some were male recounting their childhood horrors.

“The men carry a great deal of shame, which has kept them from coming forward or speaking out,” she observed.

The Holy See has been forced to deal with a dizzying fall from grace over the past year as massive numbers of priests around the world have been exposed as sexual abusers and predators. Pope Francis has also had to acknowledge that some nuns were also abused by clergymen.

But no word has been uttered publicly.

In February, church leaders worldwide convened in Rome for a four-day conference to address the amplifying abuse scandal, and carve a structured, more transparent way forward to aid survivors and resolve the profound stains on the Church’s image.

“No one wants to touch the nuns,” she contended. “The nuns have been sacred and by and large, they are mostly wonderful and dedicated women who have nurtured and cared for children throughout the years. But this is a current issue that has not yet been addressed.” 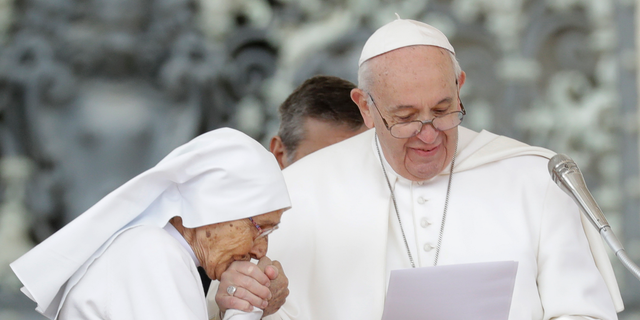 85-year-old sister Maria Concetta Esu kisses the hand of Pope Francis as he presents her with a Pro Ecclesia et Pontifice award during his weekly general audience, in St. Peter’s Square, at the Vatican, Wednesday, March 27, 2019. 85-year-old sister Maria Concetta Esu is an obstetrician who gave birth to some 3,000 children during her 60 years of missions in Africa, that the pontiff met during his trip to the Central African Republic. (AP Photo/Andrew Medichini)

The Vatican did not immediately respond to a request for comment.

While mostly a silent crime through the passage of time, small spouts of justice have been brought to the surface from time to time.

In 2004, a former nun accused of molesting a 10-year-old Catholic school student 15 years earlier was convicted in a Virginia Beach court of two felony sex crimes and was sentenced to a 10-year suspended sentence.

A year earlier, for the first time locally, a nun was identified as an alleged abuser amid a wave of allegations leveled against the Catholic Church in San Diego by a male identified only as John Roe, and claimed to be just 10 years old when he said the predatory crimes began.

But space for survivors to slowly step out of the shadows, with or without the Vatican's lead, is now opening.

“(We) recognize that there have been incidents where Catholic sisters have sexually abused persons entrusted to their care,” said Sister Annmarie Sanders, a representative for the Chicago-founded Leadership Conference of Women Religious (LCWR), which brings together the leaders of Catholic nun congregations across the U.S. “These actions are horrific and we join with women religious throughout our country who deeply regret the suffering that has resulted for the survivors and, often their loved ones as well.”

“We are grateful for the courage of the survivors who have come forward. Because of them, our own understandings of the long-term effects of sexual misconduct have expanded and deepened,” she added. “We agree with the survivors who are calling upon women religious to keep working for the healing of victims and the prevention of further abuse.”

Trump, Maduro will be absent from Americas Summit