Washington: Top US national security officials agreed on Wednesday, local time, on a proposed range of options to present to President Donald Trump aimed at deterring any attack on US military or diplomatic personnel in Iraq, a senior administration official told Reuters.

The meeting was spurred by an attack on Sunday in which rockets landed in Baghdad's heavily fortified Green Zone compound targeting the US Embassy and causing some minor damage, the Iraqi military and the embassy said. 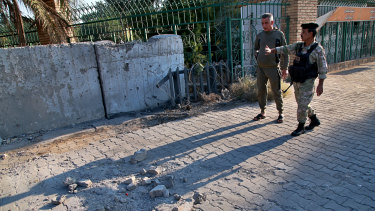 Security forces inspect the scene of the rocket attack at the gate of al-Zawra public park in Baghdad, Iraq in November.Credit:AP

A "range of options" would be presented soon to Trump, said the official, who would not describe the content of the options or say whether they included military action.

"Each one is designed to be non-escalatory and to deter further attack," the official said.

After the meeting, Trump, without giving evidence, said on Twitter that the rockets on Sunday were from Iran and "we hear chatter of additional attacks against Americans in Iraq."

Anti-rocket defences in action over the US embassy in Baghdad.

"Some friendly health advice to Iran: If one American is killed, I will hold Iran responsible. Think it over," Trump said.

The Iraqi military blamed Sunday's attack on an "outlaw group."

"While this 21 rocket attack caused no US injuries or casualties, the attack did damage buildings in the US Embassy compound, and was clearly NOT intended to avoid casualties," it said in a statement.

Another US official, also speaking on the condition of anonymity, said that after the meeting of senior leaders, the strategy was to be vocal about Sunday's attack but there was not a move towards using military force. The official added that the calculus could change if there were future attacks, especially if they harmed Americans.

In recent days there has been increased concern and vigilance about what Iranian-backed forces might do in the lead up to the anniversary of a January 3 US drone strike in Iraq that killed top Iranian general Qassem Soleimani, the official said.

Washington blames Iran-backed militia for regular rocket attacks on US facilities in Iraq, including near the embassy. No known Iran-backed groups have claimed responsibility.

The senior administration official said the aim of the White House meeting was "to develop the right set of options that we could present to the president to make sure that we deter the Iranians and Shia militias in Iraq from conducting attacks on our personnel."

US security agencies said on Wednesday they had highly credible information indicating that Iranian cyber actors were responsible for creating a website earlier this month featuring death threats aimed at US election officials.

The Federal Bureau of Investigation and the Homeland Security Department's Cyber and Infrastructure Security Agency said in a statement that the Enemies of the People website, which surfaced after the US election but now appears dormant, demonstrated "an ongoing Iranian intent to create divisions and mistrust in the United States and undermine public confidence in the US electoral process."

The agencies said they had previously warned that "Iranian cyber actors" likely were keen to influence and interfere with the 2020 US election.

A spokesman for Iran's UN mission did not immediately reply to emails requesting comment.

The alleged Iranian-created website accused US officials involved in election security of "treason."

The site, along with several associated social media accounts, included photographs of Republican and Democratic officials, with rifle crosshairs superimposed on them. It also included officials' purported home addresses.

The site also targeted several employees of Dominion Voting Systems, a voting-machine vendor that has been the subject of unsubstantiated conspiracy theories of vote manipulation.

A Dominion spokeswoman said those false claims have resulted in dangerous threats to the company and its workers.

Internet records hid the identity of whoever set up the site. Cybersecurity researchers said one of the pages was hosted in Russia, and some records include accounts registered through Yandex, a Russian email platform. But experts said such links did not prove any Russian government connection to the website.

Happy Nowruz 2018! How is the Persian New Year celebrated and what’s Haft-Seen?