Only a quarter of business that have temporarily closed during the coronavirus critic plan to reopen their doors within the next month, dampening efforts to kickstart the economy, new figures reveal today.

Just nine per cent of businesses told the Office for National Statistics they would be ready to open within a fortnight, with a further 16 per cent saying they could be ready within four weeks.

Almost half of those polled in May said they did not know when they might open, piling pressure on the Government’s economic plans.

Boris Johnson last month gave the go-ahead for non-essential retail to restart on June 15, as he attempted to bring the coronavirus-battered UK High Street back to life.

Outdoor markets and car showrooms have been open since Monday with strict social distancing guidelines.

The ONS figures, some of which may pre-date the May 25 announcement, show that 42 per cent of retailers would be able to reopen by the end of June. 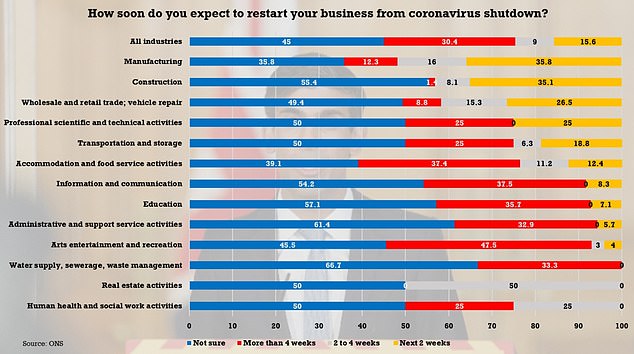 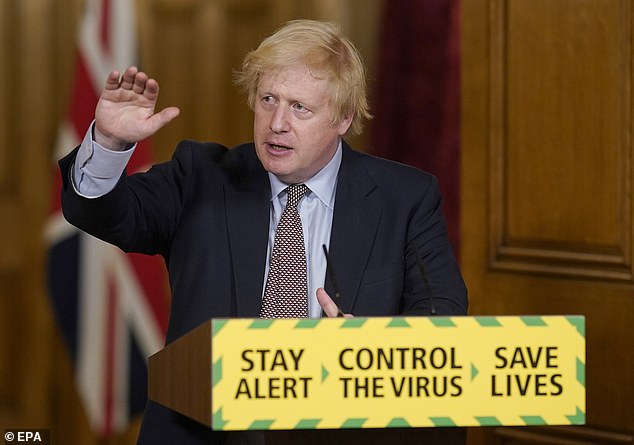 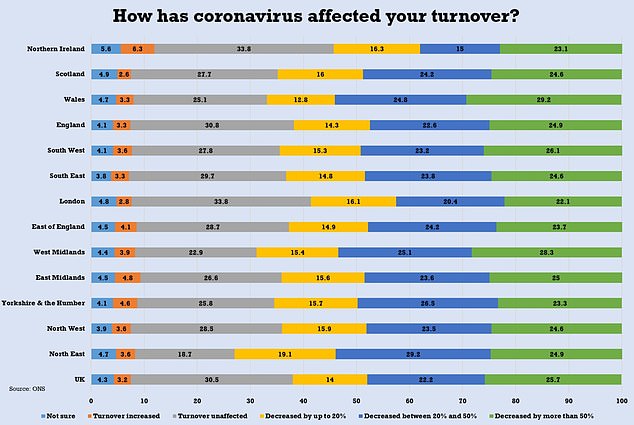 Grant Fizner, the INS’ chief Covid-19 economist, said: ‘One quarter said they expected to restart trading in the next four weeks, and another 30 per cent in more than four weeks.

Work was making the wellbeing of employees worse even before the Covid-19 crisis started, new research suggests.

A survey of more than 6,000 workers found the number saying work has a positive impact on their mental health has fallen from 44 per cent to 35 per cent over the past two years.

The Chartered Institute of Personnel and Development (CIPD) said its study highlighted that employers have not done enough to tackle the issue, and raised concerns about the further impact the crisis could have on people’s wellbeing, given many are worried about falling ill, losing their job or bearing the brunt of other cutbacks.

As the Covid-19 crisis was about to hit the UK, there were already ‘red flags’ about the impact work was having on wellbeing amid a general downward trend in work-related health, said the report.

One in five people said they were always or often exhausted or under excessive pressure at work, and one in 10 were miserable, the data indicated.

Jonny Gifford, senior research adviser at the CIPD, said: ‘Even before the Covid-19 pandemic struck, work was becoming worse for our health. This is the complete opposite of how it should be – work can and should have a positive impact on people’s lives.

‘As the full scale of the economic crisis unfolds, the outlook looks even bleaker. We’ll likely see employers trying to do more with less, which will only increase people’s workload and the pressure they are already under.

‘Many people will also be worried about losing their job or living on a reduced income.

‘While the Government is right to focus on protecting as many jobs as possible, it should also be encouraging employers to look at job quality.

‘Not only is there a moral imperative to do so, but if people are happy and healthy in their jobs they also perform better, take less time off and are less likely to drop out of the workforce. In the long run, this will help us get on the road to economic recovery sooner.’

‘If those predictions are born out, we would see the proportion of firms that have paused trading fall to under 10 per cent of all companies – around a third of the number seen at the start of this pandemic.

‘However, almost half (45 per cent) of paused businesses told us they weren’t sure when they would be able to restart trading, reflecting the high levels of uncertainty that many UK businesses continue to face.’

He added: ‘These averages mask a significant divergence in business impact across different industries.

‘In real estate, water & waste, and professional, scientific and technical services fewer than 5 per cent of businesses have paused trading. Information and communication, Transportation & storage, and Manufacturing were only a little higher.

‘But two industries have been particularly hard hit: around three-quarters of businesses in accommodation and food services and arts, entertainment and recreation, have temporarily closed.

‘Even more worrying, the vast majority of these expect their businesses will continue to be on hold in four weeks’ time.

‘Two-fifths of paused businesses in accommodation and food services, and almost half of arts, entertainment and recreation businesses, said they were not sure when they would be able to restart.’

The ONS data released today also shows the impact on company turnover, with 61.19 per cent of all UK firms reporting a decline in May.

Within England, the North East and West Midlands were the worst affected.

Jack Izzard, director of small business recovery group The Great British Bounce Back, said: ‘The fact that more than a quarter of UK businesses have seen their turnover halve, and nearly two thirds seen it decrease, says all you need to know about the problems to come.

‘Reduced turnover will mean a lot businesses are burning through cash reserves to cover their overheads and costs, and those cash reserves will only last so long despite the furlough scheme.

‘When the furlough scheme draws to a close, businesses will feel the full impact of reduced turnover and will have to make cuts and savings in multiple ways in order to recalibrate.

‘Those businesses lucky enough to have been able to take out a Government-backed loan will be under less pressure but turnover is the oil of a business and when it dries up firms have to either restructure or face ruin.’

Mr Johnson used a rare appearance at the Downing Street daily press conference last night to warn workers that it was ‘inevitable’ there would be widespread job losses because of the coronavirus lockdown today.

But the Prime Minister said that few countries around the world has done as much to put ‘our arms around workers’ as he led the daily Downing Street press conference.

He pledged to follow the furlough and business loan schemes that have ploughed hundreds of billions of pounds into keeping firms afloat and preventing people being laid off.

He insisted that he would lead an ‘activist and interventionist’ Government that would seek to invest the UK back to health.

It came as a new warning came that tens of thousands of aerospace and aviation workers are set to lose their jobs as a result of the coronavirus crisis.

Paul Everitt, chief executive of industry body the ADS Group, said redundancies will be made in the coming weeks and months because of the collapse in demand for flights.

He told the Business, Energy and Industrial Strategy Committee it was ‘very difficult’ to see demand return quickly, so airlines and other companies will be forced to restructure or ‘resize’.

Mr Everitt told MPs that the Government’s controversial decision to press ahead with its quarantine plans for people arriving in the UK would lead to a further period of uncertainty for the sectors his group represents.

The industry believed the right approach would be to put in place measures to minimise the risk of anyone getting on to an aircraft who might be affected by the virus, he said.

‘Summer is incredibly important for airlines, so the fact that they are not able to sell tickets with confidence in July and August is a clear worry and will only mean the recovery will take longer and be more painful.’

Stephen Phipson, chief executive of Make UK, told MPs that one in four manufacturers were planning to make redundancies in the next few months.

He voiced fears about the loss of skills in the industry, saying he had spoken to the Education Secretary about the need to tackle the issue.

Gareth Stace, director general of UK Steel, told the committee that the steel industry was in a ‘difficult position’ before the current crisis, with falling prices for its products and rising costs for raw materials.

UK steel companies also faced higher electricity charges and business rates than competitors in other countries such as Germany, he said.

‘The Government needs to build a bridge to help us through this crisis. There is no point in the Government saving the steel sector from going out of business now, if it is not going to work with us and trade unions to develop a brighter and sustainable future.

‘It is totally within the Government’s gift to do that.’

Mayor urges people to avoid central London ahead of protests