‘Charming’ opera singer, 48, is found guilty of cheating wealthy widow out of more than £100,000 intended for a children’s charity and spending it on classic cars 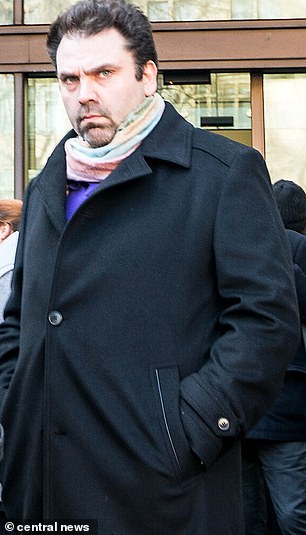 A top opera singer who cheated a wealthy widow out of more than £100,000 to spend on classic cars is facing jail.

Andrew Amdur, 48, fleeced 66-year-old Elizabeth Shaheen by pretending he would organise a party in memory of her late husband and make a donation on her behalf.

Mrs Shaheen transferred £80,000 to what she believed was the London Black Cabs Charity for underprivileged children but in fact Amdur had given the bank his own account details.

Amdur, who has sung at Twickenham rugby internationals, stole a further £25,000 from the grieving widow that was supposed to go towards a harp.

The instrument was later discovered in storage under his name.

Jurors found the opera star, who claims to have performed for the Queen, guilty of two counts of fraud and a further count of theft after just under 4 hours of deliberation.

Southwark Crown Court heard how the widow’s husband died in 2012, leaving her ‘utterly devastated and constrained by grief.’

‘It would seem that people found her charming, eccentric, generous, erratic perhaps – and you may take the view, having heard it all – vulnerable,’ said prosecutor James Marsland.

Amdur met Mrs Shaheen by chance in the summer of 2017 and soon became a regular visitor to her home in Clive Court, Maida Vale. 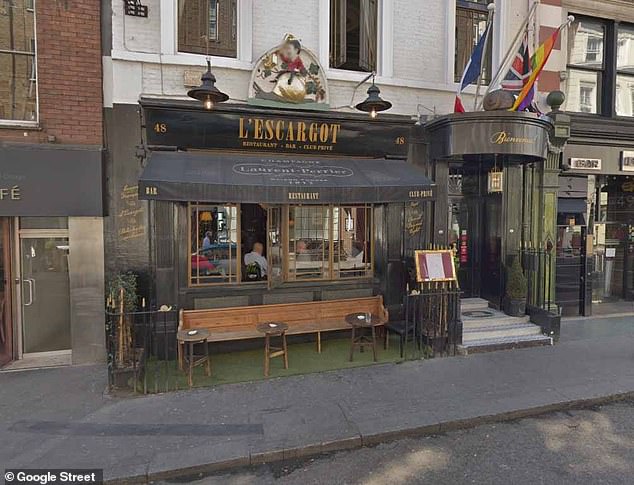 Amdur tranfered the money into his bank account, claiming £10,000 was for a party at L’Escargot Restaurant (pictured) in Soho

The victim would later say Amdur and his family ‘adopted me’ and would come and sing and dance for her at the flat.

Mrs Shaheen told the jury that she had clearly been unwell during their relationship and even suggested that the crooked tenor had drugged her.

During this time, Mrs Shaheen told Amdur that she wanted to make a donation to the London Black Cabs charity to take underprivileged children to Disneyland Paris in memory of her late husband. 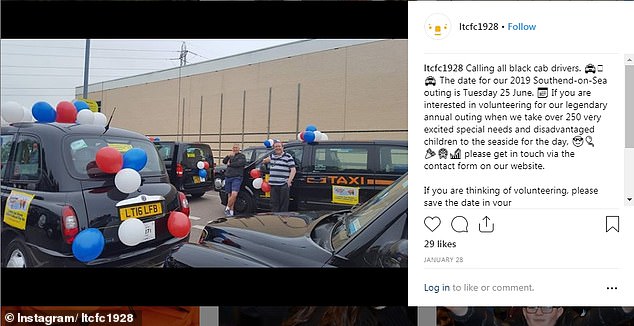 But Amdur tranfered the money into his bank account, claiming £10,000 was for a party at L’Escargot Restaurant in Soho.

Mr Marsland told the jury that the money went nowhere near a charity and Amdur told police that he had spent it on classic cars.

Mrs Shaheen also withdrew £25,000 in cash and was seen on CCTV handing it to Amdur in a bank in Pall Mall with the money supposedly going towards a women’s harp. 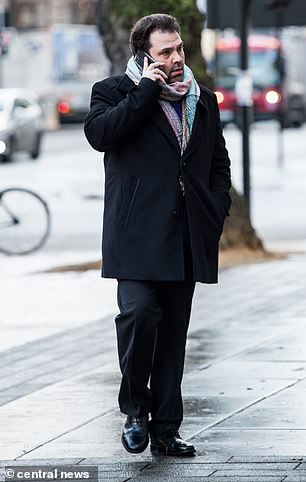 But police later found an 8ft instrument in a Big Yellow Storage unit that had been rented under Amdur’s own name.

Mrs Shaheen said the singer ‘put me in a mental state that was beyond comprehension.’

‘The most despicable part of this is they used a children’s charity for under privileged children to defraud me,’ Mrs Shaheen said.

Amdur insisted that he had been employed by the widow as a chaperone on £7,000 a month, adding: ‘I’m not heartless, I liked Mrs Shaheen very much..’

He said: ‘I worked very, very hard and it was very exhausting. This is a lady that liked leisure, she enjoyed life. She liked to go to salubrious locations.’

Amdur explained that he believed the £80,000 was payment for his chaperoning services and became ’embarrassed’ when Mrs Shaheen told the bank that the money was for charity.

He said that he runs several classic cars and had spent the money on that.

Amdur, of Kingsgate Avenue, Golders Green, denied two counts of fraud by false representation and a single count of theft but was convicted by the jury.

Bailing the tenor ahead of sentence Judge Nicholas Loraine-Smith said: ‘I will grant him bail with condition of residence at his home address.

‘Don’t think this is not serious – I view this case extremely seriously. It will inevitably be a prison sentence.

‘You must face up and prepare for an appreciable prison sentence.’

He will be sentenced at Southwark Crown Court on 10 May.