Aboriginal health services in Mildura are racing to boost vaccination rates among the Indigenous community in the state’s north-west as fears rise over low inoculation rates coupled with growing COVID-19 cases in the Mallee.

A coronavirus outbreak in Mildura, which grew by 18 cases on Sunday bringing the total to 55, has hit the local Indigenous community, and there are fears the state’s Aboriginal people will be left behind as Victoria charts a path to freedom and prepares to reopen the economy from late October. 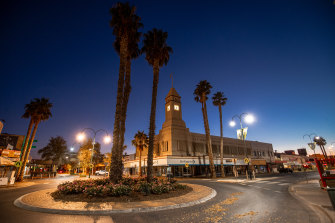 Mildura has entered a snap lockdown after case numbers went from one to 37 in a week. As of Sunday, it stands at 55 cases. Credit:

“The whole mishandling of the AstraZeneca rollout was the biggest tipping point for our community,” Ms Turfey said.

“There was already a baseline fear of vaccines, and that made it worse. Then there was the age restriction on vaccine availability. And even though we had earlier access than the general population, the damage had already been done and the staggered release limited the number people taking it. Everyone needed to appreciate the bulk of our population is young, and I think for our community in Mildura there was a sense that COVID is so far away, there’s no real rush or sense of urgency.”

However, the virus now poses a real threat to Mildura, and local Aboriginal groups are still asking why their communities were left behind in the vaccination race when First Nations people were meant to be among the first priority groups.

Jill Gallagher, chief executive of VACCHO, told The Age she was still asking state and federal authorities what had gone wrong.

A software bug that falsely inflated vaccination rates among Aboriginal people “did a lot of damage”, Ms Gallagher said, and despite realising the number of Indigenous people who had been inoculated was far less than initially anticipated nothing was done to boost immunisation efforts.

“I don’t care if it’s the state or federal or local government – someone has to be accountable,” she said. “I don’t know who’s to blame but once again our communities are in trouble.”

According to the latest available federal government data on Indigenous vaccination, Victoria’s north-west region, including Mildura, is the second-lowest in the state with 60.2 per cent single-dose coverage and 33.3 per cent double-dose.

About 83.7 per cent of the local government area of Mildura’s entire population had received one dose as of Friday, slightly below the state average of 85.2 per cent.

Ms Turfey said those figures are potentially much higher given an influx of people who had come out to get vaccinated since cases emerged, and the region entered into a seven-day lockdown, late last week.

The federal Department of Health said the COVID-19 vaccination taskforce, Operation COVID Shield, had increased supply of vaccines and offered extra support for testing in response to the growing outbreak in Mildura.

“The government’s approach in northern and north west New South Wales increased vaccination rates from around 40 per cent to 70 per cent in a matter of weeks. This successful approach has guided the wider acceleration plan,” a department spokeswoman said.

“The taskforce is also working with the Advisory Group and communities across Australia to identify additional ways in which the government can provide support to ensure that every Aboriginal and Torres Strait Islander has the opportunity to receive COVID-19 vaccine. For example, through establishing pop-up clinics, facilitating family vaccination days and providing community engagement teams to assist with education.” 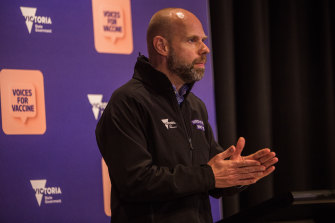 Meanwhile, COVID-19 Commander Jeroen Weimar said the state government had deployed additional staff to Mildura to help the community, including the health system, to cope with growing COVID-19 cases.

Unlike in Shepparton, where almost half the town was forced into isolation due to being at exposure sites, Mr Weimar said authorities had a more targeted approach to reduce the impact on services.

“Our health services now have exceptional experiences and how we use PPE at all the protocols are maintaining COVID safety, that is why we have on the whole, a low number of health service staff who are COVID positive at this time, and that is how we manage the health services,” Mr Weimar said.

Stay across the most crucial developments related to the pandemic with the Coronavirus Update. Sign up for the weekly newsletter.