Washington: The accords the United Arab Emirates and Bahrain have signed with Israel in the US were hailed by President Donald Trump as a "foundation for a comprehensive peace" across the Middle East and touted as a crowning achievement of his presidency.

Yet despite all the pomp of a grand White House signing ceremony on Wednesday AEST, the documents released hours later, while making several sweeping promises — especially between the UAE and Israel — left many crucial questions unanswered. 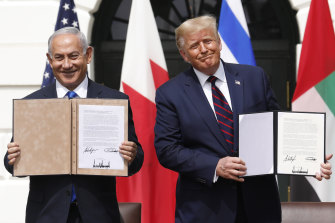 The "Abraham Accords" declaration, which Trump joined in signing, and Bahrain's deal with Israel are single-page documents. The first offers to pursue a "vision of peace, security and prosperity in the region," and the second holds out little beyond an agreement to establish diplomatic ties. That's significant in itself, but the declaration acknowledged that other achievements would be left for later.

A White House official briefing reporters earlier had said the Bahrain deal would be less detailed because the Gulf nation agreed to the accord only last week.

The lengthier UAE agreement — formally a treaty first announced last month and that needs to be ratified — affirmed a promise to exchange ambassadors "as soon as is practicable". But no details or timelines were spelt out in any of the accords, and analysts disputed the idea that the agreements signified "peace" for the region. 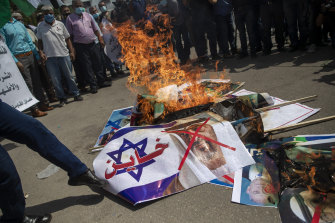 Like some other Gulf nations, including Saudi Arabia, the UAE and Bahrain have had back-channel contacts with Israel for decades, while conflicts still rage from Libya to Syria to Yemen. What the agreements do is bring those dealings out into the open.

Among questions that remain is whether Israel will formally commit to pause annexation of parts of the West Bank. Israeli Prime Minister Benjamin Netanyahu's threats to push forward on taking disputed territory helped accelerate the deal as the UAE offered diplomatic recognition in exchange for setting annexation aside — at least for now.

"This day is a pivot of history," Netanyahu said at the White House ceremony. "It heralds a new dawn of peace."

There are also lingering questions, such as the degree to which the UAE's demand for next generation American F-35 jets played a role in its willingness to sign an accord, and what promises the US made — and Israel acceded to — for it to go ahead. The agreements don't mention the weapons sales, and Israel had previously been loath to let countries like the UAE get the advanced fighter plane out of a fear of seeing its military advantage in the region eroded.

The deals do signal shifting Middle East politics. They were born in part from an agreement among the countries present that the primary concern in the region is no longer the Palestinian issue but the threat posed by Iran.

Gulf nations and Israel were unified in their opposition to the Obama administration's decision to sign an accord in 2015 lifting sanctions on Iran in exchange for limiting the Islamic Republic's nuclear program. They cheered Trump's decision three years later to ditch the deal and open a campaign of "maximum pressure" sanctions against Tehran.

"The wish was there, the cooperation was growing and growing underneath the table," said Haim Tomer, a former senior official of Israel's Mossad who led intelligence and foreign operations. "The interests are there for many, many years but to come into the open it's certainly because of the fact that Trump was pushing." 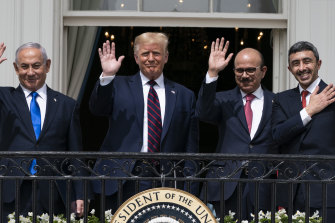 The question is whether the newfound unity will deter Iran or lead it to accelerate its nuclear program, provoking greater tension in the region. Since the US left the accord, Iran has started stockpiling enriched uranium beyond levels in the agreement.

The ceremony also underscored just how far all the parties had come and how much the dynamics of the region have changed: In a matter of minutes, the White House's Truman Balcony was the site of speeches in English, Hebrew and Arabic, with top officials from states that up until that moment had formally denied Israel's right to exist saying it was time to get along.

The deals were the first of their kind in more than a quarter century, since Jordan signed a peace agreement with Israel — also at the White House — in 1994. The only other country to have done so was Egypt, two decades before that. And while those agreements didn't lead to much actual interaction with Israel, the hope this time is that the UAE and Bahrain will engage in significant trade and other exchanges.

"There's going to be a big push to inject real substance into it early on," predicted Robert Satloff, executive director of the Washington Institute for Near East Policy. "The range of areas of potential cooperation — technologically, economically, educationally — the sorts of things that were hoped for and identified in the Egypt and Jordan peace treaties that were never really developed."

It was clearly a moment of glory for Trump, coming less than 50 days before the US election. Netanyahu and the foreign ministers of Bahrain and the UAE offered effusive praise for the American President, calling him "our dear friend" and saying the US remains a "beacon in human history for all peace-loving people around the world."

It wasn't a universal sentiment. Palestinian leaders reiterated earlier denunciations of the accords as a betrayal of their cause. On Sunday, President Mahmoud Abbas' office issued a statement saying that "no peace, security or stability would be achieved for anyone in the region, without ending the occupation and achieving the Palestinian people's full rights as stipulated in international legitimacy resolutions."

And there was a similarly symbolic but more ominous event that occurred just as the White House ceremony was underway: rockets were fired into Israel around the city of Ashkelon, underscoring how long the road to true regional peace remains.

Tim Ryan: 5 Things To Know About Ohio Congressman Running For President In 2020