Heartbroken zookeepers have been told birds affected by avian flu will be culled as the zoo closes to try and stem the outbreak.

Bosses at Paignton Zoo in Devon confirmed they have had a positive case of avian influenza in both a pelican and peafowl, with some birds on site having to be quarantined and the zoo remaining shut until Monday.

Devon and Cornwall and part of Somerset are under special control measures from the Department for Environment, Food & Rural Affairs (DEFRA).

Officials are assessing the extent of the outbreak before determining the next course of action as the zoo says their priority is to ‘protect their birds’. 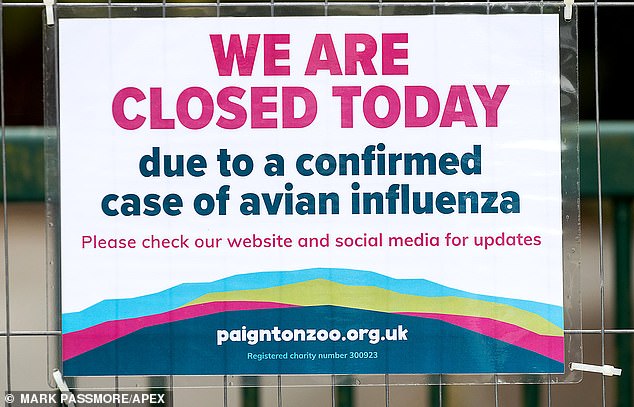 Paignton Zoo, Devon, will remain closed to visitors until Monday September 5 after confirmed cases of avian influenza in a pelican and peafowl 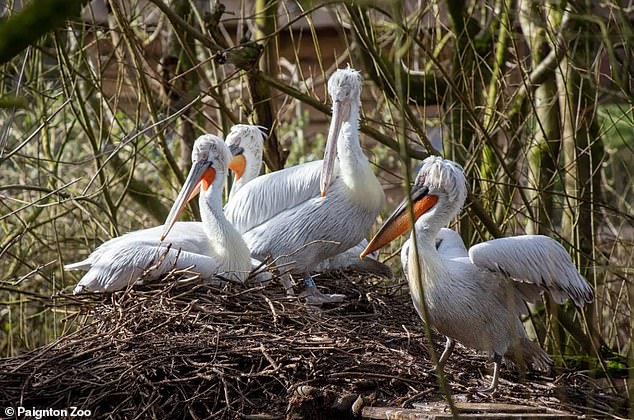 ‘Throughout this incredibly difficult period we have been working closely with officials from the Animal and Plant Health Agency (APHA) and the Department for Environment, Food & Rural Affairs (DEFRA) as they assess the extent of the outbreak and determine their next course of action.

‘Our mission at Wild Planet Trust is to protect at-risk species and we firmly hold onto our belief that every species is important.

‘Despite the continuing hard work by all of our staff to minimise the impact of this disease upon our animals, we have been informed by DEFRA that affected animals will be humanely culled.

‘This action will be undertaken by staff from DEFRA.

‘We are currently waiting for clarification from APHA on which species they consider to be directly affected and we anticipate being informed imminently.

‘Once we have received this information we will comply with APHA requirements.

‘This is heart-breaking news for all of us here at Paignton Zoo and our priority at this time remains to do all we can to protect our birds.’

The statement said the zoo will continue to  implement biosecurity measures and quarantine plans which include relocating birds to new quarantine facilities on-site.

Bosses at the zoo said the news that affected animals will be culled was ‘heartbreaking’ and said the action would be humanely undertaken by staff at the Department for Environment, Food & Rural Affairs (DEFRA)

Bird flu – and how it spreads

Bird flu, otherwise known as avian flu, is an infectious type of influenza that can spread among birds – and in rare cases can affect humans.

Many different strains of bird flu virus exist, most of which do not infect humans.

But four strains have caused concern in recent years.

H5N1, H7N9 and H5N6 do not infect people easily and are not usually spread from human to human, but several people around the world have been infected, which has led to a number of deaths, according to the NHS.

In February 2021 the strain H5N8 infected a small number of people for the first time, in Russia.

Just 860 people have been infected with H5N1 globally since 2003 from 18 countries. The risk to people has been deemed ‘low’.

But people are strongly urged not to touch sick or dead birds because the virus is lethal, killing 53 per cent of people it does manage to infect.

Bird flu is spread by close contact with an infected bird – whether dead or alive.

People are also advised to avoid visiting markets where live birds are sold as these can be a source of avian flu.

Bird flu can not be caught through eating fully cooked poultry or eggs.

Anyone who has booked a visit will be notified and refunds will be processed as soon as possible, the zoo confirmed.

‘We would like to thank all of our incredible team who continue to go above and beyond to safeguard the health and welfare of our animals during these challenging times,’ their statement added.

‘We would also like to thank everyone for their continued understanding and support.’

MailOnline has reached out to Paignton Zoo and DEFRA for further comment.

Baby brain dead after being left in Harlem bathtub