Islamabad: Naeem Rashid, 50, a teacher and father of three who emigrated from Pakistan to New Zealand a decade ago, was busy this month planning the wedding of his son Talha, 21.

Neither father nor son lived to celebrate the occasion. 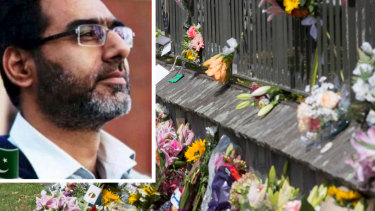 Video footage of the shootings showed Naeem Rashid trying to tackle the gunman before being shot.

Both were killed on Friday, along with seven other Pakistanis, when a gunman struck at two mosques in Christchurch, New Zealand, killing at least 50 people and wounding scores.

But since then, Rashid has become a national hero in his native country, after video footage of the shootings showed him trying to tackle the gunman outside one mosque before being shot.

"My brother was a brave man who died to save others. His death showed how he cared for humanity," Rashid's brother Khurshid Alam said in a telephone interview on Sunday from his home in Abbottabad, Pakistan. 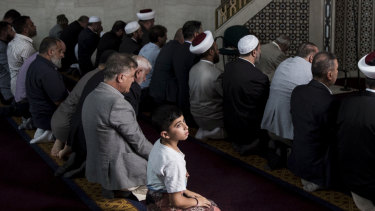 New Zealand prayers at the Lakemba Mosque on Saturday after the terrorist attack in New Zealand. Credit:Dominic Lorrimer

Just a few days ago, he said, "we were talking to Naeem about the family coming to Pakistan for Talha's wedding. Now we are talking about his death and funeral arrangements."

Alam said that Rashid and his son, who was shot alongside him, "fell victim to terrorism. … The whole world should work together to eliminate this scourge."

Avowed neo-Nazi Brenton Harrison Tarrant, a 28-year-old Australian, has been charged in the massacres.

Pakistan has been both a victim and alleged source of Islamist terrorism for two decades. Even as tens of thousands of Pakistanis have been killed in Islamist militant attacks, India, Afghanistan and the United States have accused it of sheltering and supporting other militant groups that stage attacks abroad. 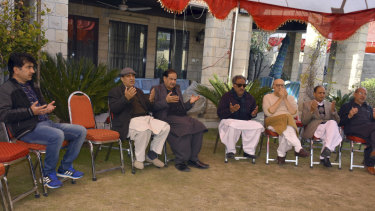 Relatives and neighbors pray for Pakistani citizens Naeem Rashid, and his son Talha Naeem, who were killed in the Christchurch mosque shooting, in Abbottabad, Pakistan. Credit:AP

The slayings in Christchurch signified a relatively rare instance in which Muslims living peaceably overseas have been targeted by mass violence because of their religion.

Pakistani Prime Minister Imran Khan announced on Sunday that Rashid would be given a posthumous national award for bravery. In tweets after the attack, Khan said the nation was proud of Rashid, "who was martyred trying to tackle the White Supremacist terrorist."

Khan said the Christchurch attacks "reaffirm what we have always maintained: that terrorism does not have a religion."

He also said, "I blame these increasing attacks on the Islamophobia post-9/11, where Islam and 1.3 billion Muslims have collectively been blamed for any act of terror by a Muslim."

His government declared Monday a national day of mourning and ordered all flags to be flown at half-staff.

In an editorial Sunday, the English-language Pakistani newspaper Dawn said that the "violent hatred undergirding such mass murders" is linked to a process of "ultra-right radicalisation that Western political and intellectual leaderships have done little to address." It said that "antipathy towards Muslims, anti-immigration rhetoric and permissiveness towards hate speech" have all contributed to such violent extremism.

Pakistan's Foreign Ministry on Sunday confirmed the deaths of seven other Pakistanis in the mosque shootings.

One was Syed Areeb Ahmed, 27, an accountant from Karachi who had recently moved to New Zealand to take a new job. Ahmed's father, Syed Ayaz, Ahmed told journalists in Karachi that the family had been worried and begun praying for him when they heard of the mosque attacks and were unable to reach him.

"We continued to pray for him, but he is no more. I loved my son," Ahmed said. "I am devastated."

Among the other Pakistanis killed were Syed Jahandad Ali, 34, a man whose wife and children were on a visit to Pakistan at the time; a couple, Ghulam Hussain and Karam Bibi, and their son Zeeshan Raza; and Mahboob Haroon, 40, an academician and father of two.

Naeem Rashid, a former banker, was reported to have moved to New Zealand to pursue graduate studies. His wife was a teacher there, and their three sons were all students. He was also the cousin of a former Pakistani legislator from Abbottabad, Amna Sardar.

"He treated me like a sister. He was a humble and decent man," Sardar said in an interview. "But he died as a brave man, the way he lived. I am so proud of him. If he hadn't tried to stop the killer, many more people would have been killed."