ANOTHER reason not to go! Paris Hilton shows off her hot pink outfit as she joins thousands in Nevada desert for Burning Man

Hilton, 41, showcased one of her looks on her Instagram story that featured a pink full-body spandex suit with fairy wings and midi leather boots.

The socialite styled her hair in two high pigtails while wearing pink-shaded sunglasses topped with a pair of heart-shaped goggles around her forehead. She was last spotted at the festival in 2019.

Burning Man has been a 36-year tradition that welcomes self-expression to help ‘connect each individual to his or her creative powers,’ according to the festival’s mission.

The week-long event started on August 28 and runs until September 5 as nearly 80,000 revelers are expected to attend the festival known for its music and sex offers.

Event throwers eagerly advertised the event after a two-year hiatus due to the COVID-19 pandemic.

‘After a long hazy blur of pandemic insomnia, adrift between sleeping and walking, it’s time to start imaging the future again. After several long years, we are going home.’

Hilton is a long-time attendee and has notably documented her festival adventures in the Black Rock Desert of Nevada with her 20 million followers. 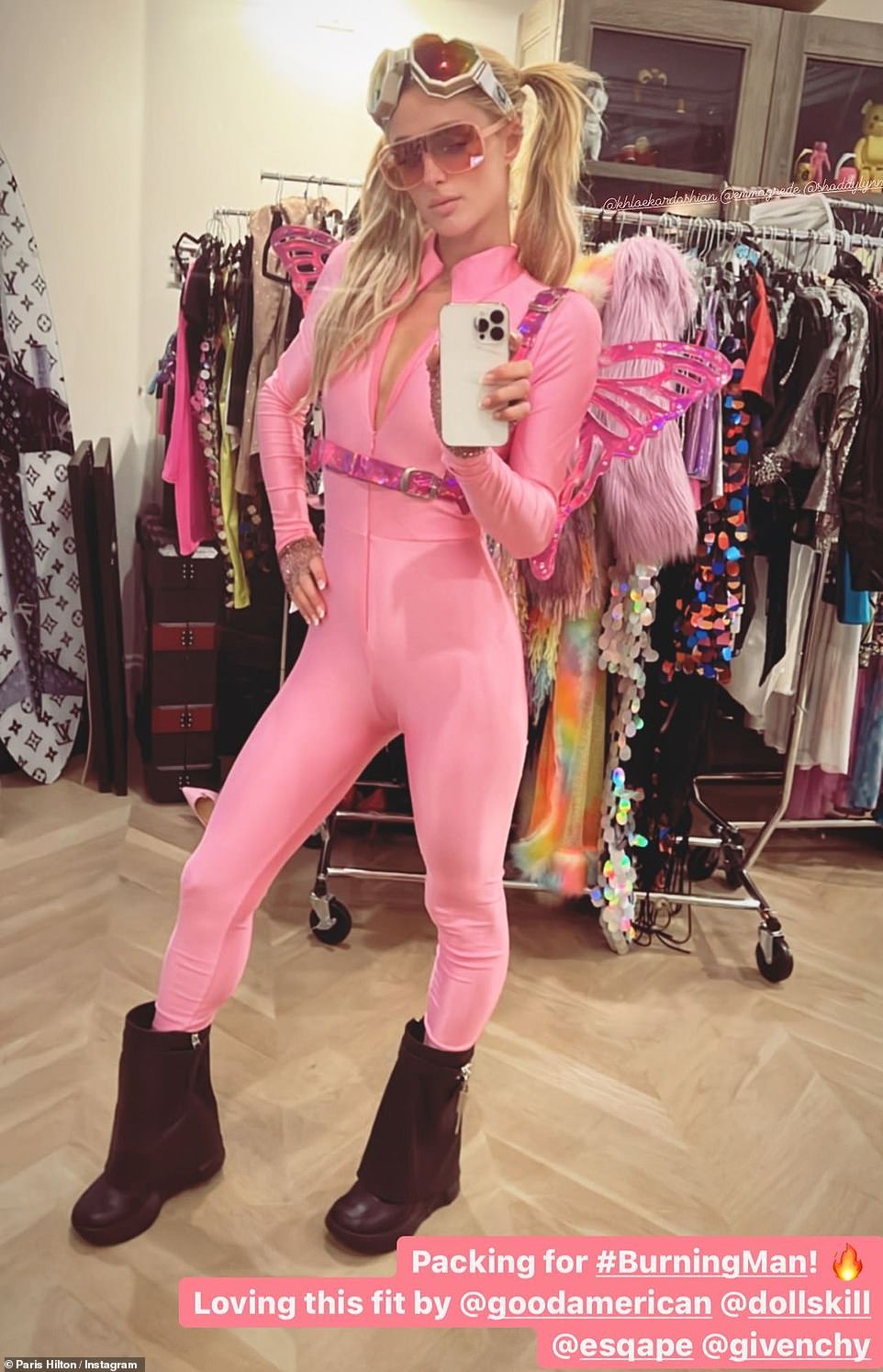 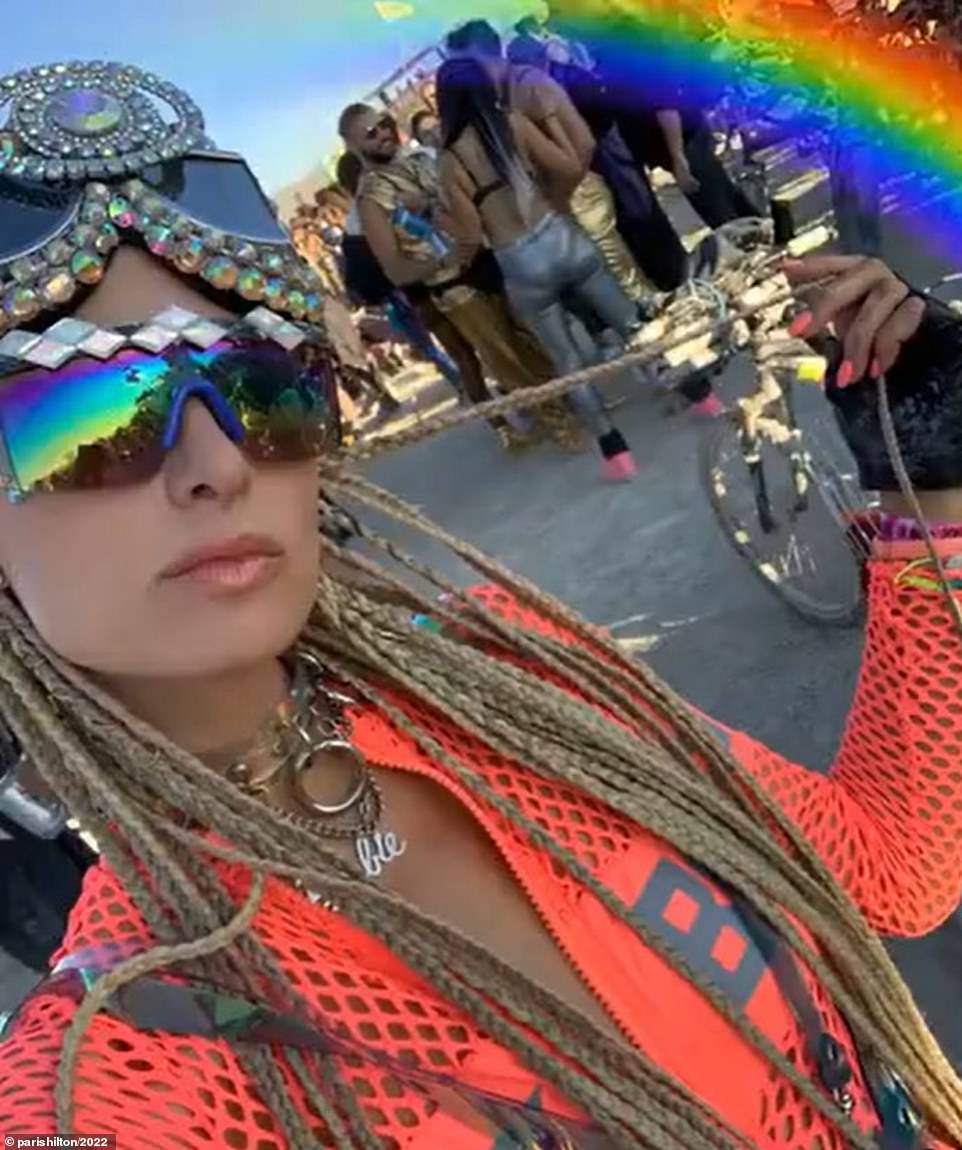 Paris Hilton at the Burning Man festival in 2019. She sported a neon look and long braids, along with rhinestone goggles and sunglasses 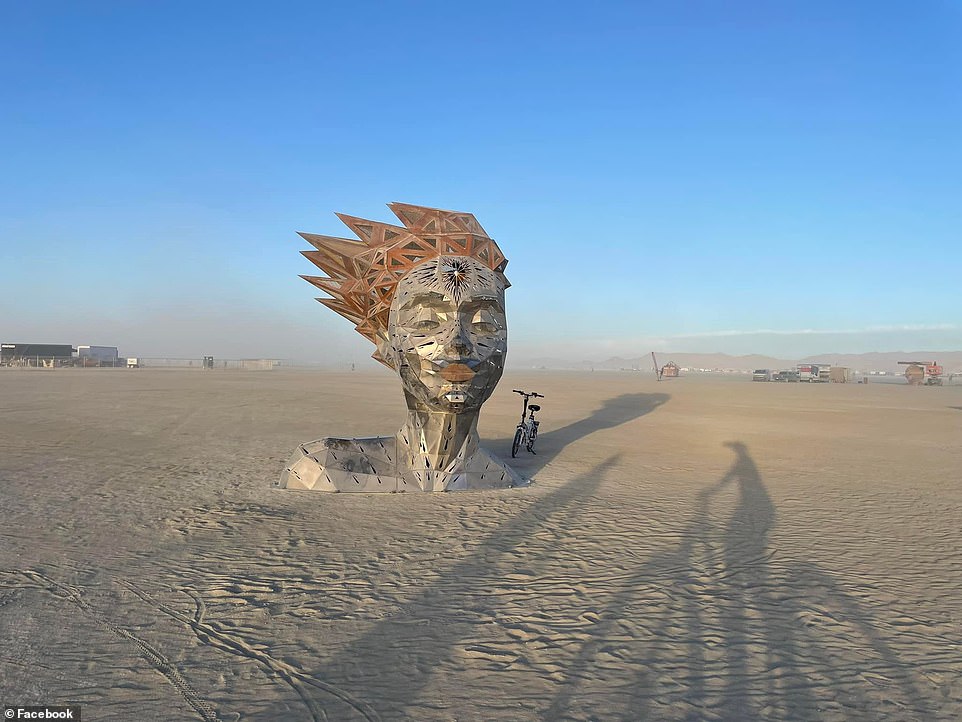 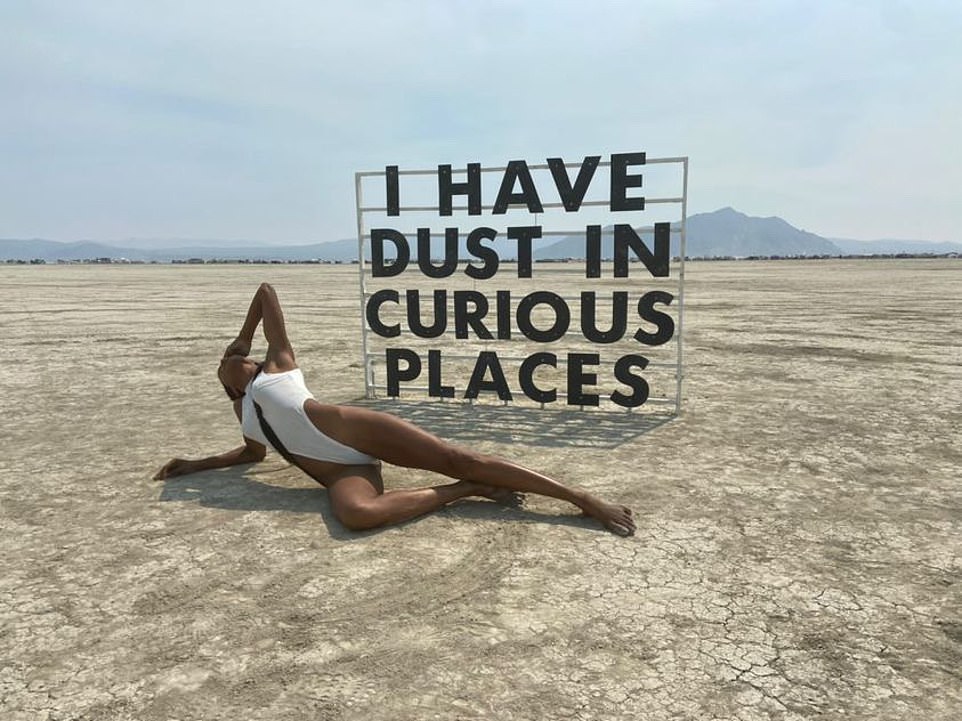 The festival brings in about 80,000 per year. The same amount of attendees are expected this year 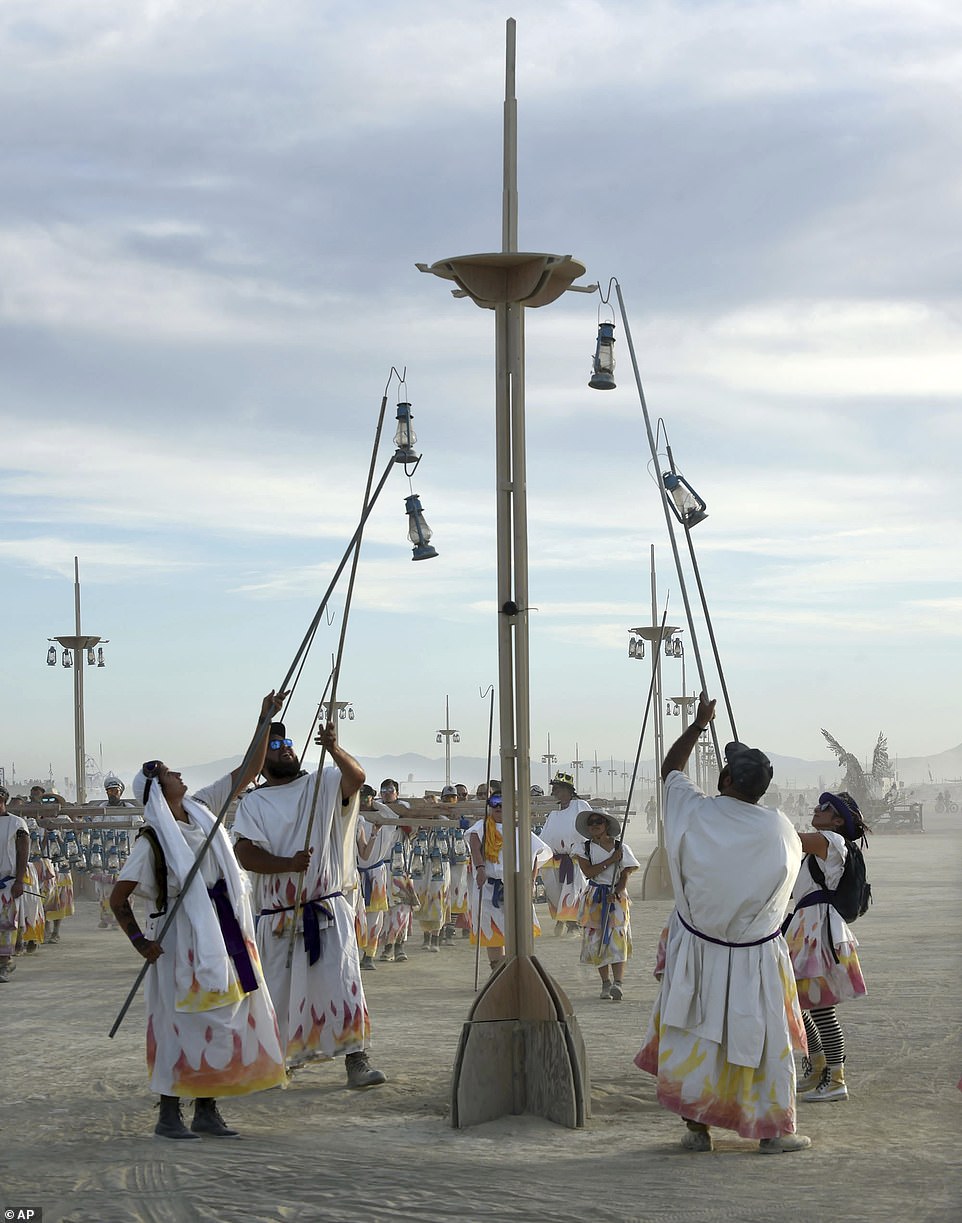 Event throwers eagerly advertised the event after a two-year hiatus due to the COVID-19 pandemic. The festival has been a ‘home’ for people to be themselves

Around 30,000 attendees descended on the unticketed festival in September, and Hilton wasn’t shy to showcase her quirky ensembles.

The Heiress showcased multiple ensembles, including a nearly sheer bodysuit with rhinestones and white lacing topped off with matching goggles and a pair of sunglasses.

A pink unicorn jumpsuit was also in the lineup topped with a silver cut-out bra, a rhinestone choker, and a black jacket. She also styled another pair of goggles and sunglasses.

‘Anywhere I can be around other creatives who feel free to express themselves is a place for me,’ Hilton wrote on Twitter at the time.

While the festival was halted in 2020 with no intervention from festival-goers, Hilton attended the 2018 and 2019 festivals.

She flaunted her quirky style with long braids and her iconic look goggles and sunglasses at the 2018 festival. Her electric outfit included a bikini top that accentuated her ample bosom. she wrapped a palm print skirt around her waist to match the print of her long-sleeve design.

Hilton wore the same heart-shaped aviator goggles that she has been seen with in the past.

The globetrotting socialite was also seen in the desert in 2017 and showcased her outfits in the spirit of the festival’s mission of creativity and individuality. She showed off colorful and decorative outfits, including one that showed off her slender body in a green fringed micro skirt and hot pink fringed tank top.

A fuzzy neon rainbow stole was draped over Hilton’s tanned shoulders. She was also seen in an all-gold ensemble that showed off her long legs.

She has been spotted at the festival since 2015. 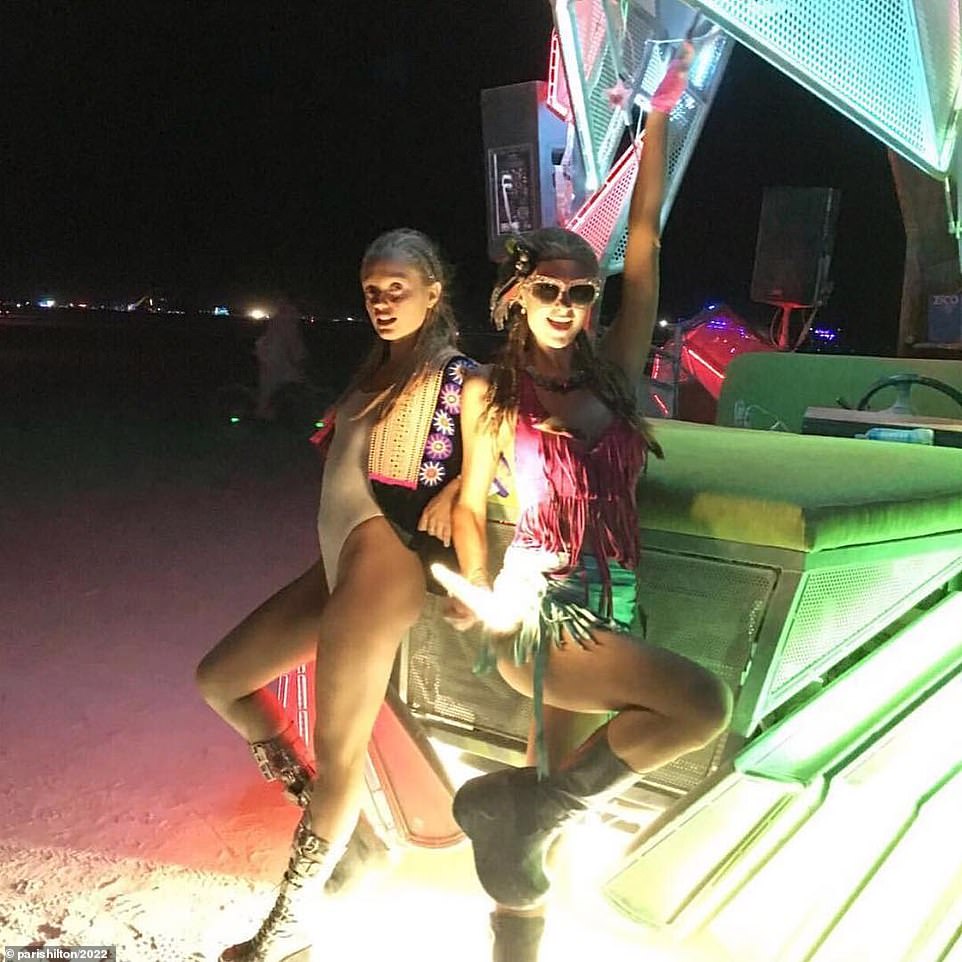 PICTURED: Paris at the Burning Man festival in 2017. She showed off colorful and decorative outfits, including one that showed off her slender body in a green fringed micro skirt and hot pink fringed tank top 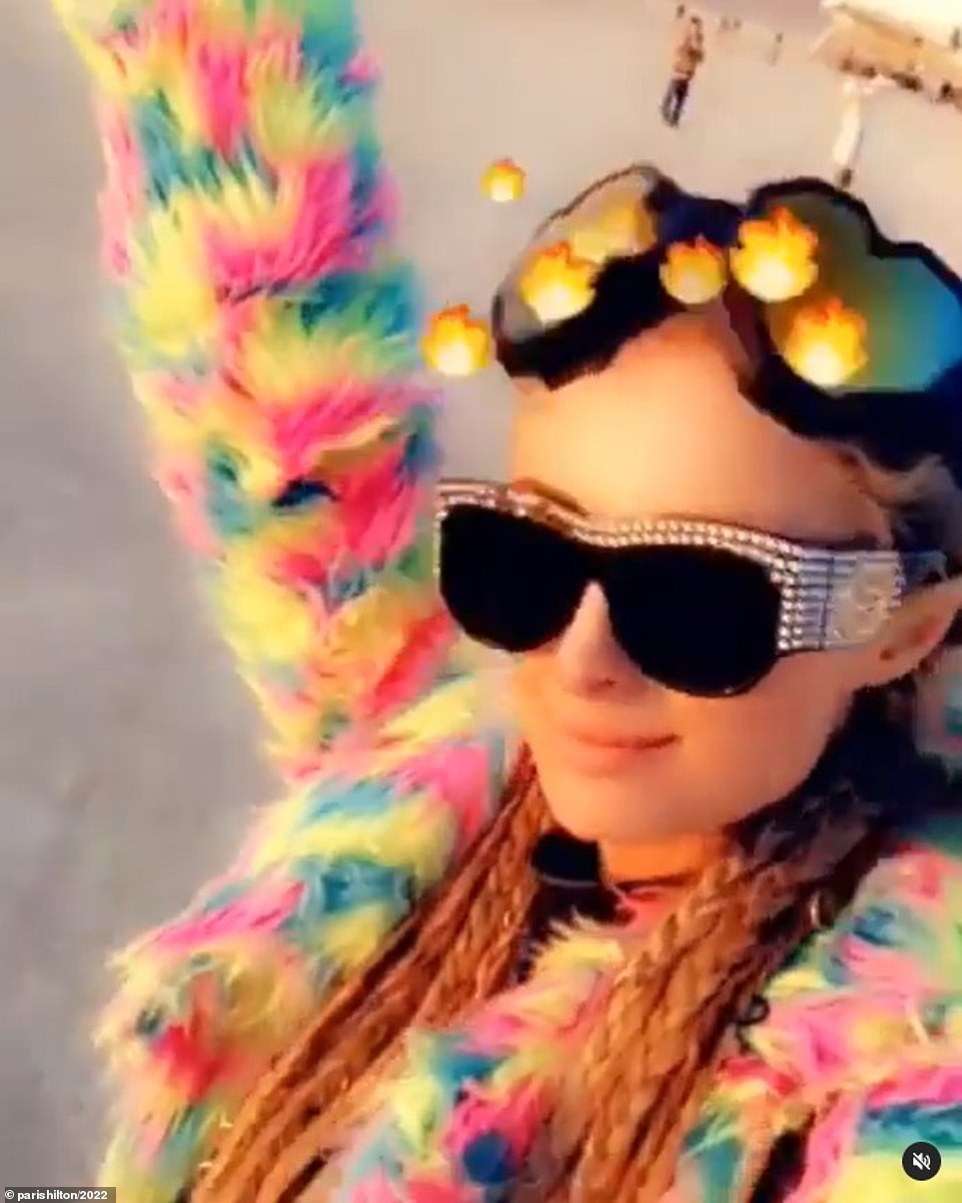 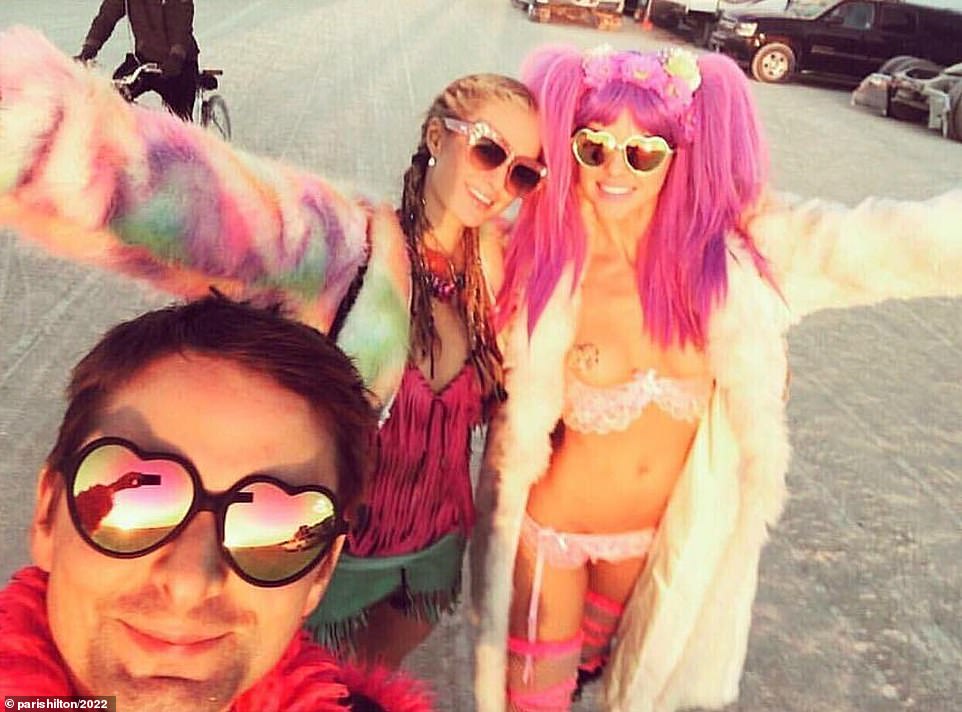 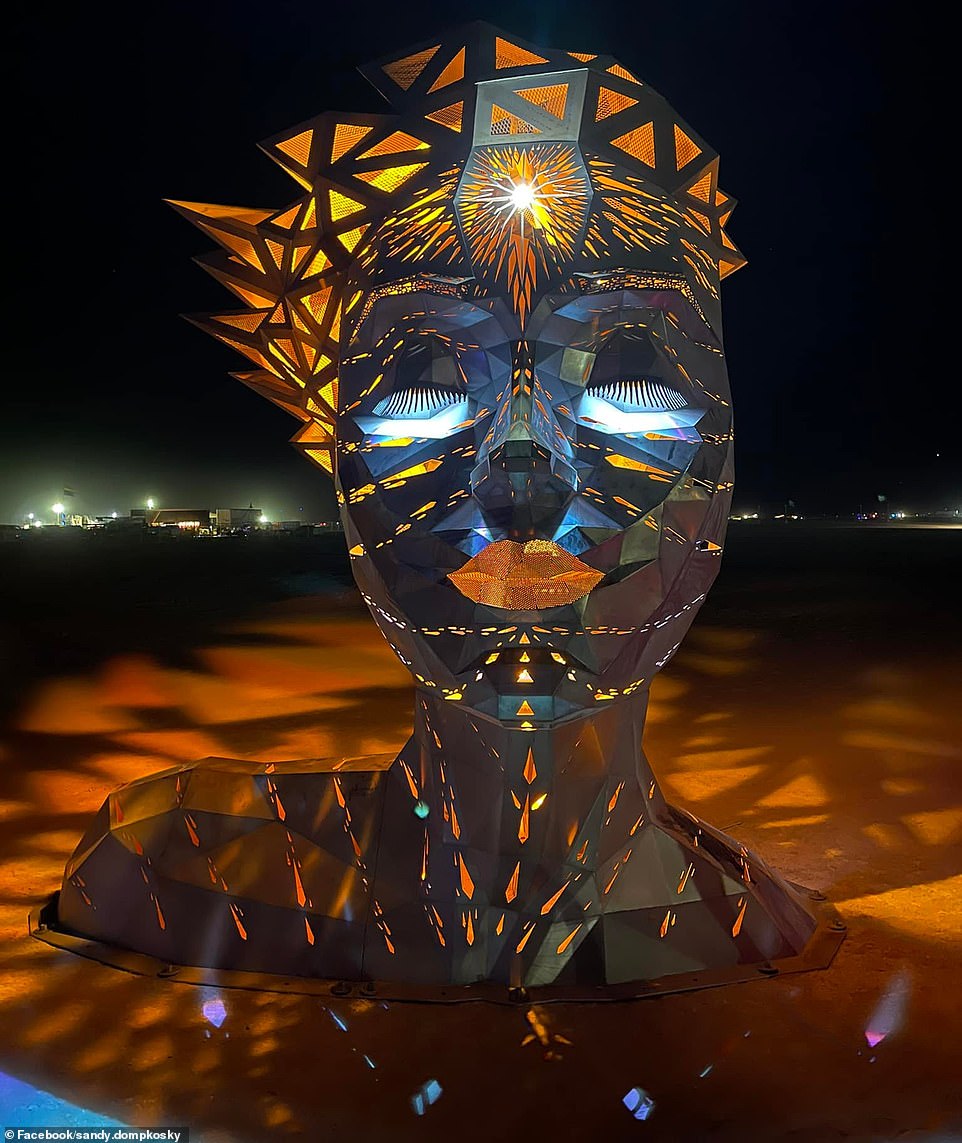 A variety of music choices from Latin to jazz and 80s pop concerts will be available for attendees.

Meditative activities are also offered for those seeking relaxation, including a hammock forest, a hypnotherapy session and communal peppermint bomb breathwork exercises, according to the San Francisco Gate.

For those who want to expand their mind, Burning Man will also offer several educational sessions on topics like the intersection of artificial intelligence and astronomy, as well as the use of psychedelics in surgeries.

One person was photographed nude. 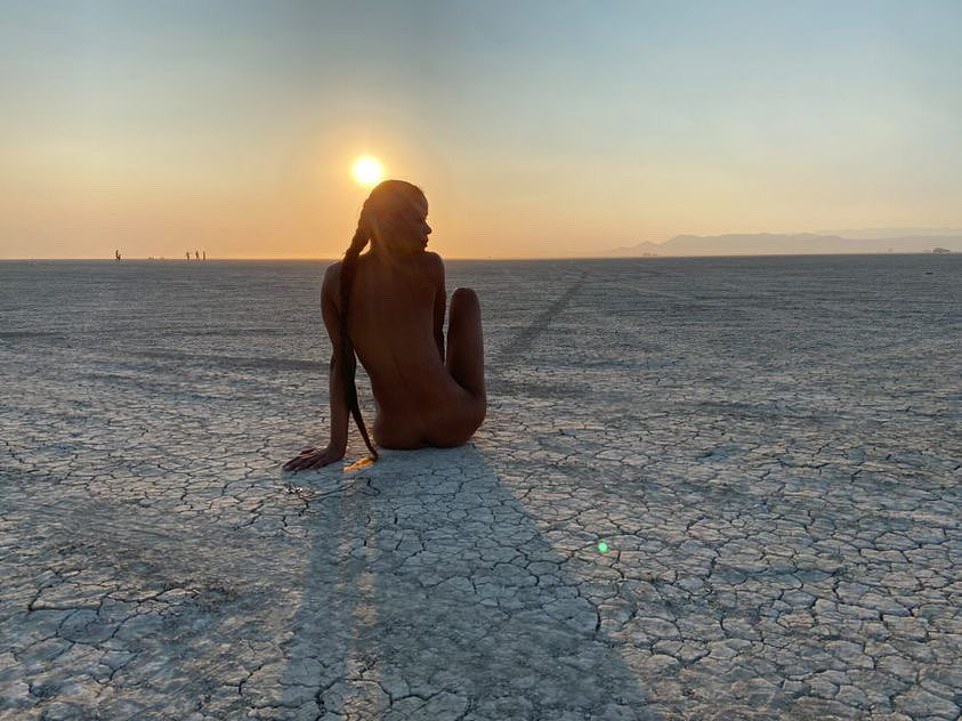 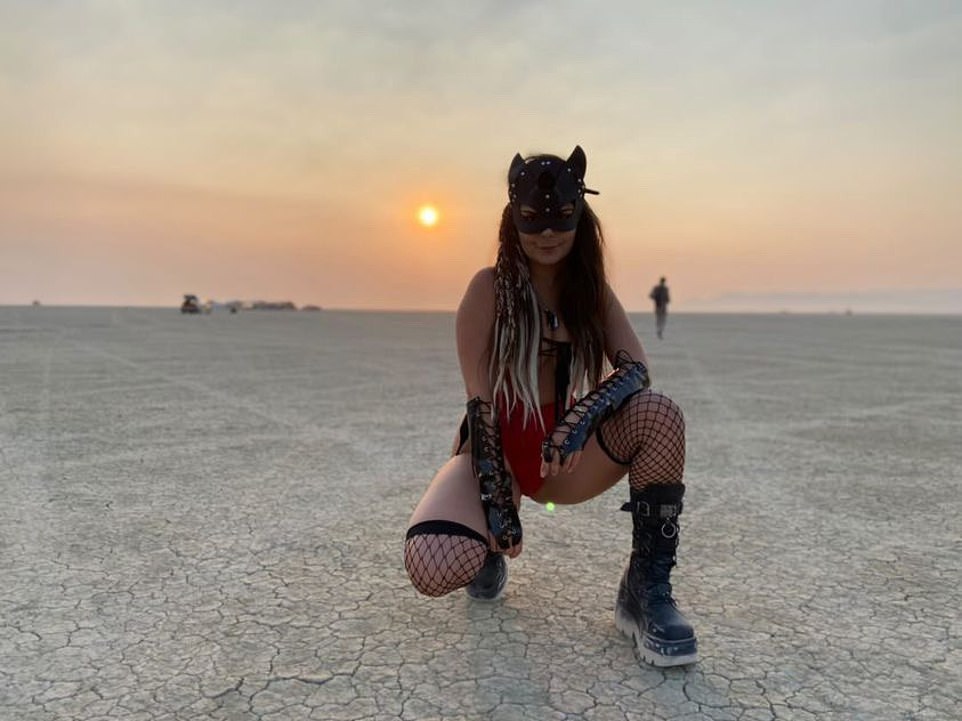 Burning Man is also known for its art installations, which this year features a dragon and bear-shaped honey containers.

It also encourages mutant vehicles and art cars, which are ‘unique motorized creations that either show little or no resemblance to their original form or to any standard street vehicle or is out of context for its normal setting (a pirate ship or space ship on the desert, for example).’

And while all that’s going on, Massachusetts Institute of Technology Media Lab researchers will hand out 600 small vessels that look like Altoids tins, in hopes that people pass them around and use the pen and paper inside to notate where and when they received the item as well as where they’re camping.

Using however many tins make their way back to the team after the weeklong event, Axios reports, the researchers will ‘map the economy of Burning Man,’ where people operate on a gifting system. 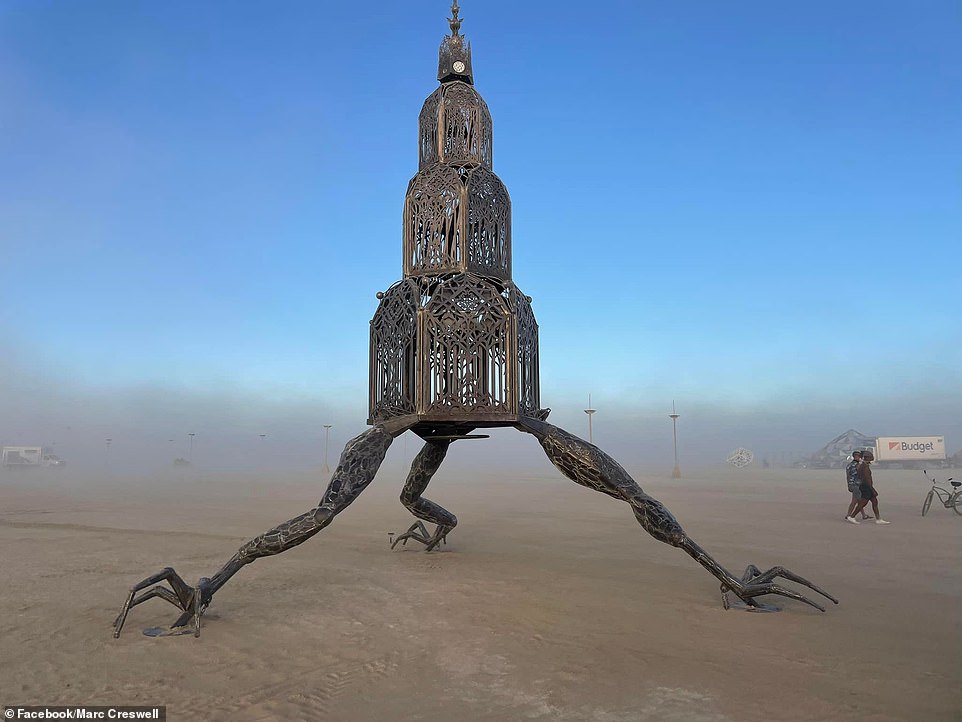 The festival is also known for its art installations. Pictured: A massive cage-like tower on three legs that appear to have claws 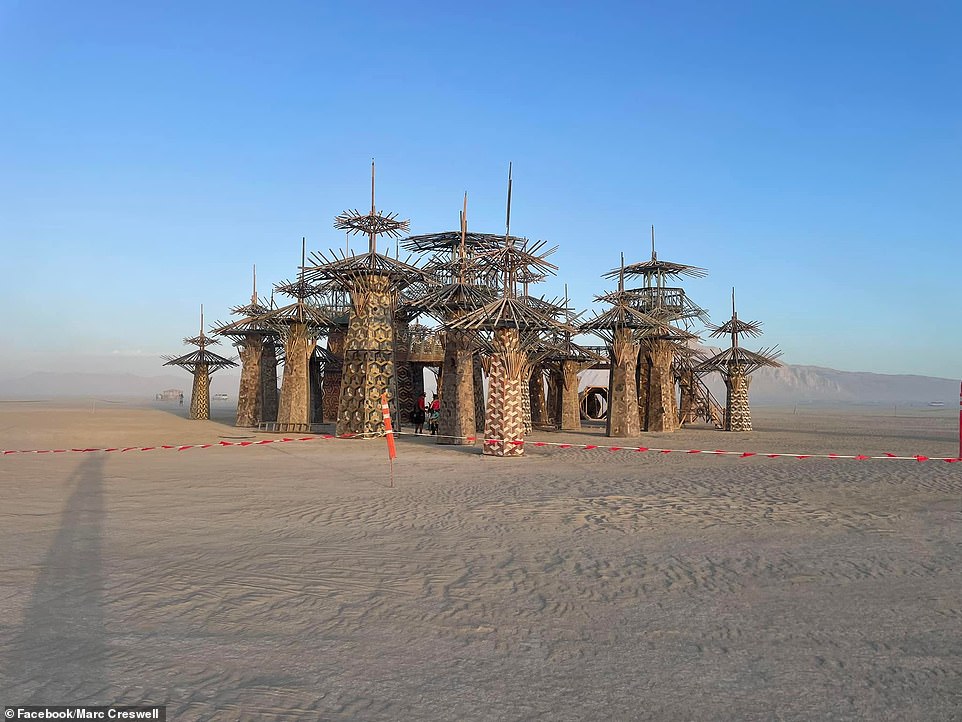 Above features an art installation of in the festival 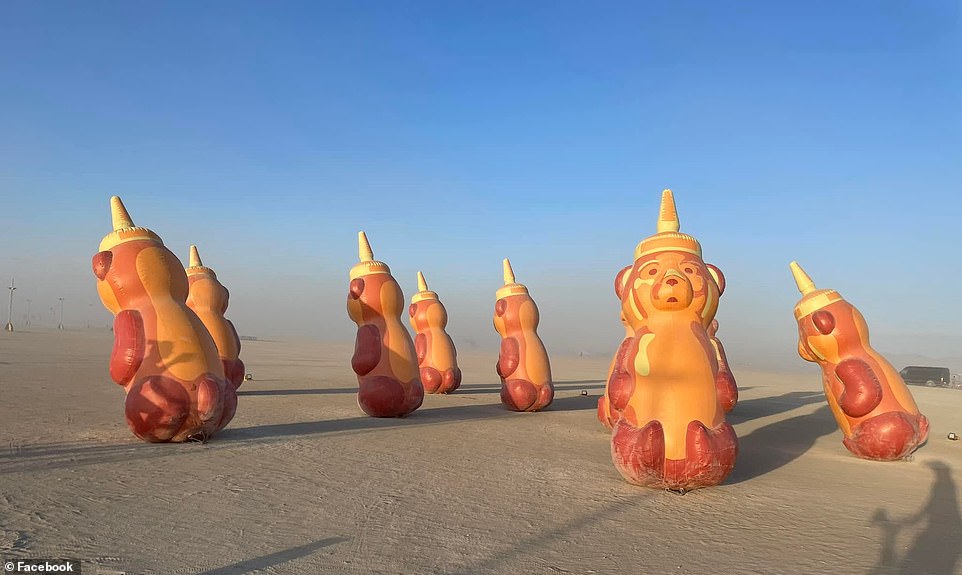 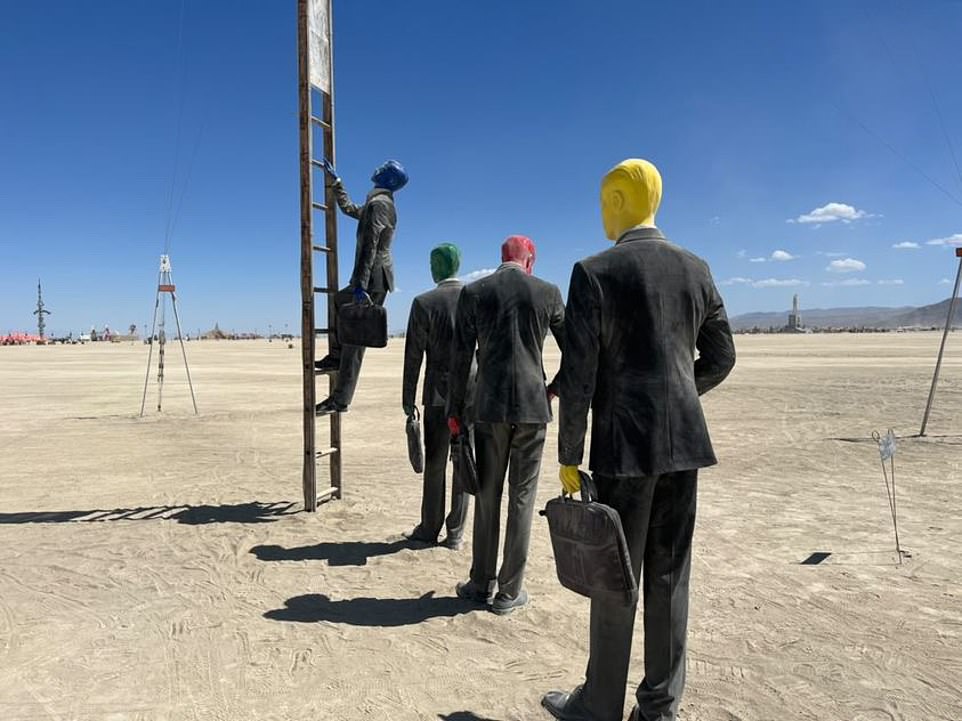