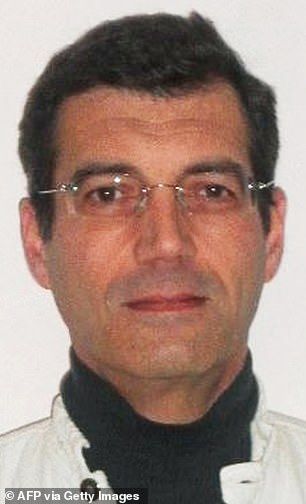 A French man arrested at Glasgow airport is not suspected murderer Xavier Dupont de Ligonnes, according to the results of DNA tests, a source close to the investigation said Saturday.

De Ligonnes was said to have gone ‘on the run’ after the bodies of Agnes, 48, and children Arthur, 20, Tomas, 18, Anne, 16, and Benoit, 13, were found buried in the garden of the family house in Nantes, western France, along with their two pet Labradors.

French judicial sources had said Friday that police at Glasgow airport had arrested Xavier Dupont de Ligonnes, who was subject to an international arrest warrant for the 2011 killings which transfixed France.

But on Saturday, sources close to the probe said a DNA test on the man being held in Scotland was ‘negative’.

The detained man was stopped in Glasgow after arriving on a flight from Paris after an anonymous tip-off, according to French sources close to the investigation.

Police Scotland had issued a statement saying: ‘On Friday the 11th of October a man was arrested at Glasgow Airport and remains in police custody in connection with a European Arrest Warrant issued by the French authorities.

‘Inquiries are ongoing to confirm his identity and we continue to liaise with our colleagues in the relevant agencies.’

French media had earlier on Saturday reported that the man’s finger prints had partially matched those of the alleged assailant.

A female witness involved in the case had told Ouest France (West France) that De Ligonnès managed to start a new life in Scotland.

‘A very reliable source specifies that the fugitive had even remarried in Great Britain,’ the newspaper reported. There was no indication as to whether this information had been passed on to the police, it adds. 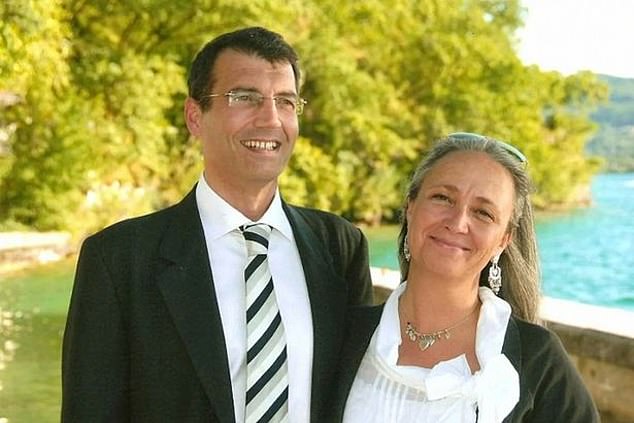 Xavier Dupont de Ligonnes, pictured with wife Agnes, 48, was subject to an international arrest warrant for the 2011 killings in a mystery that transfixed France 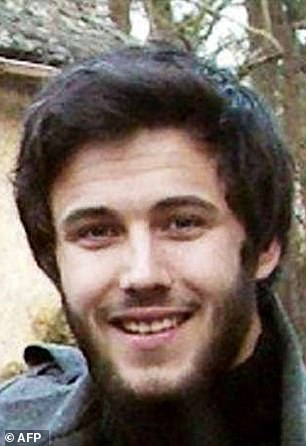 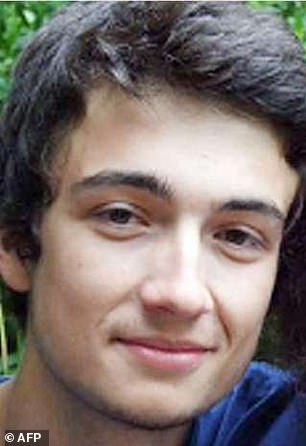 He was said to have gone ‘on the run’ after the bodies of Agnes, 49, and children Arthur (left), 20, Thomas (right), 18, Anne, 16, and Benoit, 13, were found buried in the garden of the family house in Nantes, western France, along with their two pet Labradors 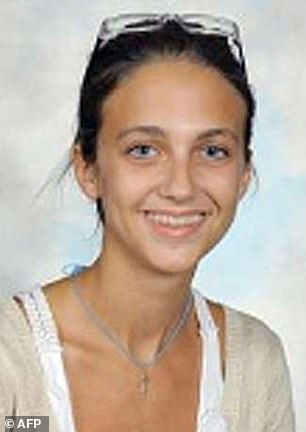 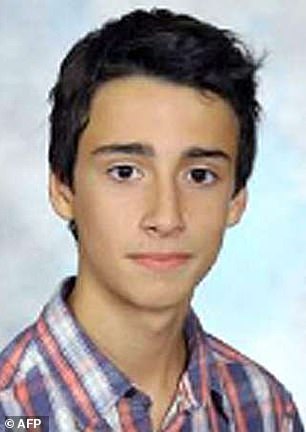 He is suspected of shooting his family dead and burying them under the terrace of their elegant townhouse in the western city of Nantes. Pictured left is Anne, 16. Right: Benoit, 13 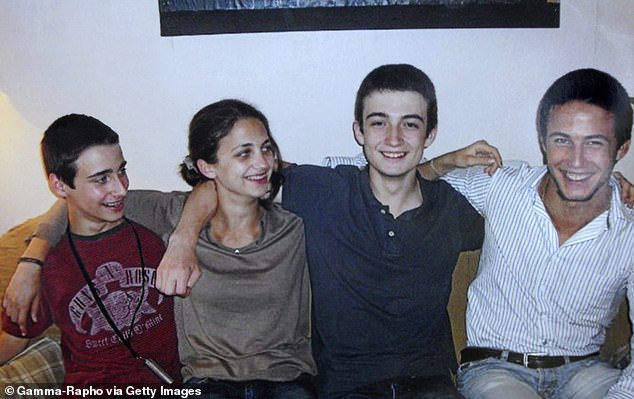 The bodies of Arthur, Thomas, Anne and Benoit (pictured) aged 13 to 20 years were found in the garden of their house on April 21, 2011

He was said to have been using a passport belonging to a man called Guillaume Joao. Mr Joao’s home in Limay, in the Yvelines department, 40 miles from Paris, was raided by police.

‘Mr Joao looks nothing like De Ligonnès, and nor was the man who was arrested in Glasgow,’ said a French investigating source.

‘It may be that De Ligonnès has radically disguised himself over the years, but there are still lots of questions to be answered.

‘The digital fingerprint identification was only partial – that’s why French forensics experts are on their way to Glasgow. DNA tests are already in progress.’

The De Ligonnès suspect has remained silent since his arrest, while Pierre Sennès, the Nantes prosecutor, has called for ‘prudence’. 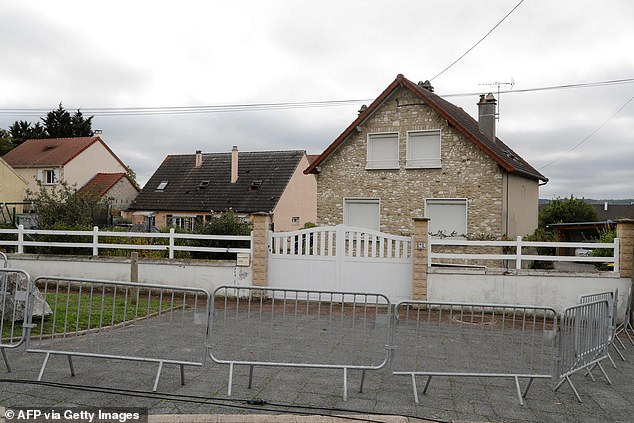 Barriers placed at the front of a house in Limay, north-west of Paris, which is said to be the home of the man arrested late October 11 at Glasgow Airport 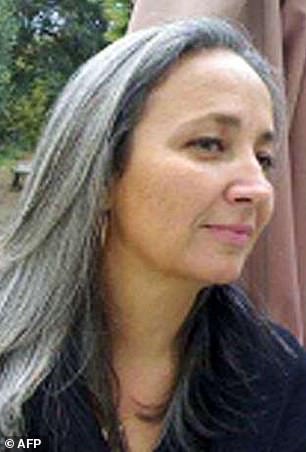 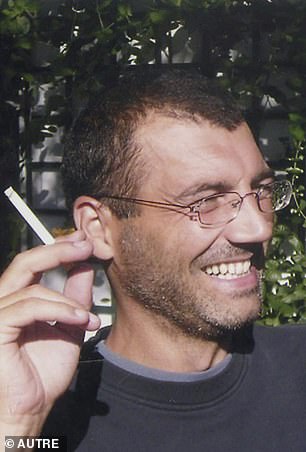 Xavier Dupont de Ligonnes, pictured right in the garden of his Nantes house in August 2003 (left: His wife Agnes) 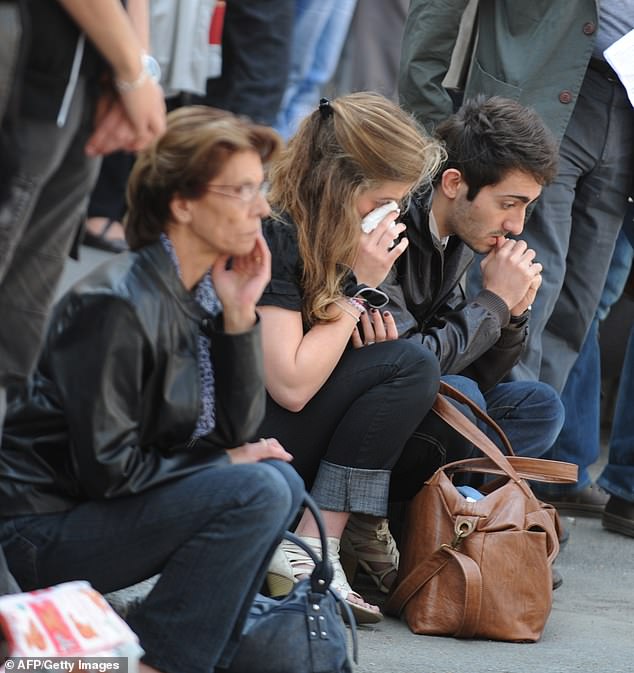 Relatives and friends attend a funeral ceremony outside the church of Saint Felix, in the French western city of Nantes, on April 28, 2011, in memory of the Dupont de Ligonnes family 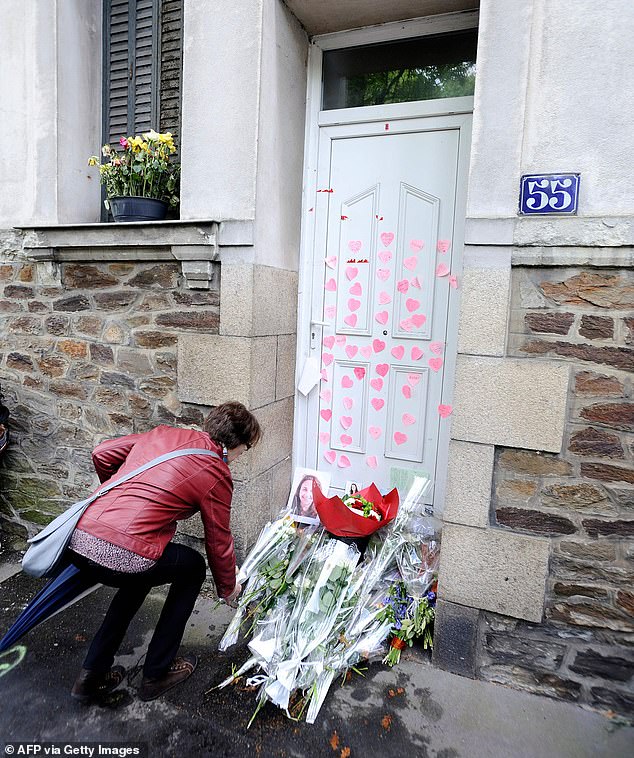 This file photograph taken on April 14, 2012, shows people laying down flowers in front of the Dupont de Ligonnes family’s house as part of a silent march in the streets of Nantes, western France

‘Checks are being carried out to see if it really is Mr De Ligonnès,’ Mr Sennès explained.

Stéphane Goldstein, a lawyer for De Ligonnès’s sister, Christine, who believes he is innocent of the murders, said: ‘We are waiting for scientific confirmation that he is indeed Xavier Dupont de Ligonnès’.

Another investigating source said: ‘He did not try and resist arrest, but information corresponded with what is on a Europol search card. It is now being double checked.’

Two French sources close to the investigation said the aristocratic businessman was said to have been stopped at Glasgow airport on Friday after arriving on a flight from Paris.

The sources confirmed a fingerprint match had been made but one said a DNA analysis was being conducted to be ‘totally sure’ it was him.

Another source said Dupont de Ligonnes was travelling on a stolen French passport and had likely spent part of his time on the run in Britain. 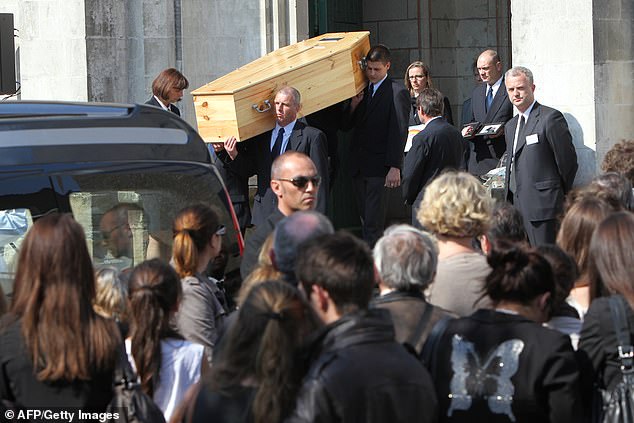 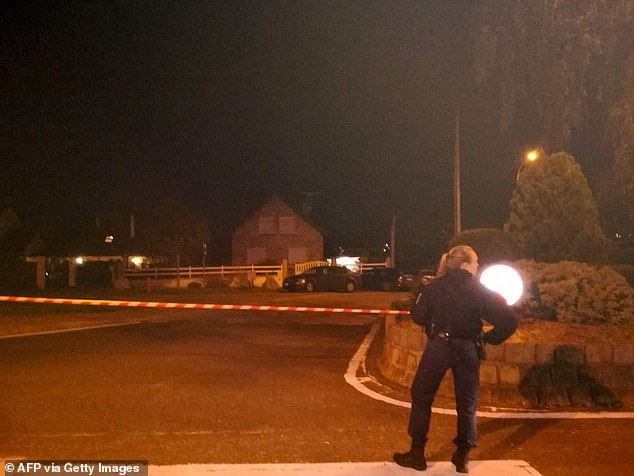 A police officer stands in front of the alleged residence in Limay, Yvelines of Xavier Dupont De Ligonnes on October 12, 2019 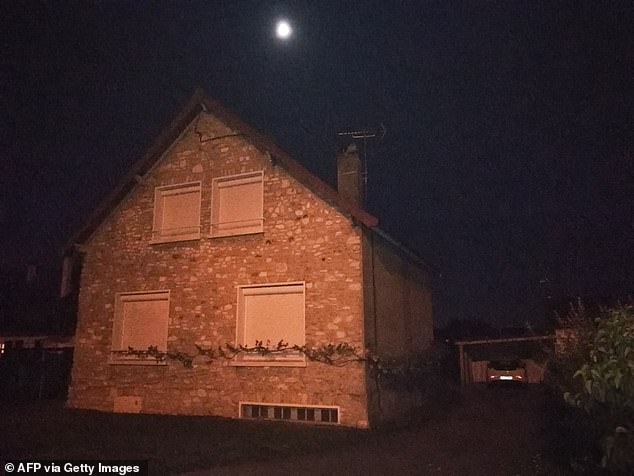 The suspect ‘remains in police custody in connection with a European Arrest Warrant issued by the French Authorities’, a Police Scotland spokeswoman said (pictured: The alleged residence in Limay of Xavier Dupont De Ligonnes)

He is suspected of shooting his family dead and burying them under the terrace of their elegant townhouse in the western city of Nantes.

Their bodies were found three weeks after the killings, during which time Dupont de Ligonnes reportedly told his teenage children’s school he had been transferred to a job in Australia.

He is said to have told friends he was a US secret agent who was being taken into a witness protection programme.

French prosecutors have said he killed all five of his victims in a ‘methodical execution’, shooting them each twice in the head at close range with a weapon fitted with a silencer.

He is believed to have covered them in quicklime and wrapped them in sheets before burying them under concrete.

Earlier on Friday, officers had picked out the suspect at the French capital’s Charles de Gaulle airport, but there was not enough time to seize him, so they alerted British police, who confirmed an arrest had been made.

The man ‘remains in police custody in connection with a European Arrest Warrant issued by the French Authorities’, a Police Scotland spokeswoman said earlier. 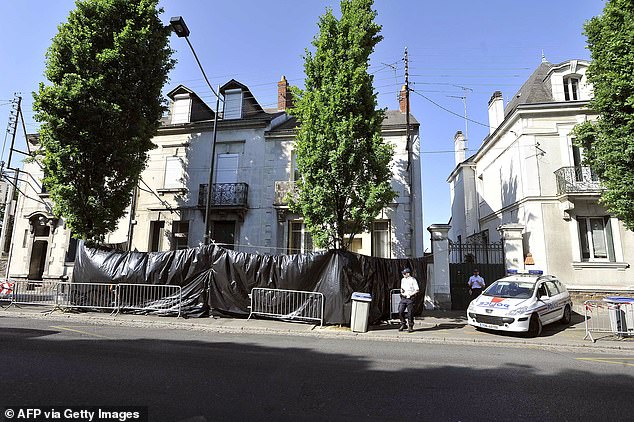 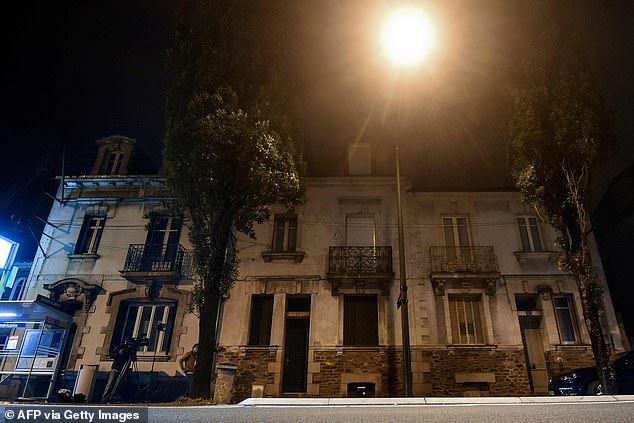 Today: The house where Xavier Dupont De Ligonnes is suspected of having killed his wife and his four children eight years ago

For years France has been gripped by the question of how Dupont de Ligonnes had disappeared without trace, with some suggesting he may have killed himself. Hundreds of reported sightings only added to the mystery.

In 2015, a letter and photo of two of his sons, signed with his name and the message ‘I am still alive’, was delivered to an AFP journalist but experts could not verify its authenticity.

The alleged killer evaded a police dragnet in the Var region of southern France in January last year after witnesses reported seeing a man resembling him near a monastery. 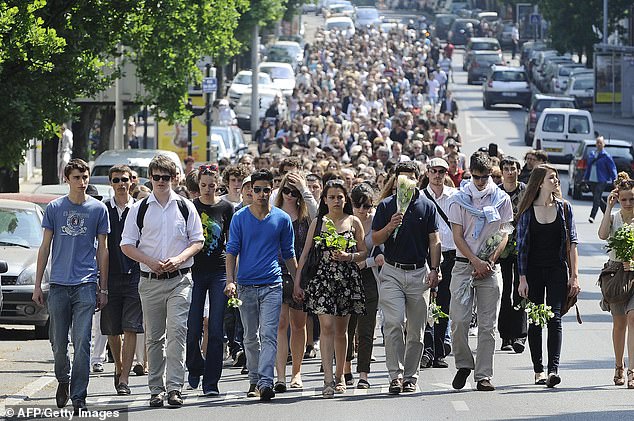 Hundreds of people take part in a march on April 26, 2011 in the French western city of Nantes, in memory of the five Dupont de Ligonnes family 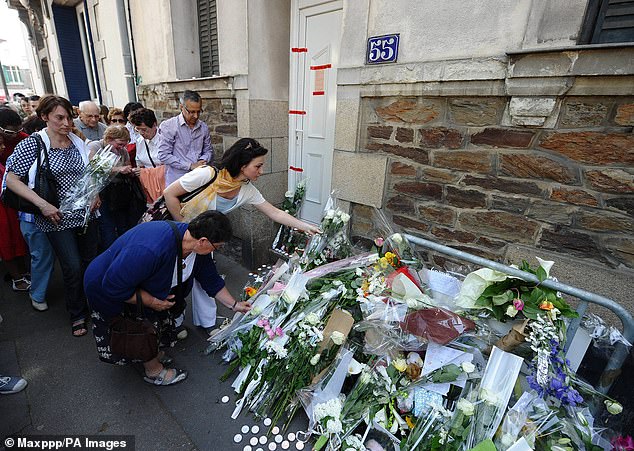 The alleged killer evaded a police dragnet in the Var region of southern France in January last year after witnesses reported seeing a man resembling him near a monastery (pictured: Nantes, April 2011) 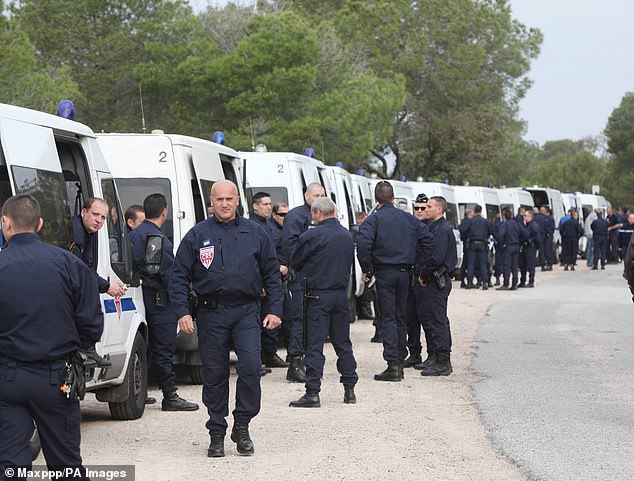 Europol is the European Union Agency for Law Enforcement Cooperation which has helped in the eight-year hunt for De Ligonnès (pictured: Police hunt De Ligonnès in the south of France)

Yesterday evening French media outlets reported that De Ligonnès had been arrested at Glasgow Airport following a flight from Paris.

‘He was travelling under a false identify and had changed his appearance completely,’ said an investigating source. 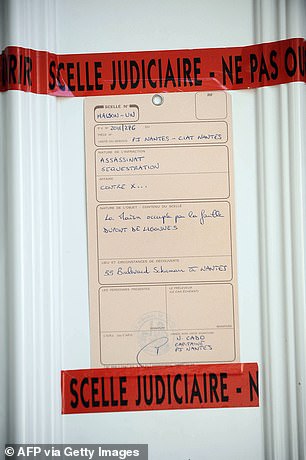 This file photograph taken on April 23, 2011, shows a police seal on the front door of Dupont de Ligonnes’ family home in western French city of Nantes

‘He did not try and resist arrest, but information corresponded with what is on a Europol search card. It is now being double checked. He is now in the hands of Scottish police.’

Europol is the European Union Agency for Law Enforcement Cooperation which has helped in the eight-year hunt for De Ligonnès.

Last year police searched underground caves and abandoned potassium mines in the area around Roquebrune-sur-Argens, in the south of France, where De Ligonnès was spotted by a CCTV camera in April 2011.

He had fled Nantes a few days earlier after neighbours reported not having seen any of the family for more than three weeks.

Detectives who visited initially found a severed leg under the garden terrace, and then uncovered the bodies of those who had been killed.

De Ligonnès originally came from Versailles, home of the pre-Revolutionary kings and queens of France, and was technically a count who could trace his lineage back generations. 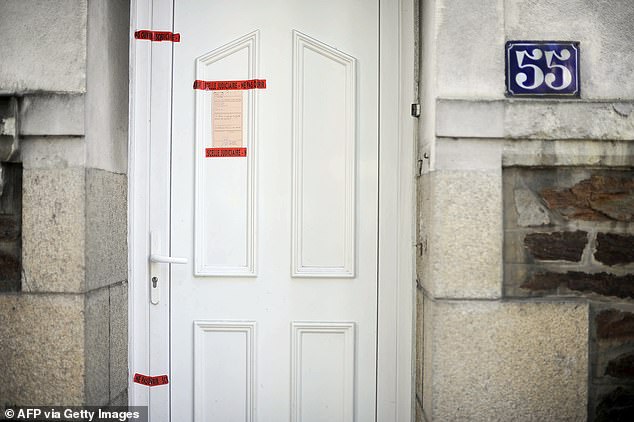 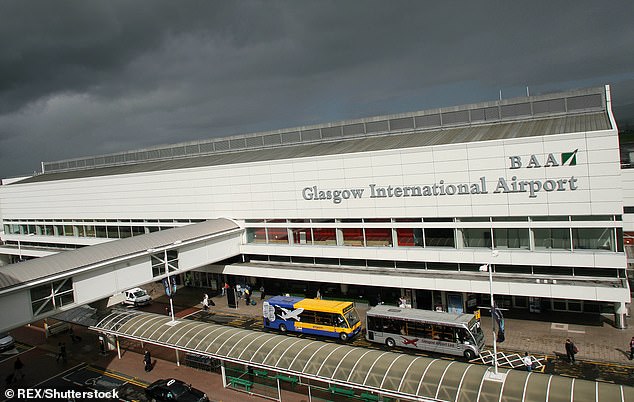 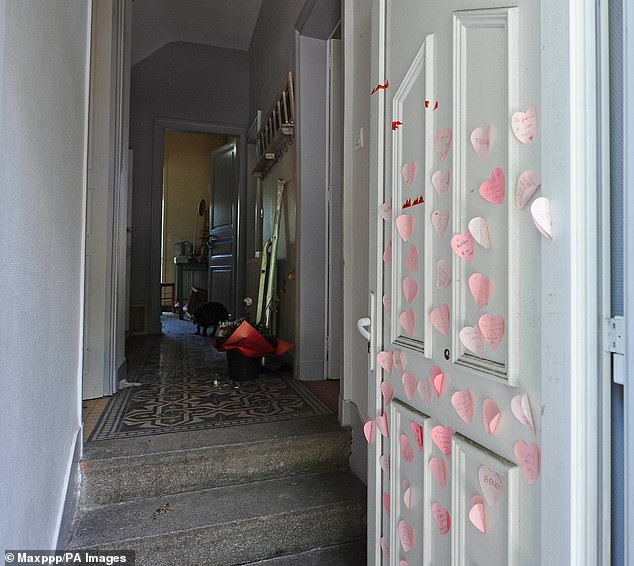 In confiscated emails he said that he considered himself to be part of a Roman Catholic elite which was superior to ‘the masses’.

‘I think I’ve got a superiority complex, you could call it that,’ he wrote. ‘But it’s based on a simple observation: I belong to a group of people who are intelligent, determined, balanced and in good moral and physical health. Such people are rare compared to the masses.’

Recalling his strict, devout childhood, De Ligonnès added: ‘All my adolescence was devoted to religion and faith, under the influence of my grand-mother and mother. To such an extent that I did not rebel like other adolescents, nor indulge in drugs or run after girls.’

De Ligonnès was last seen on April 15 2011 when he left a budget hotel at Roquebrune-sur-Argens, abandoning his car there.

He was wearing a backpack as he strolled through a car park into the surrounding countryside, and was picked up by a camera.

An extensive search was carried out in the area between April and June 2011 and – acting on new information – police resumed it last year, but found nothing. 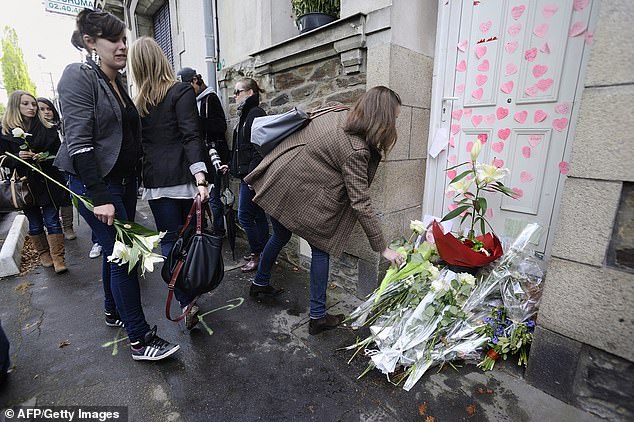 People lay down flowers in front of the Dupont de Ligonnes family’s house as part of a silent march on April 14, 2012 in the streets of Nantes, western France 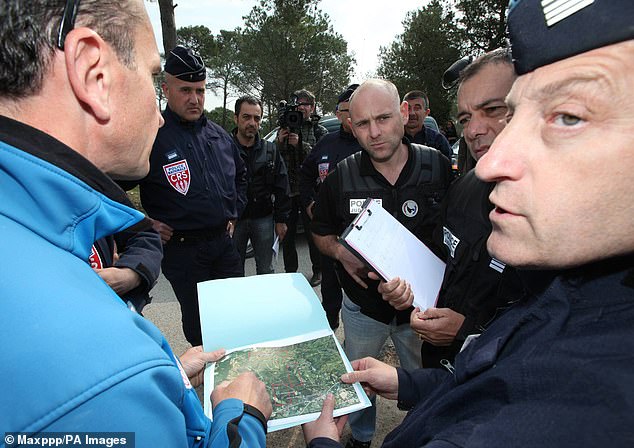 French authorities have been searching for Dupont de Ligonnès without success ever since the bodies of his wife, Agnes, and four children – Arthur, Thomas, Anne and Benoit – were discovered (pictured: French police hunting de Ligonnès in April 2011)

There was a theory that De Ligonnès may have committed suicide in the days after the slaughter, in which case police were searching for remains of his body.

However, prosecutors had never ruled out the possibility that De Ligonnès was living rough, or else is being hidden by members of his extended family, who own country homes around France.

Five months before the murders, De Ligonnès said he had inherited a .22 rifle from his father and started target practice at a Nantes shooting club.

Receipts found in his house also reveal that he bought a silencer, as well as a spade, a two-wheel trolley, chalk lime, and other equipment which could have been used to bury the bodies.

It also emerged that De Ligonnès, who ran a number of internet businesses, had severe financial difficulties.

According to Scottish police the arrested man’s ‘digital fingerprints’ correspond to that those recorded for De Ligonnès, French media reported.

Powerball ticket worth $1 million is sold in Brooklyn