Police have released CCTV footage of a person fleeing a home shortly after it became engulfed in 20-metre high flames, as detectives continue their investigation into a fire that destroyed a $24 million heritage-listed mansion in Sydney’s lower north shore earlier this month.

Emergency services were called to the waterfront home on Cliff Road in Northwood – which boasts spectacular views, a tennis court and a boathouse – following reports of a major house fire on Saturday, September 3.

About 50 firefighters worked to extinguish the blaze over two hours, but the house suffered significant damage. NSW Fire and Rescue said about 30 calls were made to triple zero.

No one was home at the time and no injuries were reported.

An investigation by detectives determined the fire was deliberately lit. 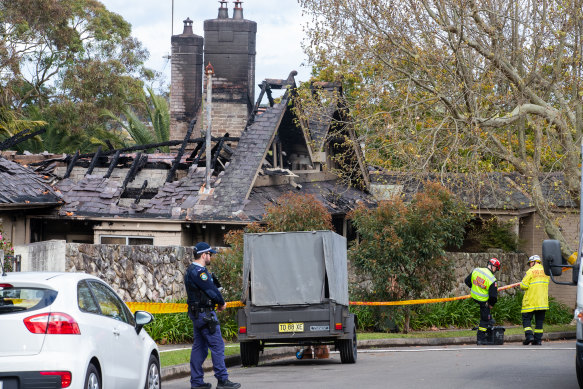 The Cliff Road home in Northwood was gutted by fire.Credit:Edwina Pickles

As part of police inquiries, detectives are now appealing for public assistance to identify a person dressed in dark clothing who can be seen in CCTV footage outside the home before and after the fire was lit.

In the video, the person can be seen walking from the road into a property before later fleeing just after 10.30pm as the house becomes alight.

Detectives are also urging anyone who may have any dashcam footage from vehicles driving along or parked on Cliff Road on September 3 to contact police.

“It was a huge firestorm,” he said.

The home is one of the oldest in Northwood and was originally built in 1915.

It was previously owned by the late travel industry doyenne Mary Rossi, which she and her late husband Theo Rossi purchased for £16,500 in 1961.

Claudia Rossi Hudson, one of the 10 children raised in the home by Mary Rossi and her late husband Theo Rossi, said the family had been shocked by the fire.

“The loss was really when we sold the family home last year, but at the time we thought we’d always be able to drive by and remember what a joyous and happy life we had in that house,” she said.

A few months before the Rossi family sold, Chen lodged a development application with Lane Cove Council to demolish his house and rebuild a contemporary, four-storey residence with a swimming pool at a cost of more than $5 million.

That DA was knocked back in October in a nine-page document that included issues with the bulk and scale of the project, as well as having “an unacceptable impact on the heritage” house next door.

There were 10 objections lodged to the DA.

In July, Chen lodged a review of the rejection.

There is no suggestion the DA rejection is related to the fire. Police have not confirmed any subject of their investigation.