Washington: More than 200 Chinese ships have been spotted near the Philippine-occupied Thitu Island in the South China Sea since the start of the year, triggering a diplomatic protest from the Philippines. 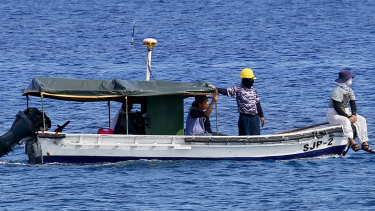 Engineers from the Philippine Government survey the area around the Philippine-claimed Thitu Island with a sandbar sitting on the horizon off the disputed South China Sea in the western Philippines. Credit:AP

The fishing vessels stationed near the disputed island are likely part of China's sea militia, Philippine President Rodrigo Duterte's spokesman Salvador Panelo said at a briefing on Monday, citing information from the military.

He said he was set to meet China's ambassador to the Southeast Asian nation and ask about the bolstered Chinese presence in the area, after the Philippine Foreign Affairs Department issued a protest.

He urged a panel with representatives from both nations tasked with resolving South China Sea disputes to address Chinese presence in the area.

"This is a concern not only for the military, but for other agencies as well, including the Coast Guard. We are looking for ways to address this," Madrigal told reporters on the sidelines of opening ceremonies for annual joint military drills between the Philippines and the US.

Thitu Island, which Manila calls "Pag-asa," is part of the disputed Spratly Islands, a series of reefs and shoals in the South China Sea.

Manila last year started building a ramp on the island and plans to extend a runway there. The area, which lies 480 kilometres (300 miles) west of the Philippines' Palawan province, is also claimed by Taiwan and Vietnam.

China claims over 80 per cent of the sea, through which vast amounts of trade passes — and which is estimated to hold billions of dollars worth of gas reserves.

More than 7000 soldiers from the Philippines and the US are participating in this year's military drills, Madrigal said, which have continued to take place despite Duterte's 2016 call to split with his biggest military ally. A small delegation from Australia's armed forces is also joining this year's military exercises.