Plane crash has left me an inch SHORTER: Pilot has miracle escape from aircraft that hit tree at 130mph… then discovers injuries have reduced his height 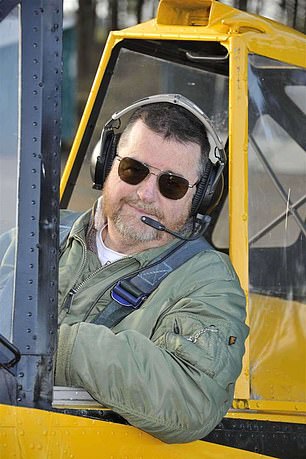 A pilot has described his brush with death after a vintage aircraft crash-landed and slammed into a tree at 130mph, leaving him nearly an inch shorter.

Dave Unwin was in the cockpit of a 1951 Hawker Sea Fury with co-pilot Eskil Amdal when disaster struck on Tuesday last week.

They had been performing a series of loops and turns at 5,000ft for a magazine feature when the engine cut out, leaving them plummeting towards the ground.

Mr Amdal took control while Mr Unwin searched for a field to land.

With no landing gear down, the multi-million pound aircraft – named Invincible – hit the ground at 150mph and skidded across a field before hitting a tree.

Both men walked away with no major injuries. Mr Unwin, 59, who has been flying for 35 years, said: ‘We should be dead. There’s no doubt in my mind, knowing what I do about flying.’

The father-of-two from Grimsthorpe, Lincolnshire, was treated for a broken rib, cuts and bruises and three spinal fractures caused by compression injuries – which have left him 2cm shorter.

The mid-air drama happened when the pair took off from the Imperial War Museum in Duxford, Cambridgeshire.

They had gone flying to write test reviews for Pilot Magazine but the aircraft’s oil gauge needles suddenly registered in the red and the engine stopped.

They then plummeted at 150mph.

Mr Unwin said: ‘Luckily for me, Eskil is a really good pilot and had the nerve and courage to bring us down.

‘When we got near the ground he levelled off. It sort of skipped and skidded and then we hit a tree that tore the left wing off.

‘We probably went from 130mph to nothing when we hit the tree.’

Both were taken to Addenbrooke’s Hospital in Cambridge and have since been released.

The accident happened a month after Mr Unwin was flying a de Havilland Chipmunk above Lincolnshire to pay tribute to the NHS.

He said: ‘It’s ironic that having applauded the NHS I really needed it a couple of weeks later.’

His wife Lizzie said: ‘It’s terrifying but I would never ask Dave to stop flying because he loves it so much.’

An investigation is under way to determine what caused the fault but it is hoped Invincible will be restored to take to the skies again.

Swami Agnivesh, Crusader Against Labor Abuses in India, Dies at 81
We and our partners use cookies on this site to improve our service, perform analytics, personalize advertising, measure advertising performance, and remember website preferences.Ok