A new police taskforce investigating former soldier Ben Roberts-Smith has uncovered scraps of paper with the hand-written names and addresses of SAS soldiers, created as part of an alleged plot to threaten witnesses to a war crimes inquiry.

The discovery of the scraps of paper, along with witness testimony alleging that Mr Roberts-Smith was behind the 2018 plot to intimidate witnesses, is the biggest breakthrough yet for the recently launched Australian Federal Police taskforce as it investigates the former soldier for serious criminal offences. 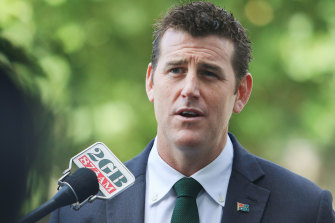 Former soldier Ben Roberts-Smith has denied any involvement in the intimidation plot.Credit:Cole Bennetts

If it was proven that Mr Roberts-Smith had sought to threaten any of his fellow Special Air Service Regiment soldiers to stop them testifying at the Brereton inquiry into alleged war crimes, he could face up to five years in jail.

The former soldier has denied any involvement in the intimidation plot and is suing The Age and The Sydney Morning Herald over reports detailing his alleged involvement in war crimes, bullying and assaulting a woman.

In late April, AFP Deputy Commissioner Ian McCartney told a parliamentary estimates committee that the federal police had in late March launched a new “priority” investigation into Mr Roberts-Smith and that the witness intimidation allegations were being treated “seriously”.

Mr McCartney refused to provide the committee with further details and the AFP has declined to respond to inquiries, citing ongoing investigations. But multiple sources with knowledge of the investigation, who were not authorised to speak publicly, said the handwritten scraps of paper contained the names of two SAS soldiers who had served with Mr Roberts-Smith in Afghanistan.

Both SAS veterans hold adverse information about the decorated former soldier and both men were ordered to appear before the Brereton inquiry, a major probe into alleged war crimes run between 2016 and 2020 by the military Inspector-General and overseen by senior judge Paul Brereton.

Two of the envelopes were sent to one of the witnesses via a post office servicing the elite SAS headquarters in Perth. They were seized by the AFP in June 2018. The remaining envelopes were never sent. They were recovered by police in March 2020.

In 2018, the then chief of the defence force, Mark Binskin, described the sending of the anonymous letters as a disgraceful criminal act aimed at scaring witnesses from testifying before the Brereton inquiry. He said defence had called the AFP in to urgently investigate, although the original police inquiry stalled until the recent discovery of the handwritten notes.

That discovery triggered AFP Commissioner Reece Kershaw to launch a new police taskforce. The AFP taskforce is operating in Brisbane and is the third investigating Mr Roberts-Smith. 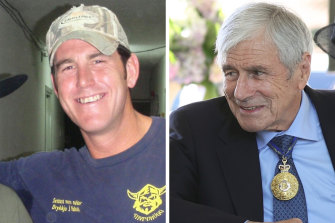 Three weeks after Mr McCartney confirmed the investigation, a key police witness had false information about him published by Sydney’s Daily Telegraph newspaper, which incorrectly reported that the witness had been party to the covert recording of Mr Roberts-Smith as he denigrated senior executives and staff at SevenWestMedia. The media company employs Mr Roberts-Smith and previously funded his war crimes inquiry defence.

The Daily Telegraph also falsely reported that the witness had worked as a fixer for 60 Minutes, which has reported extensively about Mr Roberts-Smith.

In June 2018, the AFP launched investigations into Mr Roberts-Smith in connection to allegations he was implicated in the unlawful execution of prisoners in Afghanistan in 2009 and 2012.

Both taskforces have submitted briefs of evidence to the Commonwealth Director of Public Prosecutions that name Mr Roberts-Smith and at least two other SAS soldiers over their alleged involvement in war crimes. Those briefs have been referred to an external counsel, leading barrister David McLure, SC, who is advising the CDPP on whether the evidence is strong enough to warrant a criminal prosecution.

The decision by prosecutors about whether to prosecute Mr Roberts-Smith or any other SAS soldiers for allegedly committing war crimes has been delayed because of the creation by Prime Minister Scott Morrison of the Office of the Special Investigator in January.

The OSI is headed by former senior judge Mark Weinberg and is assigned the task of identifying the evidence previously gathered by the Brereton inquiry that can be lawfully handed to detectives seeking to charge suspected war criminals.

The Brereton inquiry referred multiple SAS soldiers to the AFP over the alleged unlawful execution of up to 39 Afghans. But while much of the sworn testimony it obtained can be referred to police, significant tranches of inquiry evidence must be withheld from investigators because it was gathered under laws which prevent soldiers’ own evidence being used to prosecute them.

Justice Weinberg in February hired senior barristers to comb through the testimony and provide advice about what can be quarantined or released. A senior legal figure aware of this process described it as challenging given uncertainties in the law and the prospect that the mistaken release of testimony to detectives could undermine future prosecutions.

The AFP taskforce investigating Mr Roberts-Smith for witness intimidation is not relying on evidence gathered by the Brereton inquiry and is operating separately from the OSI and the two other federal police taskforces.

Our Morning Edition newsletter is a curated guide to the most important and interesting stories, analysis and insights. Sign up to The Sydney Morning Herald’s newsletter here, The Age’s here, Brisbane Times’ here, and WAtoday’s here.

Is there a connection between fugitive Brandon Teixeira and murdered Surrey man Ryan Provencher?