REVEALED: Police seized shotgun from Marines chief days before tragedy with questions raised over missed ‘red flag’ as it emerges officers found firearm at his home before he died

Armed police seized a shotgun from the family home of a Royal Marines general just days before he was found hanged.

A response team recovered the weapon on September 22 after a relative raised concerns for Major General Matthew Holmes’ welfare.

Tragically, officers returned to the property on October 2, hours after the 54-year-old former Commandant General was found dead.

The recovery of the weapon so near to his death should have been a ‘red flag’ and triggered an intervention by mental health experts, it was claimed last night. 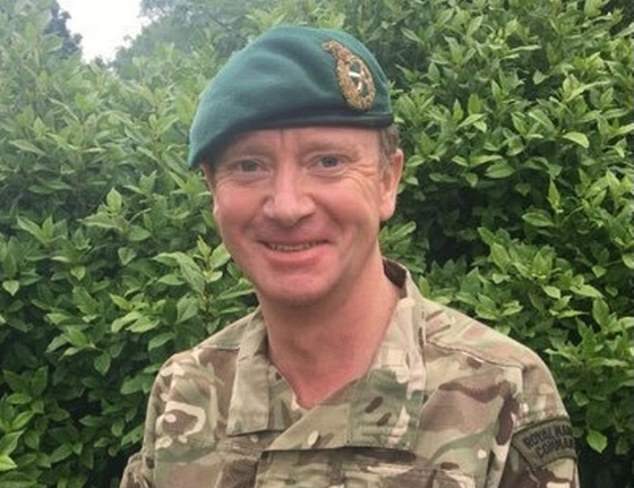 In the last months of his life Maj Gen Holmes felt undermined by the head of the Royal Navy, Admiral Sir Tony Radakin, 55, who has been appointed to lead the UK’s Armed Forces.

Sir Tony joined mourners at his funeral in Winchester Cathedral in Hampshire.

Maj Gen Holmes’ widow Lea Holmes was accompanied by their children Eleanor, 15 and William, 11. They held hands as they walked into the cathedral.

The funeral was attended by more than 700 mourners and members of the public gathered outside to pay their respects. 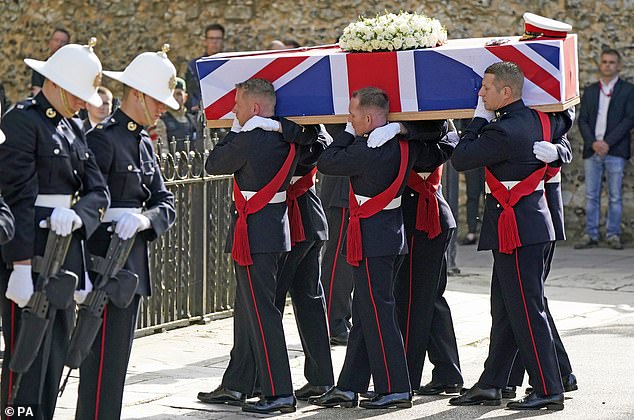 Tragically, officers returned to the property on October 2, hours after the 54-year-old former Commandant General was found dead

Every unit of the Royal Marines was represented, as was the United States Marine Corps. The Royal Marines band played before the coffin was driven to the cathedral, awaited by Dean of Winchester Catherine Ogle, who led the service.

The coffin was carried by pallbearers who all had a close connection to Maj Gen Holmes.

He had the same duty at the funeral of Prince Philip, the Corps’ honorary Captain General for several decades, at Windsor Castle in April.

Sir Tony had slapped a gagging order on Maj Gen Holmes when he challenged his plans to modernise the Royal Marines, it emerged last week.

Maj Gen Holmes then told friends: ‘I don’t trust Radakin. He doesn’t get the Corps. You should see the emails from Radakin, imposing his authority and keeping me constrained. I feel beaten down, not listened to, merely run over by someone with no military judgment. It’s been awful. Awful.’ 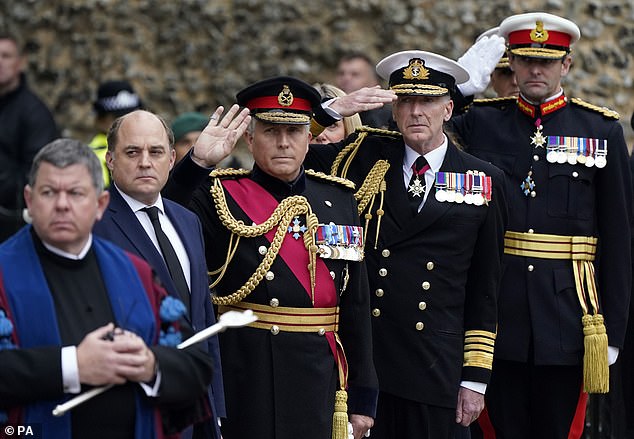 The seized shotgun is understood to have been licensed to the Major General. The police visit emerged at a pre-inquest hearing this week.

The court heard he killed himself over concerns about his career and marriage. Hampshire Police confirmed the firearm’s recovery. No arrests were made and Maj Gen Holmes had not threatened anyone else.

The highly decorated officer is also said to have behaved erratically at a formal dinner at the Commando Training Centre Royal Marines at Lympstone, Devon.

Philip Ingram, an intelligence specialist and defence welfare campaigner, said: ‘While you cannot order someone to seek help you can put a protective bubble around them. He had been displaying cries for help for some time.

‘The coming together of his professional and personal woes was a perfect storm and should have been obvious to his chain of command.’

But retired Rear Admiral Chris Parry last night insisted everything had been done to protect the officer. He said: ‘My understanding is that the whole top echelon of the Royal Navy, especially the First Sea Lord [Sir Tony], the Commandant General [Lt Gen Rob Magowan] and [Vice Admiral Jerry Kyd] were in close and frequent personal contact with him during his final week to encourage and support him.’

Last night, the Royal Navy said: ‘Our condolences, prayers and deepest sympathy are with Matt’s family. Their loss is the greatest and most painful: the entire naval service will be there for them now and always.’

A full hearing will take place on February 10.

For confidential support, call Samaritans on 116 123 or go to www.samaritans.org