A police officer told a sex abuse victim they would ‘come for his friends and family’ if he pursued complaints against the town’s paedophile mayor, it has been claimed.

The threat – allegedly made by an officer in Tiverton, Devon – was made against a man, who said he had been abused aged 14 by local politician John Humphreys.

Humphreys, 59, a former Conservative councillor and mayor of Exmouth, is currently serving 21 years in prison for sexual assaulting two boys.

Today Devon and Cornwall Police said it would be contacting victims with a view to an official complaint being lodged.

If that happens force watchdog the IOPC could step in as well – after the leader of East Devon District Council urged it be referred.

Details of the alleged threat – made in a letter read out in full at a council meeting – has led a victim to raise concerns over whether there was a conspiracy to cover-up the abuse. 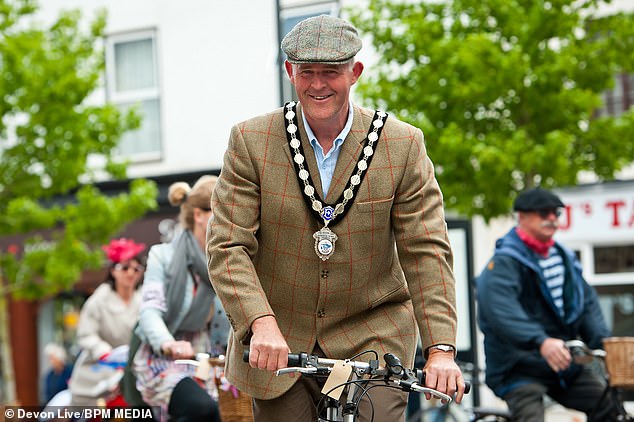 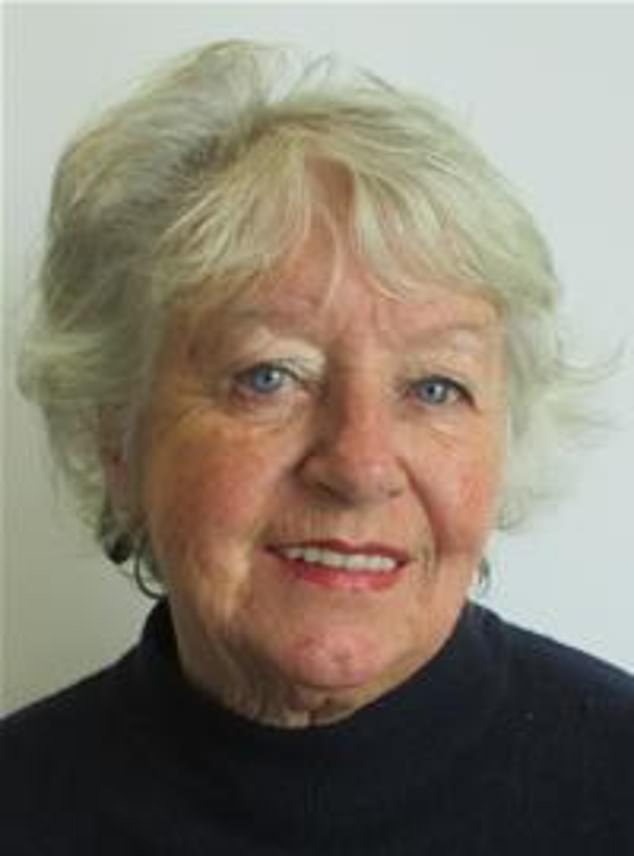 The letter from one of the victim’s was written to Councillor Eileen Wragg, who read it aloud 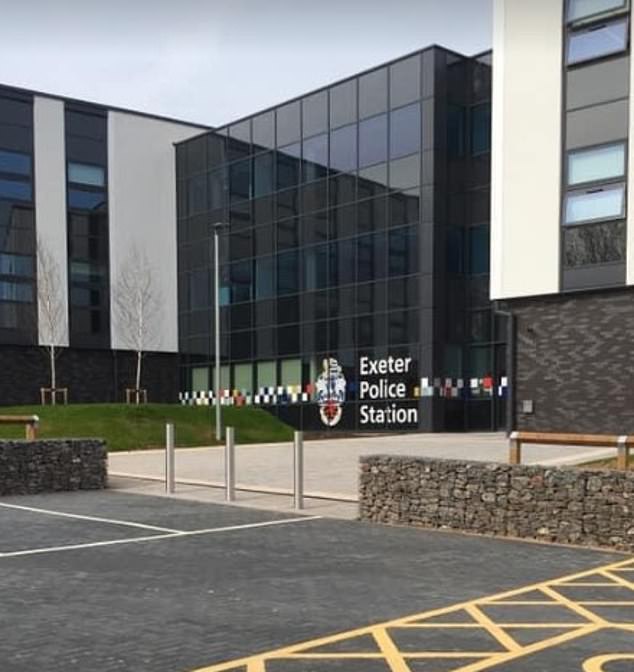 The victim first reported Humphreys in 2004 but was ignored, then in 2012 made the complaint, which prompted the threat from the unnamed officer.

It was only in 2015 when a further victim came forward that the case was finally probed properly.

Humphreys was jailed in August for the string of sex offences against two schoolboys.

The letter from one of the victim’s was written to Councillor Eileen Wragg, who read it aloud to councillors. 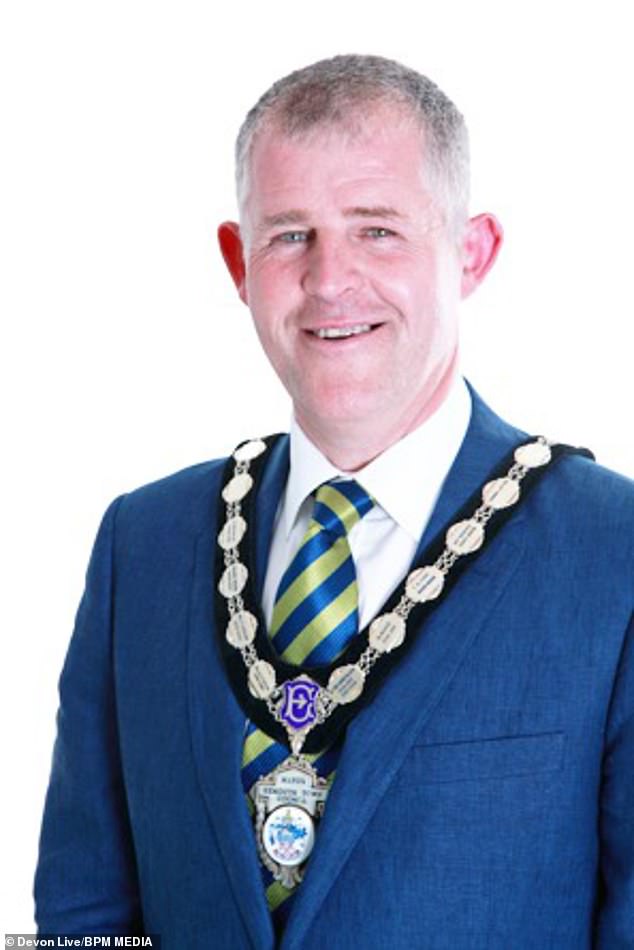 ‘I am one of many victims of John Humphrey’s crimes and I want members and officers of this council and the public to hear of what I have had to endure for the last 22 years. I was sent as a 14-year-old from my school on work experience to Humphrey’s gardening business. I was a very innocent 14-year-old and did not know what to do about his assaults on me until I finally told my mother in 2004. She took me to Exmouth police station where I made a full, signed statement – then I heard nothing at all, except I was regularly harassed by local police officers afterwards.

‘In 2005 they just said that the case had been dropped. I did my best to get on with my life and worked hard asa self-employed builder but the hurt inside me was always there. Then in 2011 and 2012 the Jimmie Saville case was reported. Also, I met my partner and when we found out she was pregnant I thought ‘let’s do something about it now I’m bringing a child into the world. I rang up to the case reopened again in 2012. All I got was a threatening phone call from a Tiverton officer. His near exact words were ‘Humphreys is now mayor. He’s getting on with his life. If you do anything or proceed with this in court we will come for your friends and family.’

‘I made an official complaint about the threats and was asked into Sidmouth Police Station. They said an apology will be read out. It was hand written and wasn’t even an apology. I wasn’t given anything in writing that I could take away. When Humphreys’ case came to court this year, not being able to talk about how the police had treated me was my biggest concern. ‘Don’t open this can of worms right now’ was all that was said to me. I just felt like blurting it out, stood in the [witness] box, once all the lies were being thrown at me.

‘In 2015, after many more years of mental stress, a knock came on the door of my mum’s house. It was a female police officer. Someone else had come forward. I couldn’t believe it. I’d not been believed twice – but the other victim was a lot older than me and maybe more credible, and there was a third and fourth victim, too. But it still took another six years for justice to be done.

‘Humphreys was originally arrested on the 11 May 2016. On the 24 January 2017 a file was handed to the Crown Prosecution Service. It took them a long time to deal with this and the case came to court in August 2021. The police say that Humphreys knew that the case was live during this time, 2016 to 2021. His [Humphreys’] legal team communicated with the officer in charge and at no time was he told that the case was not being proceeded with. This leaves me wondering ‘who else knew and how was he allowed to carry on as usual being a councillor at Exmouth and East Devon?’

‘When he was convicted Humphreys’ sentence was set by the judge to 21 years, meaning he must serve at least two-thirds – 14 years. He will remain on the sex offenders register indefinitely. I have been told that this is one of the longest sentences ever passed for crimes of this sort.

‘I consider that part of my healing from all of this started when I walked into the witnesses box and say what I needed and finally be heard. I insisted they took away the screens so I could look him in the eye. It has helped me with my psychological fear of him as I have always viewed him as a man with influence and standing in the community. I still feel that Humphreys has been favoured because of his connections, his apparent good character and social standing as a councillor. I think he sat as a representative on the Devon and Cornwall Police Scrutiny Committee and he obviously knew all the top people in the Conservatives and the Masons.

‘In my mind he has been a monster to me. He took away my teenage years and this has gone into my adulthood. I should have retained that innocence – but that choice was taken away from me by this man.

‘There are still so many questions to be answered. After the verdict I was still ignored. I’d like to be heard. It is important to me that the council hears me, hears my statement. What difference it makes I don’t know. Maybe a few people will be sat there worried. It will be nice to be heard.’

It said: ‘I rang up to the case reopened again in 2012. All I got was a threatening phone call from a Tiverton officer.

‘His near exact words were ‘Humphreys is now mayor. He’s getting on with his life.

‘If you do anything or proceed with this in court we will come for your friends and family’.

‘When Humphreys’ case came to court this year, not being able to talk about how the police had treated me was my biggest concern.

‘Don’t open this can of worms right now was all that was said to me.

‘I just felt like blurting it out, stood in the box, once all the lies were being thrown at me.’

Leader of the council Paul Arnott described the victim as ‘one of the bravest people who has ever lived in East Devon.’

He added: ‘I think that’s really important. Not only has he seen this through to a prosecution, he has brought forward this statement tonight through Councillor Wragg.’

He asked at full council if any members were aware that Humphreys was under investigation.

The letter, reported by Radio Exe,  came months after the sex offender mayor was jailed.

He sexually assaulted one boy aged 12 to 13 between 1990 and 1991, and a separate victim in the late 1990s who was aged 14 to 15. Both victims reported the incidents separately almost a decade apart.

Jill Macnamara of CPS said at the time: ‘This case demonstrates we do not hesitate to prosecute perpetrators of sexual abuse where there is sufficient evidence regardless of how long ago the crimes were committed.

‘It takes courage to come forward as an adult to report what happened to you as child especially where the offender has held a position of power within the local community.

‘The victims have shown a great deal of strength and bravery to step forward to report the incident and support the prosecution and I would like to thank them for their resilience.’

Police Sergeant Angela Galasso of Devon and Cornwall Police said: ‘This has been a long and protracted investigation involving historic sexual offences that occurred more 25 years ago during the early and late 1990s.

‘The sentencing today shows that nobody is above the law, regardless of their standing in the community.

‘I can only thank the complainants in this case for their tenacity, patience and the trust that they have continued to place in myself and colleagues investigating these matters.

‘Both victims have voiced separately that they feared they would never be believed or that their complaints would be taken seriously.

‘I sincerely hope that this guilty verdict will now provide this validation and allow them to feel that they can move on with their lives.’

Today after being asked by MailOnline about the victim’s letter it released another response.

A spokesman from Devon and Cornwall Police said: ‘We are aware of an East Devon District Council meeting that was held online on December 8.

‘It included a statement that was read out on behalf of a victim of John Humphreys, the former mayor of Exmouth who was jailed in August for 21 years after being found guilty of historic sex offences against two boys.

‘This case was a long and protracted investigation involving historic sexual offences that dated back more than 30 years to the early and late 1990s.

‘The conviction was only possible due to the tenacity, patience and strength of the victims who put their the trust in our officers investigating these matters.

‘Whilst we sincerely hoped that the guilty verdict and strong sentence would allow the victims to move on with their lives, this recent statement does show that more still needs to be done.

‘Therefore, officers will be reaching out to the victims in this case to offer them further support, and if requested, to assist with commencing a formal complaint into how this case was initially handled.’