PORTLAND police detained around 100 protesters who were allegedly smashing windows in a night of "direct action".

Cops threatened to use tear gas and impact munitions as they surrounded the group at around 9.30pm on Friday. 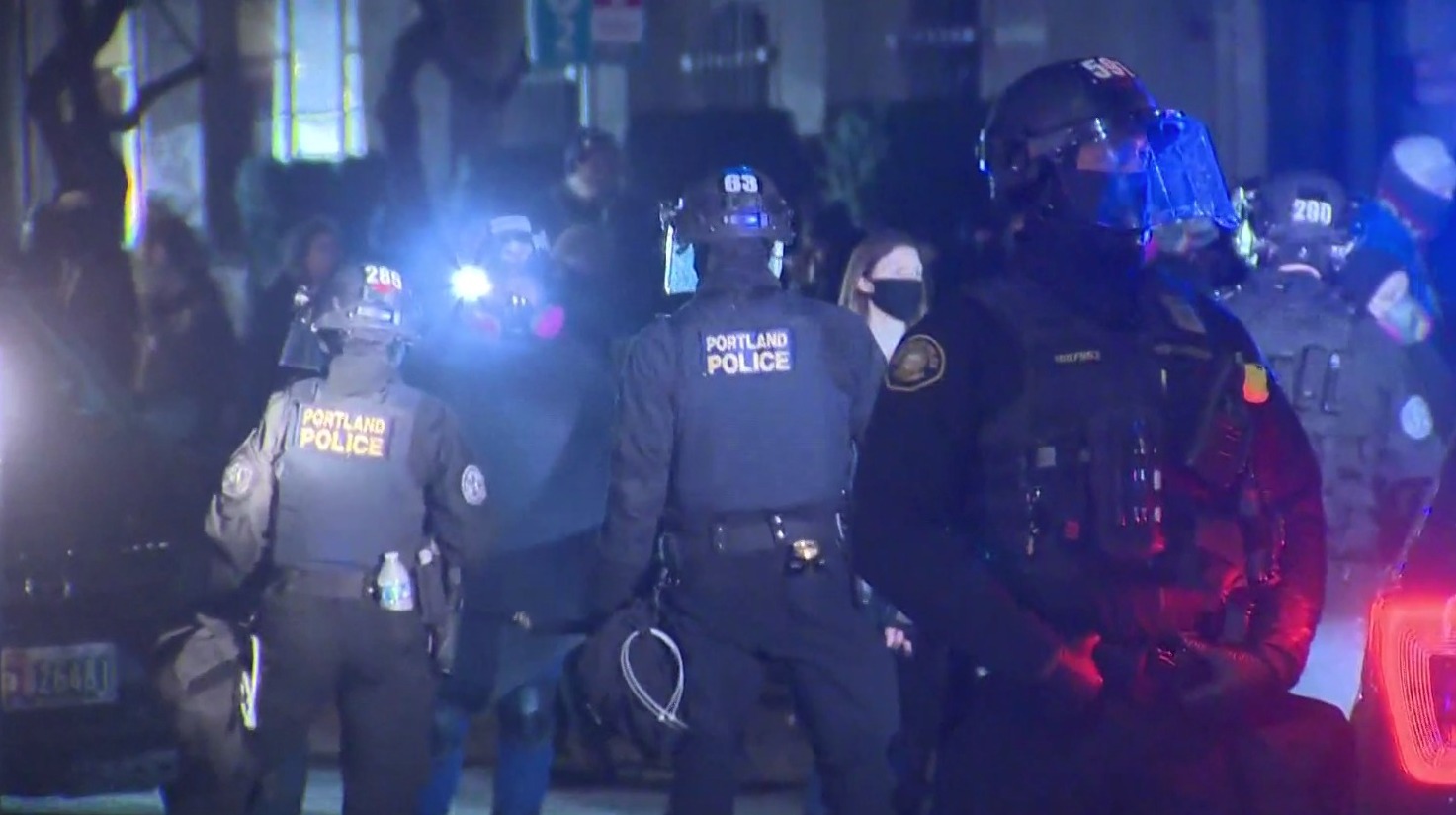 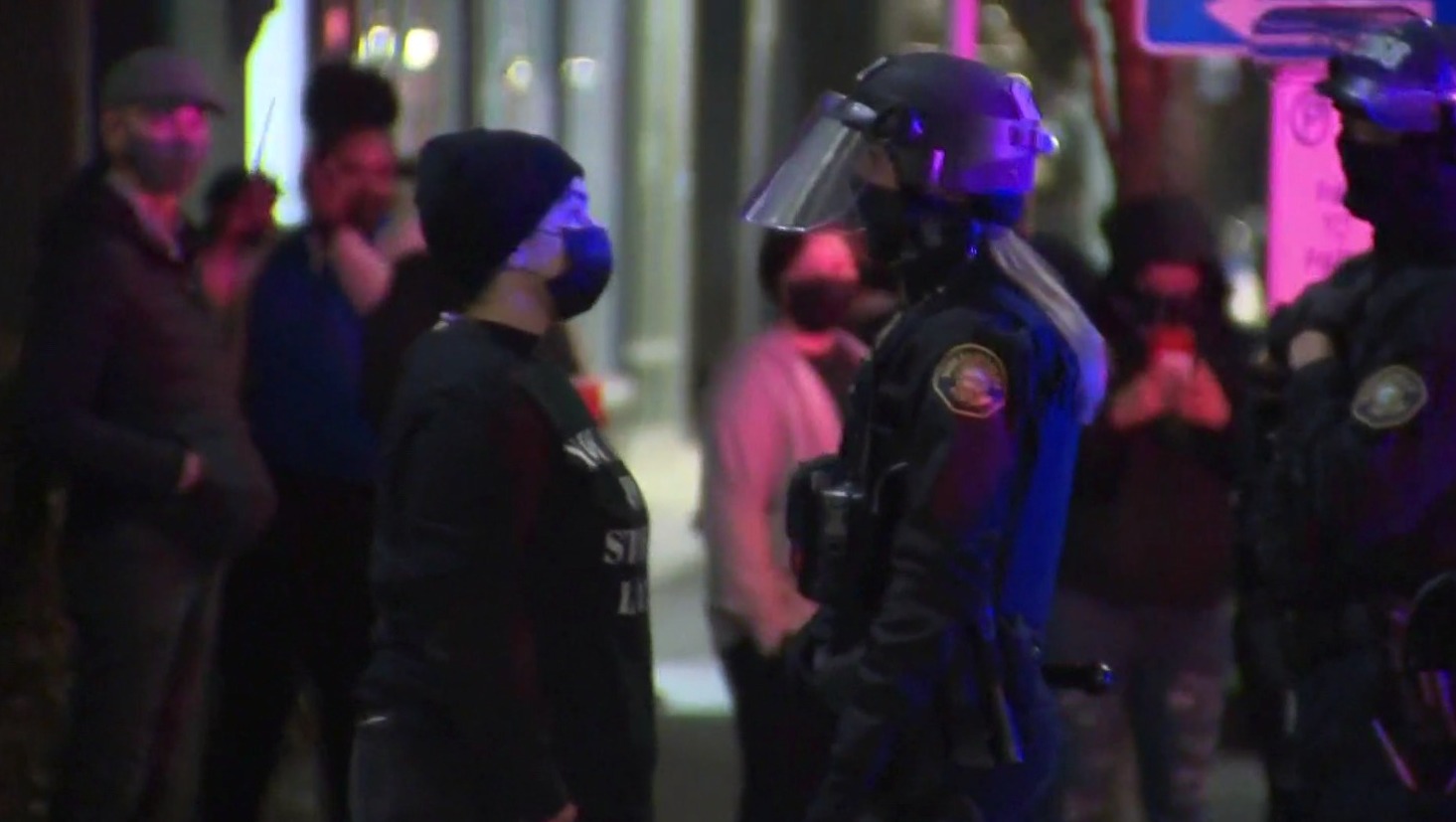 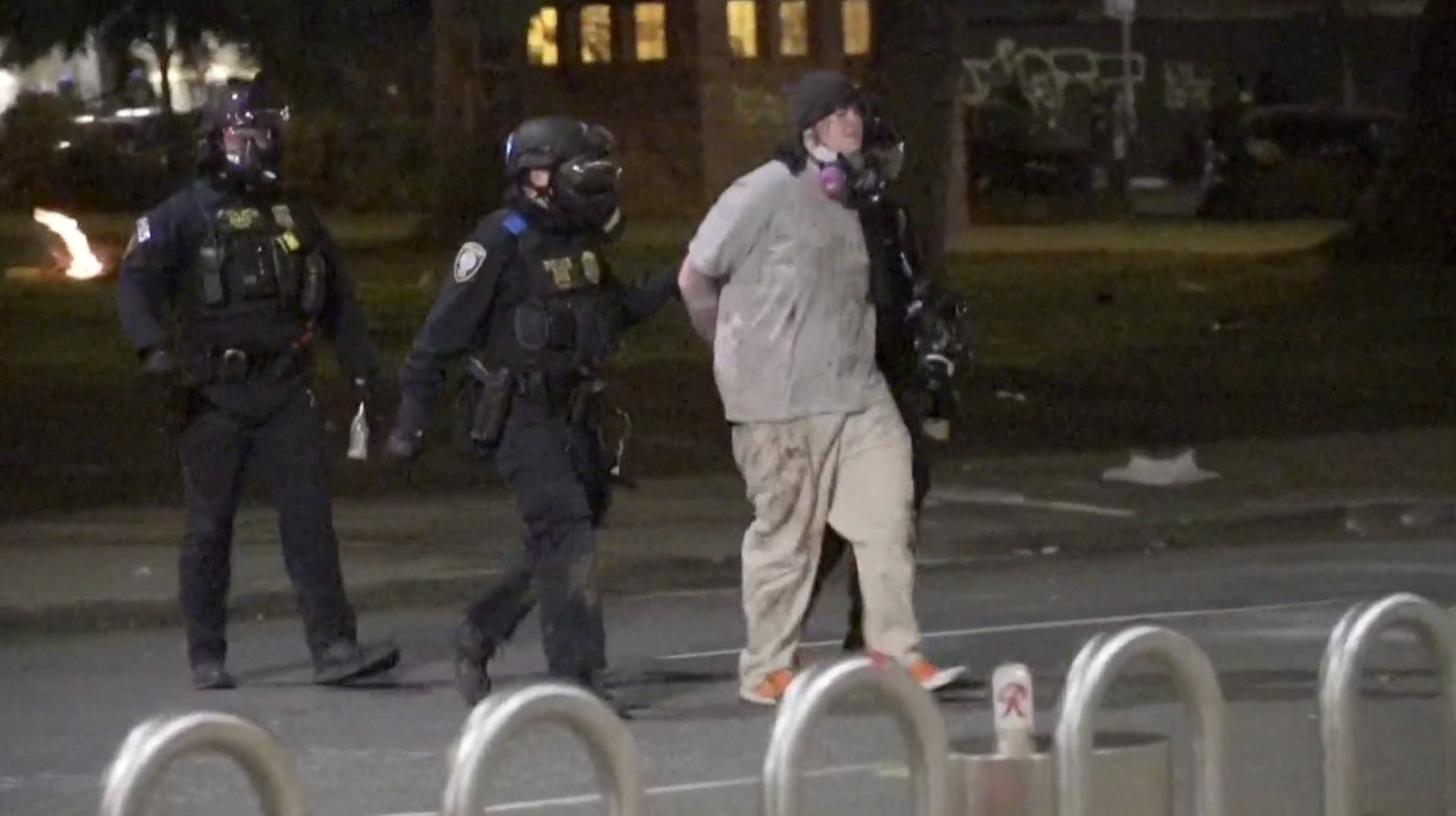 It marked the first time the city's police have used the so-called "perimeter tactic" to deal with the unrest after months of protests in Portland, Oregon, reports Fox 12.

Speaking over a loudspeaker, one cop said: "You are not free to leave. You must stay where you are and comply with officers’ lawful orders.

"If you attempt to leave you will be subject to arrest."

Video showed a large number of officers in riot gear surrounding the group as they were told to sit down as they were all detained.

The department said the detention was "temporary", and the the protesters would be eventually be released one at a time.

Portland Police tweeted: "Failure to comply may result in force being used against you to include, but not limited to, crowd control agents, impact weapons, or tear gas.

"If you attempt to leave the area, you are subject to arrest.

"Do not interfere with officers as they perform their duties. Please sit down and stay where you are until given additional directions."

Cops began following the protesters as they marched through the city's Pearl District before swooping on them. 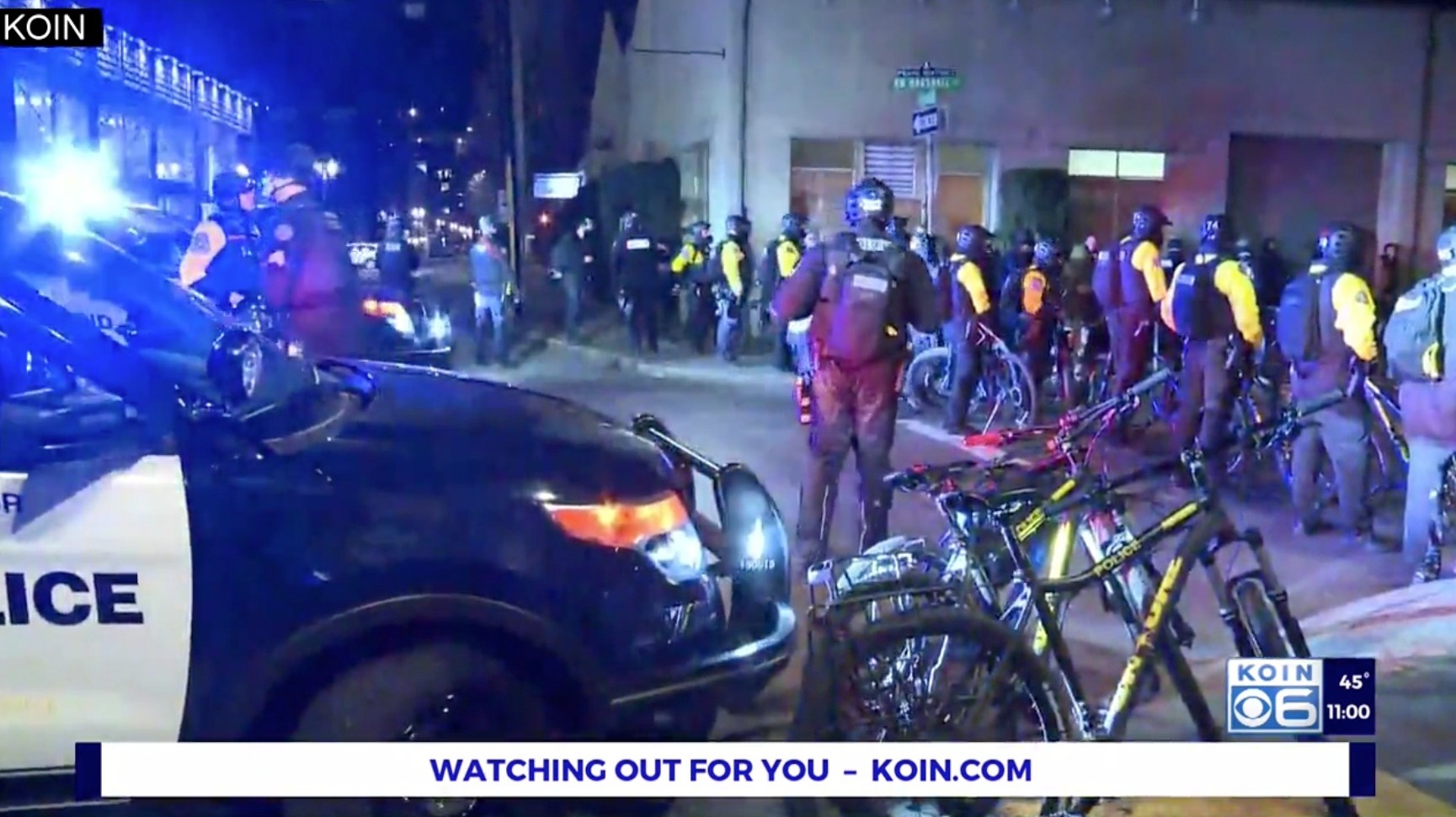 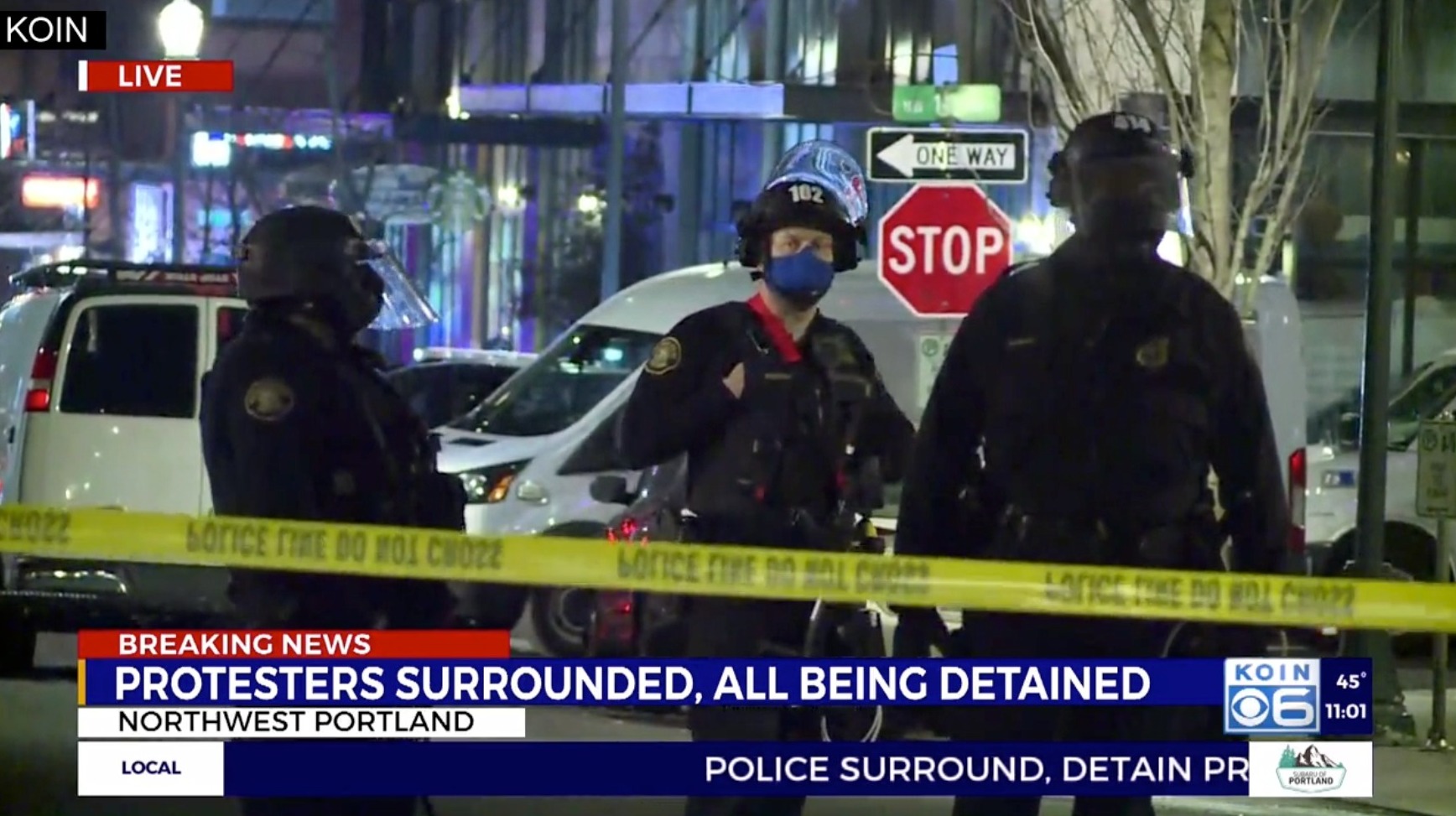 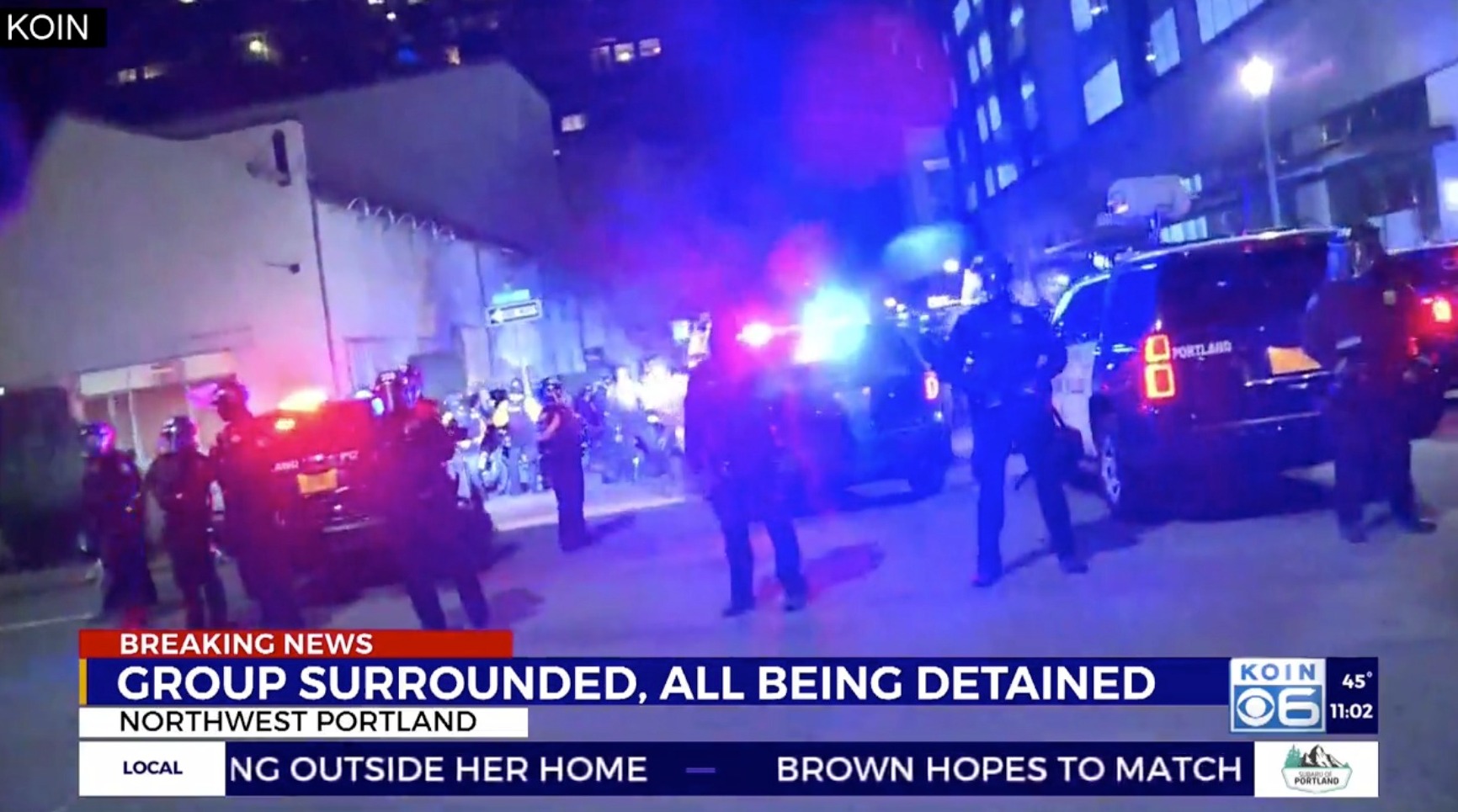 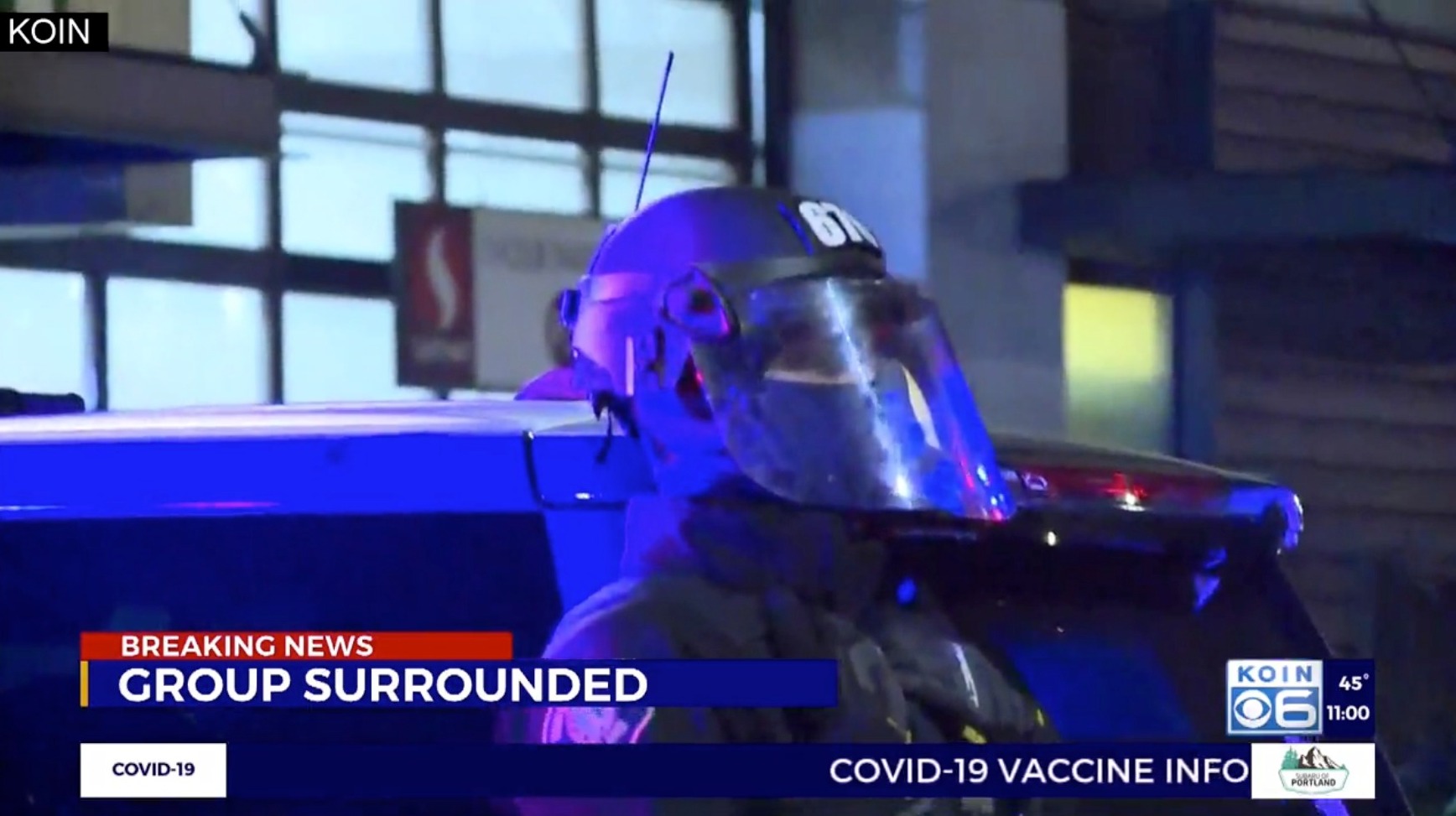 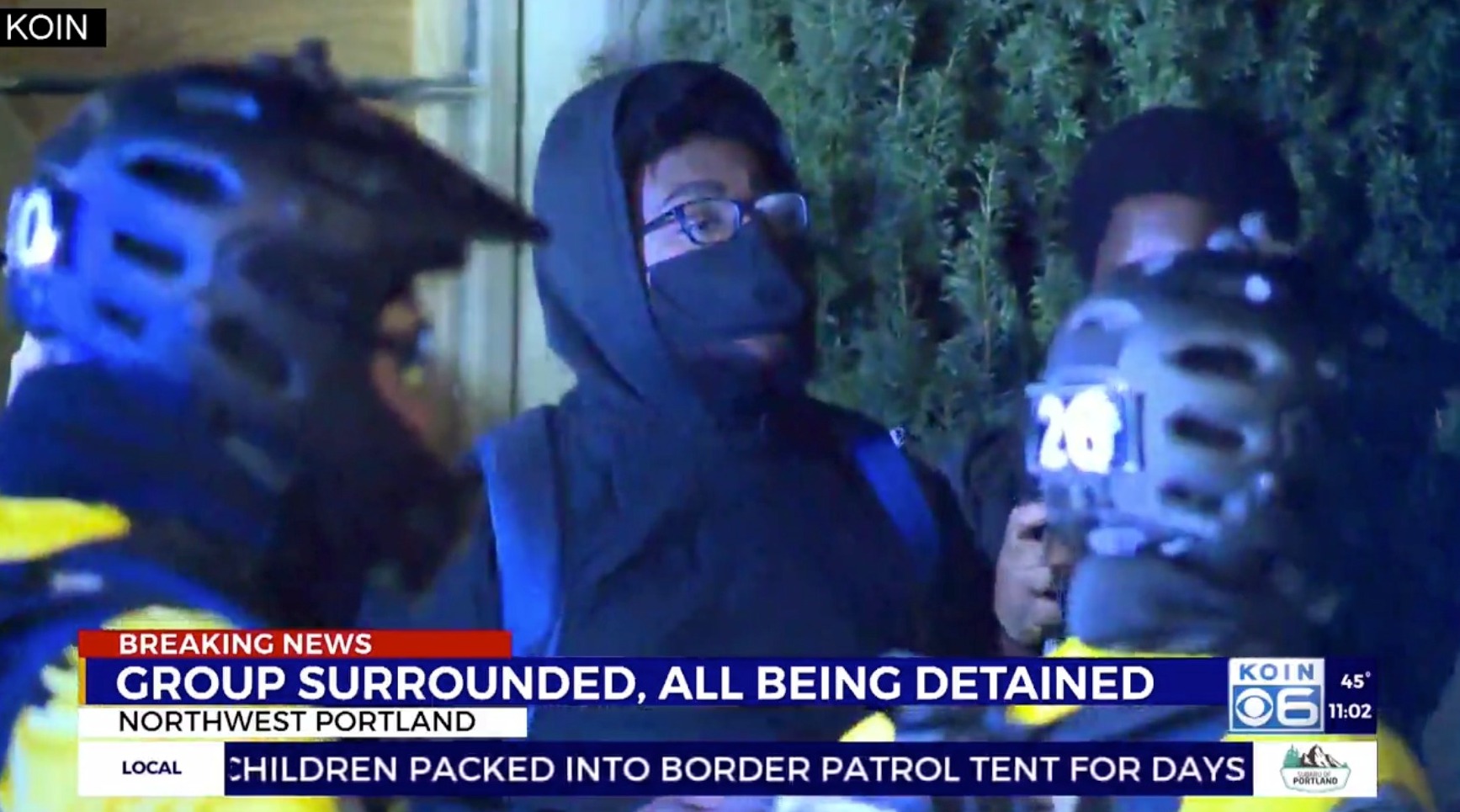 Some protesters had their photos taken by police – but it was not immediately clear why or how many arrests were made on Firday.

Press with credentials and people who were "medically fragile" were allowed to leave from by the cops amid the dramatic scenes.

Bystanders witnessing the scenes shouted both "let them go" and "lock them up" as the divisive scenes continue in Portland.

It comes as the Portland mayor Ted Wheeler asked for $2million in police funding as the city has suffered a surge in gun violence.

Portland became the center of many protests last summer – with at least 100 consecutive nights of unrest, prompting then President Trump to deploy federal forces. 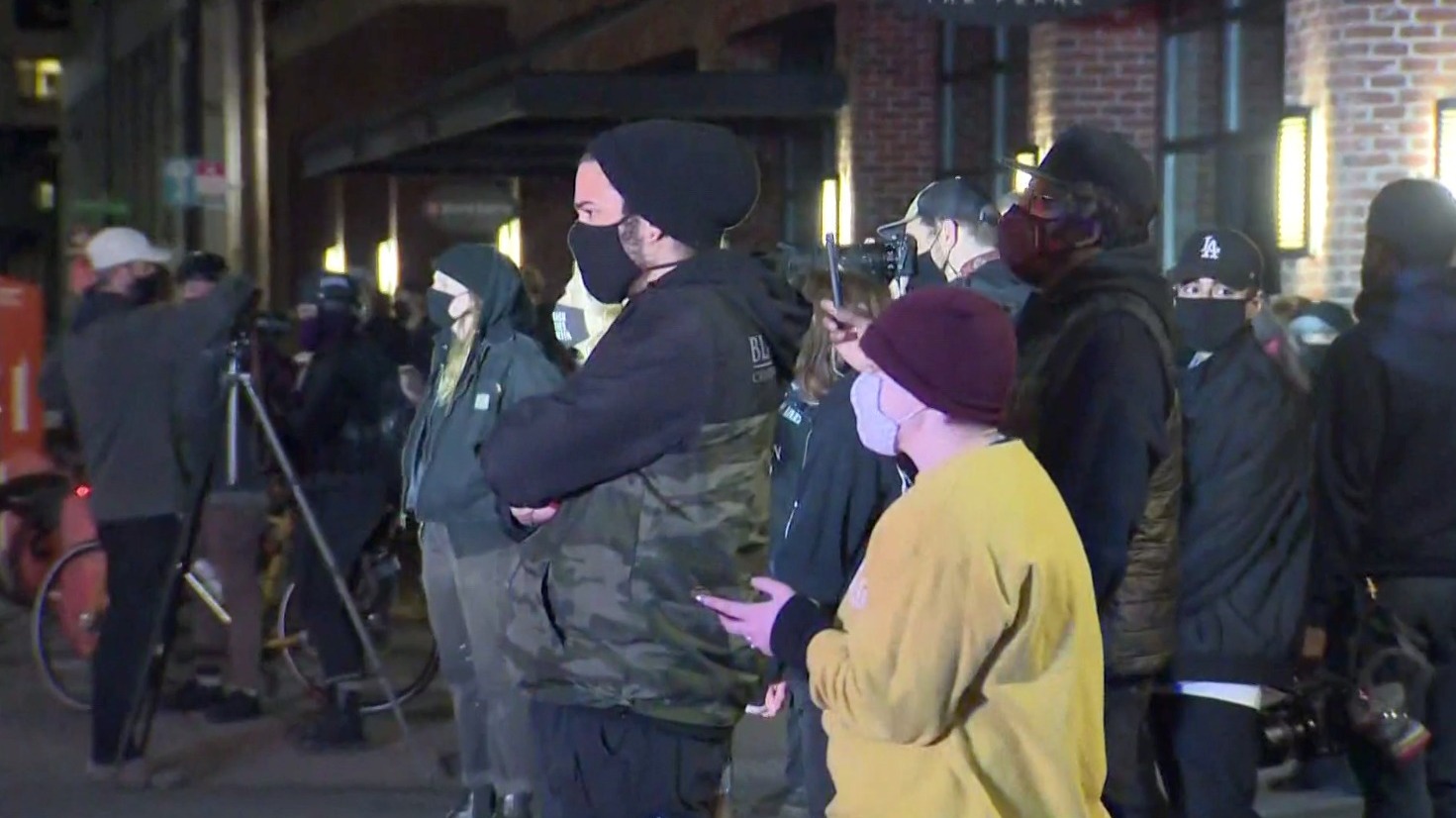 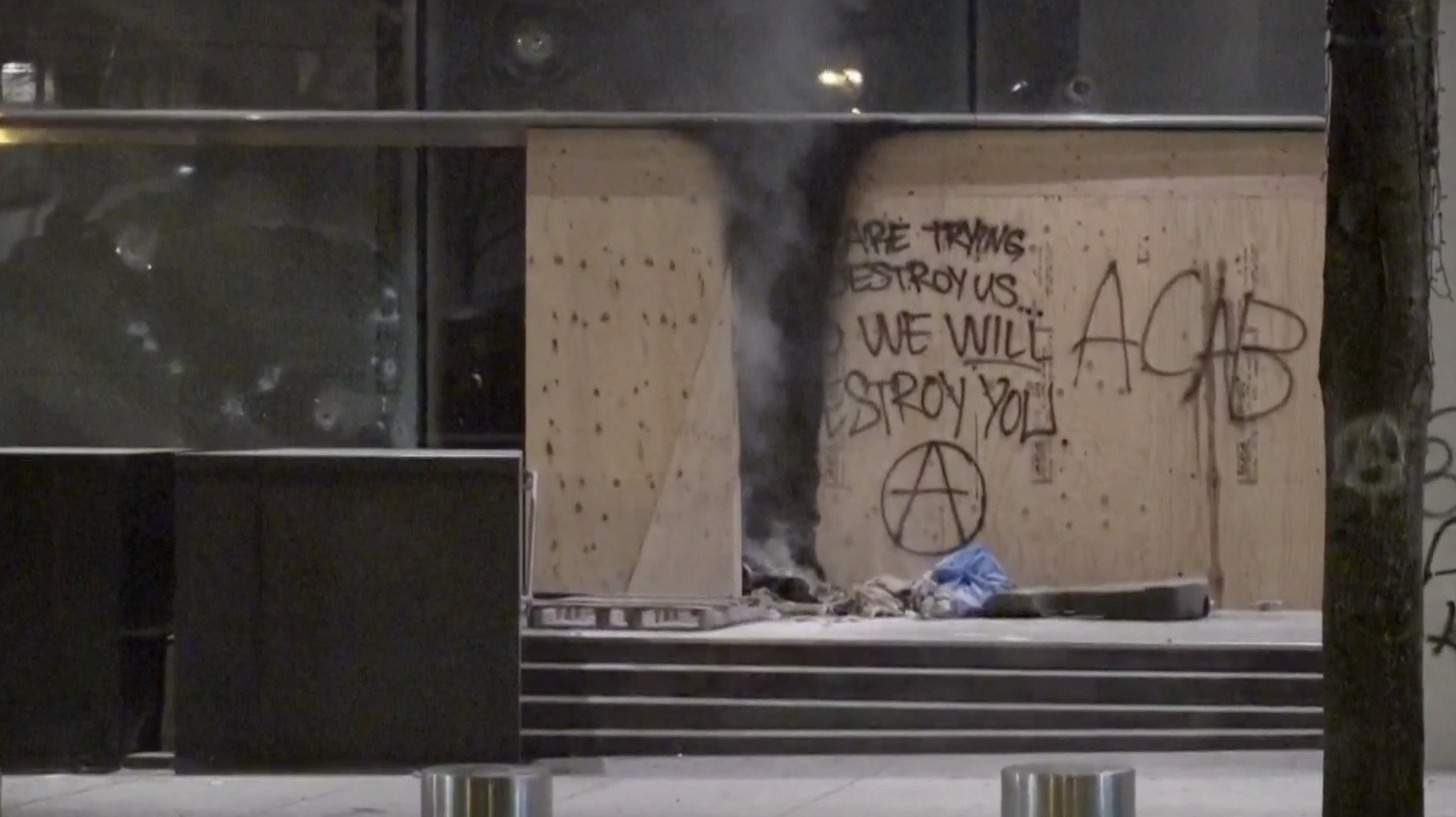 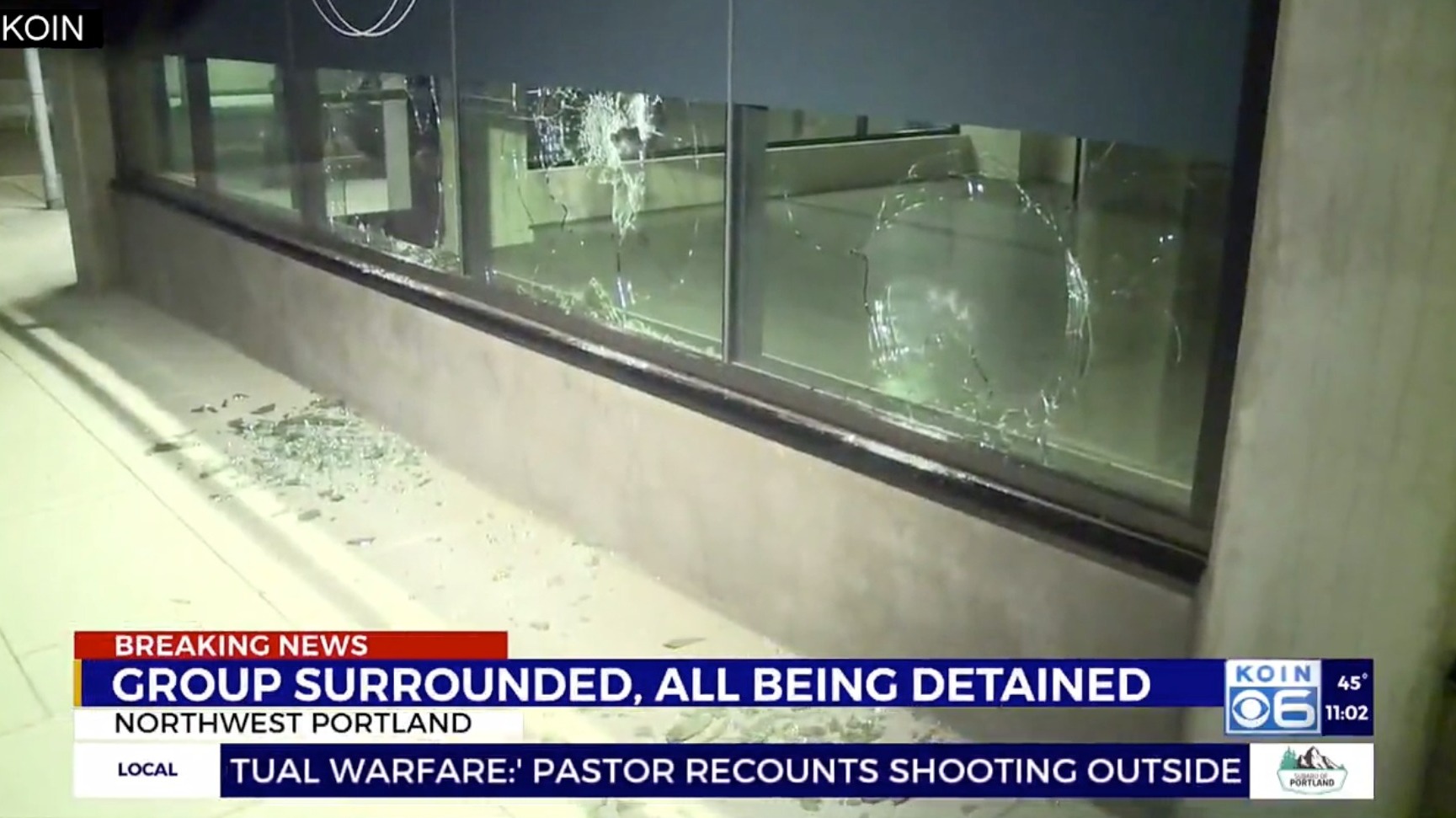 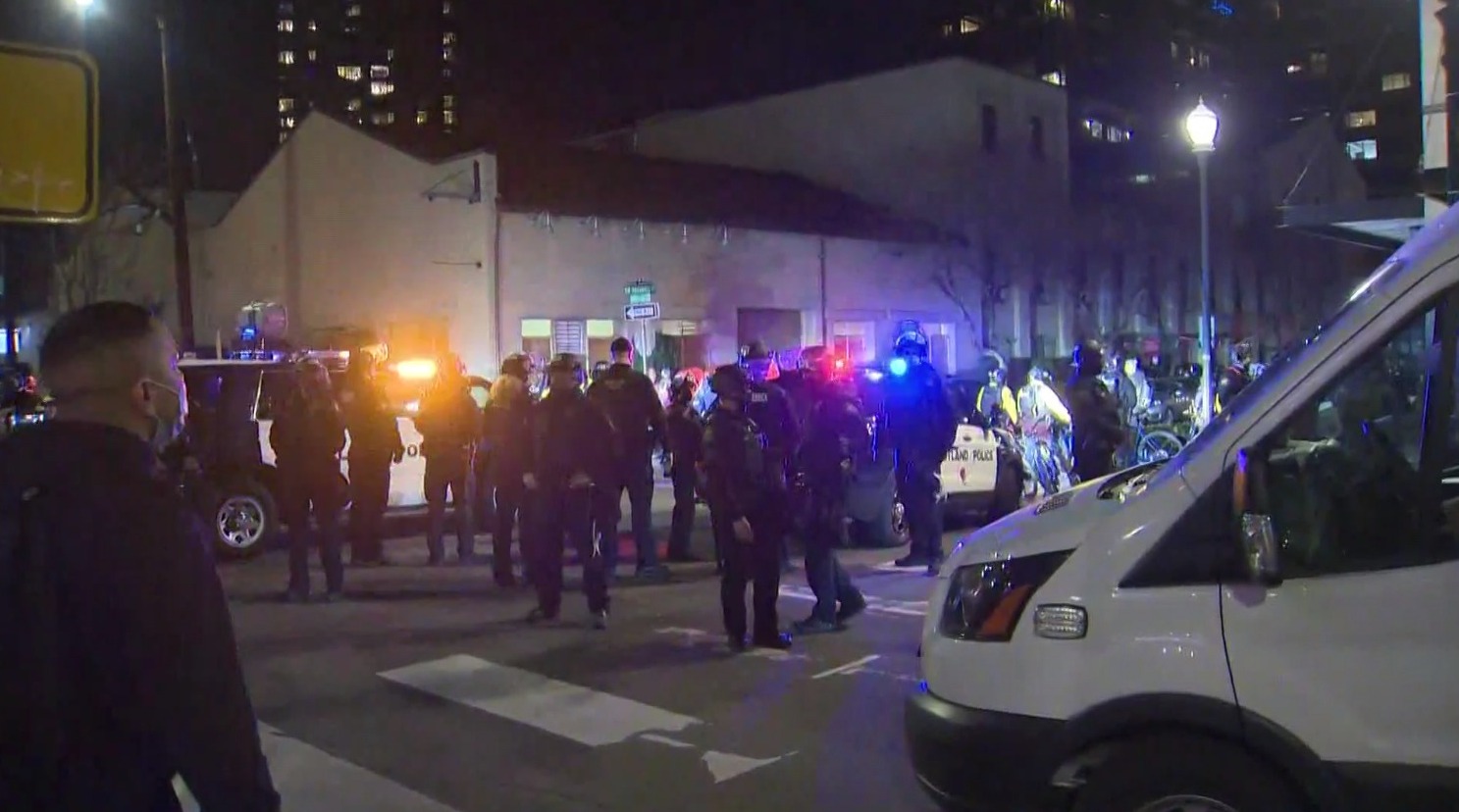 Thursday night also saw clashes as Antifa protesters were blasted with tear gas as they burned American flags and clashed with cops.

Dozens of far-left demonstrators gathered outside the Federal Courthouse for a protest against US Immigration and Customs Enforcement.

The Courthouse was already boarded up with plywood after it was smashed up during weeks of unrest last summer.

The unrest came after a security guard at a Chase Bank branch in downtown Portland pulled a gun on protesters who appeared to be trying to enter the building on Thursday afternoon.

Antifa, meaning anti-fascist, is the umbrella term for a broad spectrum of far-left and anarchist groups who fight against actions they believe to be racist, homophobic, authoritarian and xenophobic.

The group has been linked to violent riots and possible terrorist-style attacks – but it has been claimed by Dems and some law enforcement figures that the threat is overblown.

But the violence in Portland has continued this year, with two people were arrested earlier this month after 150 Antifa activists smashed up a Starbucks and a bank.

It came as The US Sun previously revealed a top police representative believes Antifa operate "like Al-Qaeda" and want America "burned to the ground".