New questions over Biden’s health as the president, 78, stumbles multiple times up the stairs of Air Force One before falling down: Recovers to give a salute before flying to Atlanta

President Joe Biden stumbled multiple times then fell to his knees as he climbed the steps of Air Force One on Friday.

Biden, 78, was boarding the aircraft at Joint Base Andrews just before noon for a flight to Atlanta when he stumbled.

He gripped on to the railing, steadied himself and kept going but lost his footing a second time and then a third.

On the third trip, he fell to his knees.

He got back up then carried on up the stairs before giving a salute at the top then disappearing into the aircraft.

It is the latest in a string of incidents which raise concern over the President’s health and comes a day after he  referred to Vice President Kamala Harris as ‘President Harris’.

Earlier this week, Biden also engaged in a bitter stand-off with Russian President Vladimir Putin which ended with Putin wishing him ‘good health’. 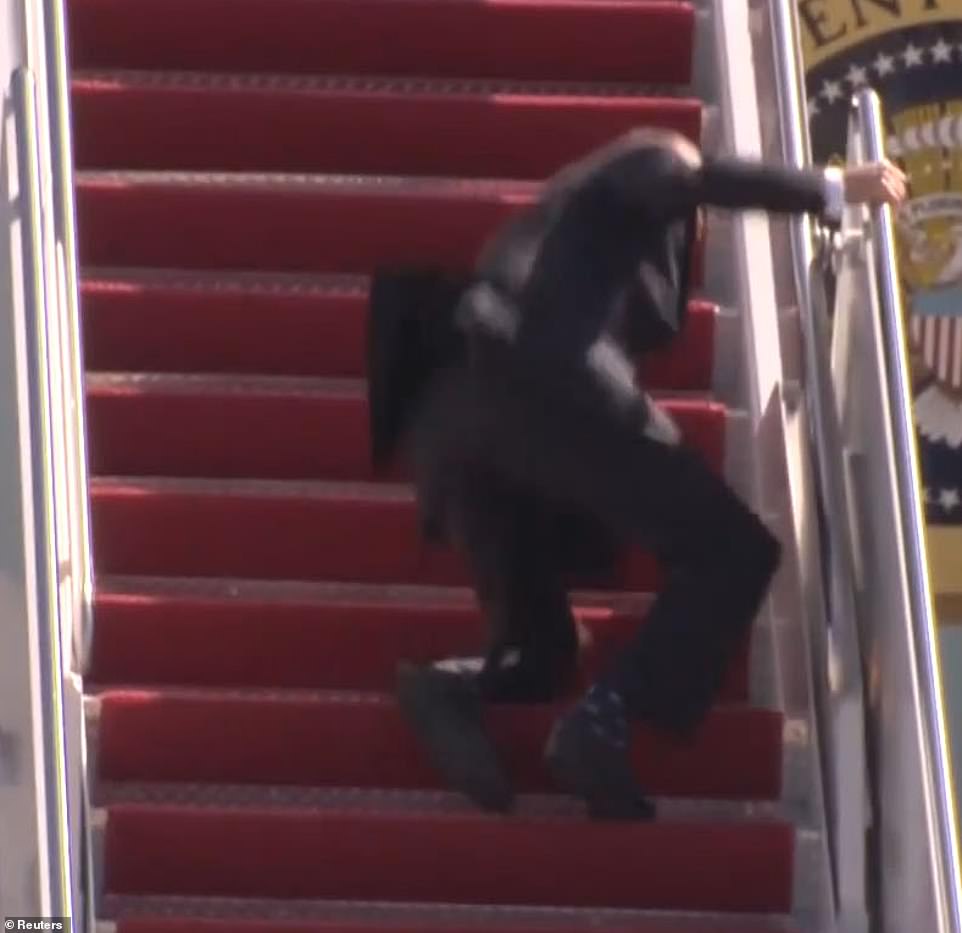 President Joe Biden, 78, falls up the steps of Air Force One on Friday at Joint Base Andrews 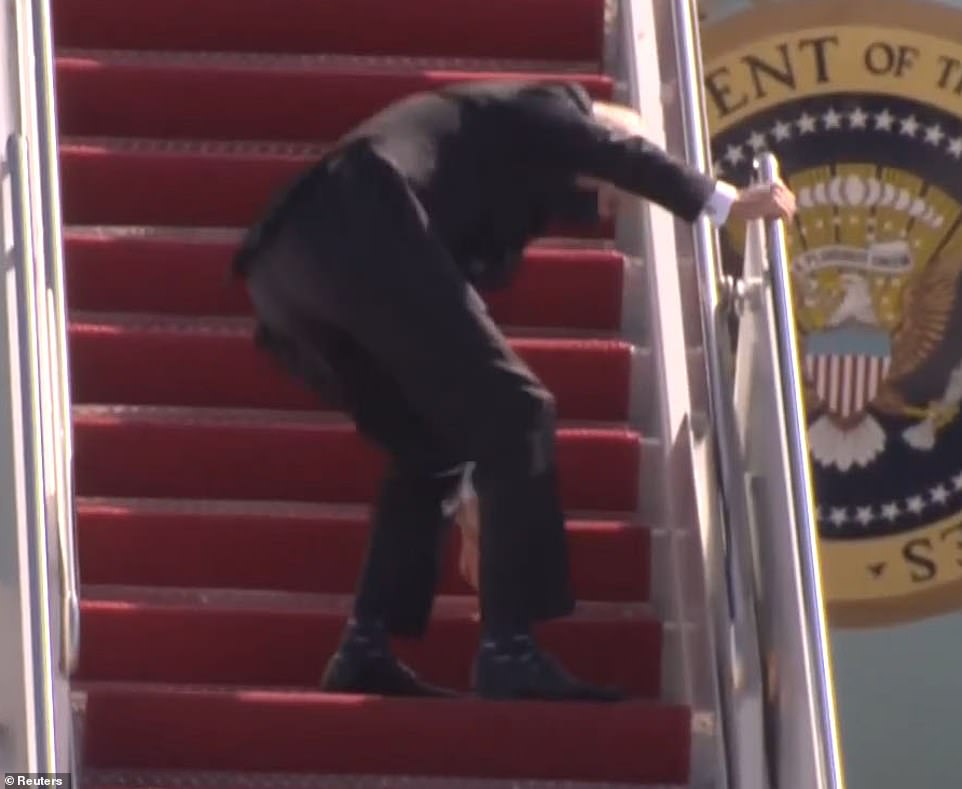 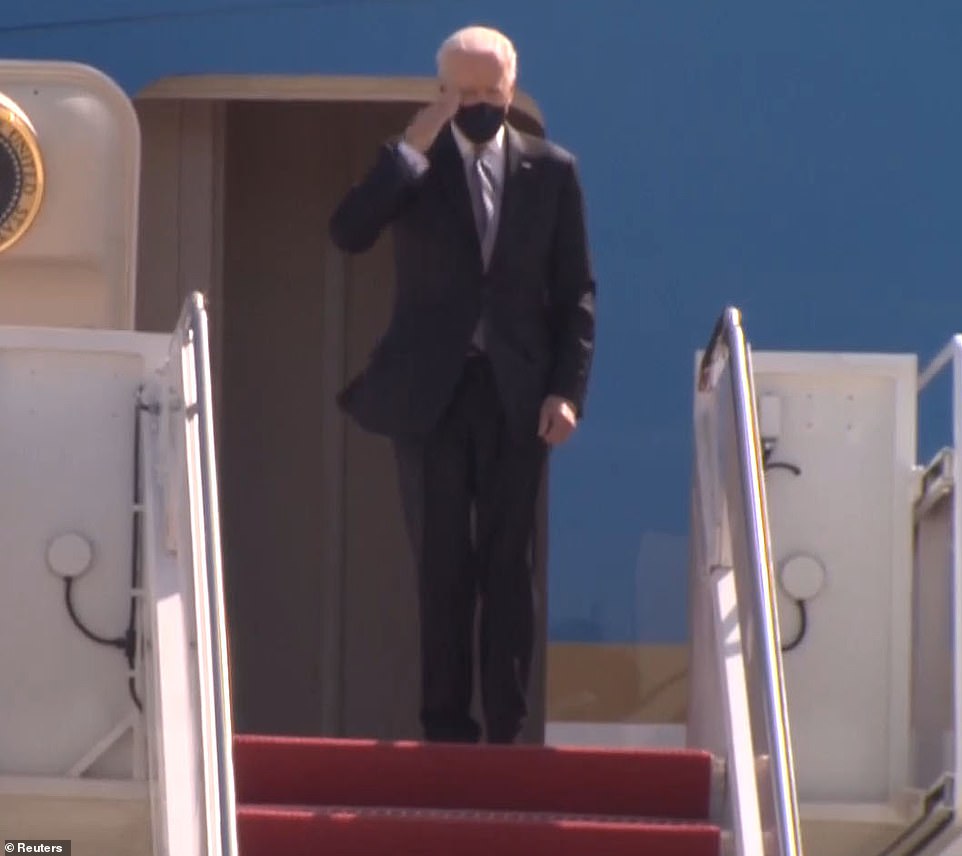 Biden gave a military salute before disappearing into the aircraft

Putin pulled out of an envoy to the US after Biden called him a ‘killer’ in an interview earlier this week. He also said he will ‘pay a price’ for Russia trying to meddle in the 2016 election.

The fall on Friday is the latest in a string of incidents which have raised concerns and questions about the President’s health.

The White House and Biden’s camp routinely play down concerns, insisting he is in good health and fit to lead.

Throughout his campaign, he fought off Trump’s nickname for him – Sleepy Joe.

Until recently, Biden was walking in a boot after breaking his foot while playing with his dog, Major, in November. His doctor at the time said he was otherwise in good health.

In December 2019, there were concerns over Biden’s health, in particular leading up to the 2020 election.

He released medical records which showed he has an irregular heartbeat and high cholesterol, but which described him as a ‘healthy, vigorous 77-year-old. ‘

Some experts questioned whether or not he was as healthy as he claimed.

President Obama’s personal doctor was among them.

‘He’s not a healthy guy. He’s not in bad shape for his age, but I wouldn’t say he’s in outstanding health. Could I guarantee he won’t have issues for the next four years?

‘He has a lot of issues that are just sort of sitting there,’ he told The Washington Examiner at the time.

Biden and Harris are flying to Atlanta to meet with members of the Asian community after Tuesday’s shootings at three massage parlors. They had already planned the trip, to meet with failed gubernatorial candidate Stacey Abrams, before the shootings.