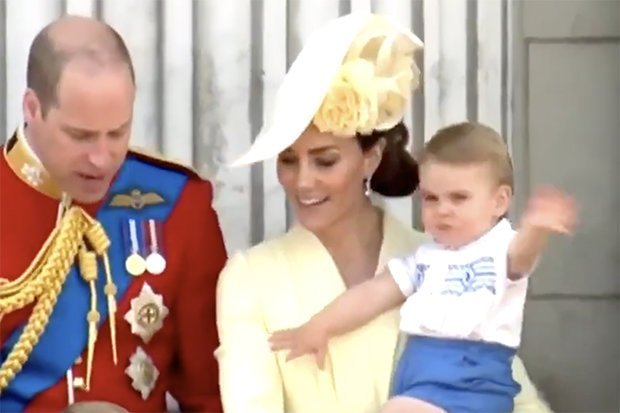 The one-year-old tot couldn’t contain himself as he waved avidly at huge crowds along The Mall during the Trooping the Colour celebrations.

A smiling Kate Middleton carried her baby boy as the Royal Family took to the balcony for the RAF flypast to mark the Queen’s birthday.

But it was Prince Louis who stole the show as he waved at the dozens of aircraft flying over central London.

Crowds reacted with huge cheers as Louis gazed adoringly at the Red Arrows, with Camilla stood next to him.

Meghan Markle also appeared on the balcony as she made her first appearance since baby Archie’s birth.

The flypast marked the end of the Trooping the Colour celebrations which started with a parade in London’s Horse Guards Parade in Whitehall.

Daily Star Online reported how a soldier fall from his horse during the march and had to be rushed away on a stretcher.

The royals returned to the Palace after the parade for the traiditonal appearance on the balcony for the flypast.