A prison guard has been stabbed in the back in a "brutal attack" at the Silverwater Correctional Facility.

Emergency services were called to the prison just after 8am, following reports of a stabbing. Four ambulance crews, including a specialist medical team, were dispatched.

Upon arrival, they treated a woman for stab wounds to her back. The incident occurred in the mental health section of the prison. 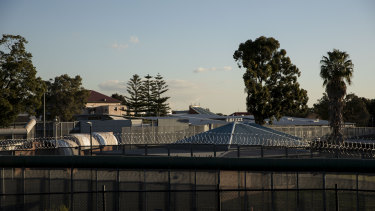 A prison guard has been taken to Westmead hospital after she was stabbed in the back by an inmate. Credit:Dominic Lorrimer

The woman was taken to Westmead Hospital in a stable condition.

“It was a brutal attack," he said.“Paramedics worked to stabilise the patient before getting her to hospital where she is expected to undergo further assessment and surgery.”

“Stabbings, particularly like this, are taken very seriously – we can treat the wound as we see it, but it’s the damage you can’t see that becomes the concern.”

The most important news, analysis and insights delivered to your inbox at the start and end of each day. Sign up to The Sydney Morning Herald’s newsletter here,  The Age’s newsletter here, Brisbane Times‘ here and WAtoday‘s here.

Devine: No honor in Prince Andrew’s self-pity over Epstein friendship