A derelict wasteland beneath one of Melbourne’s busiest roads will be transformed into a trendy hotspot under council plans to make better use of the city’s undercrofts.

Deputy Mayor Nicholas Reece says the city is drawing inspiration from New York, Toronto and Berlin to renew the areas under railway lines, motorways and other infrastructure that he describes as “urban blight”. 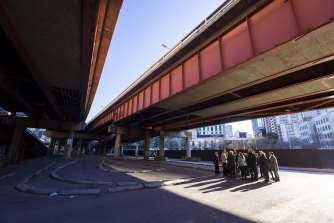 A panel is examining how to transform the space beneath Kings Way.Credit:Wayne Taylor

“In Melbourne we calculate that there is well over 20 kilometres of undercroft, which is currently a desolate wasteland,” Reece said.

That’s about 2 million square metres, or 100 MCGs of space, he said.

First on the agenda is the site under Kings Way on City Road at Southbank. 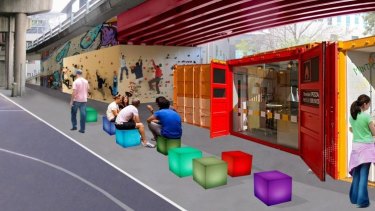 A concept design for the space under Kings Way, as an example of what is possible in such spaces, from the council’s City Road Masterplan.Credit:City of Melbourne

“We’re still in the ideation phase and that’s definitely a priority,” the deputy mayor said.

The council aims to complete the design and approval phases and award the tender for the space under Kings Way this financial year.

The final upgrade is due to be completed by the end of the 2023-24 financial year.

The space is currently home to dumped shopping trolleys and graffiti, amid the roar of cars and a nearby tram stop.

A design excellence advisory committee including architects, town planners, designers and community members has been discussing how best to revitalise the area.

There are suggestions for basketball courts, bouldering walls and integrated furniture and trees to make it a welcoming, usable location.

Among the committee members is architect Karl Fender who designed the Eureka Tower and Australia 108 tower, among the tallest in the city.

He said renewing industrial leftovers such as undercrofts could be a “blessing for Melbourne”. 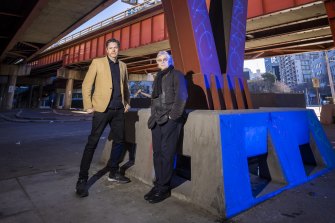 “Great cities are cities that have surprises and I think these spaces are real surprises,” Fender said.

Combatting sound from the overhead road, preventing vandalism, and ensuring safety and access to the space were among issues being considered by the committee.

One way to help tackle vandals is to “embrace them”, according to Fender.

“The famous saying, if you make your enemy your friend, you don’t have an enemy. 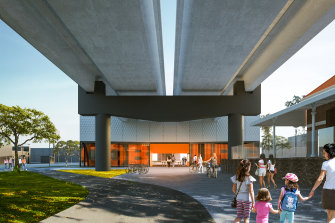 An artist’s impression of the Coburg station southern undercroft.

“So embrace them, give them a place so they can do their tagging here and with freedom, and maybe that diverts them from ruining other spaces.”

The deputy mayor said other options would be to include CCTV, lighting technology and irrigation to keep the areas attractive and safe.

Another challenge facing the project was working with a variety of authorities to ensure access, he said.

Ecologist Dr Holly Kirk, who is part of RMIT’s Centre for Urban Research, backed the regeneration of neglected spaces to improve the lives of people in rapidly growing, densely populated cities.

“If there’s any way that we can maximise people’s access to small patches of nature, or places where people can go and play … safe kind of routes through cities that may make them separate from traffic, then that’s a really positive win for everybody,” she said. 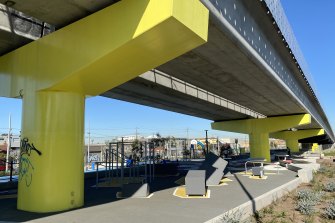 The sky rail underpass at Moreland train station, which has a skate park and bike track.Credit:Michael Bachelard

Kirk said common issues such as noise and pollution in these spaces could be tackled by encouraging greenery, which also introduces biodiversity.

“There’s heaps of evidence now that shows having really well-designed and nice, diverse, urban, green infrastructure can help to make a space more welcoming,” she said.

She said it was important to engage with the community to ensure the new spaces met their needs and did not remove spots such as skate parks that were already in use and popular.

Reece said other areas flagged for the renewal project include under the M1, and greening parts of the Moonee Ponds creek under the M2.

The Albanese government promised $5 million to help with that part of the project, he said.

The council has put $9.3 million aside to develop public open space in the city and this includes the cash for the undercroft project.

Your essential guide to the best things to see and do in and around the city. Sign up to our Culture Fix newsletter here.

The Dreidel Is Skewered in This Hanukkah Treat