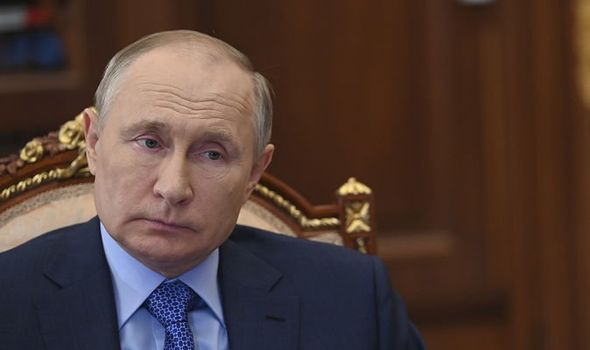 While using Russian gas on a short-term basis is “relatively risk free”, however, the UK and Europe cannot afford to trust Vladimir Putin for any long-term projects.

It follows a stark warning by defence secretary Ben Wallace that the Russian premier was using its energy supplies as a weapon against Western interests.

“We see some countries use energy, migration, cyber and organised crime as weapons,” he said.

And last night the Russian premier retaliated by firing a shot across Boris Johnson’s bows, calling those threats “statements that are aimed at absolute populism” and asking the PM if he expected Russian gas “for free”.

Gas prices have risen eightfold since January for a myriad of global factors of which economies emerging from the Covid pandemic is just one.

Russia, which provides 40 percent of Europe’s gas – mostly natural – is accused of deliberately keeping prices high by slowing down exports.

Although Britain only relies on Russia for only three percent of its natural gas imports, it is nevertheless affected by the knock-on effect of rising global prices. Half of the UK’s energy needs are home-grown, but slowing wind turbines due to the lowest wind speeds for 60 years have placed a greater emphasis on gas imports.

While experts last night agreed that Russia’s stark winter forced its state-owned Gazprom to prioritise domestic demand, they noted that Putin’s clear leveraging of the crisis reinforces his reputation as an unreliable partner.

This was born out by Putin’s spokesman Dmitry Peskov, who yesterday angrily rebuked the UK’s stance.

“Russia is not restricting anything,” he said.

“If the Europeans, including Britain, sign a contract for more gas, they will be supplied with more gas.

“Or does Britain want Russia to ship unlimited amounts of this gas for free?”

Still subjected to sanctions over its invasion of Crimea, cash-starved Russia wants two things: long-term gas contracts with Europe and the switching on of the controversial NordStream2 pipeline with Germany.

“There is a widespread hope in Europe that we’re going to get out of the gas business to release ourselves from reliance on Russian gas. Even though it won’t come soon , this is the reason Europe won’t sign long-term contracts,” said energy expert Nikos Tsafos at the US-based Centre for Strategy and International Security.

“And, though many warn against the security threat of allowing NordStream2, what this crisis shows is that Russia has market power with or without it.”
The real risk of allowing NS2 isn’t to the EU, which will gradually use it less, but to Ukraine, through which Russia’s pipelines currently pass, giving Kiev sizable revenues.

“Putin simply cannot now afford to cut off supplies. It needs Western revenue as much as the West needs its gas.

“We need to be as ruthlessly pragmatic as possible. “

Dr Jade McGlynn, of the Henry Jackson Society added: “Russia does need the money and wants to come across as a reliable supplier to Western Europe. This is an opportunity and they will try to use it to increase their standing. So they have more to gain from proving to be reliable.

“Britain is ever pragmatic and we do businesses with unsavoury regimes.  On a short term basis, using Russian gas is a relatively low risk proposition.

“But this doesn’t translate to allowing Russia to have five-10 year long term gas contracts.

“What we’ve seen from the crimes that Russia has been willing to commit – even on UK streets -is that Russia is not a partner that we should be engaging any more than is necessary.

“Anything that means increasing our dependence on the Russian government, that gives them real power, is bad for British and European interests.“

Julian Assange will stay in prison despite finishing his sentence